A Brew report about multi-million dollar errors in the billing of commercial water customers in Baltimore brought swift condemnation today, with many calling the fact that major city institutions and companies can go years without paying sizeable water bills an equity issue.

“This is not a political issue. It is about affordable access to a basic human right. While the city is raising water rates for residents by 30%, we’ve left millions uncollected from wealthy institutions and developments,” state Senator Mary Washington, a 2020 mayoral candidate, said in a statement.

“It is enraging and unacceptable that this has happened, particularly while residents have been overburdened and even lost their homes,” Washington added.

Her comments came in response to Brew reporting showing that the city has been quietly grappling with longstanding and in some cases huge uncollected bills, including one to an address on the Johns Hopkins East Baltimore campus that was for $4.2 million.

Johns Hopkins Medicine has not yet provided a response to questions from The Brew about the Skip Viragh Outptient Cancer Center bill.

• EXCLUSIVE: Baltimore is not collecting millions of dollars from commercial water users (2/28/20)

“This reporting confirms what I and Councilman Kris Burnett suspected – that DPW has under [former Director] Rudy Chow shown ineptitude when it comes to delivering quality services to the citizens of Baltimore,” Scott said.

“The fact that we cannot collect accurate water bills is embarrassing,” he continued. “This show the administration’s lack of leadership.”

“We knew there was no way it was limited to the Ritz Carlton.” – Brandon Scott.

Scott is running for mayor in the Democratic primary, as is Mayor Bernard C. “Jack” Young.

The Council has scheduled a March 4 oversight hearing at 5 p.m. in City Hall on commercial water billing issues.

That hearing was called following reports in October that the Ritz Carlton Residences, a waterfront condominium community, hadn’t been billed for city water for 12 years.

“When @CouncilmanKB and I called for an oversight hearing on erroneous water bills, we knew there was no way it was limited to the Ritz Carlton,” Scott tweeted today.

Mayor Young last year called the failure to properly bill the Ritz Carlton “shameful” and ordered an audit. But a spokesman for his office recently told The Brew it is not expected to be released until May or after the mayoral primary.

“We will be asking for that information at the hearing,” Scott said. “We want to see it now.”

Tip of the Iceberg

In the meantime, some are calling for pause in water rate hikes until the city can assure accurate and equitable billing.

“We should halt any rate increases until city government fully understands the depth of the dysfunction, and we should demand full transparency on this issue that, somehow, continues to plague our city,” Washington said. 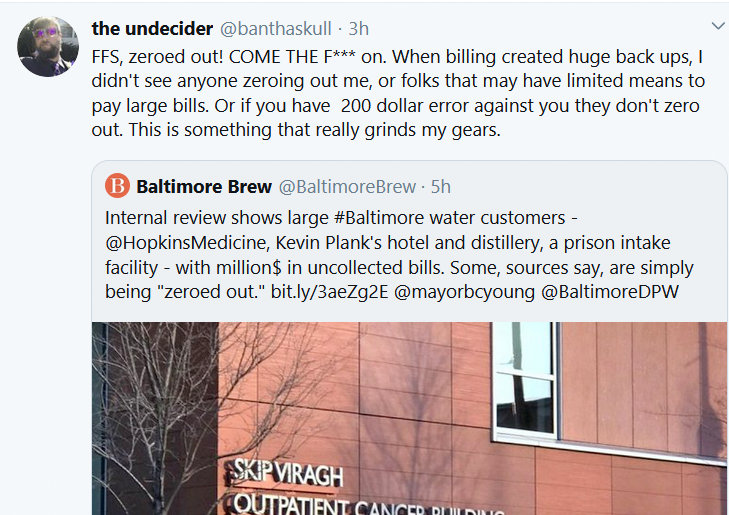 Odette Ramos, a City Council candidate in the 14th District, said the disclosures point to the need for a major billing overhaul.

“A new water billing system is needed!” she tweeted. “This is outrageous and is just the tip of the iceberg! As I’ve reported before homeowners are also having trouble with water billing!”

The enormous underbilling does not imply revenue lost to the city’s general fund since water bill payments go to a separate dedicated enterprise fund.

However, if corrected, it could arguably head off future increases in the municipal water rate, which has risen every year for the past two  decades.