The Board of Estimates unanimously approved a contract for Erin Sher Smyth to provide 160 hours of consulting services for the sheriff’s office at $150 an hour.

There was no discussion by board members as the item was passed today as part of a blanket approval of more than 50 city expenditures.

The contract comes on the heels of a bigger contract ($46,800) given to Kimberly Morton, retired chief of staff for former Mayor Jack Young, to provide the same consulting services – namely, to “prevent waste” and “enhance administrative operations” on behalf of Sheriff John W. Anderson.

Anderson is under challenge by Sam Cogen in next month’s Democratic Party primary.

“I know that internal resources exist that, with new leadership and better management, the sheriff’s office won’t have to hire $150-an-hour consultants in the future,” Cogen, a retired assistant sheriff, said today.

On an hourly basis, Smyth will be getting about 2½ times her former city salary. As in the case of Morton, the BOE waived hourly pay limits for retired and former employees described in the Administrative Manual.

Smyth was removed from the procurement office after the IG report – and was later blamed for an “oversight” that cost the city $7.5 million.

In that case, Smyth had urged the BOE to approve a contract with a Chicago parking garage company that cost just $36 in “management fees,” apparently unaware that “operating fees” to be assessed by the company would add millions of dollars more over the life of the award. 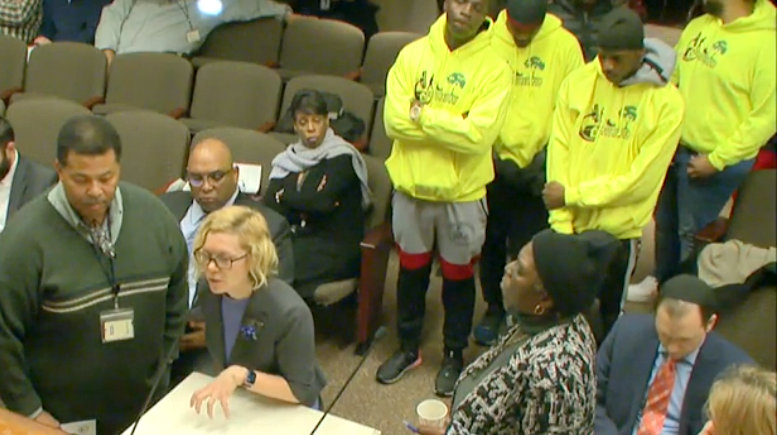 Erin Smyth speaks at a January 2020 BOE meeting regarding a potential contract for squeegie workers. A month later, following a critical IG report, she was removed as head of the procurement office. (CharmTV)

“Answered to our satisfaction”

Scott, who cites integrity, especially in procurement contracts, a top goal of his administration (here and here), did not respond.

Neither did Mosby, who is personally and politically close to Morton, who helped advance his wife, Marilyn Mosby, in the Baltimore state’s attorney’s office she now heads.

“In preparation for today’s BOE meeting, my office asked for specifics about the contract’s term, rate and not-to-exceed dollar amount. The reasoning provided by the Department of Human Resources and the Sheriff’s Office concerning this particular employment contract was sound and the questions we asked were answered to our satisfaction.

“At the end of the day, this was a personnel decision made by the sheriff, who is an elected official in his own right – one who reports to the people of Baltimore City, not to the mayor, or the rest of us on Board of Estimates,” Henry said.

“Thanks to our efforts to increase openness and transparency in the comptroller’s office, residents can be more aware of the decisions elected officials are making, and factor them in when making their own choices during future elections.”