In a 1985 television news report preserved as a YouTube video, the motorists’ eyeglass styles were big, the young boys darting into the streets with squeegees wore knee socks and the mayor was William Donald Schaefer.

But then just as today, Black youths trying to wash windshields for money at downtown intersections were a subject of intense civic debate in Baltimore.

After a City Council vote (that split along racial lines) to ban the practice outright, Mayor Schaefer had brokered a compromise, the TV report said.

The youths were instructed in “how to wash windshields courteously,” given special “I am a trained squeegee kid” buttons, and were allowed only to approach cars that pulled over into a designated area in the curb lane.

It was a bust.

On the first day, an hour and ten minutes passed before the first car stopped in a designated lane.

“It’s only been three people that have pulled up,” one boy glumly told the reporter. “You ain’t gonna make no money like that.”

Fast forward 37 years during which the ban was ignored, the practice resumed, fresh complaints were made, more news stories were written, additional plans were launched and, last July, a bat-wielding motorist was shot and killed.

Now the latest mayor is trying again to curb squeegeeing.

Last week, Brandon Scott announced that streetcorner window washing will be banned in six “high-traffic” corridors in the city – including the squeegee-ers’ favorite downtown spots.

After receiving two warnings, the mayor said, anyone caught squeegeeing in these zones will get a citation.

Along with the edict came this sweetener:

The Scott administration will coordinate a multi-million-dollar, public-private initiative to connect the youths with social services and job training programs in an acknowledgment of squeegeeing’s root cause: lack of opportunity in a historically redlined city with vast areas of concentrated poverty.

Squeegee workers who participated in Scott’s four-month “Squeegee Collaborative” planning process were brought in to hear the final recommendation of the administration.

How did they react to the news that the plan would mean, come January 10, 2023, squeegeeing is to be illegal, and they and their customers could be ticketed?

“There was an audible gasp,” recalled Faith Leach, deputy mayor of Equity, Health and Human Services. “Some sitting back in the chair, like ‘Aww man!’”

But she said after some discussion the squeegee workers came around, “Because these young people want more. And that’s what we talked to them about, right?

“You can stay hustling on the corner and make a couple of dollars here and there squeegeeing for hours. Or you can be on a more productive career pathway.” 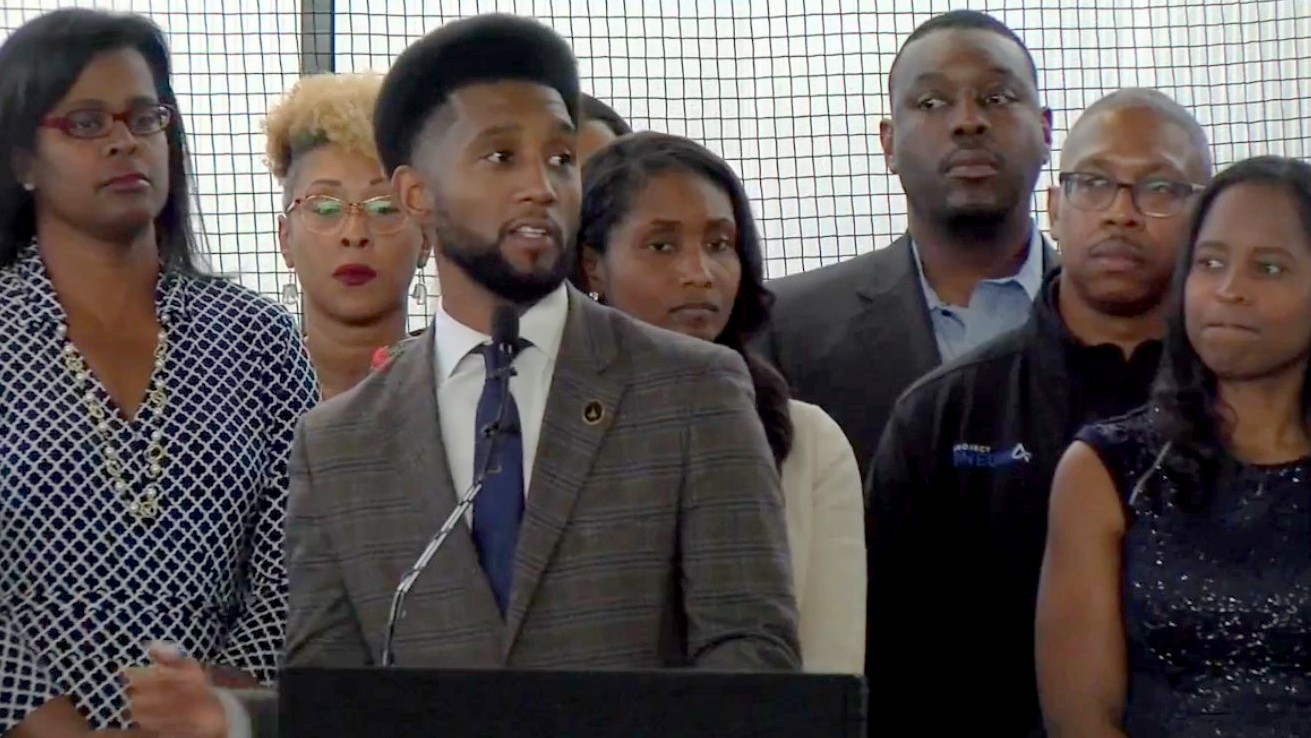 Brandon Scott answers reporters’ questions at the announcement of his Squeegee Collaborative plan. Deputy Mayor Faith Leach is behind him on his left. On his right are mayoral aide Shantay Jackson and Baltimore Schools chief Sonja Santelises. (Facebook)

Leach, the Squeegee Collaborative’s co-chair, said at the press conference Thursday that members were aware of the issue’s history, having reviewed “six prior plans, news articles and reports going back to the 1980s.”

Scott hit on that theme as well, saying the difference with his approach is its commitment to tackling what drives people to the corners:

“This is where previous attempts at resolving this issue have failed.”

A central component of Scott’s “action plan” is the hiring and training of service navigators and mentors to provide intense case management and guidance to squeegee workers seeking help from city and private agencies.

A new program will connect youth to workforce development training, paying them $250 a month for up to a year, in exchange for their agreement to give up squeegeeing.

Leach said she hopes to enroll up to 100 workers in the training program and is seeking a grant to cover more. (By some estimates, there about 200 people in Baltimore who work the intersections with squeegees.)

The total cost of the program will be about $5 million, Leach said, calling it a “very rough estimate” because the plan draws on existing agency programs and nonprofit and philanthropic dollars, as well as new spending.

One part of the plan – a crowdfunding platform to connect Baltimore area donors to squeegee workers in order to finance specific goals – is being managed by the Baltimore Civic Fund, in partnership with the Mayor’s Office on African
American Male Engagement. 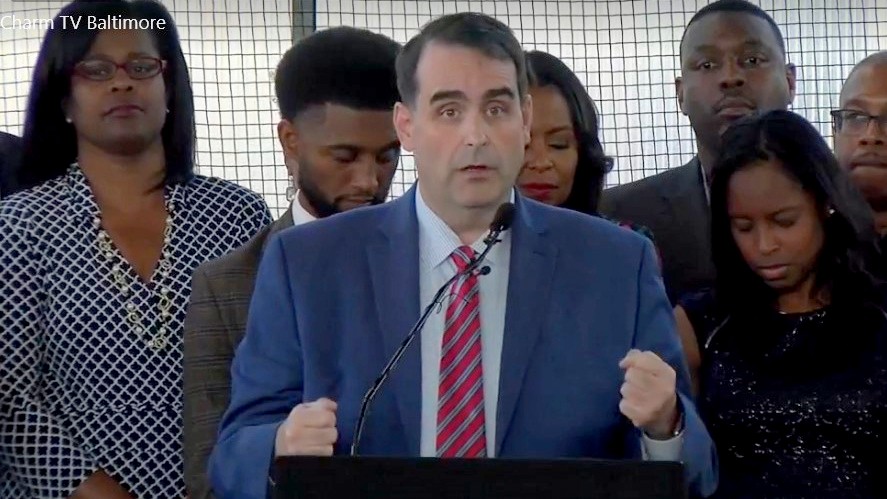 In some quarters, the reaction to Scott’s announcement was swift – and negative.

“You cannot ‘equitably’ remove Black people from public space @MayorBMScott,” the grassroots group Organizing Black tweeted. “‘No Squeegee Zones are racist and $250/month isn’t enough to live. The City can do better.”

But Scott, at the Thursday press event, defended his decision to impose the ban as a way to keep residents safe – not a return to the Martin O’Malley era of “clearing corners.”

“You’ll never hear me say. . . that anybody can be assaulted or robbed,” he asserted. “I don’t care what you look like, what color you are.”

“‘No Squeegee Zones are racist and $250/month isn’t enough to live”  – @OrganizingBlack.

News reports in recent months highlighted complaints from motorists who said they had been intimidated and threatened at intersections.

The prohibited zones include the spot where a youth was arrested for fatally shooting the bat-wielding motorist last July, and another where the judge overseeing Baltimore’s policing consent decree complained to police after a squeegee encounter last month.

Officials say signage will be posted delineating squeegee-prohibited zones in the following locations:

• the length of President Street.

• southern half of Martin Luther King Jr. Boulevard from Interstate 395 to Franklin Street.

• the intersection of Sinclair Lane and Moravia Road.

• the intersection of Northern Parkway and Wabash Avenue.

• the area around North and Mount Royal avenues near the Interstate 83 ramps.

• the area from the I-395 off-ramp down Conway Street to Light Street. 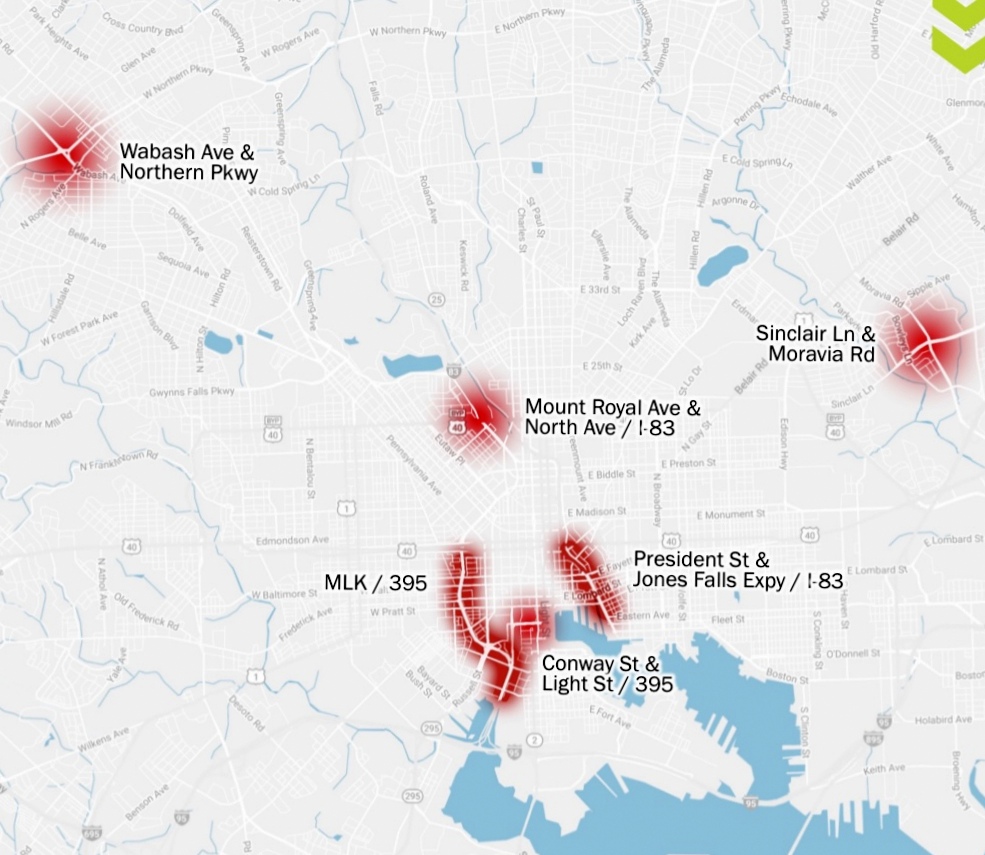 Squeegee customers were among those questioning the ban – specifically the city’s right to prohibit them from paying an individual to wash their windshield.

Asked to explain the city’s legal authority to impose a ban, deputy solicitor Ebony Thompson said it could be defensible if the regulation was worded properly and enforced equitably.

“While panhandling, squeegeeing and solicitation are protected practices under the First Amendment, the city is able to disallow the practice in specific locations as long as the strategy is narrowly tailored to public safety,” Thompson said. 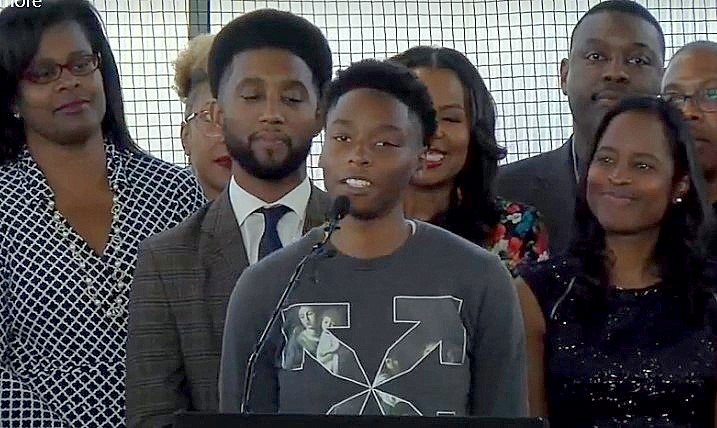 Victoria Thompson, who squeegeed after dropping out of school, asks for understanding. (Facebook)

Another Collaborative participant, Joe Jones, CEO of the nonprofit Center for Urban Families, stressed that the resourceful young people “who created an underground economy to get by,” told decision makers “we don’t want to sell drugs. What we want to do is earn.”

East Baltimore-born Victoria Thompson, 18, talked about why she went to the intersections.

“I didn’t have the mindset to stay on the straight-and-narrow path, which caused me to drop out of school and start squeegeeing,” she said. “We squeegee because we don’t have the money for the basic things like clothing and food.”

“We squeegee because we don’t have the money for the basic things like clothing and food” — Victoria Thompson.

Now she is working toward finishing high school and starting her own business.

“I’m here to tell you that we are not animals. We are human,” she said. “We need your help. We want a better life. We just want the guidance and need the guidance to do something positive.”

Scott, who has been under pressure on the squeegee issue and others, showed his frustration at times, including when a Fox 45 reporter pointed out that newly-elected State’s Attorney Ivan Bates was not present. Scott said Bates was briefed and is in agreement with the plan.

“He asked me questions around what you guys called “guaranteed income” that we call “earn and learn” – again I’ll say it three times so y’all remember,” Scott chided. “There is no space between our new state’s attorney and me on this issue. Don’t try to create it, don’t try to spread this kind of hate and divisiveness between two Black men.”

Asked what would happen if some young people enrolled in the program go back to the streets, Leach acknowledged it could happen.

That’s what happened with her predecessors’ program in the 1980s, according to the news coverage the first day it went into effect.

“This morning, despite the signs and the official buttons, it was business as usual for the squeegee kids,” the correspondent said. “They were still in the street, reluctant drivers still being solicited, traffic still being blocked and the kids still dodging cars.”

“I’m going to be honest with you – there are going to be some failures,” Leach said during the Thursday news conference.

“We’re not always going to get it right, but we’re also not going to give up,” she said, vowing to “stay the course for our young people.” 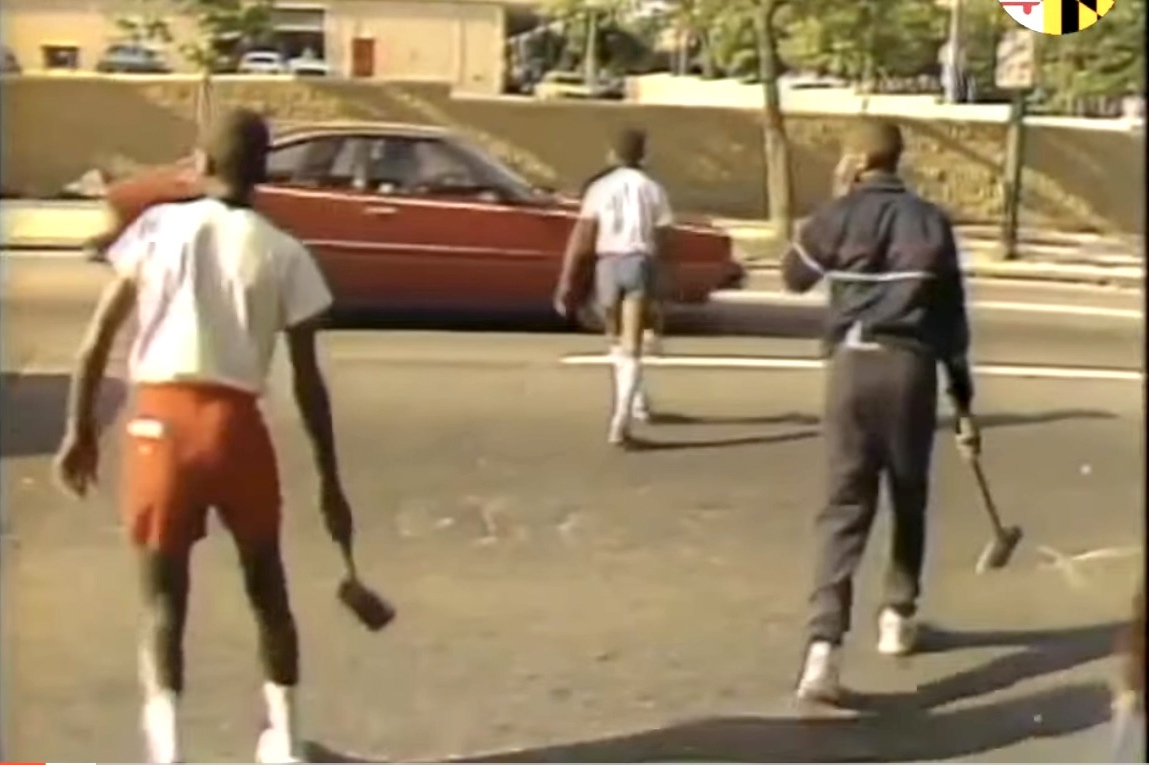 Young people squeegeeing in 1985 in a televised news report about the first day of a City Hall plan to restrict them. (YouTube)