This isn’t the first time the city’s development arm has been criticized for its closed meetings and lack of timely disclosure – Occupy Baltimore staged a demonstration in front of its downtown offices over these very issues last November.

But today’s meeting between Irene Van Sant, BDC senior project manager, and the Council’s taxation, finance and economic development committee marked a heightened insistence by some Council members that the agency change its ways.

“We want more disclosure sooner,” Carl Stokes, chairman of the committee, told Van Sant. “And more than sooner, to have full disclosure.”

Stokes said that the present system in which the BDC privately makes recommendations to the mayor about tax incentives to developers, then presents the incentives as a fait accompli requiring urgent Council approval has to stop.

“We cannot do our due diligence when you do this,” Stokes said.

Councilman James B. Kraft was more explicit. “The minute the developer asks for money from the city or some concession from the city, they open themselves up for disclosure,” he said. 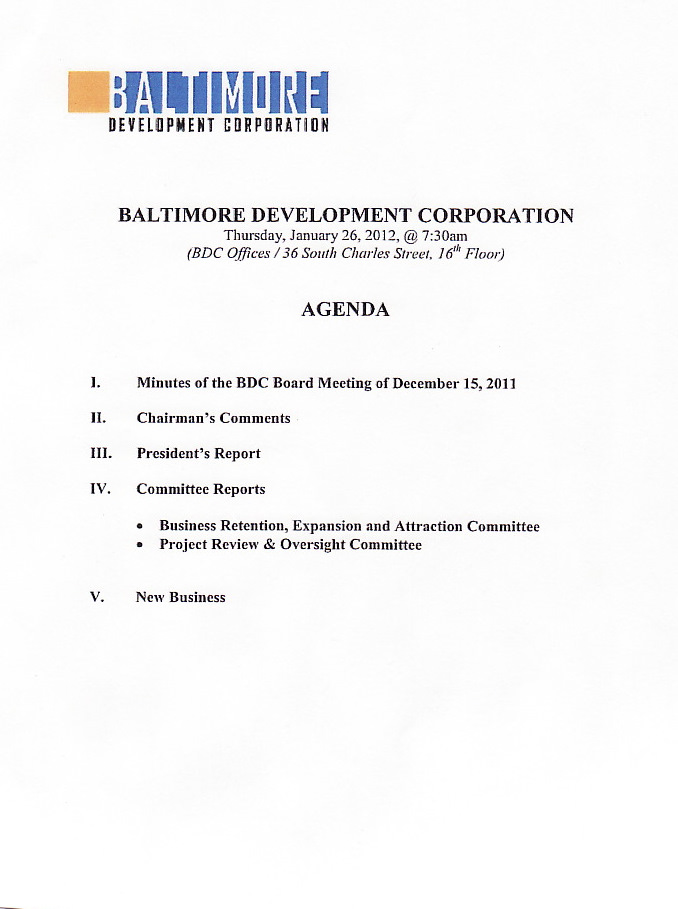 The BDC provides sparse information about its monthly public meeting. At this meeting, a $41-million PILOT tax break was discussed – after the meeting was closed to the public and media. (Photo by Mark Reutter)

Councilman Bill Henry endorsed the need for more information from the agency, while Councilman William H. Cole IV cautioned that it was important for developers to be able to engage in discussions with city officials that are “not discoverable.”

These “tools” are used only when the BDC determines that the breaks are needed to make a development project happen – known as the “but for” rule.

Kraft said there was a “perception of favoritism” in the awarding of PILOTs and TIFs that could be cleared up if the “BDC [wasn’t] so reluctant to disclose anything.”

Van Sant did not commit the agency to any of the suggestions today, saying several times, “We will consider that.”

“We try very hard to be transparent,” she said in defense, but “there’s a line between confidentiality and the public’s right to know.”

The BDC never automatically agrees to a tax incentive proposed by a developer, she told the committee. Instead, the staff does a thorough analysis of the project that may take weeks or sometimes months.

The analysis is then reviewed by the project review committee, which makes recommendations to the BDC’s board, and the board recommends a course of action to the mayor.

Exempts Itself from Open Meetings Act

Van Sant said the BDC holds public meetings, which brought a swift response from Stokes that the agency “goes into private sessions” whenever it discusses its recommendations to the mayor.

The BDC closes its public meetings by invoking an exemption to Maryland’s Open Meetings Act when discussing material that involves financial matters whose disclosure may hurt the parties involved.

Typically the BDC board has a public meeting, then votes to go into closed session and asks the  media and public to leave the meeting room.

Van Sant told Stokes that “we would have wasted your time” by, for example, publicly disclosing a proposed $41-million PILOT tax break for an Exelon building downtown when the deal was rendered moot a few days later by Exelon’s decision to locate at Harbor Point.

Linda Loubert, an economics professor at Morgan State University, said, “For a city like Baltimore needing to have growth, if this good boys club was more open and more transparent, more good things could happen in the city.”

Wendy Blair, head of W.L. Blair Development, argued that the city should establish an independent advisory board to monitor taxpayer-subsidized developments and provide cost/benefits analyses. “We need to evaluate how successful we’ve been,” she said.

Stokes said the committee would hold another working session to develop a consensus of how to improve the overall performance of the tax program and prepare legislation for the City Council.

Neither BDC President M.J. “Jay” Brodie nor members of the mayor’s development staff were present at today’s meeting.