Even though it hasn’t reached an agreement to buy the National Aquarium’s fenced-off and never-opened park on the Middle Branch of the Patapsco River, Sagamore Development already has detailed plans for it.

Sagamore, the real estate arm of Under Armour CEO Kevin Plank, has commissioned architectural designs that show how West Covington Park could become a new home for the Baltimore Rowing Club.

The long-delayed waterfront park was created with millions of dollars in public funds and was designed to serve as an educational and recreational facility for city residents.

Judd Anderson, a member of the rowing club’s coaching staff, shared drawings this week that were commissioned by Sagamore and dated July 7, 2015.

They show an array of buildings lined up along the water’s edge, including a two-story boat house with a ballroom overlooking the water, a restaurant, boat launching docks and parking for about 400 cars, that could be built on the site of West Covington Park.

The drawings provide the first tangible evidence that Sagamore has been considering new uses for the West Covington parcel, part of a 19-acre tract that the city originally sold to a National Aquarium affiliate at a below-market price to create an aquatic life center campus that never materialized.

Council in the Dark

City Councilman Carl Stokes, chairman of the Recreation and Parks Committee, has called for a public hearing to find out why the park is still not opened after receiving so much public funding and what is being planned for it. 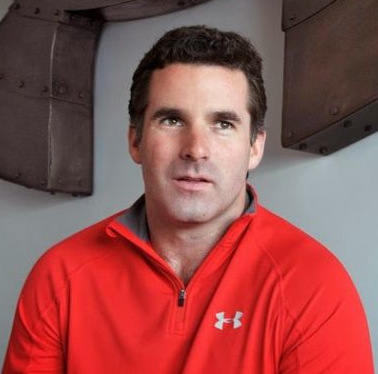 Aquarium CEO John Racanelli last week acknowledged to The Brew that Sagamore has had “conversations” with the aquarium about purchasing land, but he said no sales are in the works at present.

John Maroon, a spokesman for Sagamore, said in an email yesterday that he wanted to clarify that the rowing club drawings weren’t prepared specifically for the aquarium’s park property at Hanover and Cromwell streets.

But he didn’t deny that the drawings correspond precisely to the linear dimensions of the aquarium’s park. He said they were developed “to fit any future rowing club site on the Middle Branch.”

Maroon explained that Sagamore had architects draw up the plans because it wanted to help the rowing club and its youth programs.

“It came to our attention that you have come across a set of plans that Sagamore Development put together to assist the Rowing Club and their terrific youth programs with their upcoming capital campaign,” he wrote.

The Brew’s coverage of Kevin Plank and the aquarium’s West Covington Park:

The drawings hint at the diverse range of uses that Sagamore is exploring to activate the shoreline along the Middle Branch.

The company has assembled 240 acres in Port Covington, Westport and other areas along the Middle Branch to build a new waterfront headquarters for Under Armour, which has outgrown its current base in Locust Point.

Sagamore is not just planning offices and manufacturing space for Under Armour employees. It already has begun building a distillery for Sagamore Spirit, a rye whiskey company that Plank started, and a “maker space” that will house tenants ranging from 3D printers to glass blowers as well as Under Armour’s innovation team that designs shoes. 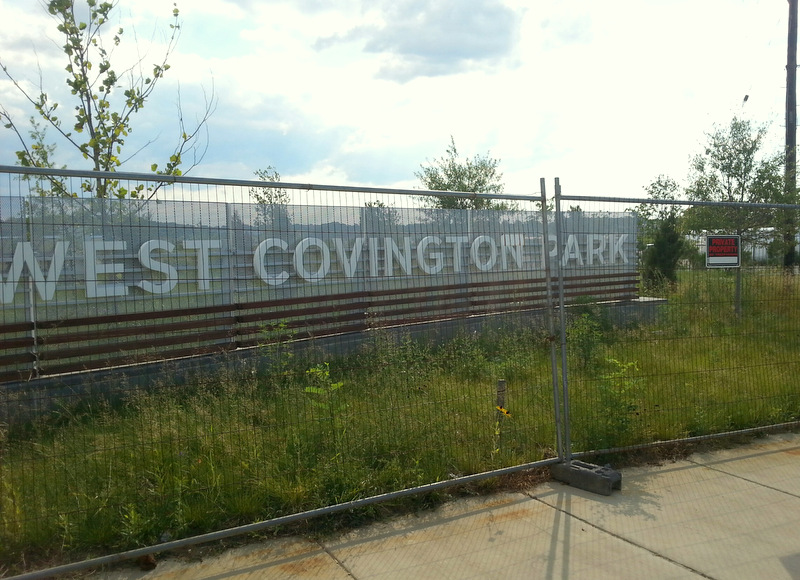 West Covington Park is completed except for a few final touches, but is fenced off from the public. The Nationla Aquarium says the city Department of Transportation is responsible for opening the park. (Photo by Ed Gunts)

Anderson is the executive director of Reach High Baltimore: Rowers Empowering Baltimore Youth. He said he has worked closely with Sagamore representatives on plans for the rowing club and has gotten the impression that the company doesn’t want to waste any time in transforming the area.

“They are moving very fast,” he said at a meeting of city officials and waterfront planners earlier this week. Among other ideas Sagamore has for the area, he said, are:

• Trash collector on the Middle Branch. A solar-powered water wheel, like the one in the Inner Harbor, would clean up water running into the waterway from the Gwynns Falls.

• Athletic fields in Westport. Sagamore is thinking of creating playing fields on part of its 43-acre Westport property as a temporary use until tenants are identified for new buildings and construction is ready to begin. The land was planned by developer Pat Turner to be a $1 billion mixed-use community. Sagamore bought the property for $6 million at a foreclosure sale.

• Tearing down ex-railroad bridge. City planners have suggested that the former Western Maryland Railway bridge, connecting Westport and Port Covington, be converted to a pedestrian walkway. Anderson said Sagamore has concluded that the bridge is too deteriorated to repair and wants to build a new pedestrian bridge that would help create a walking and jogging loop around the Middle Branch. Anderson said Sagamore has completed its acquisition of the bridge from CSX Transportation and it cost $3 million.

• Lighting up the Hanover Street Bridge. Anderson said Sagamore has hired an architectural lighting specialist from San Francisco to light up the bridge at night similar to how the top of the Empire State Building is lit up in New York City.

Adding to the Cachet

A new and expanded rowing club is a use that Sagamore apparently would like to have close to its other holdings. Sagamore is not necessarily seeking to own the buildings or make a profit from them, insiders told The Brew, but it likes the way it could add cachet and help set the tone for the properties it does control nearby.

In planning the new Under Armour headquarters at Port Covington and deciding what else to build, Plank wants “all the nice stuff” on “his side” – the north side – of the Middle Branch, said one observer.

Other cities built distinctive boat houses that have become symbols of their efforts to bring life and activity to the waterfront.

Philadelphia is known for its boat houses along the Schuylkill River. In Chicago, Mayor Rahm Emanuel hired hometown architect Jeanne Gang to create “designer boat houses” for his city.

One of the attractive qualities of a rowing club, from a planning standpoint, is that it is a water-oriented use that would draw people and bring attention to the area and also be permitted on city park land, as the present Rowing Club is.

30 Years Ago: The Same Goal

Changing the tone of the area was also the goal behind building the current Baltimore Rowing Club at 3301 Waterview Avenue in Cherry Hill.

Ayers Saint Gross of Baltimore designed a distinctive, award-winning building that was constructed by the city’s parks department as a way to bring activity to Cherry Hill and hopefully trigger additional construction.

The building itself was meant to be expanded. But 30 years later, it remains isolated on Waterview Avenue. 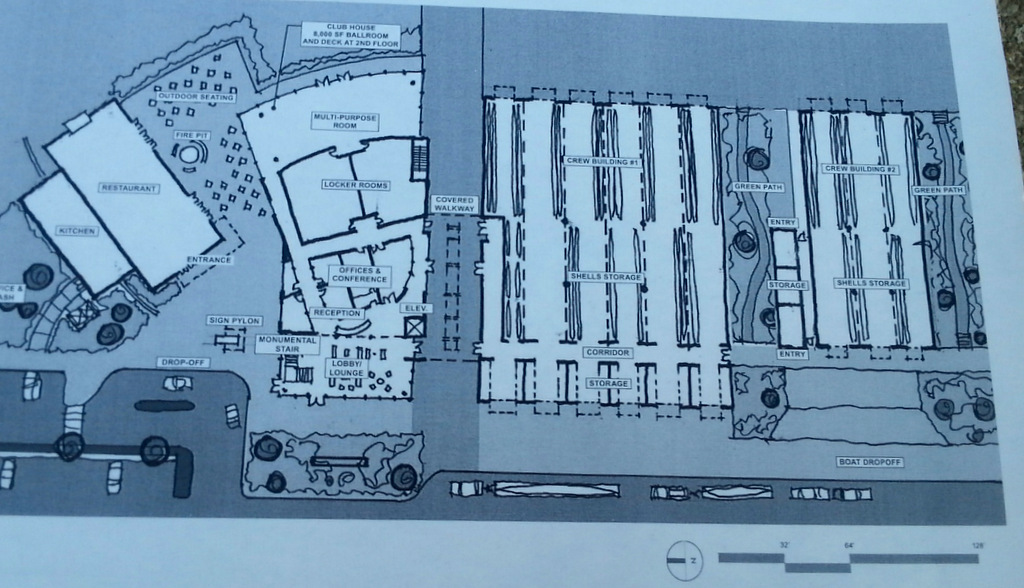 A partial site plan of the complex of facilities envisioned by Under Armour’s architects for potential sites on the Middle Branch. Some Sagamore representatives are said to favor the West Covington Park site. (Sagamore Development)

Anderson said the Sagamore-commissioned drawings were designed to show how a new rowing club might fit on any one of three locations on the Middle Branch. Calling them “hypothetical,” he said they were not prepared for or tailored to one specific location.

One location, he said, is a waterfront site in Westport, near where playing fields are planned. The second is a site facing a cove between the aquarium’s park and Swann Park. The third location is West Covington Park.

Anderson said some rowing club representatives like the cove site because water in the cove is less than six feet deep.

He said some Sagamore representatives have indicated they like the aquarium park site the most, which features picturesque views of the Hanover Street Bridge.

Maroon did not confirm that the aquarium land is Sagamore’s preferred site for moving the rowing club.

The rowing club needs a new home, Anderson said, because its existing facility is not well maintained by its landlord, the city.

He said the replacement buildings as designed would cost $15 million or more and represent a “pipe dream” for the rowing club unless a donor or the city pays for them.

Anderson said he has been impressed by how quickly Sagamore and architect Brown Craig Turner came up with a design and is grateful for their help in creating images that he can show to potential donors.

If Plank’s charitable arm wants to fund a new rowing club for Baltimore, he said, he would like to explore that, too.

“[As] I say to everyone I come in contact with, Sagamore is the best thing that has happened to the Middle Branch area in 40 years, and we are excited about their potential positive impact on all of Baltimore,” Anderson said.

No Response from Mayor’s Office

Howard Libit, a spokesman for Mayor Stephanie Rawlings-Blake, did not respond to questions about the idea of moving the rowing club away from Cherry Hill or to what degree the mayor has been part of discussions over the future of the park site.

Rawlings-Blake is a member of the aquarium’s board of directors. She is also in charge of the city Department of Transportation that is responsible for completing and opening West Covington Park, according to aquarium CEO John Racanelli.