While Under Armour CEO Kevin Plank was buying up land in Port Covington over the past two years, questions surfaced about whether the mini-city planned to rise there would reduce public access to Baltimore’s waterfront.

Would that shoreline property be “privatized” and put behind a wall solely for Plank’s employees and guests, like a gated community in the suburbs? Or would it be open and accessible to the general public, like the seven-mile promenade along the Inner Harbor?

Plank’s real estate team went to great lengths to allay those concerns Thursday when it unveiled a proposed master plan to guide the revitalization of 266 acres along the Middle Branch of the Patapsco River over the next 20 years.

During a two hour public presentation to Baltimore’s Urban Design and Architecture Review Panel, representatives for Sagamore Development Company, Plank’s real estate arm, said repeatedly that their goal is to provide continuous public access all along the water’s edge in Port Covington as part of a multi billion dollar redevelopment of the property that Sagamore has assembled.

Colorful renderings of people sitting, strolling, jogging and biking along the water’s edge, supplemented their remarks. 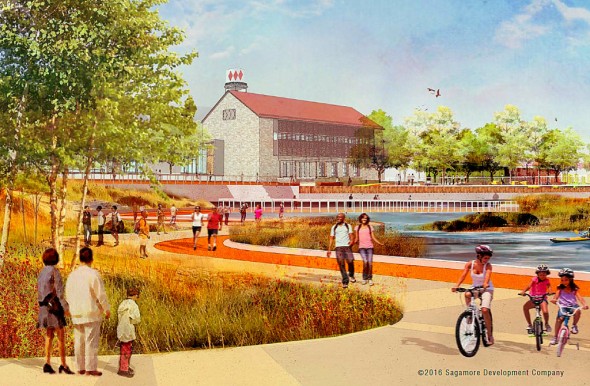 In their presentation, they showed pictures of other cities that boast public access to the waterfront. They introduced at least five consultants who specialize in working with various aspects of the public realm, including Biohabitats of Baltimore.

There were caveats, to be sure, starting with the fact that Sagamore doesn’t own all the land for which it is making recommendations. And plans were not presented for the single most important piece of Plank’s waterfront, a 50-acre waterfront tract where he wants to build a new world headquarters for Under Armour.

But the overwhelming thrust of the plan, the developers said, was to make the shoreline part of the public realm, even more so than it is at present.

Because plans were not presented for the Under Armour headquarters portion of the project, targeted for a large peninsula that juts into the Middle Branch, there was little discussion about how the public would have access to that key site. Sagamore’s design group, led by Elkus Manfredi Architects of Boston, said that would come later.

But designers did lay out their vision for land to the north, east and west of the headquarters site, including property along the water.

In all, the plan will guide development of up to 13 million square feet of space. It calls for construction of what will essentially be a new mini city in south Baltimore, with housing, offices, hotel rooms, maker spaces, stores, restaurants and public spaces, including parks, squares, promenades and streets.

For planning purposes, the land has been divided into several sub-districts, each with a different character.

In addition to the Under Armour campus, which will contain up to three million square feet of space, there will be an eastside district and an “entertainment square” – a mixed use area with commercial and entertainment activity at ground level, playing off the Sagamore Spirit whiskey distillery already under construction. Other uses include “residential, retail and hospitality.”

There will also be a westside district, a potential location for big box retailers and other commercial activity, office space, “commodity,” maker space and residences. A central, inland area east of Hanover Street and close to I-95, may have some of the tallest buildings in the development, visible from the interstate. Proposed uses include “office, residential, retail and parking.” 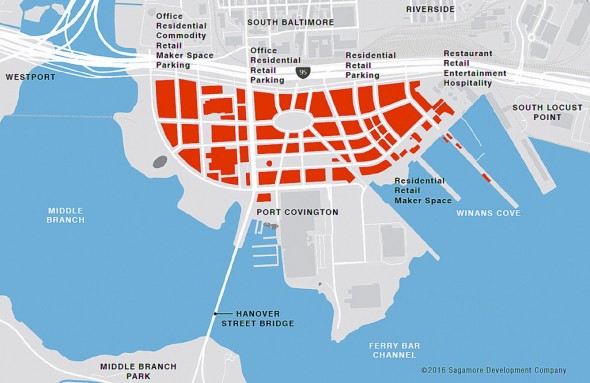 Plan for the Port Covington area surrounding Under Armour headquarters, to be located on the peninsula east of the Hanover Street Bridge. (Graphic: Sagamore Development Company.)

Helping define the different sub districts in the plan will be a series of public spaces. They include: an Archaeological Pier and Eco Peninsula, (2 acres or more); an oval space called Founders’ Park (3 acres); The Green (5 acres); and a Sports Park under I-95 (7 acres).

Founders’ Park is a programmed space modeled after Bryant Park in New York. The Green could be anchored by horse stables for the city’s mounted police. Sports Park would be the site for “alternative uses,” such as skateboarding, basketball, BMX bike riding, and pop-up events.

Mix of public and private ownership

One design and access issue is that some waterfront properties, most notably the Locke Insulators tract, are not owned by Sagamore and are currently off limits to the public. The same is true for some of the land near Nick’s Fish House and Grill, just east of the Hanover Street Bridge.

West Covington Park, owned by the National Aquarium, was shown as part of the West Waterfront. So was Swann Park, one of two city owned parks that Sagamore has talked with the city about controlling in some fashion. 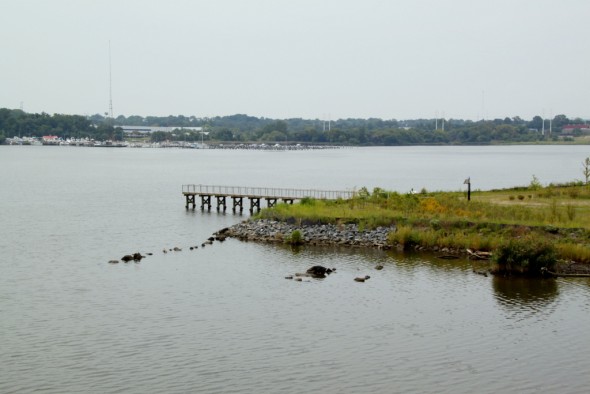 Paff said some of the land that makes up the public realm may be publicly owned and some may be privately owned, but the intention of the master plan is to make it all seem like one seamless stretch of property, open and accessible to all.

She said signs, lighting and other design features could be coordinated on both public and private land to make it seem like one unified environment.

“The underlying ownership may remain private,” she said. “We will enter into agreements with the city for maintenance and management of it because we understand the city right now is not able to receive 40 acres of a tightly managed park system…We’re starting with a stake in the ground on this commitment to these publicly accessible open spaces throughout our project.” 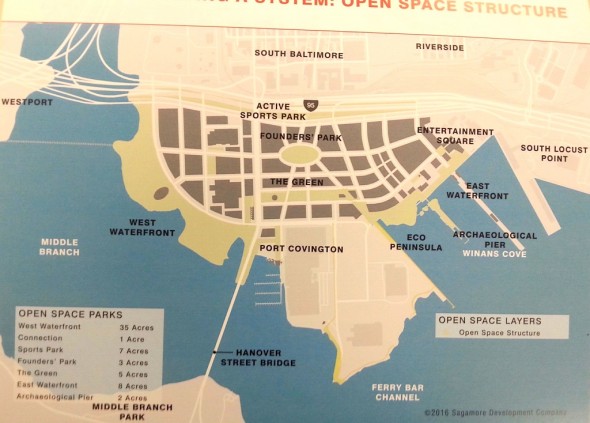 Paff said the design team has given much thought to shaping the public realm and making people feel welcome.

“We had a lot of strong voices at the table early in 2015 talking about how you ensure that it feels public – isn’t just public as a matter of a written agreement, but actually feels public,” she said. “And part of that is ensuring that the buildings are not between the right of way and the water’s edge, right? And when they do occur, that there is actually enough depth and enough porosity between the buildings that the public still feels as if. . .’I belong in this space.’

“I think there is a philosophy, an overarching philosophy, that we have to put a stake in the ground and we’ve got to adhere to it,” she said. “I think that we can do it as design and education of the user, with keeping park signage consistent so that folks understand that this is public realm, that they do belong here. But I do think the maintenance of it is probably something that we will want to work with the city [on]., with the Waterfront Partnership we’ve had discussions….The development of a park system is going to take a while.”

The designers sketched out a host of potentially transformative ideas for the target area. They discussed lowering elevated portions of Hanover Street in order to get more of it “down to grade” and eliminate barriers from one side of the property to another. They also talked about lighting the Hanover Street bridge in a dramatic way and creating a “habitat protection area.” 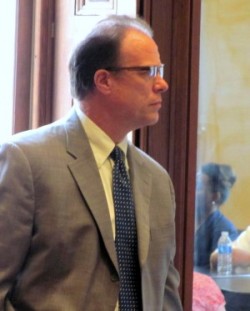 Encouraging the use of mass transit, including more local bus service, a free “circulator” bus, four bike-share stations and two new light rail stations, is another design goal. Transportation planner R. J. Eldridge promised that the community would be a virtual laboratory for different modes of transportation.

Members of the design review panel praised the Sagamore team effusively for its sophisticated and enlightened planning approach, especially regarding the public realm.

“With respect to waterfront access, I want to compliment you. . .for providing the amount of public open space,” said panel member Rich Burns. “My rough calculations suggest that the open space represents about 40 percent of the development. I think that’s unheard of. I’m not sure that even, for example, Inner Harbor East can claim that… I think it is quite remarkable.”

“I would like to also extend a sense of deep appreciation and true excitement on the part of the city for what we see presented here,” said city planning director Tom Stosur. “I can’t imagine a more auspicious start.” 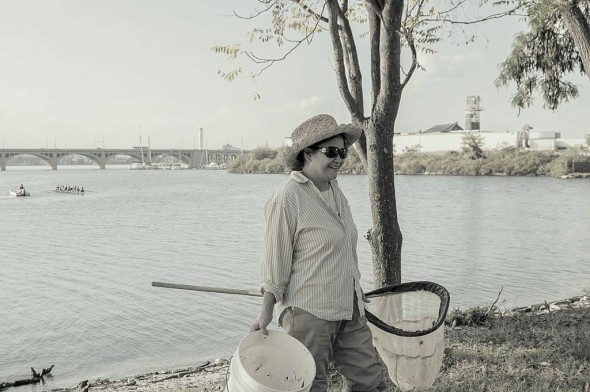 Ferry Bar Park, one of two city-owned parks Sagamore has talked with the city about controlling in some fashion. (Photo by Jeffrey Nelson)

The photo above was taken by a Johns Hopkins University student, Jeffrey Nelson, as part of a class project for instructor Jennifer Bishop. The Brew will be featuring other photos from this class project in the coming weeks.

Here’s what Nelson had to say about the photo:

“This was the wife of a fisherman that was at a park. . .They had been coming to the park to fish for decades, long enough for her husband to tell a story about the concrete tables along the river slowly eroding and sinking into the water.”