Streets named after colors, as in Black Street and Blue Street.

Trees planted so there is a variety of specimens on every block.

An iconic public building comparable to the grandeur of the Sydney Opera House.

Those are a few of the ideas that designers are exploring for Port Covington, where Kevin Plank’s Sagamore Development Company is planning a city within a city to go along with a new global headquarters for Under Armour.

How About a Tunnel?

During the presentation, city planning director Thomas J. Stosur threw out a suggestion of his own: Dig a tunnel to carry traffic under the Middle Branch of the Patapsco River to connect Port Covington with Cherry Hill, instead of the Hanover Street Bridge.

Stosur suggested that a tunnel could be a good way to take heavy trucks off portions of Hanover Street and otherwise mitigate the impact of through traffic in South Baltimore.

“It’s my idea,” he said after the meeting, explaining that it’s not part of any department plan or study.

Indeed, a Los Angeles-based consultant has just been hired by the city Department of Transportation to do a multi-million-dollar study to determine whether to repair or replace the aging bridge.

A tunnel is not one of the alternatives the consultant has been asked to study, with a report due in two years’ time.

Sagamore works on a much faster timetable.

It has been meeting frequently with UDARP to show ideas for various sections of a 266-acre redevelopment district, including a 50-acre parcel set aside for a new headquarters for Under Armour. 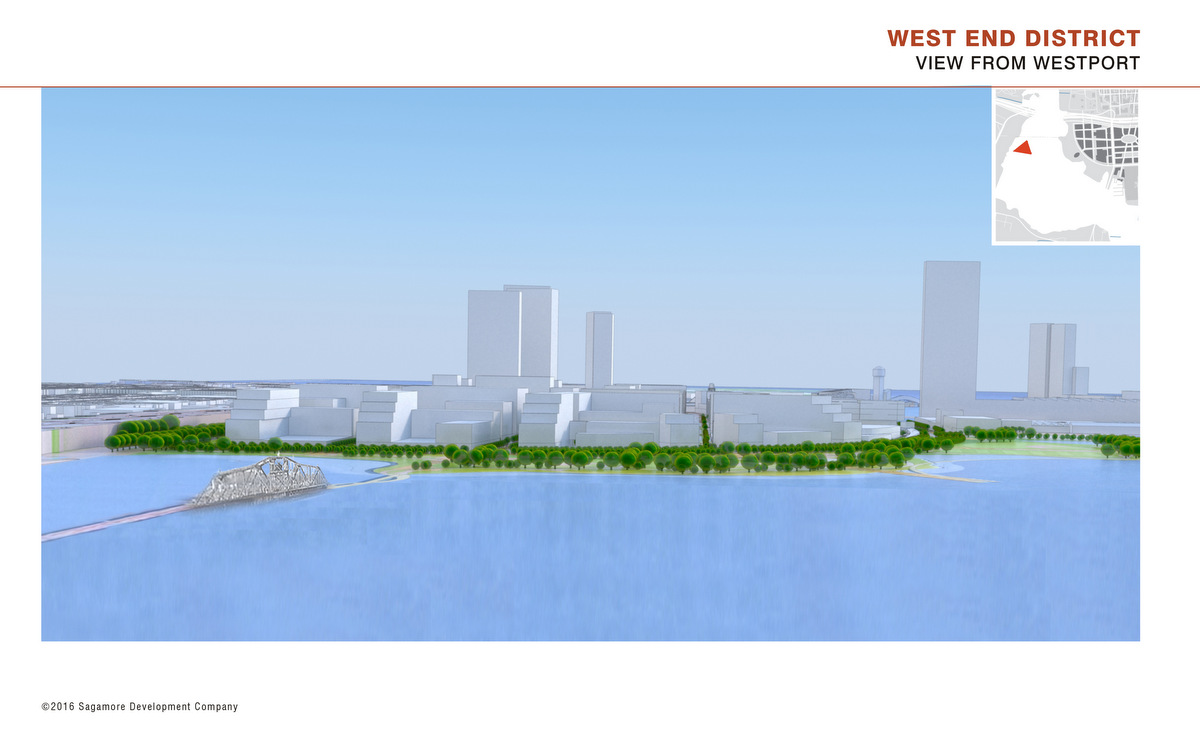 A rendering of new buildings nestled near the current Swann Park, as seen from Westport where Plank owns additional land. (Sagamore Development)

With each UDARP meeting, the designers are showing plans in greater detail. Sometimes, the discussions turn into brainstorming sessions in which they propose a wonderland of ideas.

Yesterday, when they discussed the West End of Port Covington and the Hanover Street corridor, the developers got down to specifics such as the names of streets and the specimens of trees they might plant.

Instead of planning one block with all oak trees or maples or elms, the landscape architects proposed planting a row of oak-maple-elm, oak-maple-elm, or some other combination.

They said mixing up the specimens within a block would represent diversity They also said it would be good in case there is a disease that kills any one type of tree. (A blight actually killed all the cherry trees in Cherry Hill in the 1950s.) 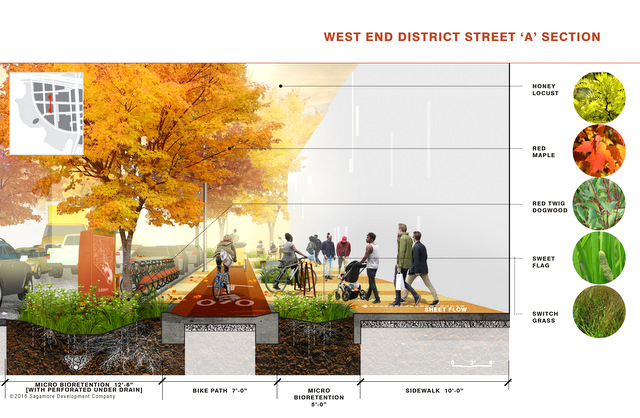 Plans for diverse tree and ground cover, plus a bike path and row of computerized bike-share racks. (Sagamore Development)

In some cases the planners made suggestions for land Sagamore doesn’t own.

They said Sagamore wants to expand the City Garage innovation hub on Dickman Street, which it owns, with an addition to the south, which is land owned by the National Aquarium.

They said they’d like to program waterfront parkland with activities such as flea markets, festivals and concerts.

They proposed to “lower” Hanover Street to make it easier to cross and to build stronger connections between the east side of Port Covington and the west side. They did not discuss how much it would cost to lower Hanover Street or who would pay for it.

“Aren’t We Tearing Those Down?”

The review panel members had a few questions about the designs they saw yesterday.

Focusing on a drawing for a pedestrian bridge that would cross Hanover Street, they asked about the city’s policy on skywalks these days.

“Aren’t we tearing down most of the skywalks around the Inner Harbor?” one panel member asked. 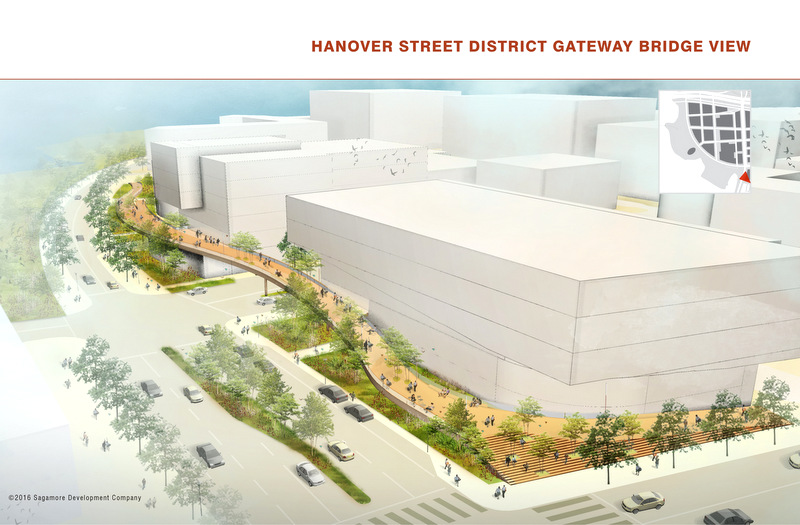 Panel member David Haresign said a few items were missing from the master plan that are found in most cities.

“There’s not a church, not a performing arts center, not an art gallery. . . libraries, schools, nothing,” he said.

Caroline Paff, a Sagamore vice president, said planners have identified a spot along the West Covington shoreline that would be ideal for a major public building of some sort – a concert hall, perhaps.

Paff said this spot is shown in Sagamore’s plans as an egg-shaped building, and the plan is actually the footprint of Australia’s Sydney Opera House.

“We know we have an important place that is very visible from everywhere around it, so we think that is a good place for a very important building that the public feels ownership of,” she said.

Under former Mayor William Donald Schaefer and ex-planning director Larry Reich, the city used to launch all kinds of studies and planning efforts, even for seemingly outlandish ideas such as downtown aquariums and an urban ballpark that incorporated a long brick warehouse.

Sometimes they led to real projects.