Local television viewers may have wondered what was behind the highly-polished promotional ad for Port Covington, broadcast during a break in presidential primary coverage last night.

“We will build it together,” says the ad’s narrator, who sounds vaguely like Morgan Freeman.

To a stirring soundtrack, people are shown in diverse Baltimore settings speaking enthusiastically about the Under Armour headquarters and huge redevelopment project the sportswear maker is planning on waterfront land on the city’s southern border.

Today the “ask” behind the media campaign became clear, as news broke that Sagamore Development Company, Under Armour CEO Kevin Plank’s development arm, is asking taxpayers for a subsidy of astonishing size – $535 million.

This Tax Increment Financing package (TIF) sought by Sagamore – the largest such package ever sought for a development in Baltimore – was surprising even to those who knew it was coming.

“Obviously, it’s huge. It may be the largest TIF in United States history,” said City Councilman Carl Stokes, a candidate for mayor. “It certainly is among the top ones.” 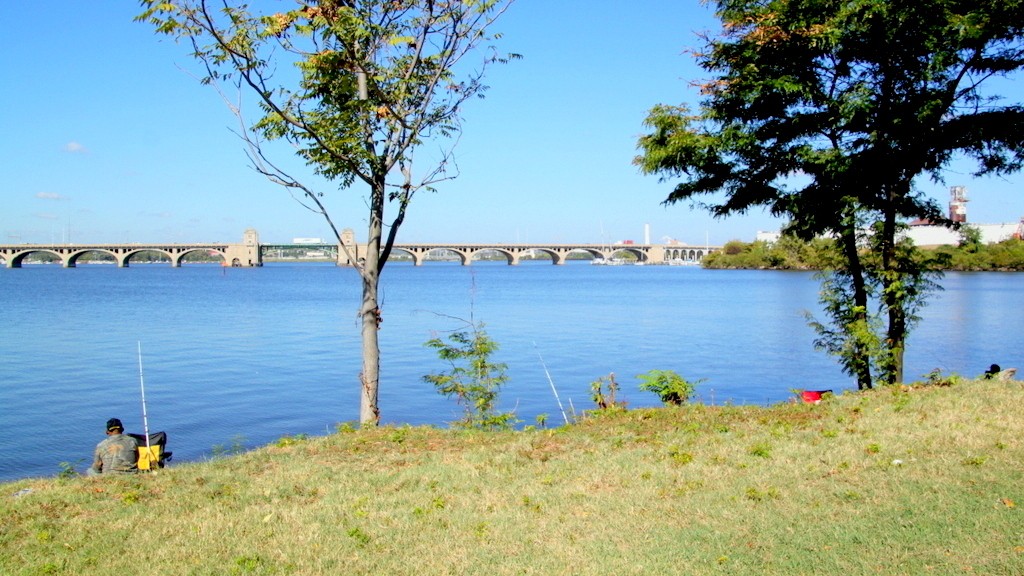 A record-setting subsidy package is sought to transform a low-key South Baltimore waterfront into a massive mixed-use development and Under Armour headquarters. (Fern Shen)

As with other TIFs – like the $107 million Harbor Point TIF awarded in 2013 – the city would float bonds “to construct public infrastructure for the project,” according to information released by the Baltimore Development Corporation today about the Sagamore request. Future property taxes generated by the project would be used to pay off the debt.

Company officials said they would seek an additional $574 million in state and federal funds for the multi-billion-dollar project.

City and state leaders have been meeting with Sagamore for months and publicly gushing over the design and planning of the mini-city on the Middle Branch of the Patapsco River. A few months ago, Plank was quoted, in so many words, indicating he would be making the ask.

But anticipated though it is, the TIF request comes at a fraught time – and not just because 2016 is a local election year.

The billionaire businessman is seeking the TIF as the city nears the one-year anniversary of rioting that called attention to the concentrated poverty in black neighborhoods and roused resistance to the city’s decades-old practice of awarding developer tax breaks and subsidies.

• A recent request for a $17 million TIF by a developer associated with the University of Maryland BioPark, for instance, sparked a demonstration by activists and public housing residents. Protesters said they believed the “Community Benefits Agreement” the developer signed would do little to lift up the lives of nearby residents and make up for what they view as a multi-million-dollar giveaway.

• One casualty of the tax financing packages, it turns out, is Baltimore public schools. Officials recently acknowledged that state funding formulas interpret revenue for TIF-supported projects like the BioPark as grounds for slashing millions in education aid to the city. 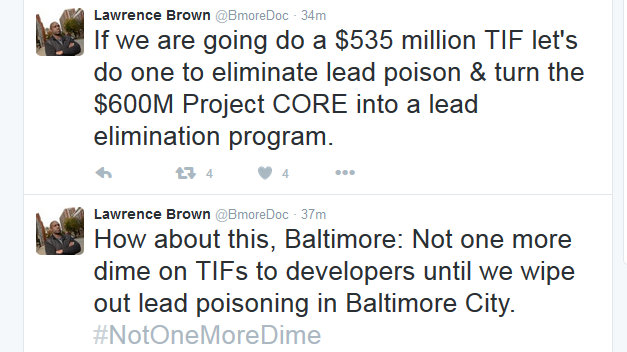 Young said the move would help the city’s economy. Critics said the estimated loss of up to $1.2 million in revenue would be better spent on residents than on gifting Rihanna or Bruce Springsteen with a special deal. The council president, an incumbent candidate in the upcoming Democratic primary, has postponed final consideration of the bill.

Today’s announcement brought condemnation from some of the same critics.

“What could Freddie Gray’s neighborhood (Sandtown-Winchester), Upton/Druid Heights, Greenmount East, or Middle East do with $535M?” said Brown, who has been focusing on equity and development issues.

“Have we fixed our roads? Do our schools have heat & drinking water? If not then why give our tax dollars to wealthy developers?” he tweeted.

City Within the City

Mayor Stephanie Rawlings-Blake said she looks favorably on the project which, as the developer envisions it, is massive in scale.

They also are planning parks, bike paths, and 17 new streets with 66 intersections, the BDC says. 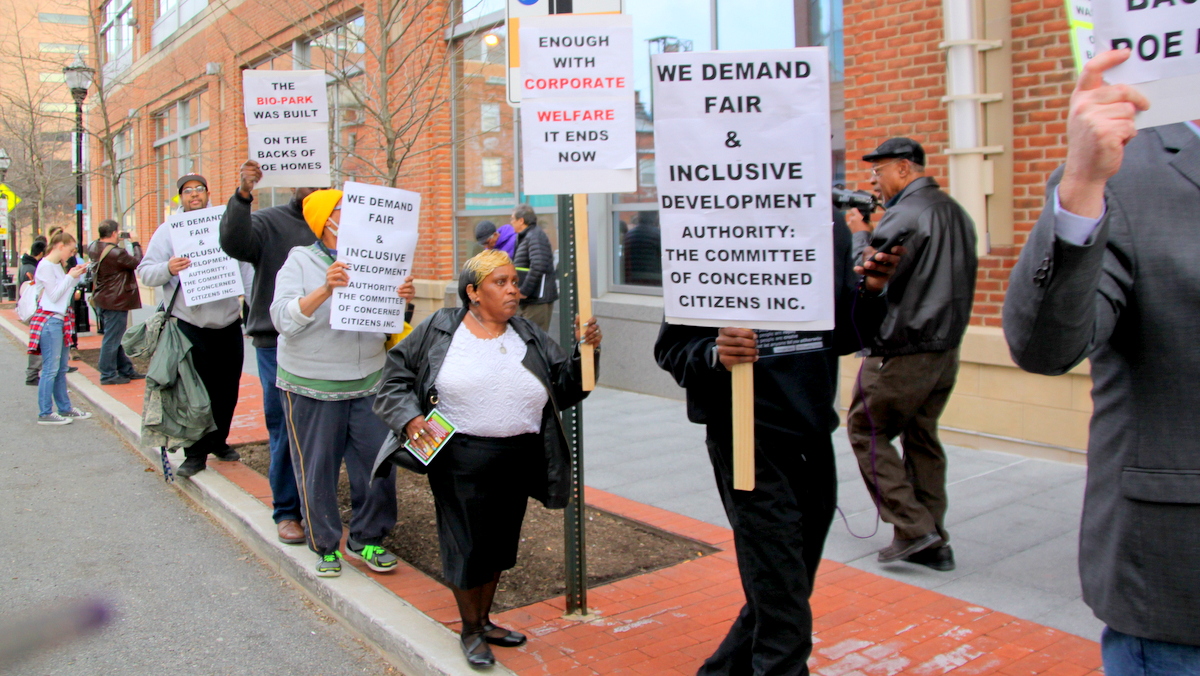 Elsewhere in City Hall reaction was muted, including from Stokes, who has sought to portray himself as tough on developers.

“TIFs are supposed to be for businesses in commercial areas that are blighted with high unemployment and high poverty levels,” he said.

“I’m curious to see, given the criteria we’re supposed to use, how the sponsors will justify this TIF,” Stokes continued. “I’m not pre-judging.”

As chairman of the Taxation, Finance and Economic Development Committee, where the request would need approval, Stokes will be intimately involved as the request moves forward. 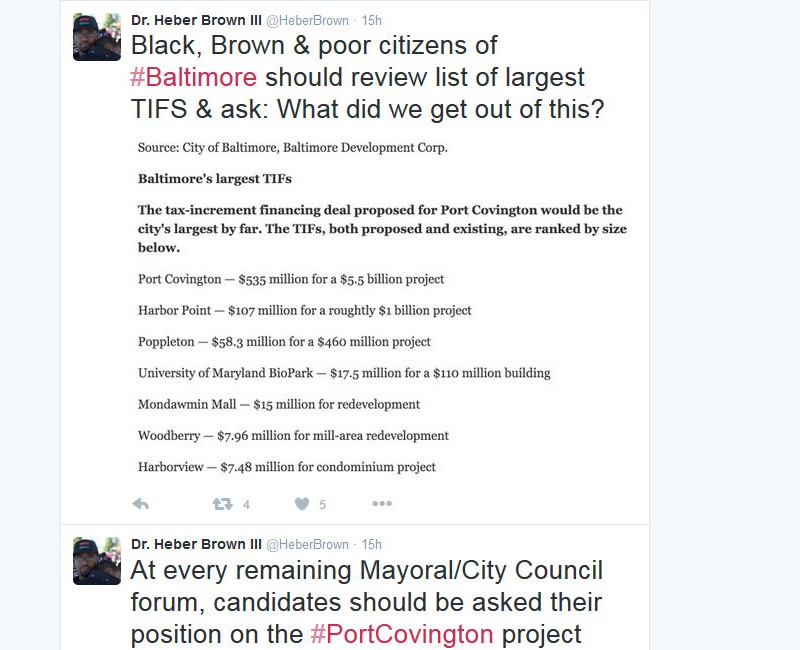 As for Young, his deputy chief of staff, Lester Davis, would only say the Council President is eager to “peek under the hood and get a sense of the particulars. There’s a massive amount of details to go through.”

One thing Stokes was clear on is that he and his fellow Council members, as well as the current mayor, should be the ones to review the proposal, rather than wait for the primary election in April or the general election in November.

“We’re not lame ducks until the November election,” he said. “The Council is the Council and the mayor is the mayor until December 7. I don’t think we should wait [until after the elections]. If it’s ready to consider, I think we should look at it.”

“We Want Everyone to be a Part of This”

In a statement on the request, Sagamore president Marc Weller said the company is “proud that Baltimore is home to one of the largest urban renewal projects in America right now.” 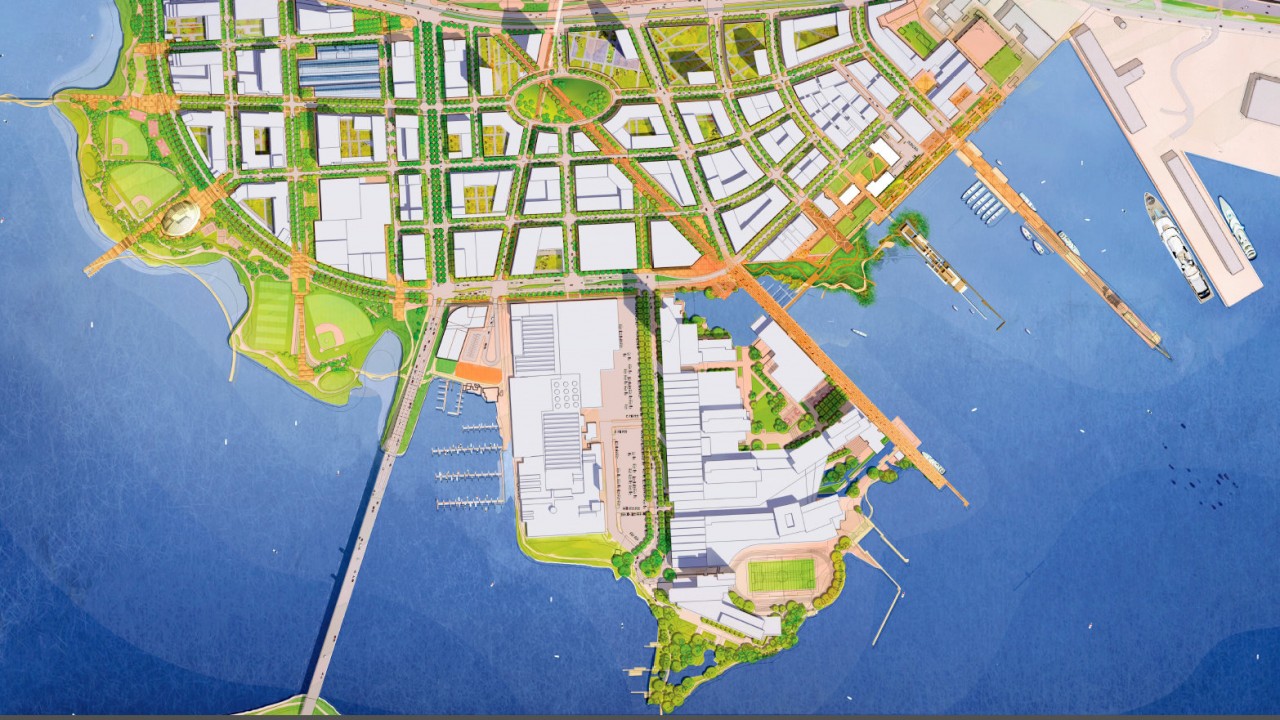 Anticipating the criticism, he also said that the infrastructure improvements would bring “much-needed economic growth today” that would pay off with tax revenue in the future.

Wikipedia defines TIF as “a public financing method that is used as a subsidy for redevelopment, infrastructure and other community-improvement projects” in many U.S. cities and states.