The perennially popular gathering spot for City Hall officials and local developers – and the place where Mayor Stephanie Rawlings-Blake famously officiated at the wedding of two top lobbyists – will see a new kid on the block this year.

Sagamore Development, the private company owned by Under Armour’s CEO Kevin Plank, is sending seven of its officers and associates to Las Vegas for the May 22-25 “RECon” convention sponsored by the International Council of Shopping Centers.

Also booked at the event are eight representatives from Baltimore. Among them: Mayor Rawlings-Blake, City Council President Bernard C. “Jack” Young, and the chairman of the Council’s economic development committee, Carl Stokes.

The convention will be held at the Las Vegas Convention Center, but the real business is conducted at nearby hotels and restaurants where businessmen and women, politicians and development officers mingle under poolside cabanas, at private parties and over intimate dinners.

Literature from the convention touts the four-day bash as the best platform for “networking, dealmaking and educational opportunities” in the real estate business.

Lester Davis, a spokesman for Young, agrees. “You’d almost be derelict in your duty if, as a high-ranking elected official, you didn’t go,” he told The Brew.

“This is essential. This is the largest retail conference on the globe,” Davis continued. “Jack’s focus is going to be on distressed communities. Last year, he focused on neighborhoods that were of critical importance to support the health of future Baltimore.

“That’s his focus this year. His sole purpose in going to Vegas is to get in front of decision-makers, the people who control the purse strings who can say on the spot, ‘We’re coming to West Baltimore.’ ”

Headed in a Different Direction

In the case of Sagamore, West Baltimore is far from its mind.

The company instead is seeking $535 million in TIF (tax increment) bond subsidies from Baltimore to pay for a proposed $5 billion office, retail and housing complex on property owned by Kevin Plank at Port Covington in South Baltimore.

The property will house Under Armour’s new global headquarters – which is not seeking TIF money – and a broadly sketched-out community consisting of 42 new city blocks that will replace the Baltimore Sun’s current printing plant, vacant waterfront land and several local industries.

According to online attendance records, the company will be represented at the RECon convention by President Marc Weller, Senior Vice President Steven A. Siegel, and Phil Akins, chief financial officer of Plank Industries.

Several marketing professionals will also attend and can promote the Covington project to potential retailers. 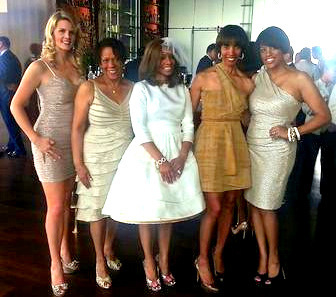 Lobbyist Lisa Harris Jones (center) poses with state Sen. Catherine Pugh (to her left) and Mayor Stephanie Rawling-Blake at her wedding reception that took place during the 2013 RECon convention. Sen. Pugh, who last week declared victory in the Democratic primary for mayor, is not listed at this year’s RECon. (Brew file photo)

Hanging out in Vegas

The City Council is expected to receive enabling legislation from Mayor Rawlings-Blake by May 16 to establish a TIF district at Port Covington and authorize the bond issuance.

Five days later, Young and Stokes are booked at the RECon convention.

Rawlings-Blake will attend the first days of the convention before heading off to Havana, Cuba, for a week-long trip sponsored by the U.S. Conference of Mayors, her spokesman, Anthony McCarthy, confirmed today.

Young won the Democratic primary race last week and is expected to sail to a new four-year term as City Council President in November’s general election. Stokes and Rawlings-Blake are lame ducks, leaving City Hall when their current terms end on December 5.

According to Davis, Young is not scheduled to meet with Sagamore representatives while in Las Vegas. Stokes expressed surprised that Sagamore was sending its officers to the convention.

“If I see them there, I’ll just say ‘hi,’ ” Stokes said, adding that he would have “no informal discussions” with Sagamore after the enabling legislation is introduced to the Council.

Stokes and Young have requested $1,761.12 each to cover the cost of hotel and food during their four-day stay in Las Vegas. Two members of Young’s staff, Carolyn Blakeney and Michael Huber, will also go to the convention.

The Board of Estimates today authorized $10,629.92 as reimbursement for Young, Stokes and Young’s staff to attend the meeting.

Travel requests have not yet been submitted by Mayor Rawlings-Blake, Deputy Mayor Colin Tarbert and BDC president Cole to the spending board.

As in years past, scores of Baltimore developers and attorneys are registered to attend the 2016 convention.

Among those listed on the website are Jon Laria, the Ballard Spahr lawyer who represents Sagamore in the Port Covington project; Kira Paterakis of H&S Properties, developer of Harbor East; and Blake and Reed Cordish of The Cordish Companies.

While Baltimore City is well represented at the convention, the RECon website currently lists no major political figures from other Maryland jurisdictions except for Rushern Baker III, Prince George’s county executive.

Baltimore County, for example, is not listed as sending any officials to the convention, according to online registration.

Harford and Anne Arundel counties are listed as sending one representative each– their economic development officer.