Worried about Port Covington’s possible impact on the city’s credit rating, the Rawlings-Blake administration is seeking an independent “conduit” to issue $660 million worth of bonds to pay for improvements sought by Under Armor’s CEO Kevin Plank for his proposed waterfront community.

The use of a third-party issuer was described as “a new twist” to the TIF (tax increment financing) legislative package by Deputy Finance Director Steve Kraus.

Kraus informed the Board of Finance of the plan yesterday. Two weeks ago, the board approved “in concept” TIF bonding with the city as the direct issuer.

The panel – headed by Mayor Stephanie Rawlings-Blake (who was represented by chief of staff Kaliope Parthemos) and Comptroller Joan Pratt – unanimously approved the legislation, which is expected to be introduced to the City Council at its next meeting on May 16.

“Given the magnitude of this financing and the effect it may or may not have on the city’s credit, this legislation allows for a state conduit to issue these bonds on our behalf,” Kraus told the board. “In doing so, according to current accounting rules, it [Port Covington TIF bonds] would not be considered city debt and not be on the city’s debt profile.”

Such an arrangement would require the support of Gov. Larry Hogan, who has voiced enthusiasm for Plank’s project and recently squired him around a meeting of the National Governors Association.

Lining up State and Federal Dollars

Maryland Transportation Secretary Pete K. Rahn has committed $33 million to improve Interstate-95 access to Port Covington as long as the city matches the grant with $43 million in TIF funds.

Plank’s real estate arm, Sagamore Development Co., is also applying for a $81 million FASTLANE (Fostering Advancement in Shipping and Transportation for Long-term Achievements of National Efficiencies) grant administered by the U.S. Department of Transportation. Four Sundays ago, Plank was President Barack Obama’s guest at a golf outing at the Caves Valley Golf Course in Owings Mills.

Each of these pools of money would amount to a down payment of the full amount of public funding sought by Sagamore – $224 million from the federal government, mostly for new ramps to I-95, and $349 million from Maryland for road improvements and a light-rail spur.

Sagamore began quietly buying up industrial land in Port Covington in 2013, and has amassed 160 of its projected 260 acres. It says it plans to use 50 acres for Under Armour’s new global headquarters.

The remaining flatlands would, over a period of 30 years, be converted into a mini-city of high-rise office buildings, myriad entertainment and recreational features, an artificial lake, and 7, 000 apartment units. 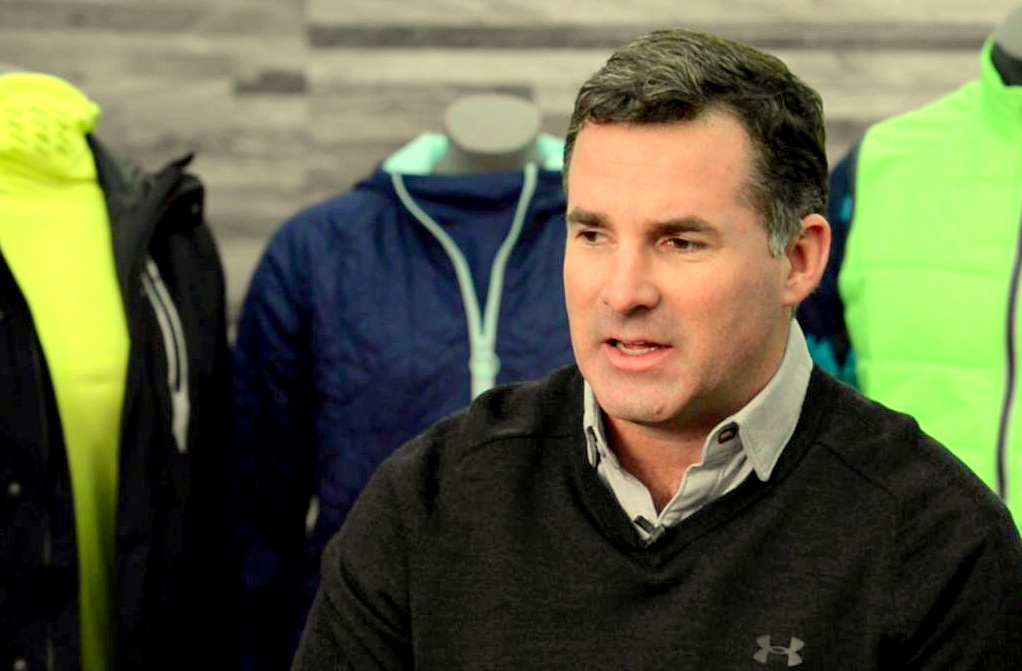 Kevin Plank owns the private development company that is seeking $660 million in TIF bonds as well as $573 million in state and federal funding for infrastructure improvements. (USA Today)

Concern that floating the Port Covington bonds would jeopardize Baltimore’s credit rating has been among the undertow of worries rippling underneath the surface of official support for the project, advertised as the biggest urban redevelopment proposed in the country and described by Mayor Rawlings-Blake as a “game changer” for Baltimore.

Back in 2011, TIF and general obligation bonds constituted 2.66% of the city’s assessable tax base. Since then, the city agreed to float more than $120 million in TIF bonds for Michael Beatty’s Harbor Point, and has agreed to millions more in TIF financing for the University of Maryland’s Biopark and for a housing mega-complex at Poppleton that has yet to get off the ground.

Kraus, chief of the bureau of treasury management in 2011, said the amount floated should remain below 4% – a target that Plank’s request would blow straight through.

According to Kraus, the $660 million of bonds to be issued would net out to $535 million for infrastructure improvements. The site, a former waterfront terminus of the Western Maryland Railway, has few roadways. Its sewers and water mains are inadequate to support a mini-city of 12,000 residents.

Plank wants TIF proceeds to tear out the existing roadways (including the key thoroughfares of Hanover, Cromwell, McComas streets), re-route and expand sewers and water lines, erect a grid of 42 new city blocks, and add such amenities as waterfront parks, a trolley line and a lake.

The difference between the TIF issuance price ($660 million) and the infrastructure proceeds ($535 million) will be absorbed by a reserve fund of $66 million and capitalized interest of $50 million, which will give Sagamore three years of interest-free use of TIF money before the bonds are resold to market investors and Sagamore sells the land to private developers.

In addition, the city would have to pay underwriter fees and an additional premium to the issuer of the bonds, Kraus said yesterday.

The TIF bonds would be paid over 30 years by a special tax to be assessed on the difference between what the land was worth as of January 1, 2015 and what the land will be worth once office buildings, retail stores and housing units have been erected.

Thus, the trio of bills passed by the Finance Board yesterday, which will be submitted next week to the City Council.

The legislation establishes a TIF district to encompass Sagamore-owned land,  authorizes a special tax for the district, and diverts property taxes generated by the project to pay for the bonds.

While no city taxpayer will be directly assessed for the cost of Port Covington, the city will lose the lion’s share of the increased property taxes from the development for a 30-year period.

Including interest on the TIF bonds (estimated at $1.4 billion), a total of $2.1 billion in property taxes is expected to be diverted from city coffers over those 30 years, according to calculations by Municap, the city’s financial advisor.

Over the same period, private investment is projected to total $3 billion, and more than 25,000 jobs are projected on the site, according to the developer, led by the anticipated increase in Under Armour’s headquarters staff from 2,000 to 10,000.

Kraus told the board that the city had considered using a third-party issuer for TIF bonds once before – for Pat Turner’s Westport project. The $160 million in TIF bonds authorized for the project by the City Council in 2008 were never issued.

Beset by the Great Recession and wobbly finances, the developer eventually declared bankruptcy as his $2 billion luxury community went up in smoke.

Last year, the only hard asset of Turner’s dreams –  40 acres of waterfront property at Westport– was sold to a subsidiary of Plank’s Sagamore Development at the bargain-basement price of $6 million.