Speakers, many wearing matching yellow tee shirts, lined up to praise the Port Covington project yesterday at a meeting of the Baltimore Planning Commission about the massive development  proposed on Baltimore’s south shore.

There was international sailing consultant and aspiring America’s Cup competitor Lynn Fitzpatrick, who said her team “eyes the two miles of waterfront with envy.”

There was Wayne R. Frazier, of the Maryland-Washington Minority Companies Association, who called it “the most transformative project ever to revive an American city.”

Yet another supporter was Kimberly Kacik, conservative commenter on Politichicks.com and a beauty pageant winner (Mrs. Baltimore 2014), who said, “This is going to bring lots of jobs to Baltimore, and I couldn’t be happier.”

“Kevin Plank created Under Armour because he was tired of sweating,” added supporter Ray Bennett, a resident of Catonsville. “The man has vision. He speaks with clarity and he’s inclusive. . . So I say, even though there are issues here that concern many of us, let’s not sweat it.”

But even at this upbeat gathering, some of those “issues of concern” surfaced. 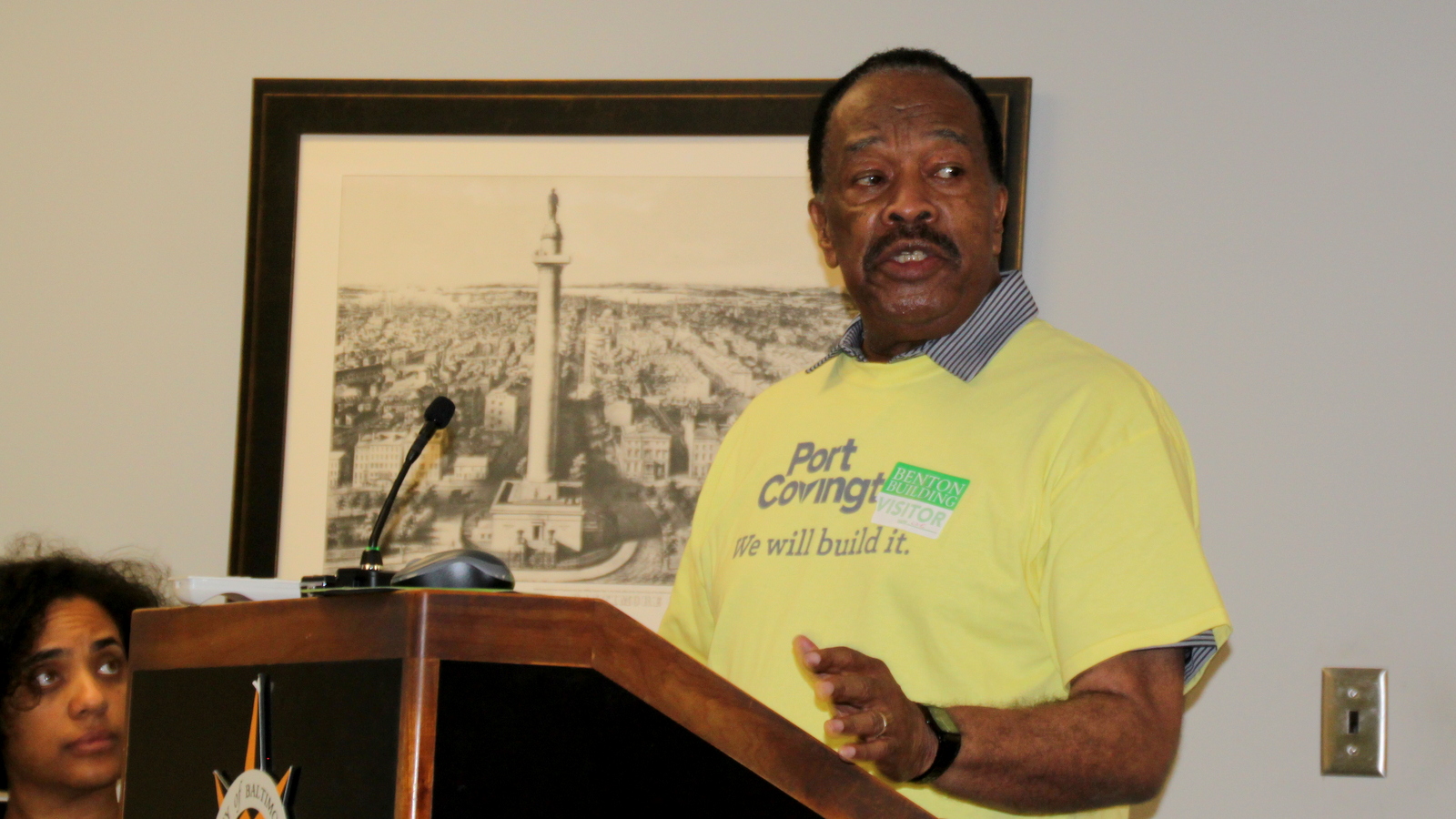 Planning Commission chairman Bill Cunningham said several times, “I notice a lot of housing advocates here,” perhaps referring to Jeff Singer and Lauren Siegel of Housing Our Neighbors who stood in the doorway looking into the crowded room.

For the benefit of the advocates, Cunningham said, he had summoned Housing Commissioner Paul T. Graziano to explain why the project is getting an exclusion from Baltimore’s Inclusionary Housing law. Graziano noted that, given the scope of the project, $183 million in city funds would be required .

“Whoa, that TIF is $535 million!” a man in the back said, prompting a rebuke from Cunningham, who told him to “take it outside.”

Graziano was ostensibly referring to the city’s chronically anemic Inclusionary Housing Fund, which has about $70,000 in its coffers at present.

He went on to explain a Memorandum of Understanding that Plank’s real estate company, Sagamore Development, signed with Mayor Stephanie Rawlings-Blake that specifies a 10% voluntary goal of affordable housing.

The scope of the new-city-within-the-city that Sagamore envisions on the Middle Branch of the Patapsco did come up for discussion and the numbers tossed around were staggering.

Asked by Cunningham, Paff said she couldn’t say what proportion would be rented vs. owned. (Sagamore’s application to the city says that 98.5%, or 5,252, units, would be rented and 1.5%, or 77, would be condominiums.)

“This is a 25-year project, right? So as we bring on each phase it all goes into the TIF underwriting process and everything else so we have to very carefully plan the phasing for the residential, the commercial, the infrastructure,” Paff said.

“We want to build the market in Baltimore. We don’t want to get over our skis on this and to cannibalize the market.”

Paff, along with a Planning Department staffer, led the audience through a Power Point presentation of the master plan, pointing out the seven tall buildings that dominate schematics of the future development.

“I joke about – those are our Easter island buildings,” Paff said.”We want tall buildings, but we want them to be iconic.” 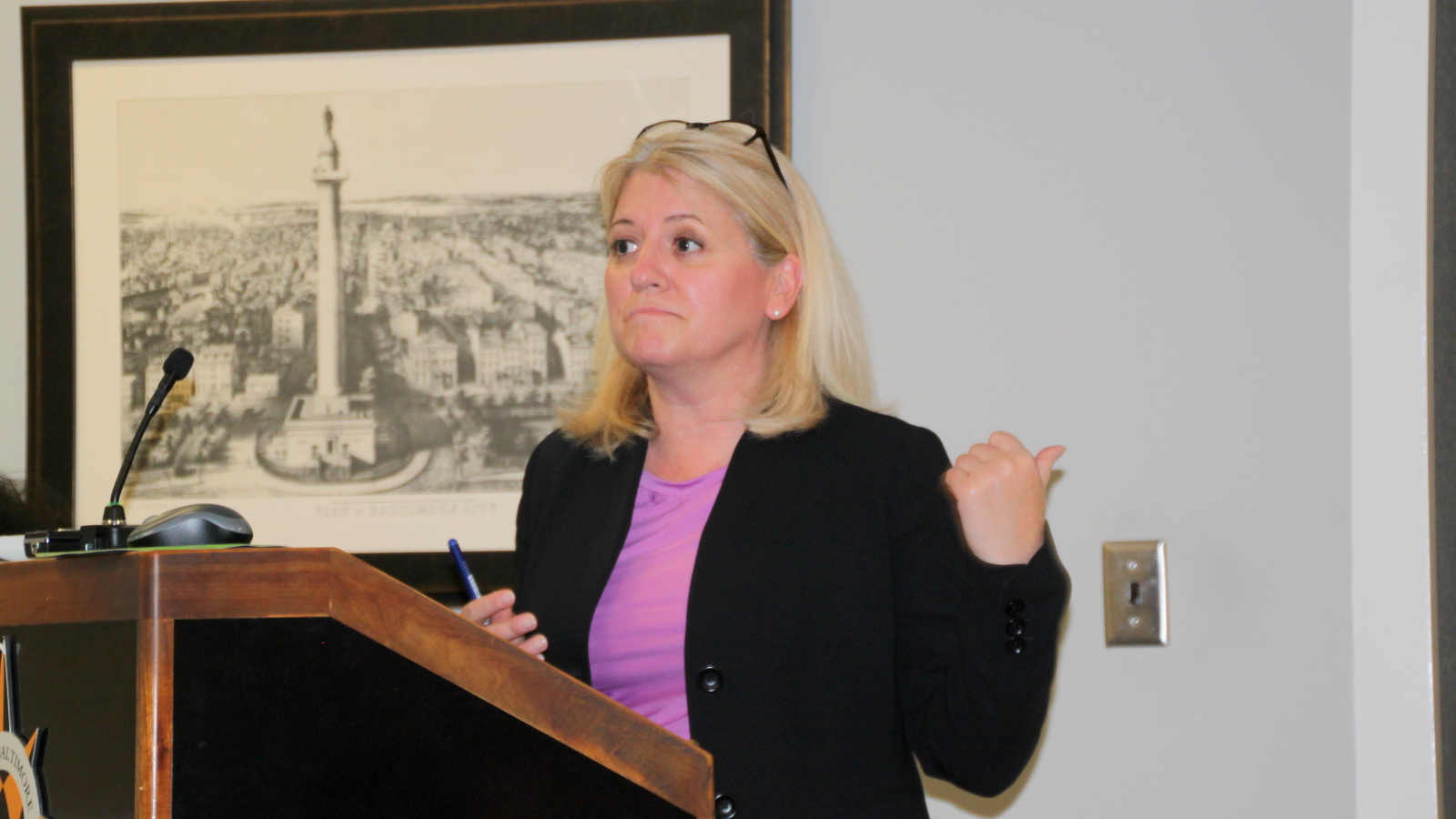 It is a proposed new stable building for the Baltimore Police Department’s horses.

“Kevin wants to build the mounted unit a new facility at Port Covington. Right now they are in a facility under the JFX,” she said.

Explaining that Plank’s company, Sagamore Development, is named after his Baltimore County horse farm, she added, “We have an affinity for horses.”

The new stable would improve the quality of life for the horses, “but also be a place where the community can positively engage with the police department with horses,” she said.

The lead-off citizen speaker at yesterday’s Port Covington hearing was Michael Middleton, whose community of Cherry Hill and five other South Baltimore neighborhoods formed a coalition called SB-6 to negotiate with Sagamore and the city.

Noting that these communities are some of the most underserved in Baltimore and sometimes referred to as “the armpit of the city,” Middleton said his group was pleased with the developer’s offers to include them in “a partnership,” and said they “applaud” the master plan.

“As they say a rising tide lifts all ships – and there are at least six ships around Port Covington,” he said, as the room rippled with laughter. 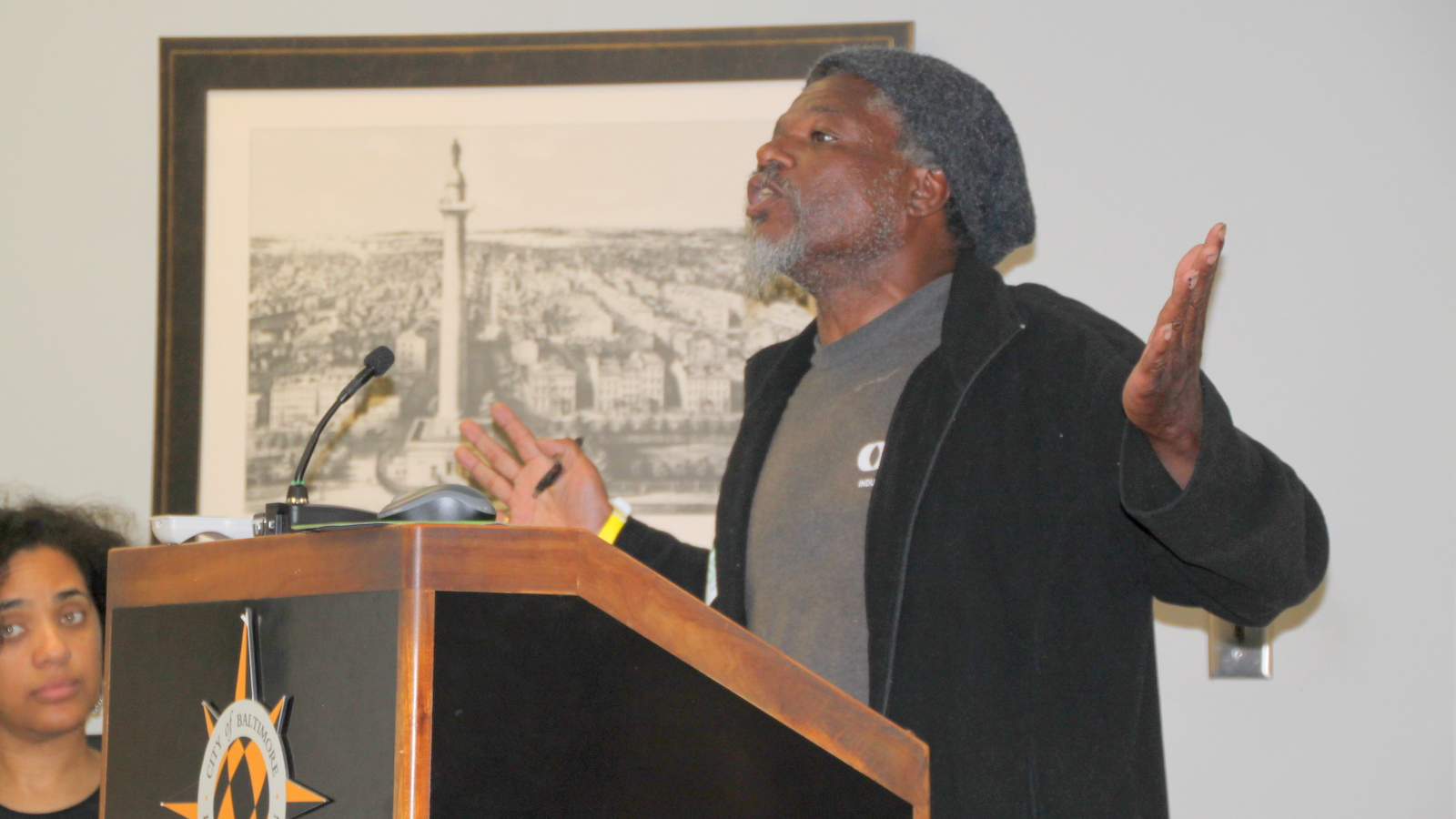 The next speaker, however, was skeptical, directing his opening remark to the commissioners themselves.

“My question to you is, are you actually going to be alive when this master plan is done?” housing advocate Anthony Williams said, prompting Cunningham to say, “We’re asking the questions here.”

Spector broke the tense moment with a joke that elicited more laughter, but Williams persisted.

“How many people will actually benefit like the six ships he’s talking about and in the other areas of Baltimore city like east, west?” he said, going on to talk about “the diversion of money” from other areas such as schools, housing affordability and homelessness.