Making a big ask of a bruised and cash-strapped city, Under Armour CEO Kevin Plank has been working for months to persuade the public that the massive mixed-use development he wants to build at Port Covington is just what Baltimore needs, and worth the $660 million public financing package he seeks to build it.

The campaign, waged by a team of publicists hired by Sagamore Development, Plank’s real estate firm, has paid for hundreds of thousands of dollars worth of print and prime-time broadcast ads, sent mailers to households across the city, intermingled with elected city officials in Las Vegas and kept up a steady stream of social media messaging.

Mayor Stephanie Rawlings-Blake has taken to Twitter to tout the project, not just calling it “a game changer” (the same phrase she used to promote the Baltimore Grand Prix), but rebutting critics who see the tax increment (TIF) bonds that Plank is seeking as a sweetheart subsidy for a billionaire.

Here was one exchange:

“You do understand the TIF is not a tax break correct?” @MayorSRB replied, with a link to the Port Covington-produced YouTube video titled, “What is a TIF?”

“Yeah and I realize when my mayor is being condescending,” @tinyb2000 shot back. 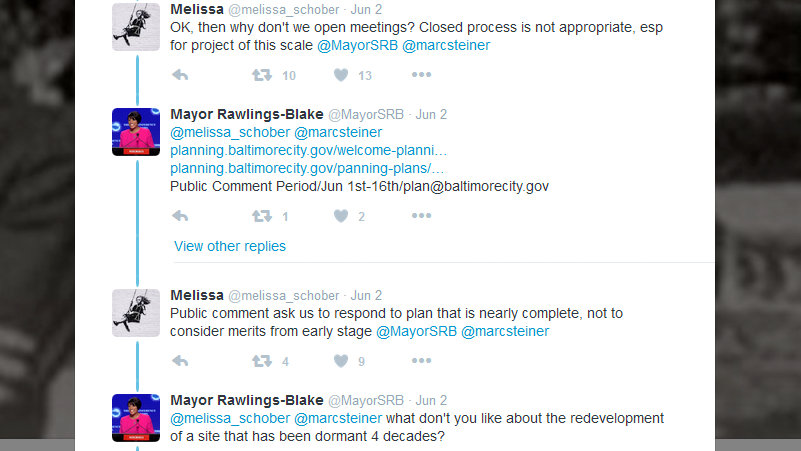 An online exchange over Port Covington between the mayor and a Charles Village resident earlier this month. (Twitter)

As the project approaches another milestone in its dash toward approval today, with the Planning Commission expected to approve the Port Covington Master Plan, it’s a battle that is being joined not just in 130 characters, but in detailed analyses by some of the area’s most prominent progressive voices.

“The Port Covington Master Plan is a prime example of structural inequality on a massive scale — and of the same old waterfront-focused economic development approach that hasn’t worked to reverse Baltimore’s decline, and may have contributed in fact to the disinvestment in other neighborhoods,” wrote Barbara Samuels of the American Civil Liberties Union, in a 13-page critique of the Master Plan.

“Will we create a plan that will affirmatively further fair housing as the 1968 Fair Housing Act and the 2015 HUD rule mandates?” Brown writes in comments being submitted to the commission. “Or will we intensify segregation in Baltimore by creating a luxury community and a majority White residential area?”

Brown’s critique comes as part of a petition that calls, as does the ACLU of Maryland and the Public Justice Center, for the Master Plan to be rejected and a more inclusive deal negotiated.

Rejection doesn’t appear likely given the project’s strong support from City Hall and the generally pro-development stance of the nine-member Planning Commission.

At an earlier public hearing on the Master Plan, the commissioners asked few questions, and most of the speakers – many of whom wore yellow Port Covington tee-shirts – were supportive.

The 65-page document that is the subject of today’s public hearing, scheduled at 2:30 p.m. on the 8th floor of 417 East Fayette Street, lays out the street configuration, building uses and massing for the 260-acre project.

Centered around a new world headquarters for Under Armour, Port Covington is envisioned by Sagamore to include restaurants, retail space, public parks, boat slips, hotels, an artificial lake, and more. In its application to the city, there are promises of apartments for 12,073 residents by year 2040 and projections of 16,758 office jobs.

Much of the residential construction would not take place until after 2030, while more than half of the infrastructure costs – to be paid by TIF bonds – would occur in the first four years of the build-out.

In a media statement, Sagamore president Marc Weller said the company has been inclusive, working with faith leaders, non-profits and community groups, while in an op-ed in the Baltimore Sun, Plank Industries CEO Tom Geddes said that the “potentially extraordinary” new community laid out in the Master Plan will benefit the city.

He added, “It cannot meet every unmet economic need of every family in Baltimore, but its impact will be considerable.”

The project’s critics argue the opposite will happen.

The ACLU and Public Justice Center analysis concludes that Port Covington will be “a brand-new racially and economically segregated city within the city, a virtual gated enclave, inhabited by millennials and empty nesters making an average income of $100,000.” 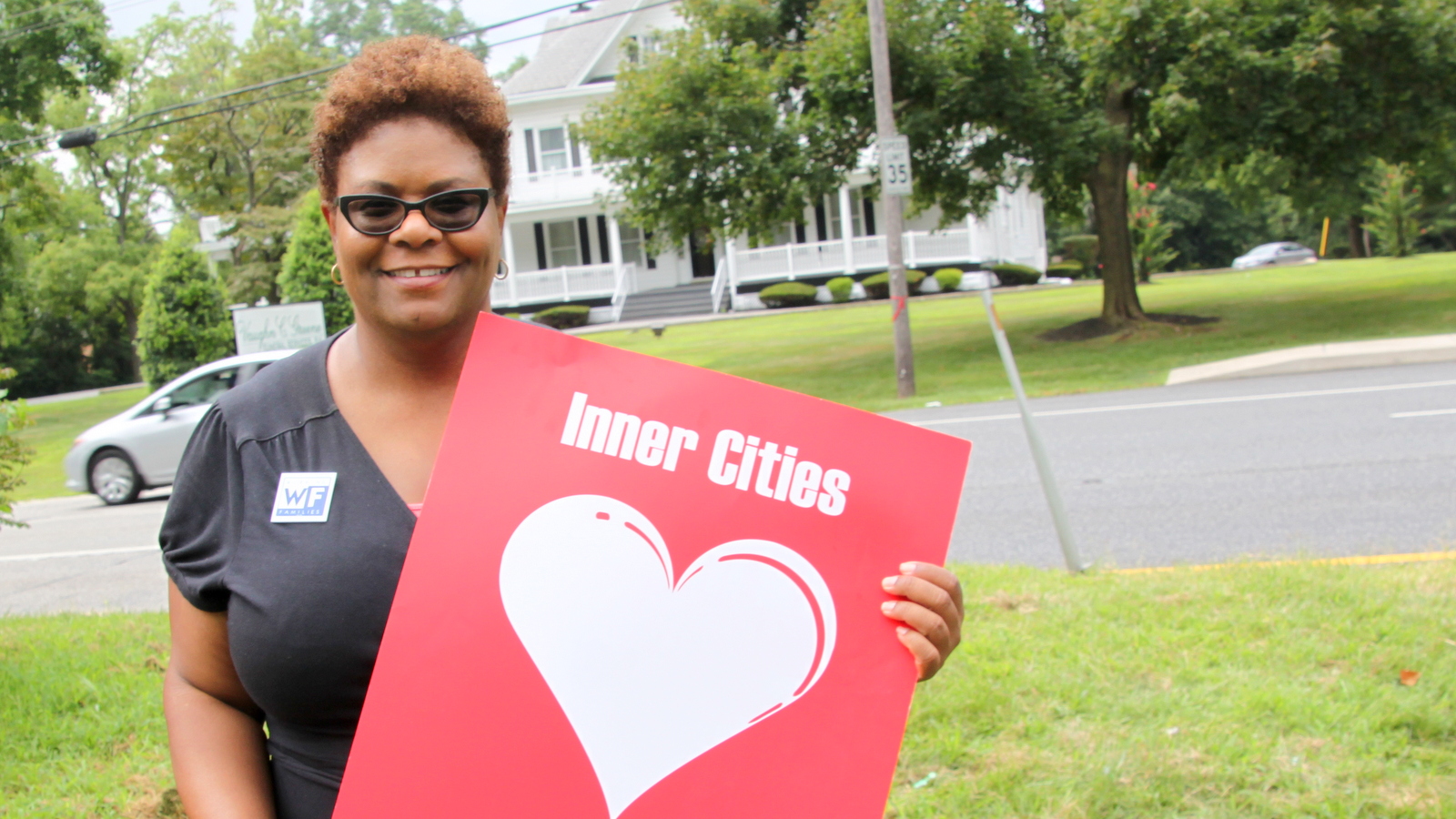 With only a third of the jobs expected to be held by city residents – and an expected $26,745 average annual for retail full-time employees in the development’s entertainment district – the Master Plan as drafted portends little benefit for city residents, Samuels and her co-authors conclude.

A major part of their critique is the plan’s failure to comply with the city’s Inclusionary Housing Law, from which Housing Commissioner Paul T. Graziano has declared Port Covington officially exempt.

The authors dismiss as “mere tokenism” a Memorandum of Understanding the mayor recently signed with Sagamore Development that specifies a voluntary goal of 10% affordable housing and other provisions.

Brown, Samuels and the other Port Covington critics don’t argue that the redevelopment should be scrapped altogether.

Increasing the minority component of the project by honoring federal and city fair housing laws, Brown argues “would be a magnificent achievement.”

“We want transparency on the deal, we want accountability if something goes wrong,” she said, “and we want a significant ‘good jobs guarantee’ that any and all jobs created by this taxpayer investment will include local hiring, living wages, full benefits and paid leave.”