More accustomed to battling developers over sprawl-inducing zoning laws and road projects, the “smart growth” group 1000 Friends of Maryland found itself in an awkward position last night – standing with the team proposing the biggest development in Baltimore history, Port Covington, as picketers chanted outside.

Even more awkwardness ensued after a protester interrupted a speaker at the $40-a-head fundraiser held in the developer’s waterfront City Garage building.

Guests had just finished snacking on bacon-wrapped figs and sipping Sagamore Spirit rye whiskey and had settled in to hear speakers from Sagamore Development, the real estate arm of UnderArmour CEO Kevin Plank, when Anthony Williams, of the advocacy group Housing Our Neighbors, strode onto the stage.

“Certainly the leader in sports apparel that prides itself on cutting-edge technology could come up with a way for there to be affordable housing. But you refuse!” said Williams, who identified himself by saying, “I am currently homeless, and I live on the steps of a church downtown.”

(This happened just as Sagamore president Marc Weller had gotten to a slide that touted the booming success of UnderArmour, the future Port Covington’s anchor business, noting the sportswear-maker’s “24 consecutive quarters of 20%+ growth.”) 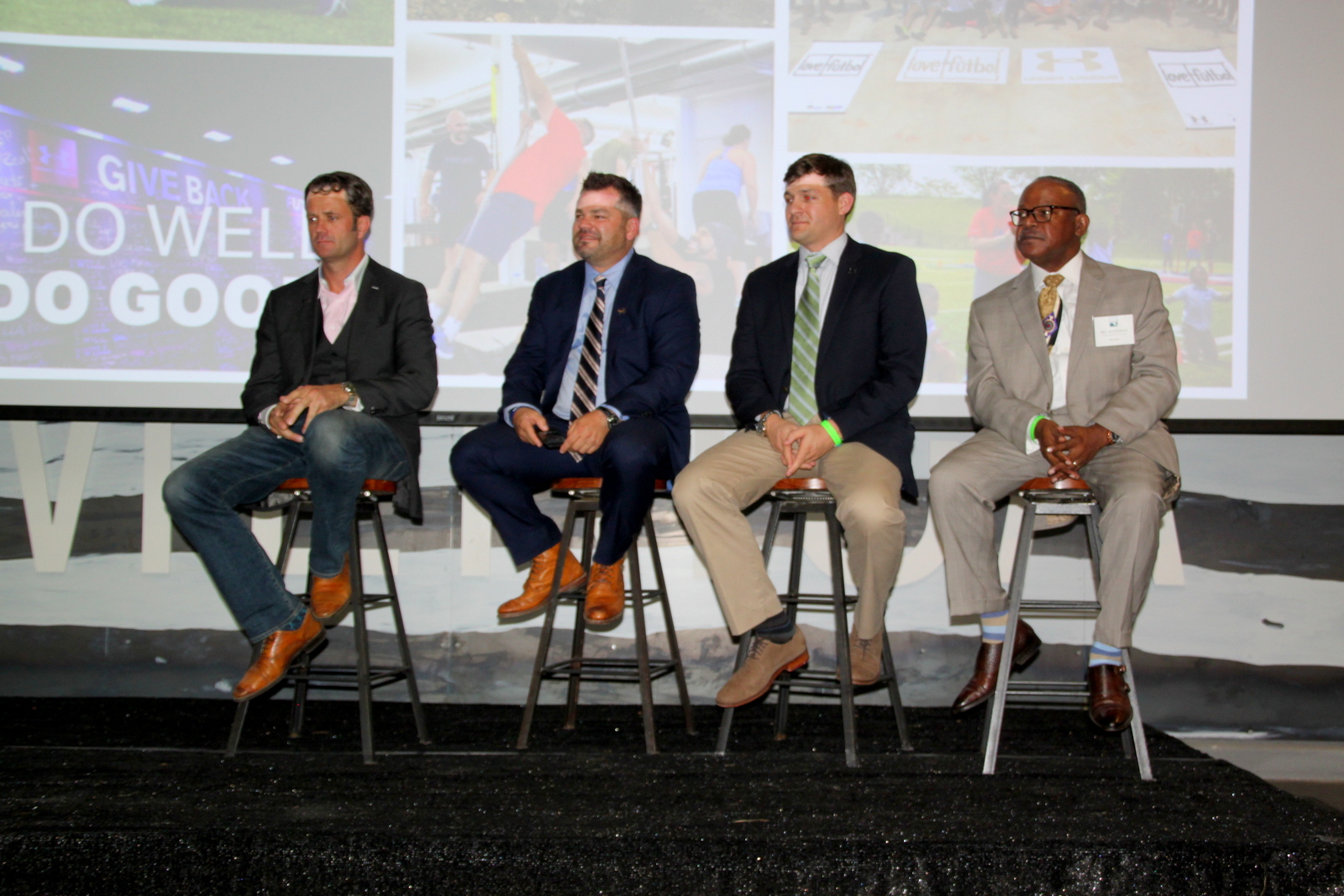 After a minute or two, Williams was escorted offstage by security guards, one of whom shoved another activist, Todd Cherkis, in the chest when he tried to intervene. A third person attempted, unsuccessfully, to hand the Sagamore group a “Most Exclusionary Developer of the Year” award.

Weller resumed and the program continued, ending with questions from the audience (written on cards) that ranged from “are you going to make jogging trails out of recycled Under Armour tee shirts?” (the answer was, “maybe”) to “what are you doing to work with the local adjacent communities to make sure this new community benefits them?”

Weller explained that a coalition of South Baltimore neighborhoods, SB6, is negotiating with Sagamore as the company seeks an unprecedented $660 million in city-backed Tax Increment (TIF) bonds.

“We’re coming to an agreement that will meet all their needs and concerns and. . . hope to announce something in the next few weeks,” he said.

Asked afterwards about the activists’ disruption, 1000 Friends executive director Dru Schmidt-Perkins said the group recognized the concerns and saw the event featuring Sagamore as an opportunity for people to get information about an important and controversial project in the city.

“One of the things we wanted to do was provide a forum where those question could be asked,” she said. “We would have preferred it not be asked with a disruptive bullhorn, which is what we were trying to do here.”

Another purpose of the event was fundraising.

For Sagamore, getting an introduction to 1000 Friends’ demographic was just one part of an upbeat day.

A lengthy piece yesterday in Bloomberg BusinessWeek described Plank’s affinity for the “edgy gritty city of John Waters and The Wire,” which he “has adopted as his own,” noting that Plank grew up in the D.C. suburb of Kensington and now lives on a 530-acre horse farm in Baltimore County once owned by the Vanderbilts.

“People like Tom Brady and Colin Powell come up for the weekend and are like, ‘I had a different image of what Baltimore would be,’ ” Plank says in the piece. “And it’s only 17 miles north of the city.” 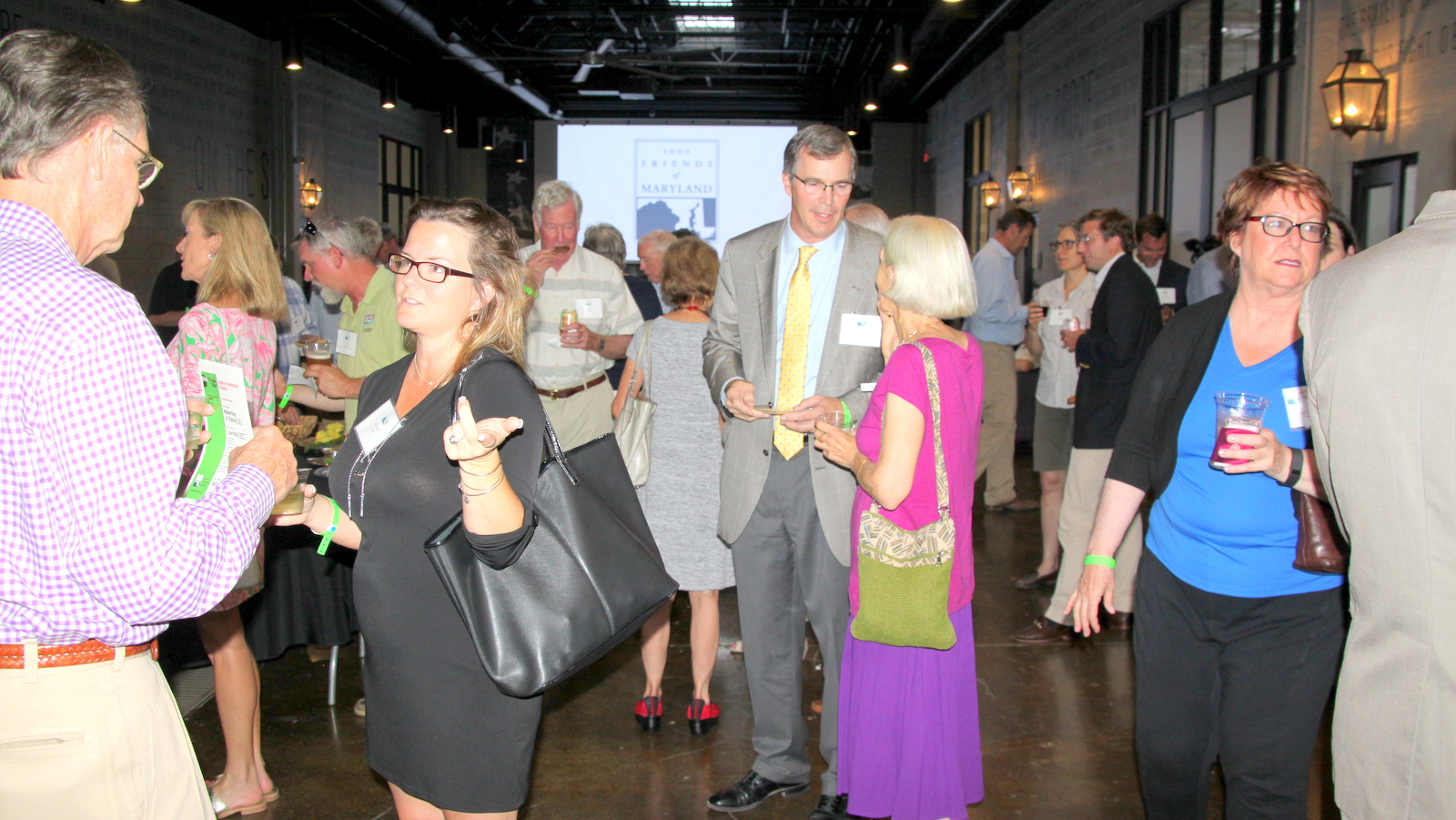 The crowd at City Garage for last night’s “Inside the Mind of the Sagamore Development Company” fundraiser. (Fern Shen)

The main thrust of the article, as well as the presentation at Sagamore’s City Garage “maker space,” was to profile the growing company’s investment in the city and promised benefits it would bring as Port Covington’s anchor.

The sportswear and athletic shoemaker is building a new headquarters on the site and predicts that development envisioned to rise there over the next 30 years – to include retail, apartments, hotels, parks and more – will create jobs and attract $5 billion in private investment.

“We are too great a nation to limit ourselves to small dreams,” the voice of Ronald Reagan boomed from his 1981 inaugural address in a video the Sagamore group played for the audience. “Let us begin an era of national renewal.”

Coinciding with the Bloomberg article and the event was the ribbon-cutting earlier in the day for Under Armour’s Lighthouse, which it also describes as its Manufacturing and Design Leadership Center. The 35,000-square-foot building is intended to develop best practices for modernizing the apparel manufacturing process.

“They’re doing nothing short of disrupting the existing manufacturing system,” he said. “They’re creating a new process for the way manufacturing is going to be done and they’re disrupting what is hard to believe is a 100-year tradition that’s changed little, if any, in the apparel manufacturing business.”

Making manufacturing more efficient through downsizing and automation seem to be what that disruption means.

“Today the way your shirts and your shoes are done it’s the exact same way since Henry Ford rolled that first Model A, that Model T off the line,” Costa said. 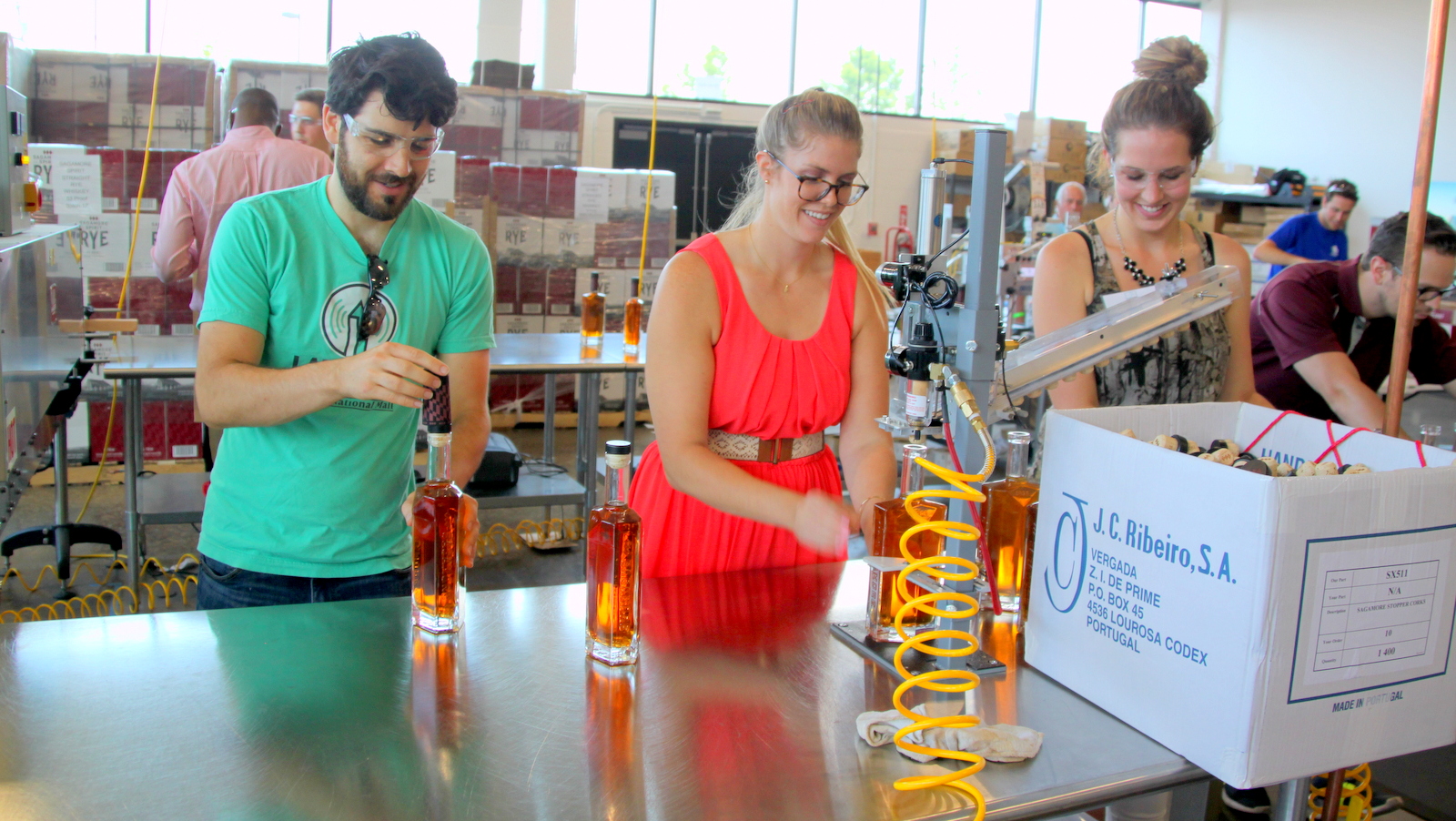 Volunteers demonstrate the labeling process for Sagamore Spirit rye. The whiskey distillery is one of many businesses that are part of the Port Covington project. (Fern Shen)

While the Sagamore speakers focused mainly on orienting the audience to the elements of their waterfront redevelopment, Rev. Alvin C. Hathaway, Sr. was on hand to orient the audience to the constituencies concerned about equity issues and fair housing.

Hathaway noted that his church, Union Baptist, is in West Baltimore “at the fourth stop along Freddy Gray[‘s police van ride]” and that it is also near “one of the key areas where The Wire was filmed” – a neighborhood “where the average income is $11,000 a family.” 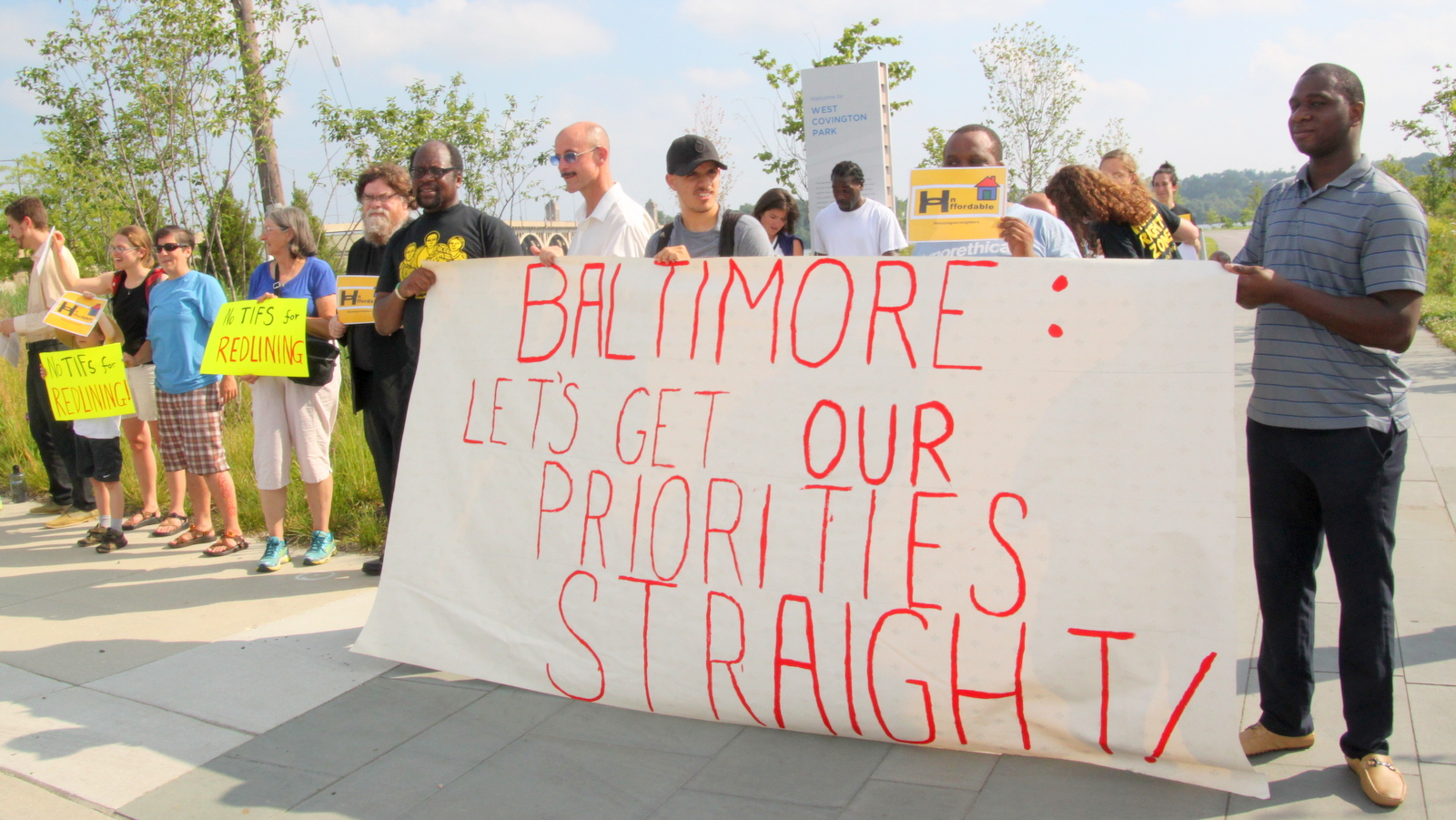 As with the other speakers, Hathaway steered clear of the specific critique being made by Housing Our Neighbors and other groups who say the project will worsen segregation and divert funds from other needs for city residents far from the wealthy waterfront.

On the question of TIFs, Hathaway pointed the audience to Sagamore’s “What is a TIF?” video.

On local benefits for impoverished communities, he said he is helping to negotiate community benefits for Port Covington and cited his efforts he said were successful to do likewise for past redevelopments. (He cited Harborplace, the Superblock, State Center, Harbor East and Harbor Point as examples of his work.)

“It’s important that you have people who can articulate the pain that people feel,” Hathaway said.

“I try to help developers understand how you take that pain and make it a programmatic initiative.”

Here’s Real News Network’s video of the demonstration outside.