The words by former Baltimore Mayor Kurt L. Schmoke are upbeat and passionate.

“This is an amazing opportunity for Baltimore,” proclaims a bylined opinion piece by the three-term mayor published yesterday in The Baltimore Sun.

The op-ed goes on to endorse the mixed-used development at Port Covington, which is seeking nearly $700 million in tax increment (TIF) funding from the city.

Not only is Port Covington exciting news for the “predominantly African-American neighborhoods” around the site, according to the op-ed, but it exemplifies the generosity of Kevin Plank, CEO of Under Armour, who “could move his company anywhere in the world,” but instead has “put huge amounts of his own personal resources to work to bring significant outside investment into our city.”

These laudatory words – and hundreds more contained in the Sun op-ed – were drafted by Plank’s real estate company, Sagamore Development, and were used nearly verbatim in the opinion piece.

On June 24, Alicia Wilson, vice president of community affairs and legal advisor at Sagamore Development, emailed “community and faith leaders” in Baltimore asking them to endorse an op-ed written in response to a critical piece by Morgan State University Professor Lawrence Brown in The New York Times.

“We have drafted a response to the Op/Ed done by Lawrence Brown,” Wilson wrote. “Would you be willing to sign along with other community and faith leaders.”

The email – containing Wilson’s address and Sagamore’s logo – included the text of the response, an 839-word defense of the project written from the perspective of black leaders and couched in the voice of individuals speaking out independently.

“The unrest last year was sparked by a senseless tragedy but borne of a valid sense of injustice. . . The answer is not to get up at a microphone and criticize those trying [to] create new advancement opportunities. The answer is not to alienate those who want to invest in Baltimore and its people.” 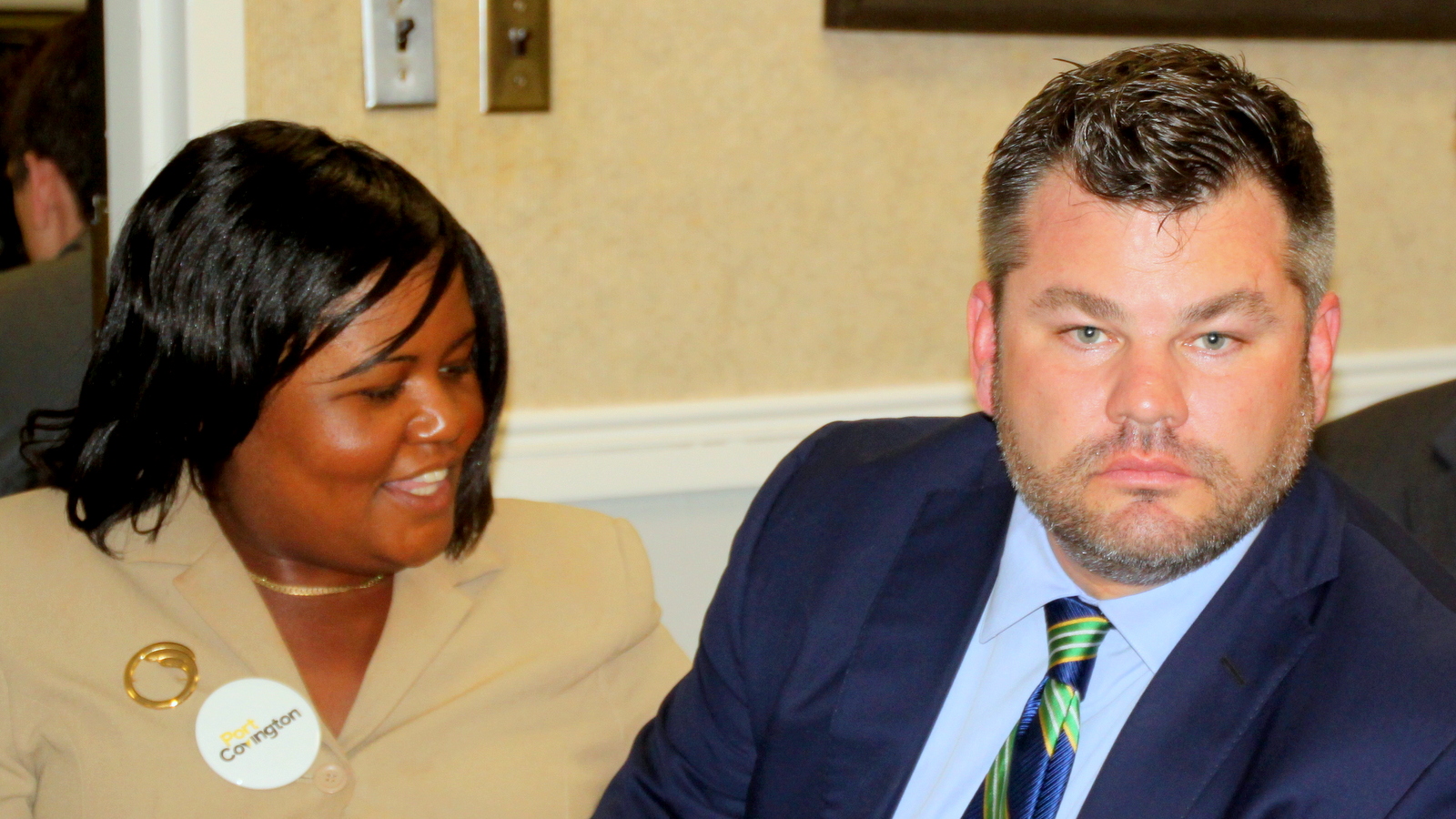 “By many objective standards, redeveloping Port Covington will create a thriving hub of opportunity from an area that currently lays fallow and is awash in garbage. The community associations of the adjacent neighborhoods — predominantly African-American neighborhoods — are excited to finally see real investment in the long-neglected Port Covington, investment in which they and their families will share.”

The exact wording (except for “born from” replacing “borne of” in the first sentence above) appeared in the op-ed containing Schmoke’s byline.

We have phoned and emailed the former mayor, currently president of the University of Baltimore, but have not received a response.

We have also emailed questions about the op-ed to Andrew Green, editorial page editor of The Sun, Renee Mutchnik, spokeswoman for the Baltimore Sun Media Group, and Alicia Wilson of Sagamore – so far to no avail.

UPDATE #1: “The July 6, 2016 op-ed ‘Embrace Port Covington, Don’t Throw it Away’ by Kurt Schmoke was represented to us as the work of the people who signed it,” Mutchnik said in an emailed statement. “The Baltimore Sun followed our standard protocol for publishing op-eds with multiple signatures.”

Neither The Sun nor Sagamore answered our specific questions about who approached the newspaper about the pro-Port Covington opinion piece and who approved it at the newspaper. Sagamore did not explain why their involvement in preparing the op-ed was not disclosed and the article was presented as independently written.

UPDATE #2: Schmoke responds, says he was given a draft of the letter by “a friend who is not a Sagamore employee.” His full response also appears below.

The op-ed says that Schmoke attended “dozens of community meetings on the future of Port Covington.”

Not disclosed is the specific role that Schmoke played in the project.

As a director of the Baltimore Development Corporation, Schmoke put his stamp of approval on the $660 million TIF subsidy for Port Covington on March 24, according to BDC board records. There is no record of the former mayor attending “community meetings” that have been held in Cherry Hill, South Baltimore and elsewhere.

Wilson’s call for others to “sign along” apparently induced at least seven clergy and business association figures to respond.

In its end-note, The Sun included the names of seven people who were “contributors to this op-ed.”

Here’s how John Maroon, a spokesperson for Sagamore Development, responded to our query about Wilson’s op-ed:

“The op-ed was a collaborative effort and was signed by a number of civic and faith leaders, all of whom fully subscribe to and endorse every word. We are pleased that these highly reputable leaders, along with many other community, elected and civic leaders of substance, are deeply supportive of our significant investment in Baltimore’s future.”

Here’s a late response we received from Kurt Schmoke:

“I was asked by a friend who is not a Sagamore employee if I would be willing to be a signer of a letter, along with a number of other people in the community, explaining our support of the Port Covington project. After reviewing a draft that was given to me, I suggested changes. Those revisions were accepted. I was then told that the Sunpapers would run the op-Ed if there was a lead author and a listing of contributors. I agreed to be listed as the lead author, although I would have been just as comfortable being listed among the contributors.

“I did not see a problem with my signing this piece because I have defended my support of the BDC recommendation in other forums. I don’t believe that it is inappropriate for a BDC board member to explain why he or she supported a particular project. In fact, I think the public might be more critical if a board member refused to offer such an explanation. I appreciate your writing to me concerning this matter.” 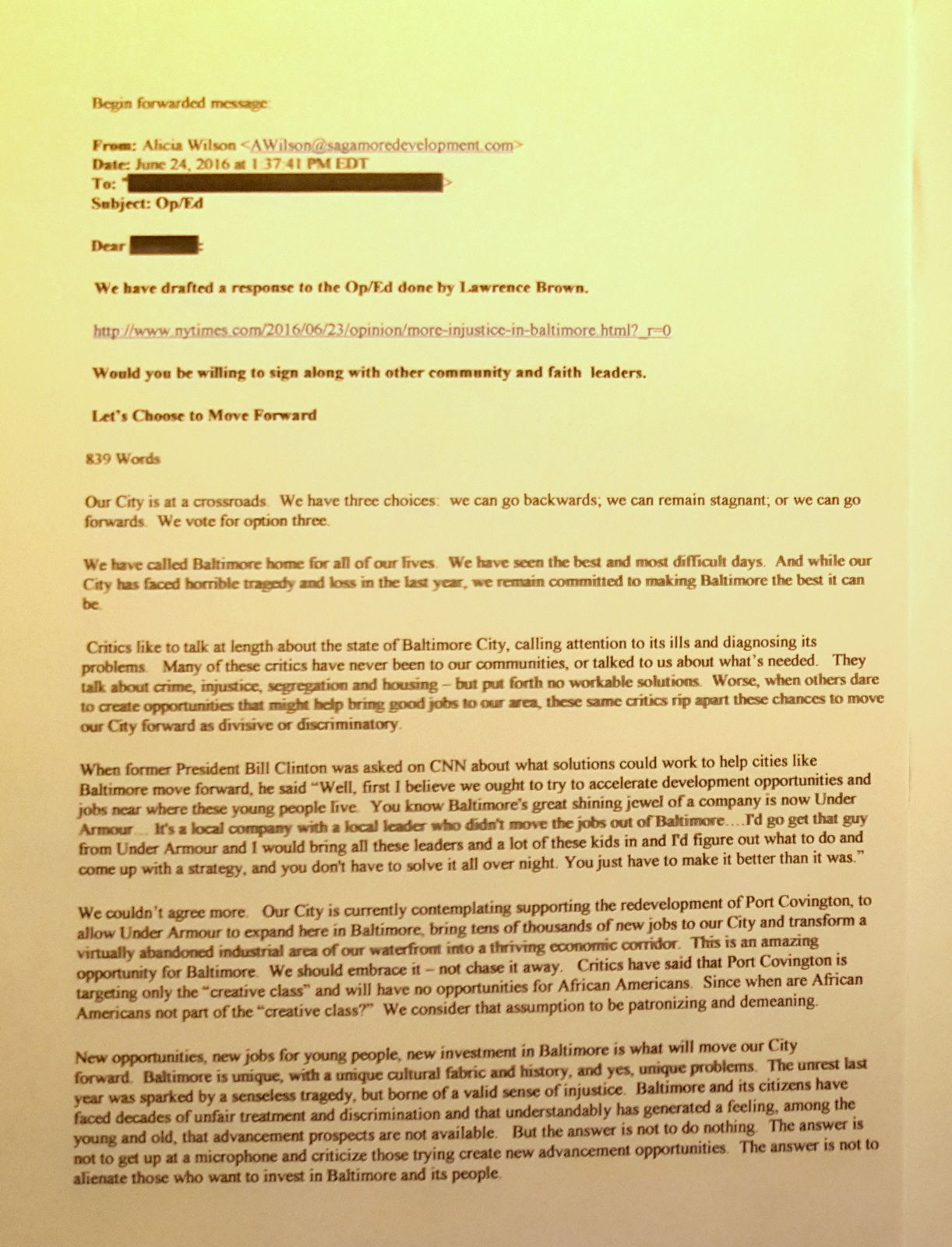 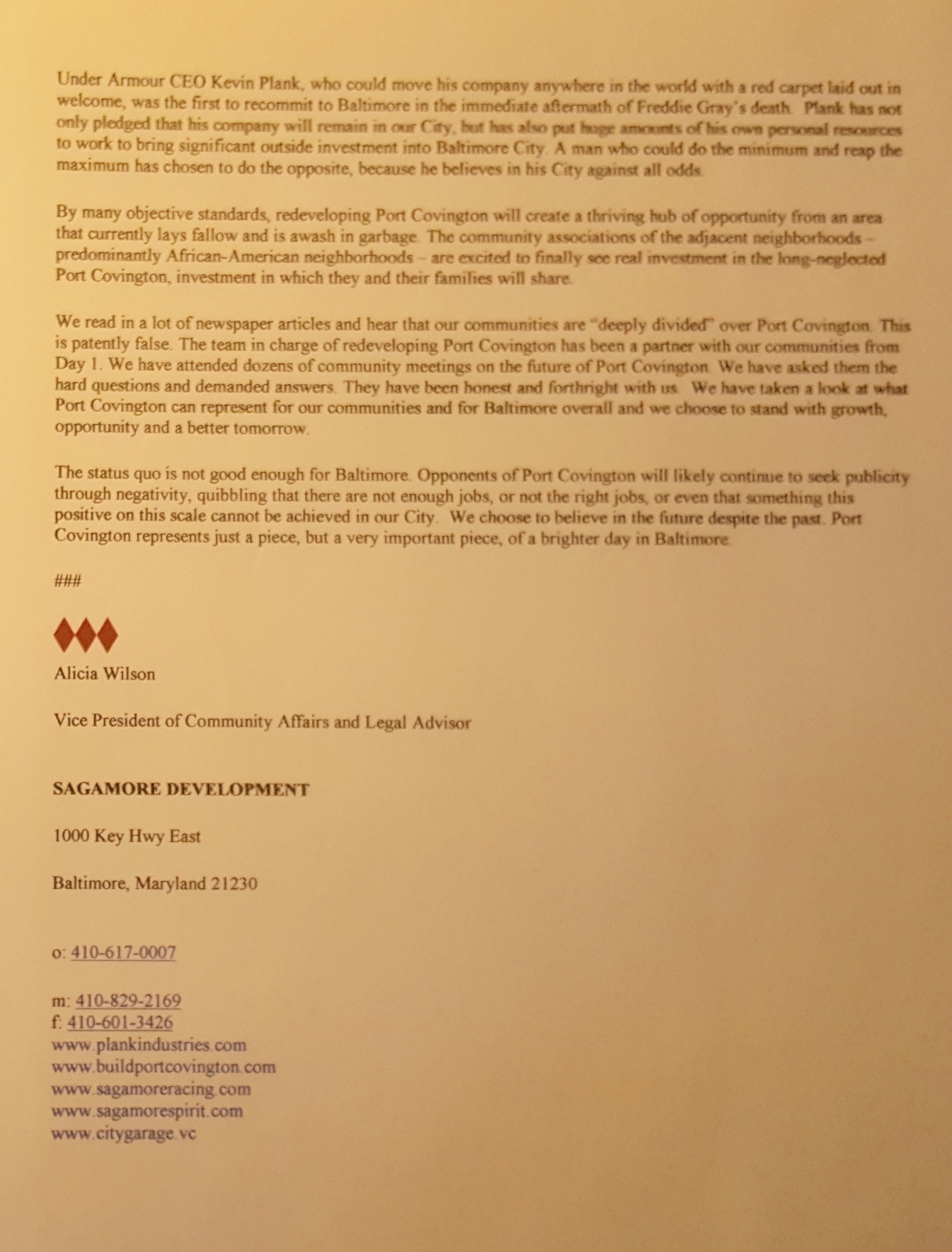