One of Baltimore’s oldest civil rights and faith groups, BUILD, came to Under Armour headquarters yesterday to say they have a memory “like an elephant” for “the failure of these big development deals to deliver their inflated promises.”

Among the Sagamore representatives receiving them at the Under Armour campus was Rick Abbruzzese of KOFA Public Affairs (the former KO Public Affairs) that was instrumental three years ago in helping the last big waterfront redevelopment, Harbor Point, navigate similar protests three years ago to secure a $107 million TIF for developer Michael Beatty.

“Manna would fall from heaven for those living uptown,” said Rev. Andrew Foster Connors, co-chair of BUILD (Baltimoreans United in Leadership Development), referring to the city’s assurances as subsidies were handed out to Harbor Point and a string of downtown developments before that. 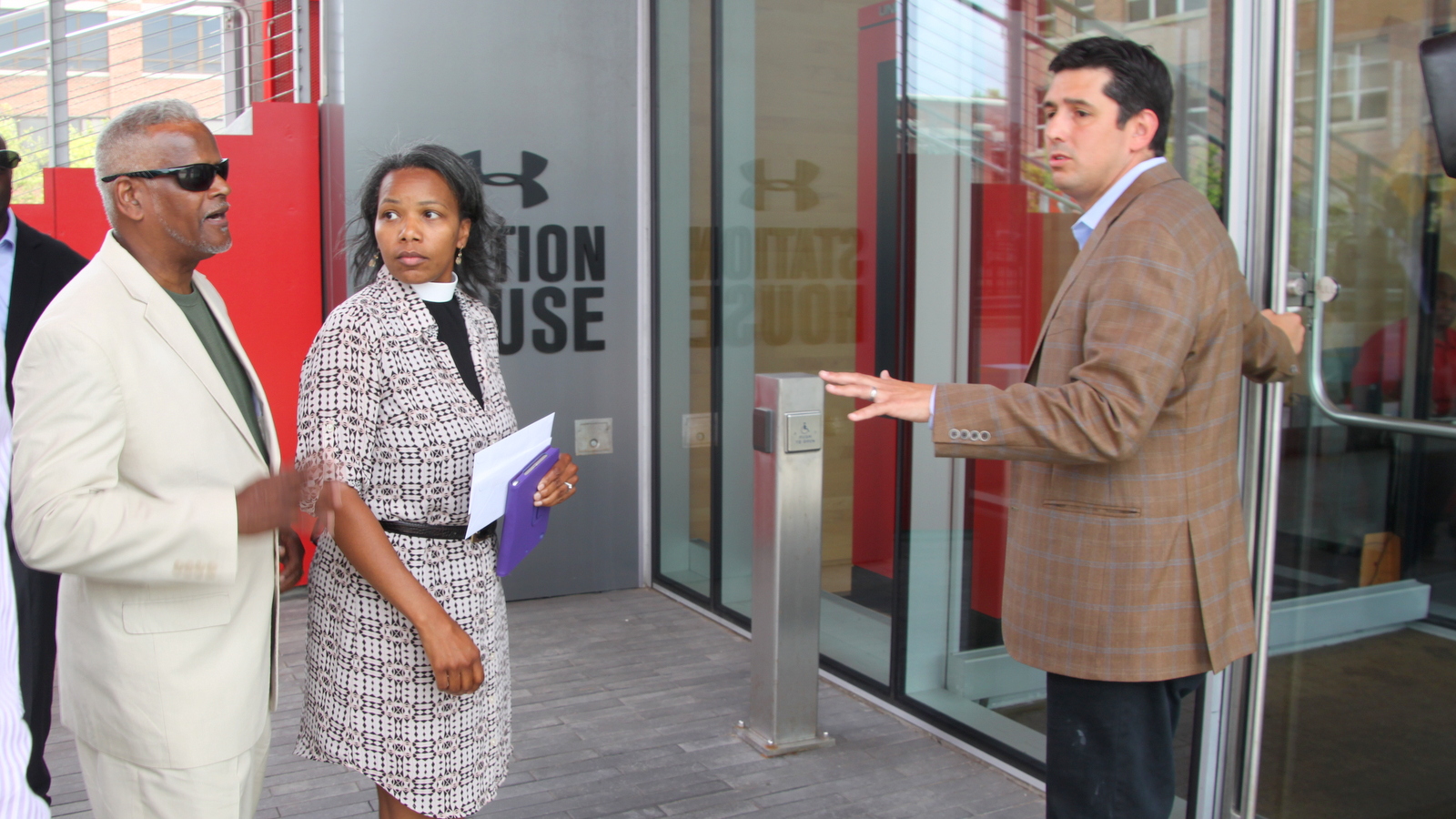 Publicist Rick Abbruzzese motions the media not to enter the lobby of Under Armour’s headquarters as he lets in two BUILD leaders. (Fern Shen)

Connors ticked off the earlier projects – the Inner Harbor, two sports stadiums, the Convention Center, the Hilton hotel and finally Harbor Point – and said they had in common “goals but no guarantees, promises that were never kept and lost opportunities to build, indeed, ‘One Baltimore.’ ”

Invoking last year’s protests and riot after the in-custody death of Freddie Gray, Connors said, “We warned then that our city had become two cities – one affluent and doing well because of downtown redevelopment and the other poor, black and young – shut out from opportunities to participate fully in the Baltimore they call home.”

The BUILD leaders delivered four demands to Plank yesterday that they said would “ensure the Port Covington development benefit the entire city” and asked the sportswear company CEO to personally meet with them.

“They told us Mr. Plank is a very busy man,” Connors reported, after Plank Industries CEO Tom Geddes spoke briefly with Connors, Huber and other BUILD members in the building’s lobby.

The group acknowledged it had met previously with Sagamore development officials, but its requests to sit down with Plank had been rebuffed. 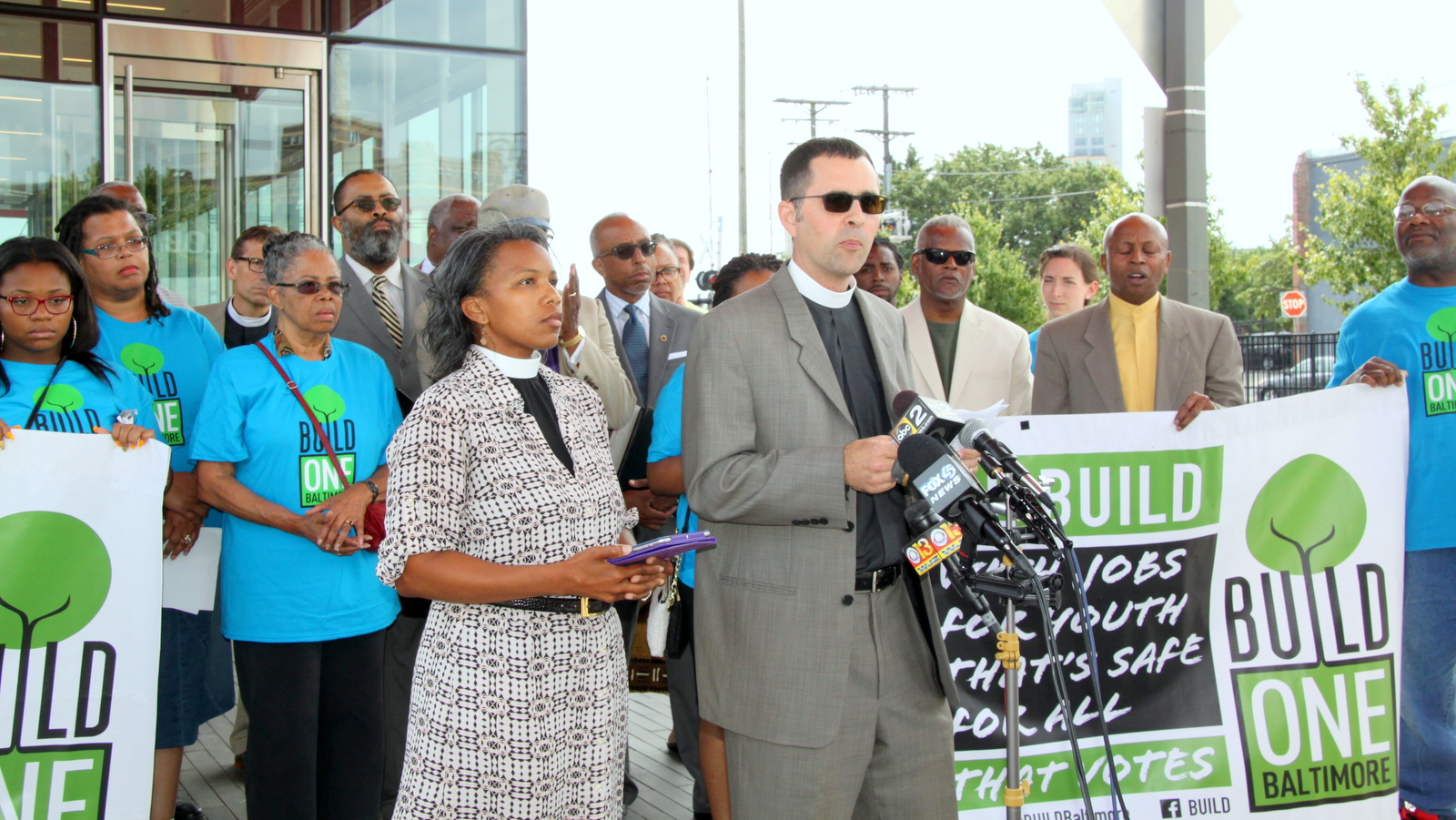 The nearly 40-year-old BUILD organization is the latest group to come forward with demands for the developer as Port Covington – a proposed mini-city on 266 acres along the Middle Branch of the Patapsco River – moves rapidly forward toward final City Council approval.

Amid broad support for the project from mainstream civic and city leaders, including Mayor Stephanie Rawlings-Blake, a number of groups have raised questions about the project’s impact on equity, housing segregation, jobs and city services.

The ACLU of Maryland, Maryland Working Families, Housing Our Neighbors, Maryland Consumer Rights Coalition, AFSCME, Unite Here Local 7, City Advocates in Solidarity with the Homeless, Assistant Professor Lawrence Brown, of Morgan State University and a number of other groups and activists have criticized the project as proposed.

BUILD leaders yesterday called on the city to slow down the approval process – and pause the negotiations that City Council President Bernard C. “Jack” Young has authorized for a Community Benefits Agreement – until an independent analysis of the 535-page TIF application can be completed.

“The city council has a responsibility to be just as diligent with taxpayers’ money as a bank is with their credit,” said Rev. Glenna Huber, BUILD co-chair. “Especially with a deal that will define the history of our city.”

Huber pointed out that the city is relying on the developer’s own data in sanctioning the project.

In March, the Baltimore Development Corp. recommended approval of the TIF on the advice of MuniCap, a Columbia-based financial services firm. The president of the company, Keenan Rice, acknowledged that he used facts and figures from a market study paid for by Sagamore.

Sagamore is also paying the costs of MuniCap’s analysis of the project for the BDC and the Board of Finance, which recently approved the $660 million TIF.

Huber called on city officials to halt the process until an independent, third-party financial analysis is conducted.

The group is demanding:

• Profit-sharing by Sagamore with the city if the TIF is approved.

• A 51% local hiring guarantee for the duration of the TIF.

• A promise that the city “leverage an equal amount of investment” in Baltimore neighborhoods as it does in Port Covington.

• A commitment that, for the 30-year duration of the TIF, Sagamore will reimburse the city for any lost public education funds, if they are reduced due to the state aid formula that links school aid with property values.

In a statement provided to the media after the BUILD news conference, Sagamore president Marc Weller said the company “strongly share[s] their desire to make sure that Port Covington benefits as many city residents as possible, which is why we have made unprecedented city-wide commitments and will shortly be announcing a partnership with our neighboring communities.” 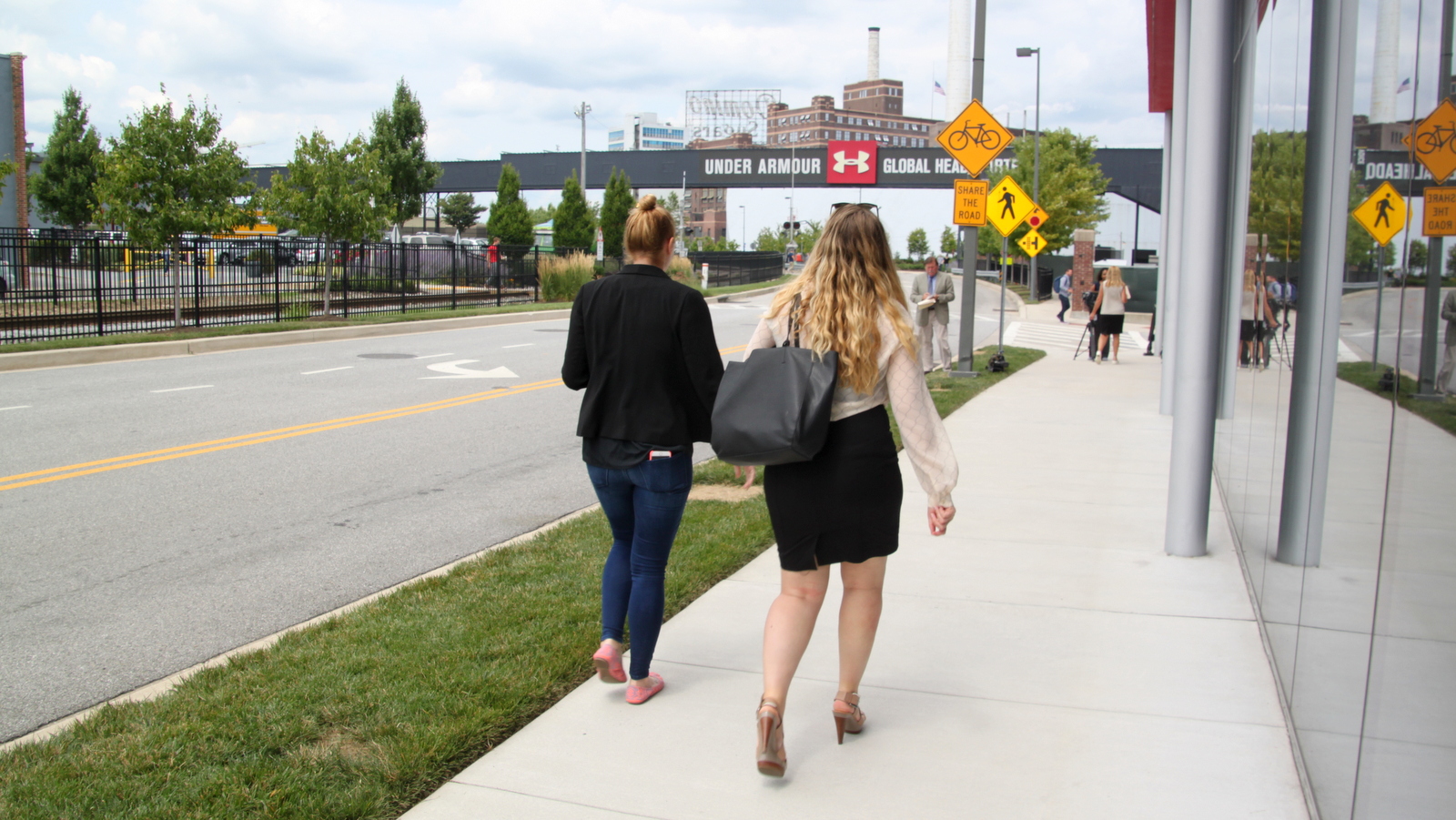 He said the developer plans to entering into a profit-sharing agreement with the city, but “the structure and terms cannot be determined until bond issuance.”

On local hiring, Weller said that “the formulaic provisions that BUILD seeks are entirely unrealistic and would make financing the redevelopment impossible.” He said Sagamore is “working with partners to build an unprecedented robust workforce-development program that will support not only the redevelopment for Port Covington, but other projects in the city and beyond.”

He also called the dollar-for-dollar investment unrealistic, calling it “a terrific idea,” but adding, “We are unsure what BUILD has in mind as the source of the funds.”

On school the funding formula issue, he said “We are absolutely committed to seeing that there is a permanent fix, and we have confidence that our legislators will make sure this happens.”