People assembled behind a Cherry Hill school on a roasting hot day for the signing of a community benefits agreement with the developers of Port Covington sketched out a cool vision of all the deal would bring.

They talked about new pools, parks and rec centers in their communities, a business incubator, new revenue for on-going programs like job training and after school enrichment, computers, laptops and more.

The long-term, multi-million-dollar benefits plan was described as “transformational” by Mayor Stephanie Rawlings-Blake and “exciting” by Cherry Hill’s Michael Middleton.

His comments came moments before he signed the document with Sagamore Development Co., along with representatives from Curtis Bay, Brooklyn, Lakeland, Westport and Mt. Winans, a group known as SB6. 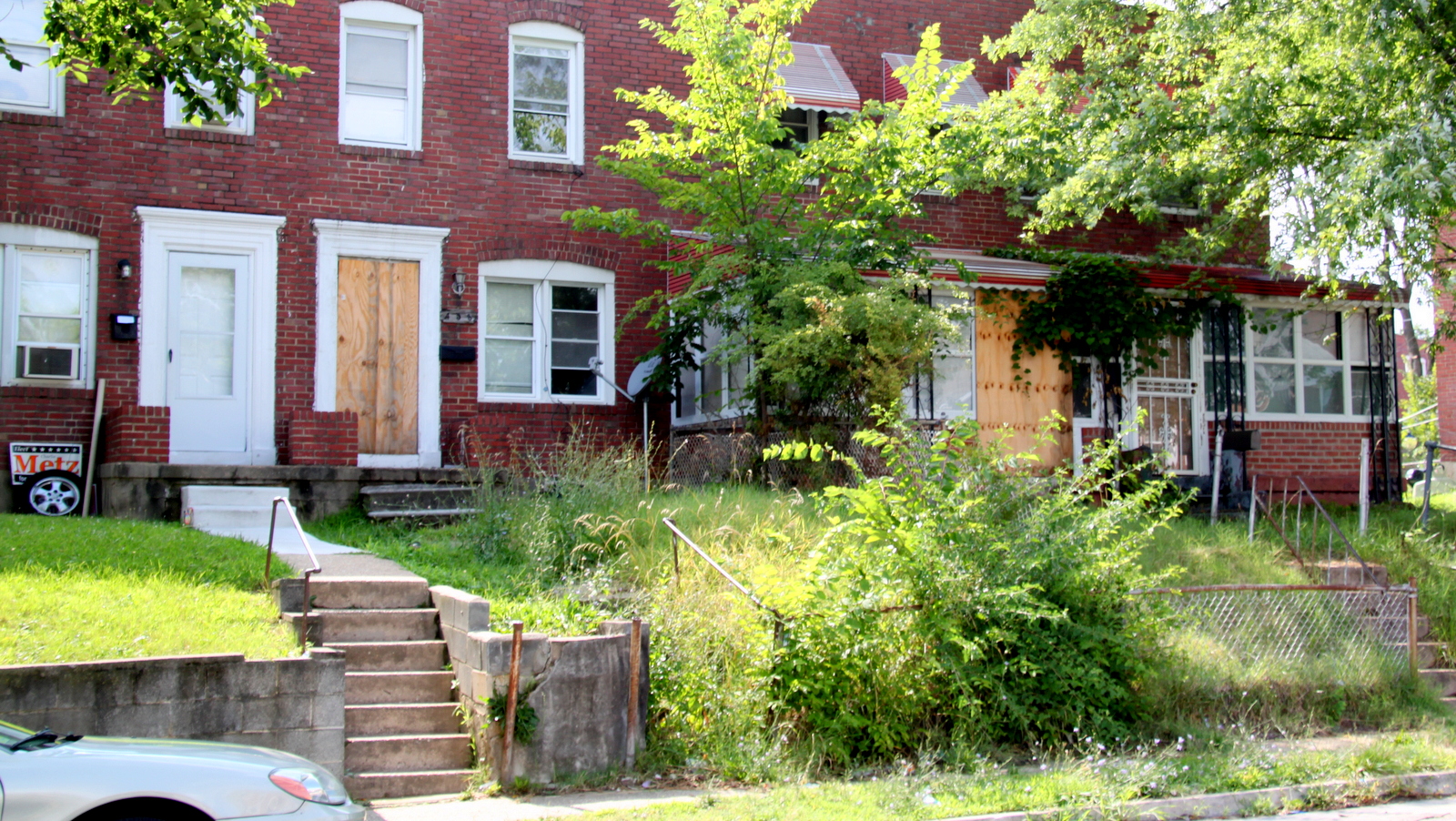 How do the parties propose to bring benefits to these communities, which are predominately black and have often felt neglected and isolated from the rest of Baltimore on the other side of the Middle Branch of the Patapsco River?

Tom Geddes, CEO of Plank Industries, said the agreement grew out of an “investment partnership” formed by the parties.

“Together the SB6 and Sagamore will be creating a long-term sustainable financing entity to fund the immediate ongoing and generational needs  of the communities in the SB6 area,” Geddes said. “This is not a one-time deal. This funding mechanism will be in place when I am almost 70 years old,” he said.

In return for supporting Sagamore’s application for $660 million in tax increment (TIF) funding from the city, the developer would provide a “baseline” $10 million to the communities over the next five years.

Only half that amount ($5 million) would be a direct payment from the company itself. The other $5 million would be raised from “outside organizations,” Geddes said.

The developer and SB6 would then “commit to working collaboratively through [a] new entity to achieve a joint goal of raising an additional $10,000,000 for the new entity over the course of the subsequent five years,” the agreement stated.

Asked afterwards who would provide these additional funds, Geddes had few specifics. “We feel very confident about the relationships we have not just nationally, but locally. That there’s a great deal of interest in Baltimore, and a lot of people are just looking for the right mechanisms and venues to do that,” he said.

Sagamore would also create a funding stream for the new entity through a number of fees on Port Covington office and commercial users, including a transfer fee every time a Sagamore-controlled property is sold. 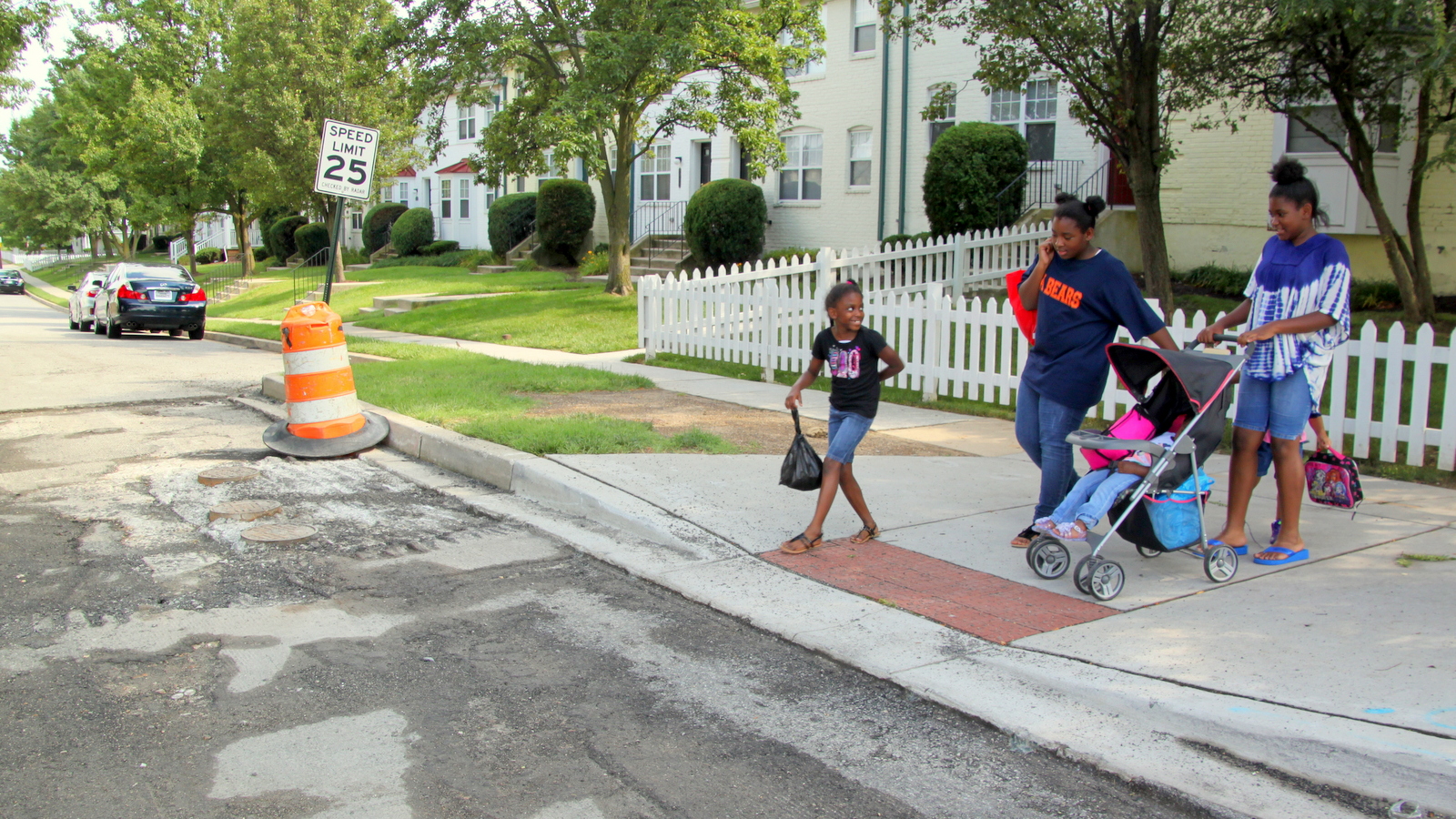 Streets in Cherry Hill right now are an obstacle course of gouges, potholes and construction cones due to sewage reconstruction. (Fern Shen)

Speakers today stressed that this funding stream would benefit not just the SB6 communities but the city as a whole.

About one-third of the fee-generated revenue would go towards city-wide projects focused on education, youth and workforce development.

Geddes noted that the pact comes after a previous memorandum of understanding signed with the city that had an additional $10 million pledge from Under Armour to help fund “citywide priorities.”

“This agreement provides the fuel to take these neighborhoods not only to the next level but to become everything that these folks have dreamed about and have known is possible if only they had the means,” he said.

Ferguson also made a point of condemning “armchair naysayers,” whom he described as “people who like to criticize big ideas.”

Speaking with reporters about the project afterwards, Rawlings-Blake chimed in on the same theme, saying, “We cannot let the naysayers win.”

The mayor was asked if she was singling out the American Civil Liberties Union and BUILD.

The two groups, as well as others, have called on the city to slow the approval process of more than $600 million in TIF financing bonds for Port Covington, raising concerns about the project’s exemption from the city’s inclusionary housing law and the need for an independent review of the financing package.

“I didn’t hear what they said about it,” said Rawlings-Blake, before she turned to leave the event.

Both supporters and critics of the project addressed the Planning Commission this afternoon as it took up three bills required to move the project forward.

The ACLU’s Barbara Samuels and others again asked the commission to withhold support for the project until financial and equity questions could be more thoroughly examined.

“The financial analysis is incomplete. The costs appear to be understated and the revenues appear to be overstated,” Samuels said.

The panel unanimously approved the measures. The Port Covington TIF package moves next to the City Council, where it will be the subject of a July 27 public hearing at City Hall.