When she first heard about the Port Covington project, longtime Baltimore fair housing lawyer Barbara Samuels confessed to an overflow audience last night at Red Emma’s, even she was excited. She recalled how she tweeted, “Oh wow, this could be transformative if done right!”

But after reading through the developer’s 500-plus page application for a $660 million financing package from the city, the American Civil Liberties Union of Maryland staff attorney said she was aghast.

“I was shocked to find no market study done . . . or sensitivity analysis,” Samuels said, pointing out the financial risk to the city if the thousands of projected new residents of the proposed new waterfront development “don’t materialize.”

“It’s the height of irresponsibility that Stephanie-Rawlings-Blake and Jack Young and, truthfully, Cathy Pugh – who we’ve heard nothing from – are not insisting on proper due diligence,” Samuels said.

Meanwhile, another speaker, Charly Carter, executive director of Maryland Working Families, repeated widespread concerns circulating around town that Council President Young may be “fast-tracking” the project through the City Council, which is holding a hearing today on the legislation required to move the project forward. 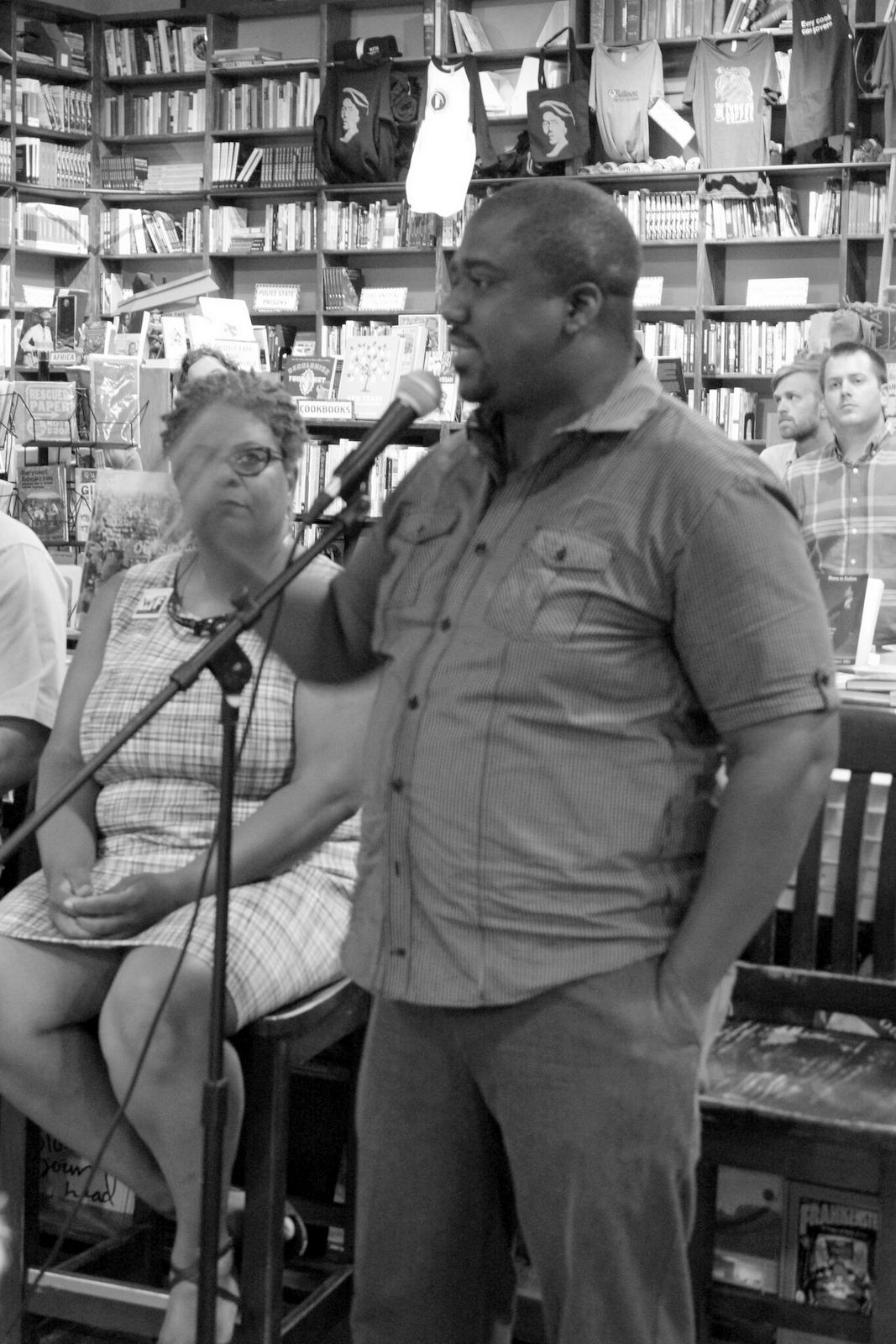 “Why would they steamroll this bill?” Carter said to a capacity crowd of nearly 200, some sitting on the floor, others jamming the vestibule. At Carter’s suggestion, audience members tweeted @prezjackyoung asking him to #slowtheroll.

Young’s aide Lester Davis said this morning no decision had been made about when to bring the three Port Covington bills to a vote.

Carter and Samuels, as well as Lawrence Brown, assistant professor at the School of Community Health at Morgan State University, and Scott Klinger, of Good Jobs First, raised a number of concerns about the financing.

Samuels noted that the project  the developers say they’ll roll out over 30 years is “front-loaded” to use city financing for non-residential improvements for years before the first apartment-dweller moves in.

“They want that first $64 million ASAP and the only use for that ‘tranche’ is parks – not streets, not sewers, not streetlights,” she said.

“Oh, and an archaeological pier. Does anyone here know what that is? I don’t.”

But the issue that prompted even more passion, from the speakers and in the crowd, was the effect of the new city-within-the-city on Baltimore’s already deep-rooted racial segregation and economic inequality.

Brown noted that Sagamore, Under Armour CEO Kevin Plank’s development company, has said it is marketing the project toward singles and empty nesters with incomes averaging around $100,000 –  a demographic they describe as “the creative class.”

Brown noted that urbanist Richard Florida himself, who popularized the concept, has concluded that the group is only about 8.5% African-American.

“How can future Freddie Grays live? They’re not going to be able to live in a Port Covington, a place with lead-free houses and quality schools,” he said. “We say Black Lives Matter. We also have to say Black Neighborhoods Matter.”

Samuels, noting the weak commitment to affordable housing in the developer’s plan, agreed.

“It’s painfully obvious that the trickle-down strategy has failed Baltimore. It doesn’t ever happen and all we do is build up more inequality between the ‘Two Baltimores,” Samuels said. “It’s unsustainable. Do we really think another uprising isn’t going to happen again?”

Drop it or Fix it?

One of the speakers who rose to address the audience said she thinks Port Covington should be scratched, not tweaked.

“I don’t care if Kevin Plank moves to Switzerland!” thew woman said, arguing that the financing for the project “should go to neighborhoods that need it.”

“What Port Covington has challenged us to do is look at how we could completely reorient our economic development policies,” she said. “It wouldn’t happen over night.”

With new thinking, Plank’s development campaign itself, she said, harking back to her initial remarks, could be beneficial.

“What if,” Samuels said, “Under Armour was putting in a factory or distribution center in West Baltimore?”