“Worse than the worst Board of Ed meeting,” tweeted one of the more than 600 people in Baltimore’s War Memorial Building last night for a nearly five-hour hearing on Port Covington that was dominated by the developer, the Baltimore Development Corporation, city officials and City Council members questioning them.

The committee never brought up any of the 130 people signed up to speak, outside of a couple of panels at the end with representatives from established groups already criticizing the massive waterfront development seeking $660 million in city financing,

Instead, the crowd’s signs and attire had to speak for them: there were the teal-blue shirted members of the faith and community group BUILD and polo shirts emblazoned with union logos.

There were the yellow tee-shirted supporters of Port Covington brought by Sagamore Development, Under Armour CEO Kevin Plank’s development arm. And there were the red shirted men from Wolf Professional  Security, who gave the Sagamore contingent priority, ushering them in first, to prime seats up front.

“You’ve used up all of your panel’s time,” Councilman Carl Stokes informed BUILD’s Rev. Glenna Huber, after she delivered a fiery speech that brought the audience to its feet. 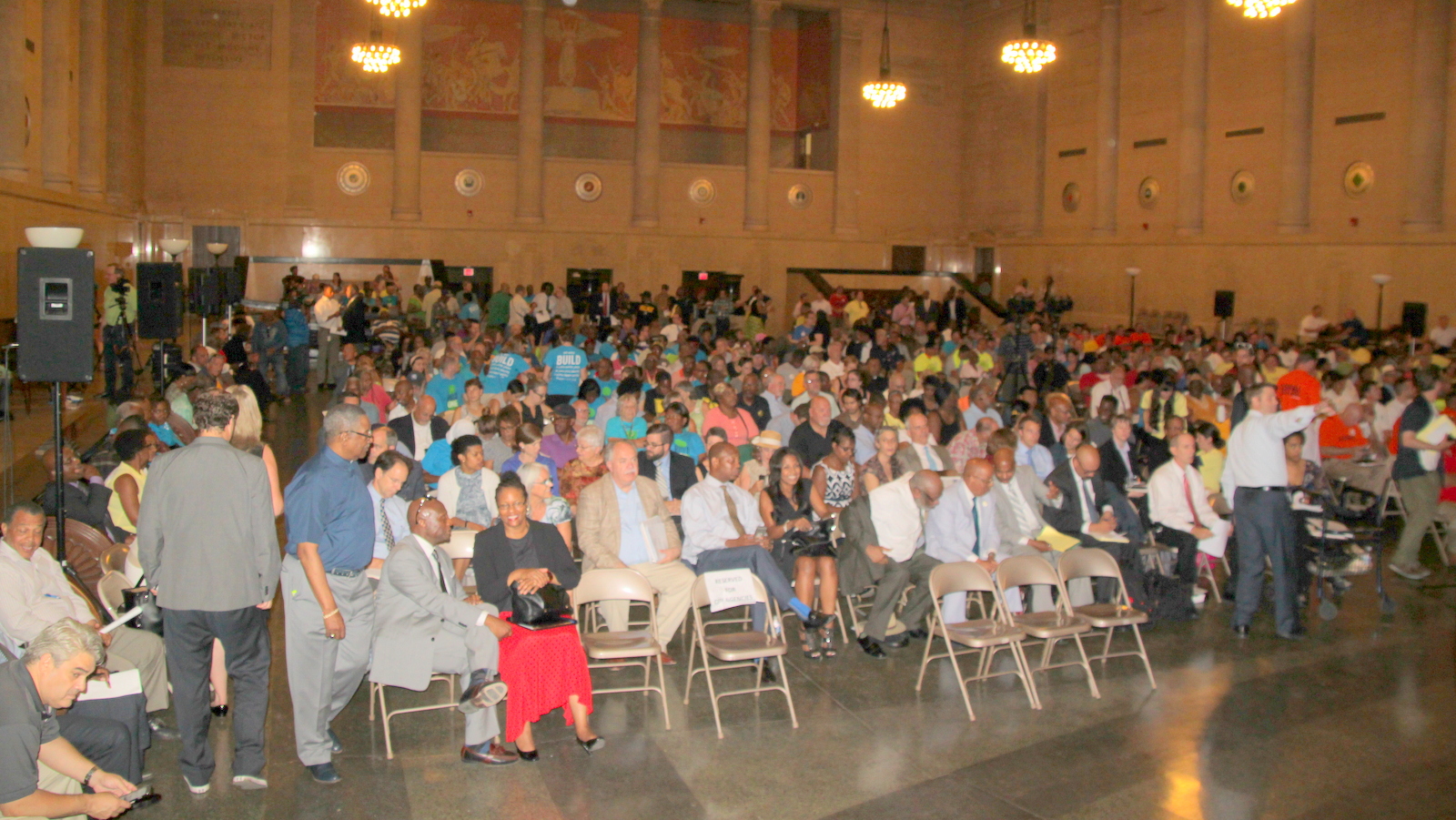 The War Memorial Building is filled to capacity at the start of public hearing on Port Covington. (Fern Shen) 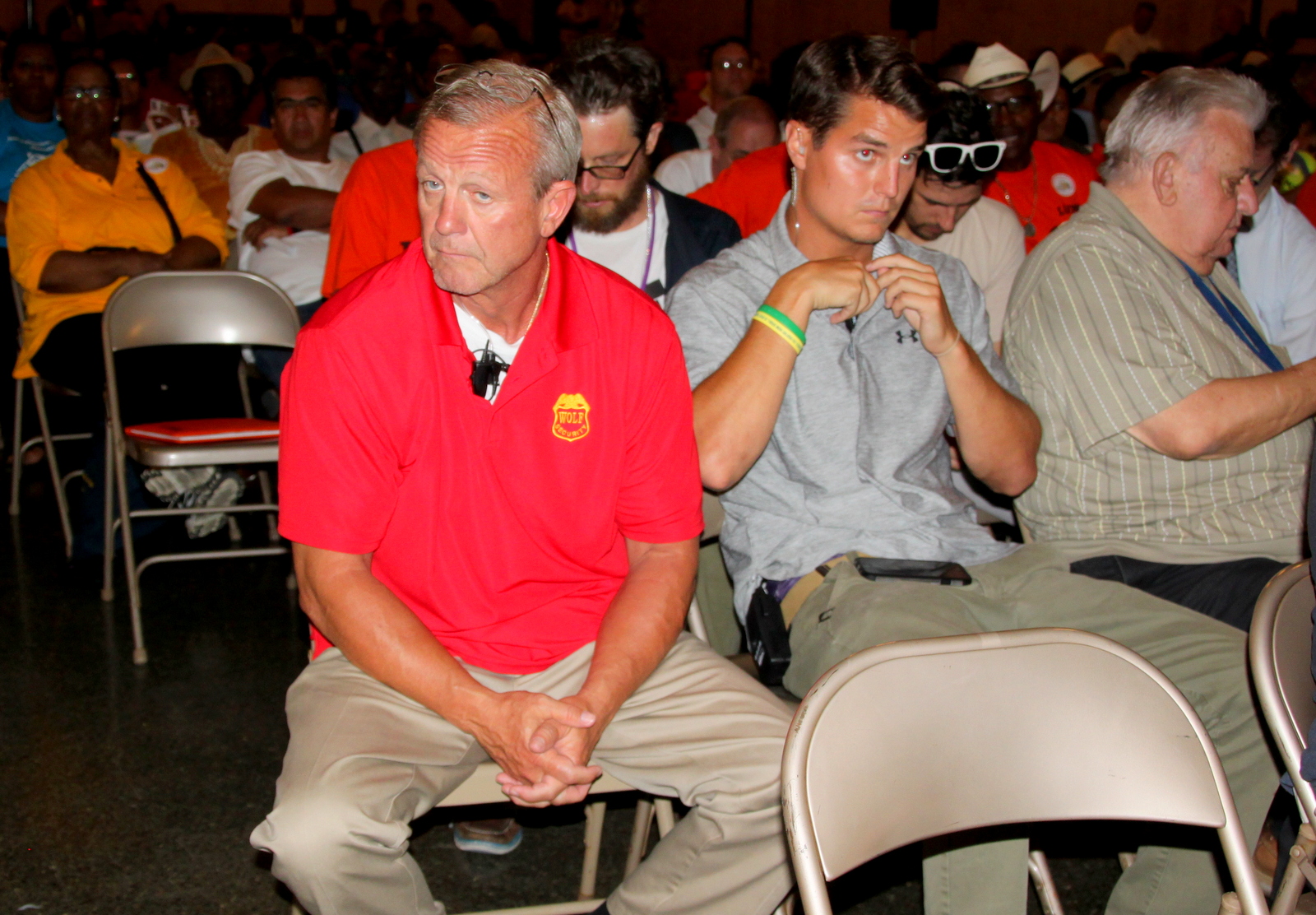 “It’s impossible to trust, when you’ve been played so many times,” Huber said, assailing the councilmembers for their past financing support waterfront developments she said yielded little benefit to “uptown.”

“We know that many of you love developers, most recently at Harbor Point,” Huber said. “Will today be different? Are you willing to stand up?”

By the end of this meeting of the Council’s  Taxation, Finance and Economic Development Committee just before 10 p.m., there was some clarity on the process.

Stokes dispelled widespread concern over the past few weeks that Council President Bernard C. “Jack” Young intends to bring the bill to a vote within days. Stokes said there will be no vote over the next three weeks and said the Council will take as long as needed “to get the best possible deal.”

He also said last night’s hearing was “in recess” and would be continued on August 3, presumably to allow speaking time for those who didn’t get a chance to testify. 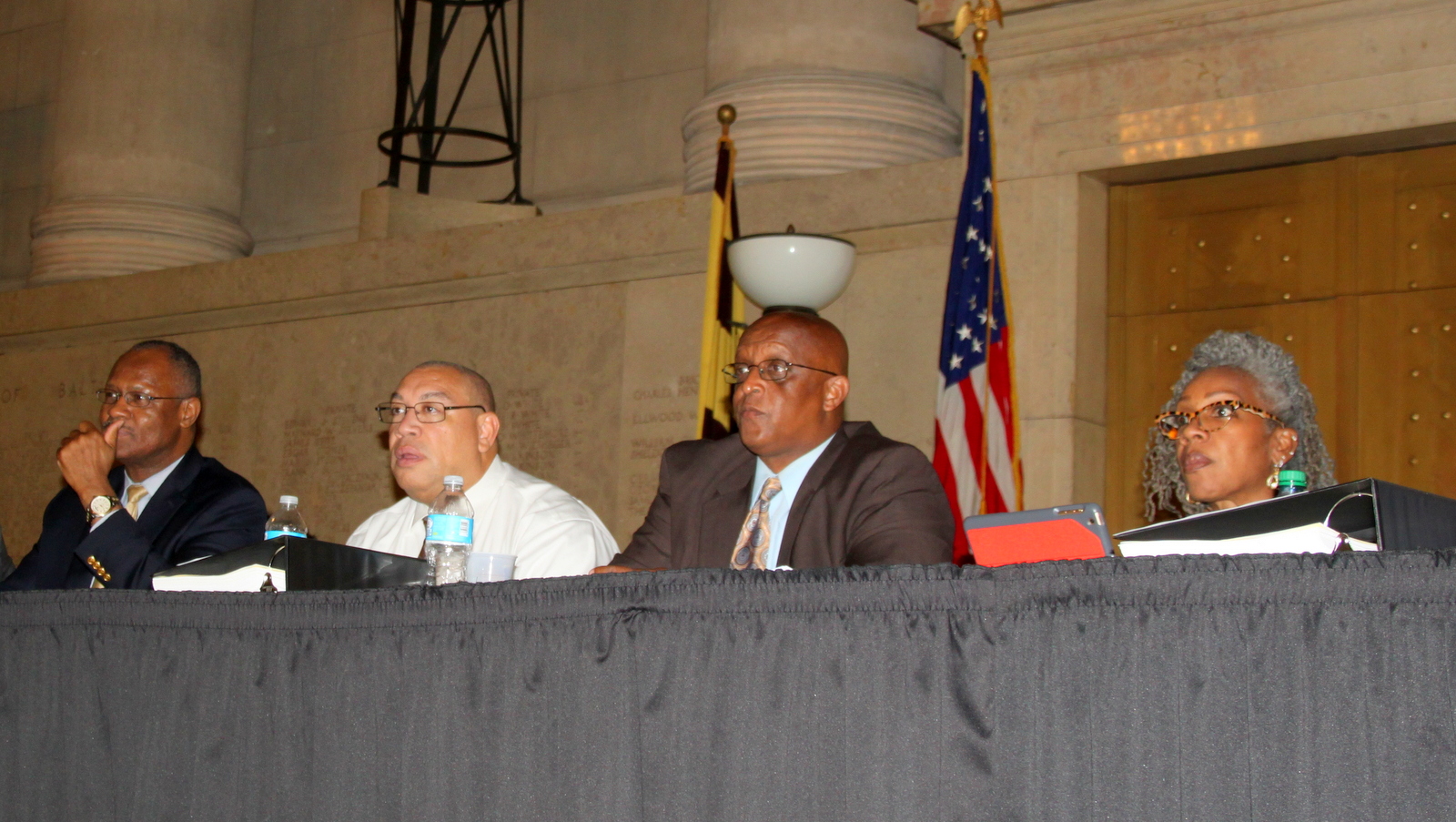 Some exchanges with the developer also advanced the intense city-wide Port Covington debate, as Sagamore seeks public financing and subsidies of unprecedented proportions for the 260-acre mixed use-development.

City Councilman Bill Henry pressed the developer on why none of its TIF request was for affordable housing and suggested funds could be found by taking some of those “really gorgeous parks” out of its request.

“We were focused on infrastructure – it was a technical sort of, like, choice,” said Sagamore’s attorney Jon Laria, noting also that using TIF proceeds for affordable housing “is a fairly expensive proposition.”

Councilwoman Mary Pat Clarke pressed Sagamore about whether the MOU’s the city has reached with them are binding over the decades-long life of the project.

“A developer can’t walk away . .. . and expect not to suffer all kinds of intended and unintended consequences,” Laria told her, leaving Clarke not entirely convinced.

At a recent Board of Estimates meeting, Clarke told him, City Solicitor George Nilson “did confirm to me that these MOU’s were non-binding.”

“And if they are binding with Sagamore, they are awfully vague,” she added. Councilwoman Helen Holton added her concern about whether the MOU’s would endure. 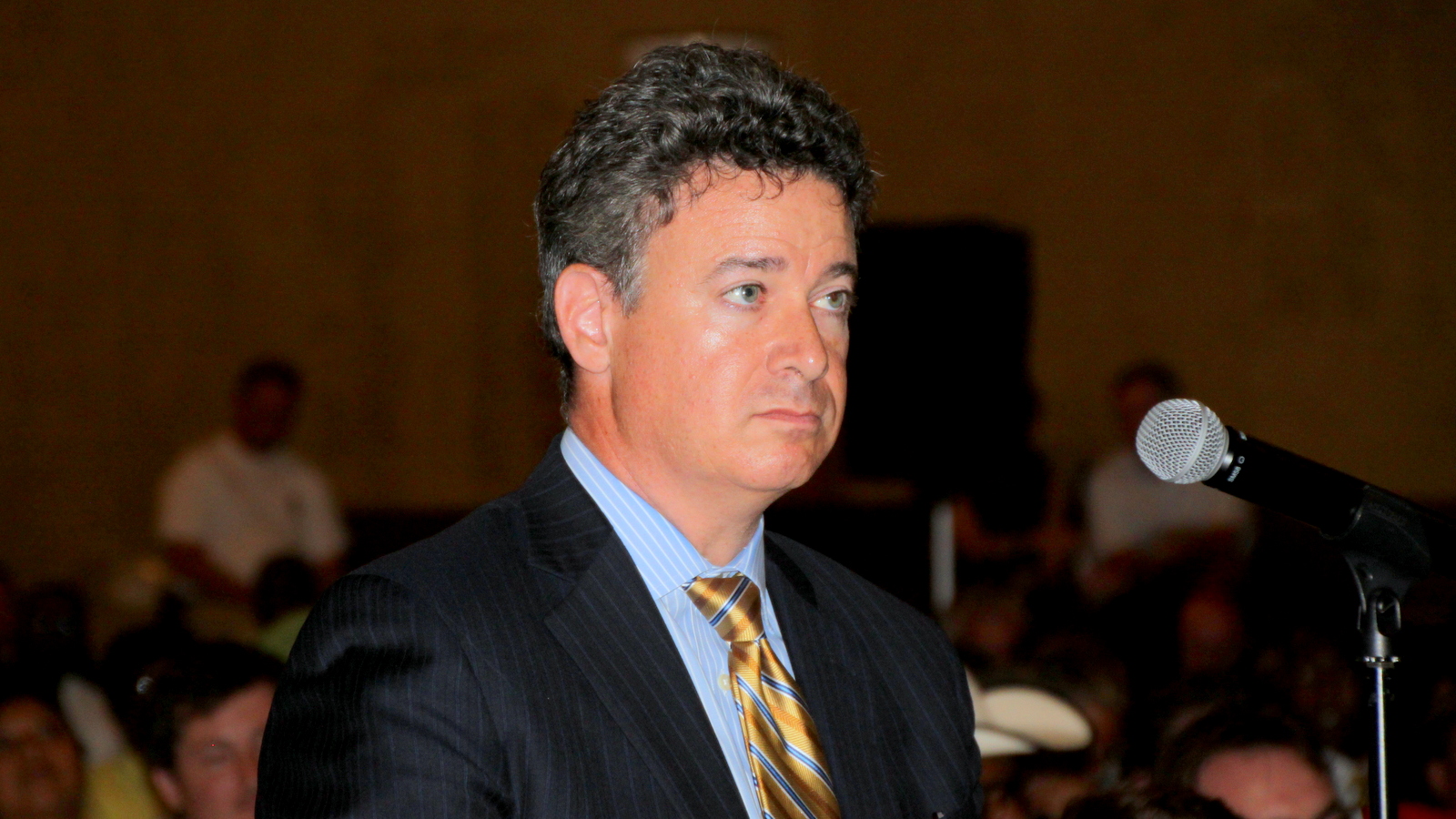 “We’re in an administration that will be gone. What makes these agreements stand?”Holton asked, noting that the local hiring MOU only has funding from the Mayor’s Office of Employment Development for five years.

“Five years is the tip of the iceberg of what we are going to do,” she said.

Laria promised to “provide assurances” after the meeting but also protested “You can’t enter into an agreement forever.”

The audience applauded when Holton responded “Well, we have a financial commitment with these bonds for 41 years!”