Some of the people speaking out at a hearing last night used demographic and legalistic arguments to critique the half-billion financing subsidy Baltimore is being asked to give the Port Covington waterfront development project.

“This is not only unconscionable, but it likely violates the law,” Henderson said, speaking before about 300 people who turned out at the War Memorial Building for a continuation of the City Council hearing on TIF Tax Increment Financing for the massive 260-acre South Baltimore redevelopment.

Three groups representing Henderson’s group came with her and went on to make her case: the American Civil Liberties Union of Maryland, the Public Justice Center and the NAACP Legal Defense and Education Fund.

Others accompanying Henderson, meanwhile, spoke in personal terms, pleading with city council members to reconsider their support for a course of action they say will worsen how they feel as some parts of Baltimore develop: stuck in the undesirable “other” parts and left out.

“I am a woman, a single mother, and I would just like to see, as Port Covington is built, that we are allowed and can be afforded some dignity,” said  Roxanne German, who lives at Perkins Homes.

“I think of our neighborhood, which is full of crime. I think that I’d just like to see a change in my lifetime. I’ve lived my life in poor conditions,” said German, a Communities United member. “I hope that when they build Port Covington they allow some low income people to live there, please.”

Lack of affordable housing guarantees – and the specter of deepening Baltimore’s class and race divide – were just two of the issues raised at last night’s hours-long meeting of the Council’s Taxation, Finance and Economic Development Committee.

City Council President Bernard C. “Jack” Young, along with other council members, spent most of the evening listening, but called at one point on Sagamore to make deals with the groups asking for more benefits in return for the TIF.

Among them was a contingent representing organized labor groups who say the developer’s promise to pay prevailing wages on about 25% of the infrastructure work at Port Covington is not enough.

“We’re not opposed to Port Covington. We’re opposed to not doing better for Baltimore,” said John Ripley, president of the Baltimore County Federation of Public Employees.

Councilman Carl Stokes asked Ripley about the contention by some groups representing minority contractors, who sometimes hire non-union workers, that the agreements would hurt minorities and women.

“I totally disagree,” Ripley said. “It’s simply unacceptable to have more of the proceeds not staying in Baltimore, not staying in Maryland and not helping the community where this project’s being built.” 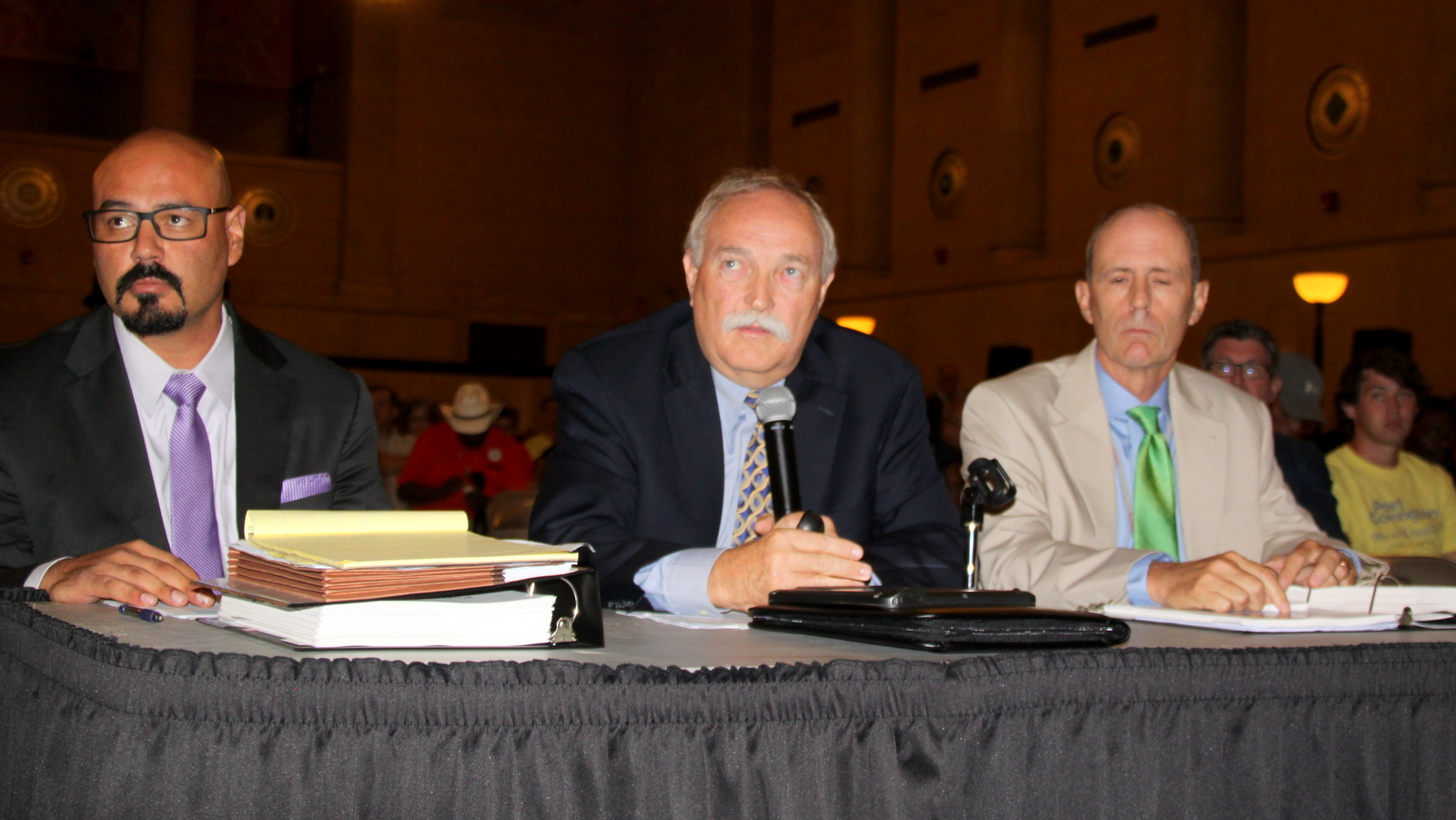 Representatives of Sagamore were there as well, along with community supporters in matching tee shirts, including the members of SB6, an alliance of six communities who have negotiated a benefit agreement with the developer.

“I can look at my newborn son and feel confident that…we’re helping to make the city better, make his future better,” said Aaron Jones, of Treason Toting, whose travel bag and accessory company is located at Sagamore’s City Garage building.

Also present was Keenan Rice, the Columbia-based consultant whose positive conclusions about Sagamore’s TIF proposal have come under a barrage of criticism.

Rice, president of MuniCap, Inc., fired back at the harsh assessment by another expert, TischlerBise Inc. that found Rice’s analysis too rosy and superficial.

“Our fiscal impact calculations are conservative – with particular care and conservatism paid to the most significant costs and revenues,” Rice said, during a lengthy presentation and Power Point.

City Councilman Eric T. Costello spoke up several times during the presentation to critique the critics of the project, including Betty Robinson, who noted that the initial TIF financing for Port Covington supports parks at three times the level of the current city Recreation and Parks Department budget.

Robinson, of the group Showing Up for Racial Justice, called that unacceptable “especially as we are closing recreation centers.”

“Maam, with all due respect you do realize we are not closing rec centers in Baltimore city, don’t you?” Costello said, to which Robinson replied “Well there have been rec centers closed.”

The audience cheered as she walked through the list that have closed in recent years, including one in Harlem Park two yearsago. Costello continued saying “it’s just factually inaccurate to say the city is closing rec centers.”

Councilman Bill Henry stepped in with some additional context.

“When you’re talking about Baltimore closing  rec centers, that is a pattern over the last generation,” he said, bringing the crowd to its feet.