Calling on the Port Covington developer to show “the same kind of creativity on affordable housing plans” as it has demonstrated on green space, kayak landings and boat slips, critics last night suggested shifting some of the public financing for such amenities toward affordable units at the massive waterfront project.

“The city really should not be in the business of subsidizing affluent enclaves, especially one year after the unrest,” said the Rev. Andrew Foster Connors, clergy co-chair of the group BUILD.

“Sagamore can do better,” Foster Connors said, of the affordable housing component of the TIF proposal, at present a 10% goal. “Some of the weakest language” in the deal, he said.

His remarks prompted an indignant response from Jon Laria, the attorney for Sagamore Development, Under Armour CEO Kevin Plank’s company.

The men faced off as more than 100 people packed into a several rooms in City Hall watched or listened to the latest City Council work session on the project’s unprecedented $660 million public financing request.

“This sort of, you know, snarkiness is not helpful to the discussion,” Laria said, setting off a furor in the room. 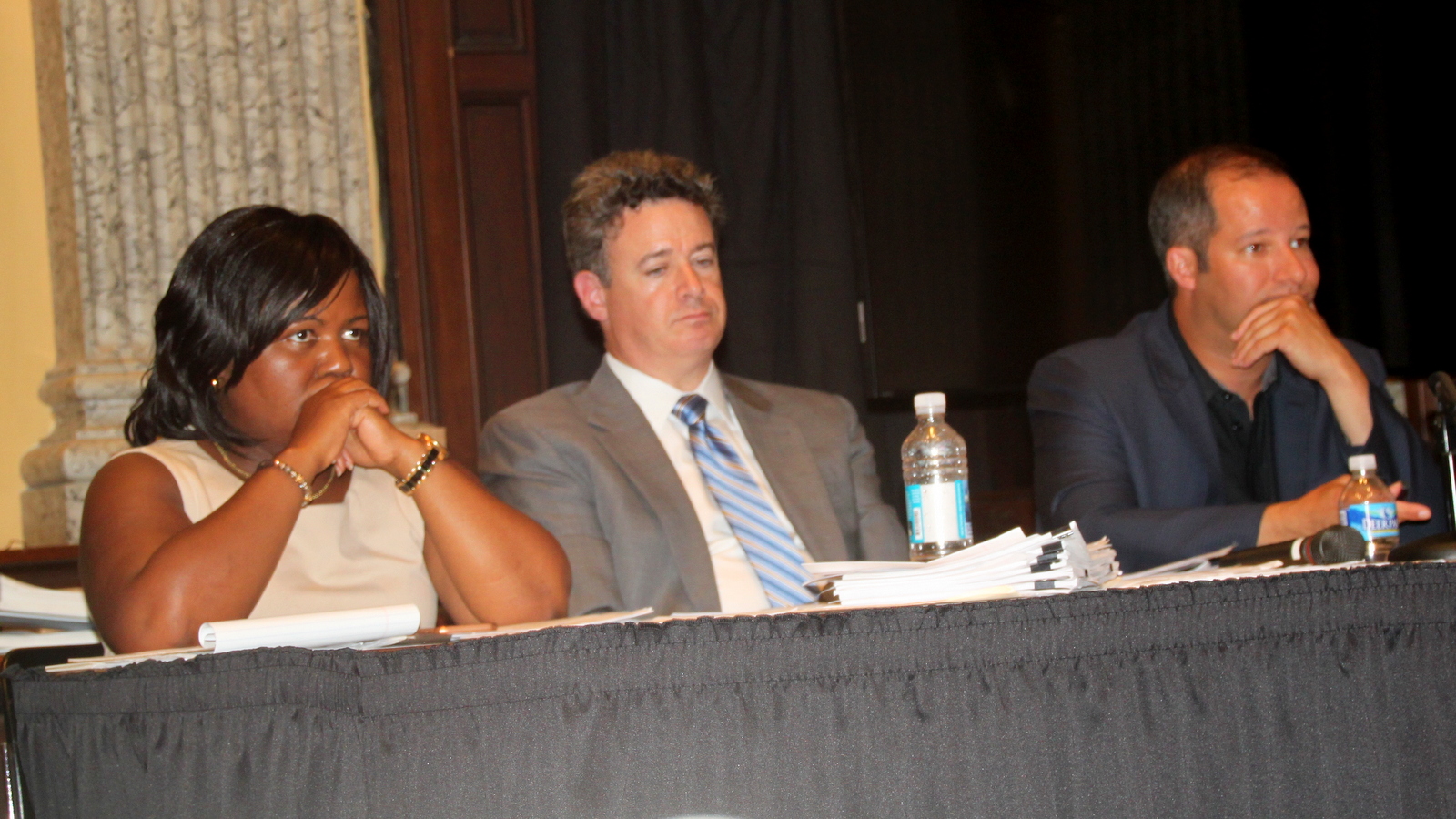 “That’s arrogant,” one man said as another booed.

“You don’t have to negotiate with them!” yelled a woman wearing a tee shirt emblazoned with “SB6,” the coalition of South Baltimore communities that has already negotiated a deal with the developer.

“I don’t feel I’m being snarky if I call out a developer who refuses to come out from behind attorneys and a PR campaign,” said Foster Connors of BUILD (Baltimoreans United in Leadership Development).

“You opened the door to this,” Councilman Carl Stokes, chairman of the Taxation, Finance and Economic Development Committee, told the attorney. Stokes warned the crowd he would have anyone who interrupts ejected.

“Pay for it Yourself!”

Laria then resumed, honing in on the subject of kayak facilities he said would be “world class” and available to all.

“I’m fairly sure that African-Americans kayak too,” Laria said.

At that, Rev. Cortly “CD” Witherspoon, of the city chapter of the Southern Christian Leadership Conference, leaped to his feet from the audience, saying working-class people in the city would never benefit from these amenities.

“This is for rich white people! You want it, you pay for it yourself!” Witherspoon shouted.

Before leaving the chamber, he aimed his final remarks at Stokes. “You’re going to let this man come in this community and disrespect the taxpayers?”

Witherspoon added, “This is your legacy, Carl.”

“Black Kids Kicked the Hell Out”

It was one of the more raw confrontations yet in the run-up to council action on three bills required for the project to move forward.

One byproduct of the conflict was some of the most biting comments on the project to date from Stokes, its most vocal council critic.

After assuring that Witherspoon was escorted from City Hall, Stokes went on to, essentially, agree with him, albeit in “more measured tones,” as he put it.

Roughly $140 million — about 27% of the Tax Increment Financing that Sagamore is asking from the city  — will be used for parks, green space and amenities such as an “archaeological pier” rather than typical infrastructure like streets and sewers.

In the company’s TIF application, the first series of bonds scheduled to release in June of 2017 will cover $49 million of public improvement costs for three new public open space areas in Port Covington.

“I couldn’t disagree with you more,” Stokes said to Laria. “They’re asking for $140 million to do campus enhancements.”

He was referring to the fact that the Port Covington TIF area surrounds, but does not include, the new Under Armour corporate campus. 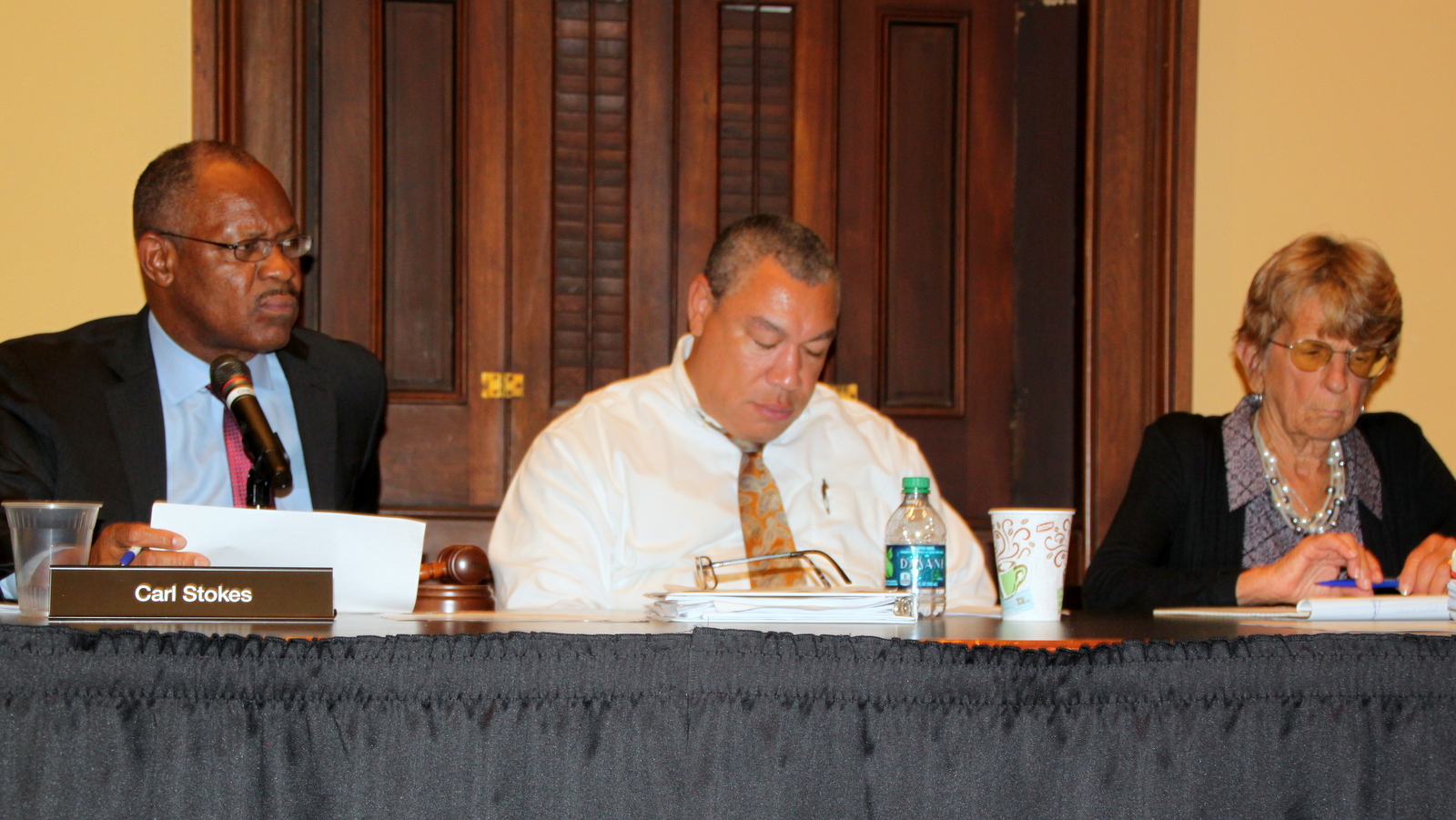 Noting that most of the $107 million Harbor Point TIF financing granted in 2013 was for green space at the high-end waterfront development, Stokes said city residents got little in return.

“We just gave a guy $60 million bucks to do public parks on a peninsula at Harbor Point and I am telling you the folk and the kids uptown will never – will never – set foot on that property,” he said.

The $140 million Sagamore is seeking to finance parks, Stokes observed, “is three times the budget annually of the Baltimore city Department of Recreation and Parks.” 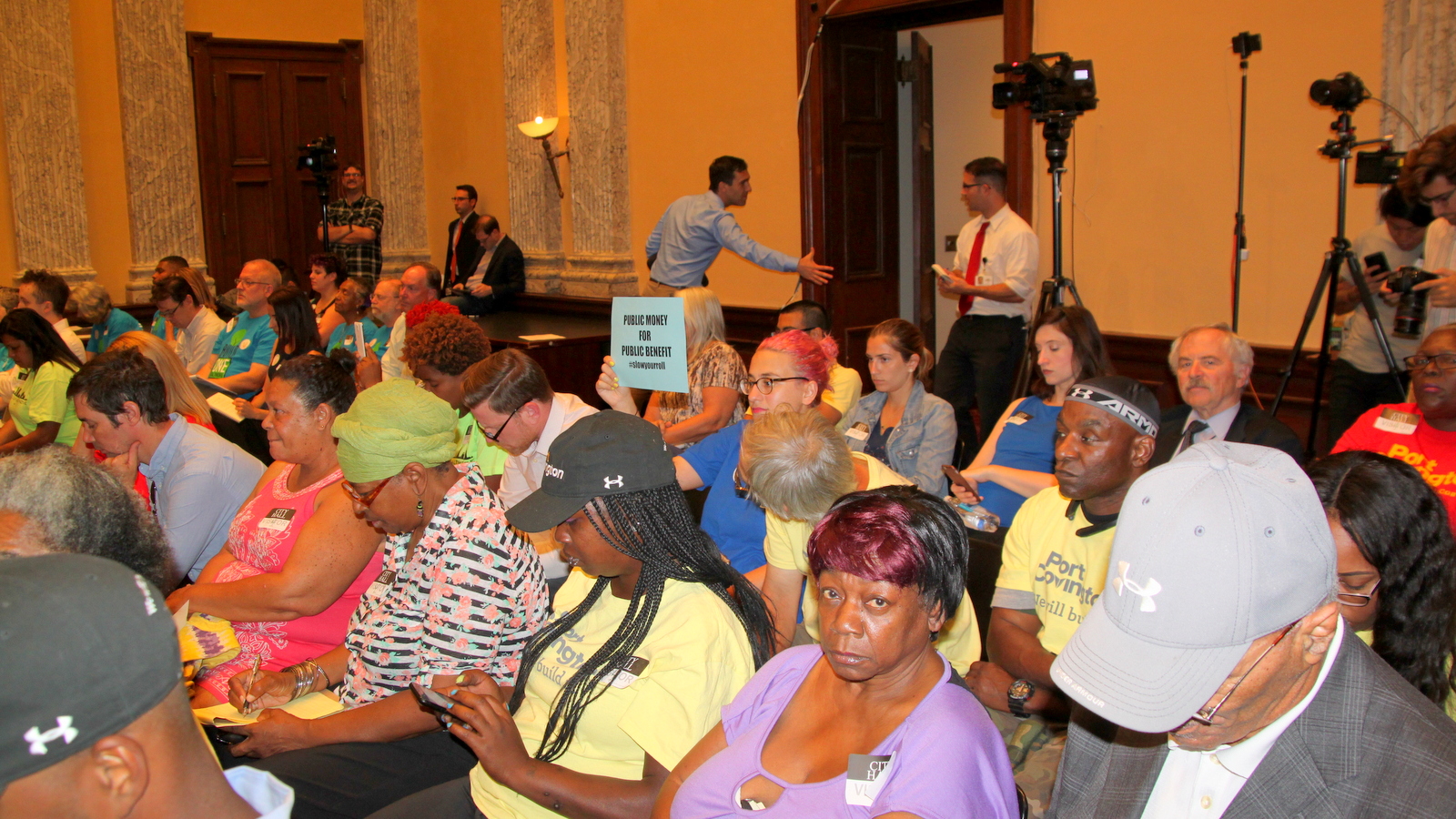 The audience at a City Council work session on Port Covington. (Fern Shen)

Laria responded by saying that, “without world-class parks, the project will not succeed.” And he challenged the assertion that people from other parts of the city would not use the 40 acres of green space planned at Port Covington: “That is a low expectation that we should collectively seek to exceed.”

“They are kicked the hell out of Harbor Point.”

Councilwoman Mary Pat Clarke, for her part, scolded the developer for not talking with the housing advocates, faith and community groups such as BUILD, organized labor and other stakeholders who have formed coalitions and proposed amendments to the Port Covington bills.

“This is unacceptable behavior,” Clarke said. “Get it done or the bill will not get done.”

“We’re running out of time,” she said. “We could just put it [the Port Covington legislation] back in committee for a nap. I’m not being facetious about that.”

(She acknowledged that she had not counted votes on the bills to enable the project, which has heavy backing from Mayor Stephanie Rawlings-Blake.)

Laria said the two sides had held meetings. Foster Connors responded, saying Sagamore met with them but, “just listen[ed] to say they listened and then show[ed] up at the hearing the next week with the same proposals with no movement and no negotiation.”

Labor unions say Sagamore’s agreement to pay prevailing wages on a quarter of the infrastructure work at the site is not enough.

Housing and social justice advocates want affordable housing to be a mandate, not a goal. Stokes has introduced a bill that would require 20% of the housing at Port Covington be set aside for low income residents.

An attorney from the Public Justice Center was on hand last night to review the advocates’ proposal, which calls for a 25% affordable housing requirement: 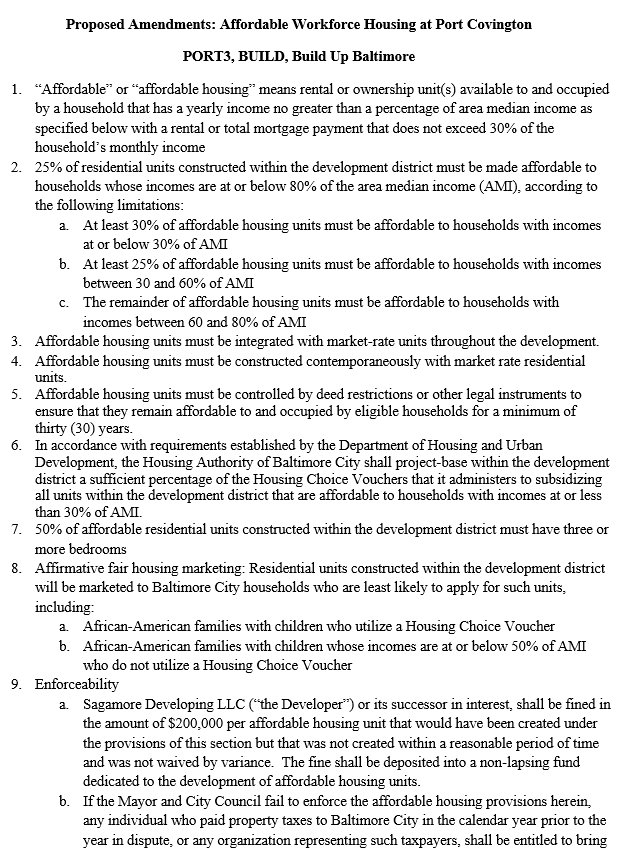 Councilman Bill Henry has drafted city-wide legislation that would require all city subsidized projects to include 10% affordable housing.

As he has before, Laria responded to critics of the Memorandum of Understanding the company signed with the city on affordable housing saying Sagamore considers it legally binding.

“It’s as serious a commitment as can be made. I really would like the commitment to be higher. But affordable housing units can’t be built for free,” he said.

As the audience watched, Stokes scheduled a negotiation session between the two sides that is to take place today at 10:30 a.m. in City Hall.

He decreed which parties could be at the closed-door meeting — PORT3, BUILD and Build Up Baltimore — and said SB6 could not. “You’ve had your negotiation,” he told the group.

He also said there will be another work session on the bill on Monday, at a place and time to be determined.