Under the city’s Inclusionary Housing law, Graziano says, the city would have to pay Plank’s development company millions to compensate it for the cost of providing affordable units.

“The calculations that we’ve made have determined in this case that over $180 million in public subsidies would have to be provided to the developer,” Graziano said last week at a City Council work session.

Those calculations, it turns out, were based on material prepared by the former Housing Department employee who administered the Inclusionary Housing law.

Michael Pokorny was hired last year as a project manager at Plank’s real estate company, Sagamore Development, and was assigned to work on the company’s request to be exempted from the Inclusionary Housing law.

“Thank you for submitting development and financing information to Baltimore Housing for the following project: Port Covington,” Graziano wrote in a March 24, 2016 letter addressed to Pokorny at his current workplace, 1000 Key Highway East, home of Sagamore Development.

“Based on the material you presented,” the letter to Pokorny stated, Graziano had determined “that Inclusionary Housing requirements for this project exceed the allowed threshold amounts.” 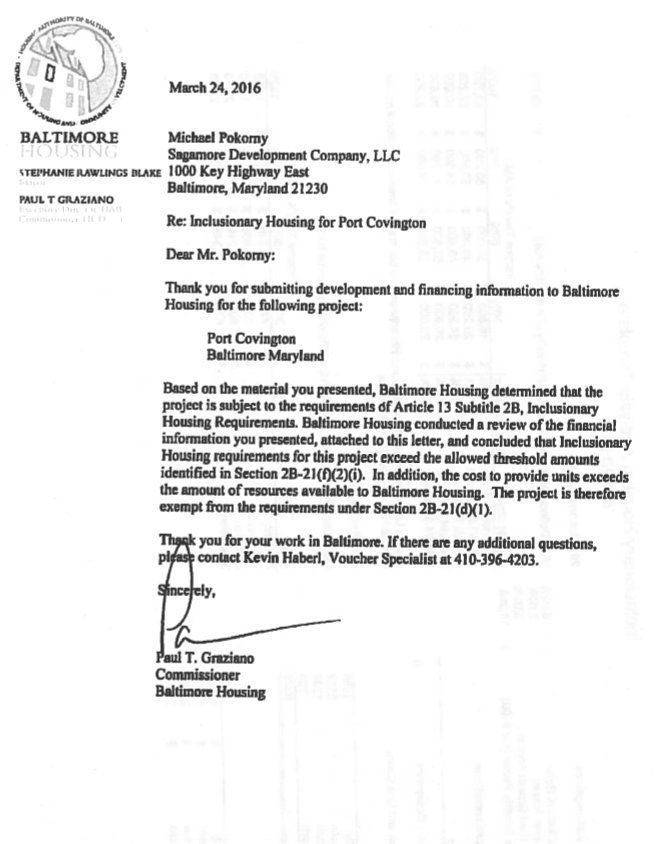 What this means, in effect, was that the person once charged with ensuring publicly subsidized projects live up to Baltimore’s affordable housing requirement was hired away to help a developer seeking an unprecedented $660 million subsidy escape that requirement.

Jeff Singer, of Housing Our Neighbors, said the former official’s movement from a public to private role for such a targeted task reflects the too-tight relationship between City Hall and the developer.

“This is yet another example of the manner in which the revolving door between government and corporations perpetuates the public policies benefitting those with privilege and power,” said Singer, former CEO of Healthcare for the Homeless.

Singer and other critics note that the law gives the commissioner discretion to determine whether the subsidy is sufficient to offset the impact of complying with the law.

Barbara Samuels, managing attorney for Fair Housing at the American Civil Liberties Union of Maryland, argues in her 20-page analysis of the deal that Graziano should have ruled the other way.

“Nothing more is required to make the developer whole,” she said, noting that the project seeks not just a half-billion dollars in TIF financing, but also lucrative re-zoning and more than $700 million of additional state and federal grants.

City Councilman Carl Stokes who, like Singer has criticized the Plank project for failing to guarantee more housing for poor and middle-class people, said over the weekend he was unaware of Pokorny’s involvement.

“I don’t know the guy,” he said. “This is the first I’m realizing this is the situation.”

Messages left for Pokorny and Sagamore were returned by publicist John Maroon, who told The Brew in an email, “We won’t be offering a comment.”

The hiring appears to be a violation of the “Post-Employment Restrictions” (Section 6-22) of the city’s Ethics Code that “applies to former public servants generally.”

The first listing in the city government portion of Pokorny’s on-line LinkedIn resume reads as follows:

In addition to preparing the material that resulted in Graziano’s affordable housing finding, Pokorny has appeared at public meetings along with other Sagamore officials where he was introduced as a member of the project team.

Before going to work for Baltimore Housing in March 2009, Pokorny worked for the Baltimore Development Corporation (BDC) where he negotiated the ill-fated Gateway South contract that cost the city $1.2 million.

Acting City Solicitor David Ralph has not returned The Brew’s request for comment. A spokeswoman for Graziano and Baltimore Housing said she is preparing a response.

The criticism comes as Sagamore, under pressure from the City Council, has been negotiating with housing advocates, labor unions and faith and community leaders over not only affordable housing but a host of other issues, including profit-sharing, workforce training, local hiring, prevailing wages and more.

It’s a high-stakes dialogue, with the developer laying out a decades-long proposal to transform 260 acres on the South Baltimore waterfront into a mixed-use mini-city composed of restaurants, hotels, shops and 7,500 to 14,000 new apartment units.

Stokes, who said he acted as “facilitator” for two of the three closed-door negotiations sessions so far, said they “went fairly well.”

The Inclusionary Housing law requires that 20% of the units in city-subsidized project be set aside for low income renters.

However, the Memorandum of Understanding that the city negotiated with Sagamore after Graziano’s ruling specifies a “goal” of having 10% of the Port Covington units be affordable.

Community leaders and housing advocates criticize the MOU as non-binding and weak.

Stokes has said there should be a legal requirement that 20% of the units be available for low-income residents, while advocates are calling for 25%. Without these changes, they argue, the project will deepen divisions in a city already deeply segregated by race and income.

Sagamore says it considers the MOU binding and wants to respond to concerns about affordable housing and other issues, but cannot financially afford to do so.

Singer calls the decision “a canard.”

“There is no statutory justification for this statement. It is baffling that the Commissioner makes this claim in every public forum,” Singer wrote in an email to officials and other stakeholders.

He argued that Graziano could have analyzed the proposal differently in order to ensure some more affordable options at port Covington.

“Surely the developer could design residences such that the taxpayers’ $660 million subsidy would be sufficient not to disadvantage the developer,” Singer wrote.

“Alternatively, some TIF [Tax Increment Financing] dollars currently targeted to parks and other amenities could be redirected to the more urgent need of housing for impoverished Baltimoreans.”

“I keep saying there are plenty of developers in this town who make a good living off affordable housing – Enterprise, Seawall, the Woda Group,” Stokes said. “No one’s forcing Sagamore to do it.”

Asked if the city is hamstrung under the poorly enforced and widely criticized Inclusionary Housing law, Stokes said, “no.”

“Some of what Mr. Graziano has said has been misinterpreted,” the 12th District Councilman said. “He knows better.”