From a smooth and celebratory press announcement in the afternoon to chaos and harsh words in the evening, public events for the Port Covington project veered strangely off script yesterday.

City leaders and the faith and community group BUILD had been all smiles at 1 p.m. in the City Garage at Port Covington, describing an agreement the parties had reached with Sagamore Development Co. that speakers said would provide over $100 million in community benefits and be “transformational.”

At a 6 p.m. City Council committee meeting, members were set to vote on three bills paving the way for the massive waterfront project to get $660 million in TIF Tax Increment Financing.

But after the committee approved two of the three bills in the Port Covington package, Stokes suddenly called a recess before the panel could take up the third piece of legislation, the bond bill itself.

“I dislike being put in this position,” said Stokes before storming off. “It is unfair, unethical and immoral to act in this way for a public body.”

Committee members, who voted down the recess to no avail, declined to say why Stokes had called it. 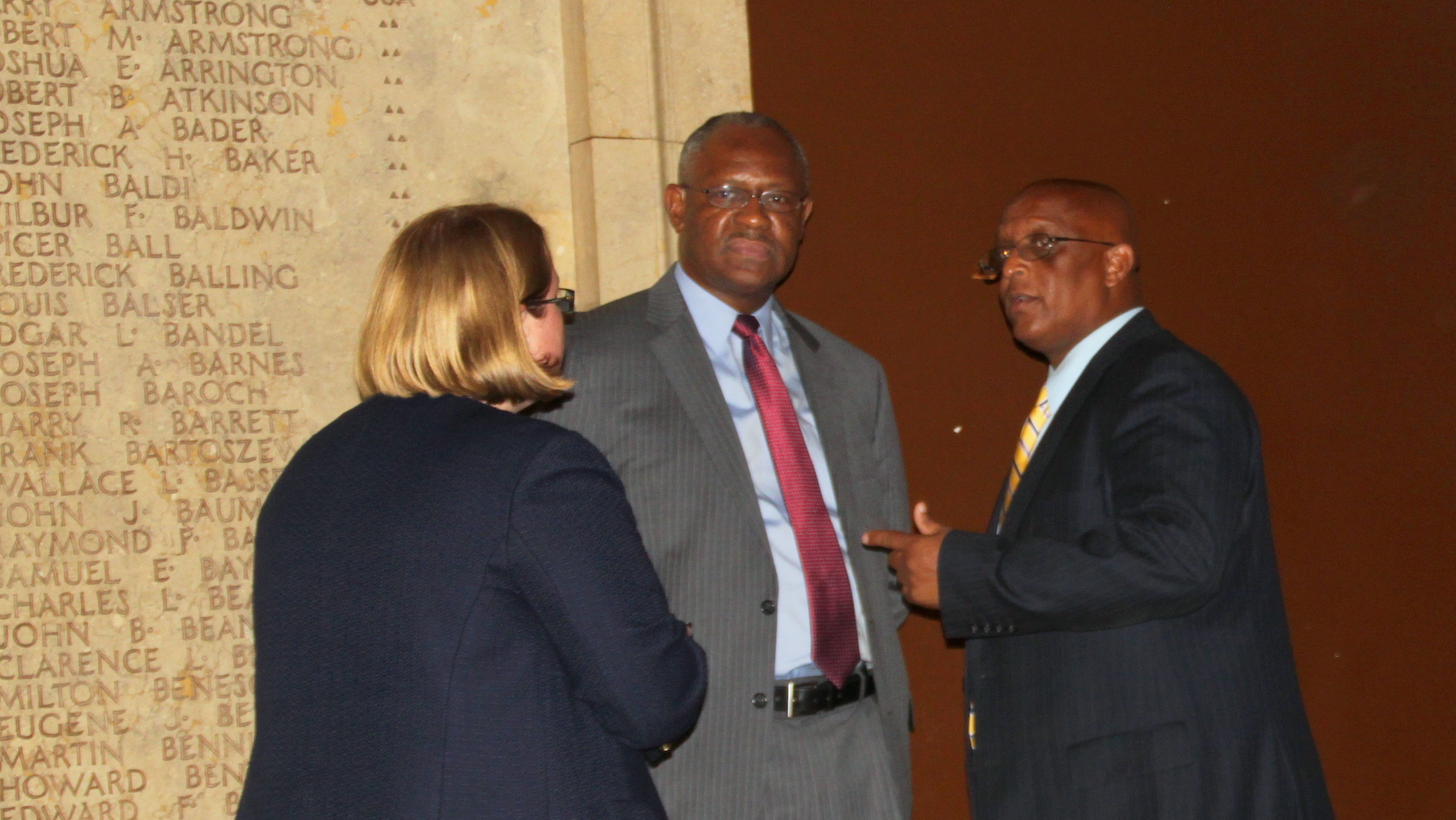 Stokes later said that he thought the committee was going to push the bills through.

“I obviously got a little heated because colleagues of mine who disrespected the process previously were about to do that again,” he told a throng of reporters.

This, Stokes explained, was a reference to the tempestuous 2013 meeting where that same committee approved the $107 million TIF for Harbor Point after Stokes had walked away.

“They decided to hijack the process for the purpose of passing legislation without amendments and without the public getting a full hearing on the issues,” Stokes told The Brew at the time.

Although a summary had been released earlier in the day, Sagamore and city officials were not releasing the actual text. Comptroller Joan Pratt said it would be on the Board of Estimates’ online agenda Monday.

Several speakers, as well as Councilman Bill Henry, called for the committee to delay action.

At one point during the meeting, Stokes signaled his approval. “I’m asking you not to leave the table,” he said, adding “the agreement is not signed.”

Stokes said several issues needed more discussion, including concerns that the project would cause city schools to lose millions in funding because of the project.

“I’m not yet satisfied about the wording of the hold-harmless” provisions in the agreement meant to protect the school said, Stokes said.

The previous TIF approval for Harbor Point also seemed to be on Stokes’ mind. “The community got zilch for it,” he remarked at one point.

Reminders of that contentious process hovered over the Port Covington voting session in other ways.

Among those present yesterday was one of the lobbyists hired by Sagamore to quarterback the TIF to passage, Rick Abruzzese of KOFA, LLC.

Formerly known as KO Public Affairs, that company was hired by Harbor Point developer Michael Beatty to steer his TIF financing through City Hall – and one of its principals famously clashed with Stokes, the project’s only vocal opponent.

In the bedlam after the recess, Stokes and BUILD’s Bishop Douglas Miles exchanged heated words, with Miles insisting the language is adequate and berating Stokes for holding up the bond bill vote.

Another concern is a profit-sharing agreement negotiated with Sagamore, but not released by the Baltimore Development Corporation.

Councilmember Mary Pat Clarke, not a member of the committee, raised other issues in a lengthy resolution she described that got applause from the crowd. 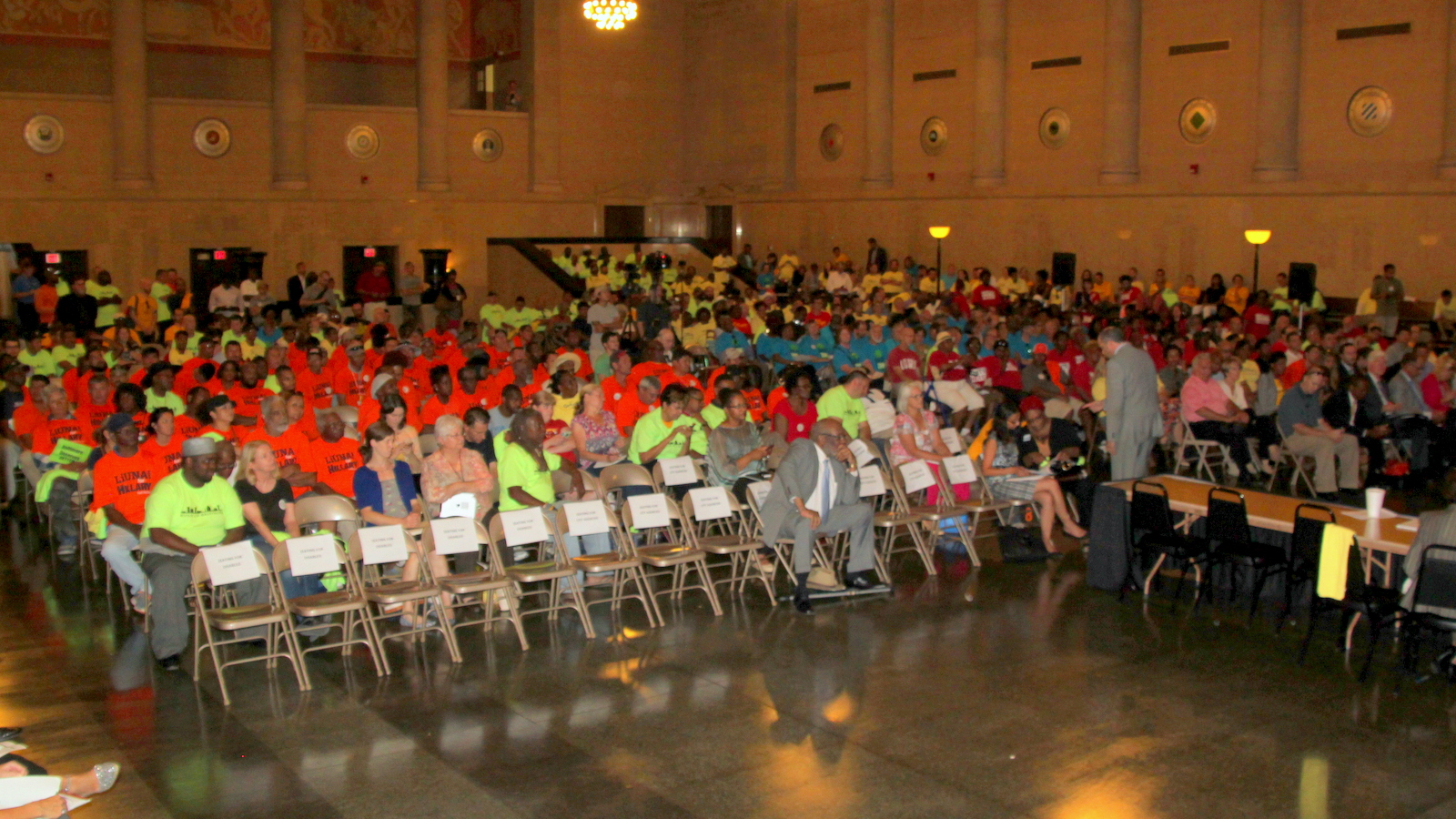 The resolution included prevailing wages for all building trades workers engaged in TIF infrastructure projects, a project labor agreement including union and non-union construction trades, a living wage and other provisions.

Port3 and Build Up, two coalitions who had been negotiating with Sagamore alongside BUILD, last week rejected the developer’s final offer.

The housing and justice groups said Sagamore’s offer was too weak on affordable housing, jobs and other areas. Hundreds of people from all three groups jammed the War Memorial Building to capacity last night.

Clarke’s resolution was not brought to a vote.

Voting to Resume Next Week

Afterwards, Stokes was asked when he would conclude the voting and he said “possibly next week.”

The pending bill is 16-0670, the Port Covington Bond Issuance.

The delay throws into limbo $660 million in infrastructure financing for a mixed-use development proposed on a 260-acre peninsula on the Middle Branch of the Patapsco River.

The massive project is being proposed by Under Armour CEO Kevin Plank through his private real estate entity, Sagamore.

“We are surprised and disappointed by the chairman’s decision, after voting two of the three bills out of committee, to recess this evening’s voting session without acting on all pieces of the Port Covington legislation and providing no explanation as to why,” he said.

BUILD commended Sagamore for “bargaining in good faith,” said what their negotiations moved the company to significantly improve its benefits package and blasted Stokes for a move they called “baffling.”

“As of 11 p.m. on Tuesday night, Chairman Stokes had committed to BUILD to pass the Port Covington TIF legislation out of committee, calling it ‘a team victory,’” the group said in an emailed statement.

“He changed his mind. We don’t know why.”