Considering the rancor and rhetoric around the Port Covington public financing subsidy – melodrama that has played out for months despite the “done-ness” of the City Hall-backed deal – Councilman Carl Stokes’ moment during the roll call vote last night was apt.

Stokes made extended remarks instead of declaring a simple “yes,” “no” or “pass” on the $660-million bond bill.

He praised his own taxation committee saying “they did a tremendous job.”

He complained that the Rawlings-Blake administration had provided “very little support” as the panel combed through 600 pages of material “to properly and strongly vet the bills.”

He explained why he suddenly recessed his committee last week, saying that City Hall still had not released a finalized community benefits agreement and that most of his Council colleagues had not read that key document.

And then he ended with this: “I vote yes for the bill.”

“All that for a ‘yes?’” said Cherry Hill’s Michael Middleton, from the audience. “Sheesh!”

Bill 16-0670 obligates the city to float bonds for infrastructure for the 260-acre mixed-use waterfront development over the course of a 30-year roll-out.

Stokes, who has nurtured a reputation for fiery critiques of developer subsidies, lost control of the bill last night after 11 of his 14 colleagues petitioned it out of his committee and brought it to an immediate vote of the full Council.

With all three Port Covington bills receiving preliminary approval, the measures come up for the pro forma final vote as early as next week.

The package would then go to Mayor Stephanie Rawlings-Blake, whose administration has championed the project.

Sagamore executives and lobbyists were in the packed Council chambers last night, as were supporters from BUILD and SB6 – some of whom briefly applauded the final vote.

“Baltimore and its leaders are ready for the tens of thousands of jobs and tremendous economic impact that will come from Port Covington,” said Sagamore president Marc Weller, who was in the audience, but commented via an emailed statement released last night. 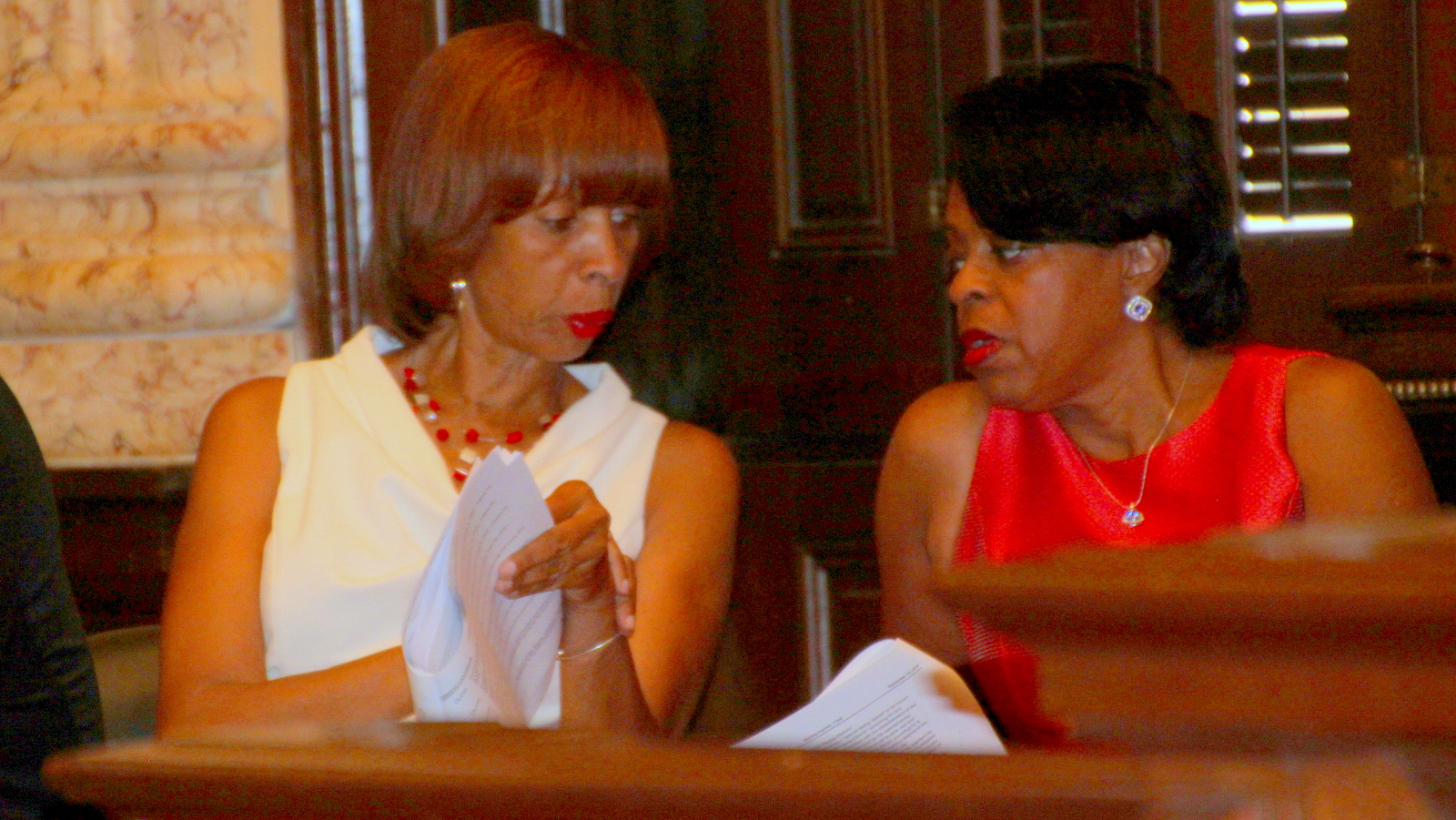 Also quiet amid the gaggle of reporters were Democratic mayoral nominee Catherine E. Pugh and Comptroller Joan Pratt, who sat side-by-side in the front of the Council chamber.

Asked earlier in the day by a reporter if she had any comment on Port Covington, Pugh had appeared surprised.

“Oh no!” she said, shaking her head vigorously.

The vote capped a tumultuous couple of weeks marked by dueling robo-calls and news conferences and bitter negotiations over the unprecedented financing subsidy sought for the project.

Leaders of the Port 3 and Build Up Baltimore coalitions, representing more than 100 faith, labor, justice, consumer and housing advocacy groups, had rejected Sagamore’s final offer, saying it was riddled with complex language and loopholes.

A third group, BUILD, signed off on a benefits deal with the company that they called “transformational.” The group said it yielded unprecedented local hiring provisions, affordable housing guarantees and other benefits worth $139 million.

The activists’ divergent paths made for hard feelings.

“Scab!” some in the audience had jeered at BUILD co-chair Glenna Huber during remarks she made at the Wednesday Council hearing. “Traitor!” several added. 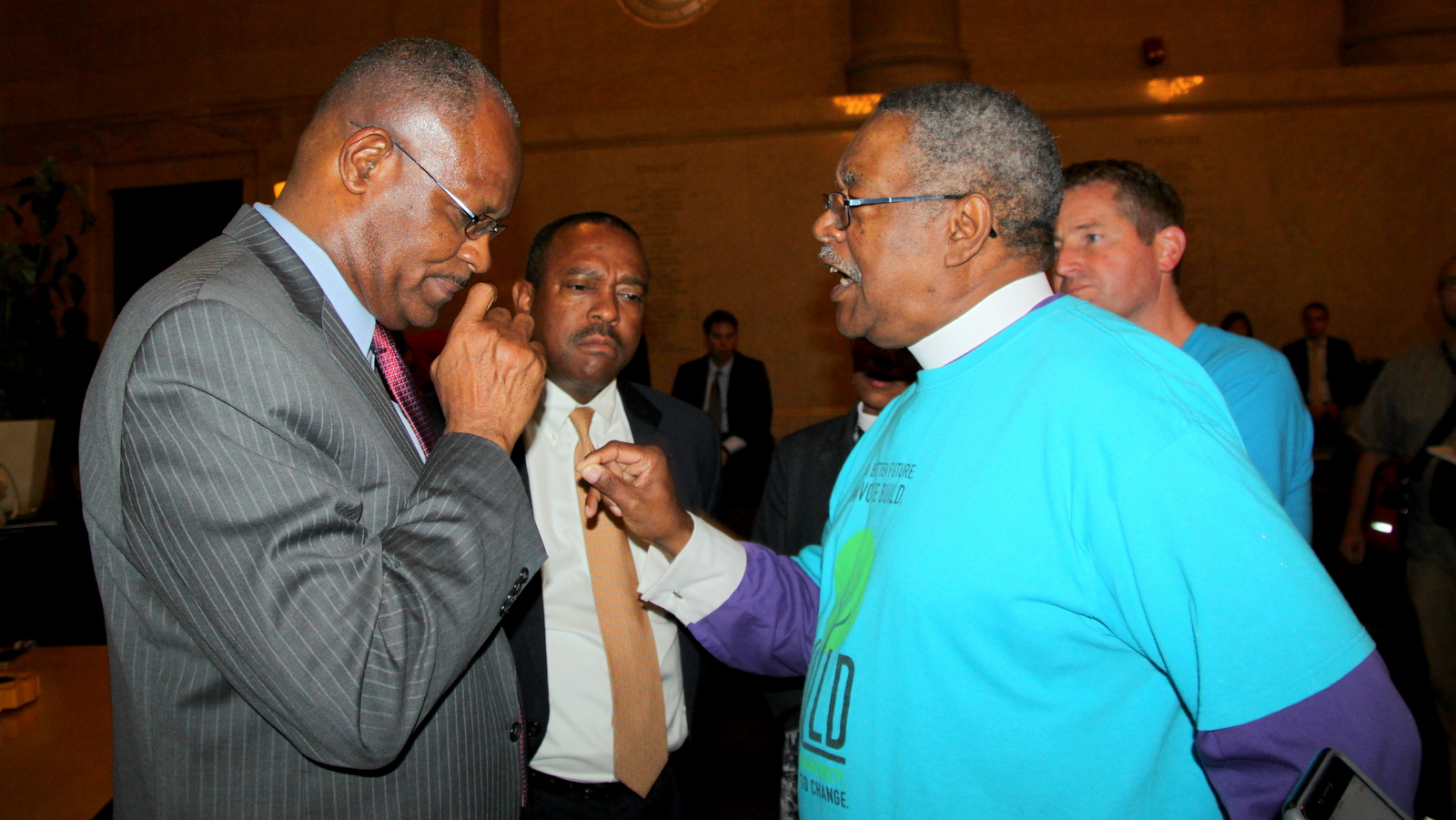 BUILD members, for their part, had been livid when Stokes abruptly recessed his committee before voting on the bond bill.

On Sunday, Stokes showed up at Brown Memorial Presbyterian Church where one of those ticked-off BUILD leaders, Rev. Andrew Foster Connors, is pastor.

Foster Connors acknowledged Stokes graciously, but also mentioned the bruising battle and announced that BUILD was calling for the Council to petition the bill out of committee.

“I attend different houses of worship. Enjoy most as I did today,” Stokes told The Brew on Sunday. “The fellowship and messages were great.”

In yet another twist, Stokes summoned the media to War Memorial Plaza in front of City Hall yesterday to tell them he was now “okay with it,” referring to Port Covington, and planned to vote for all three bills.

“There is no fight from Carl Stokes,” the 12th District Councilman said, prompting reporters to ask what changed his mind.

“I actually think we have something very good here,” he replied.

Stokes said he was swayed by personal assurances from Under Armour CEO Kevin Plank, who is developing the 260-acre waterfront project in connection with his company’s corporate campus. 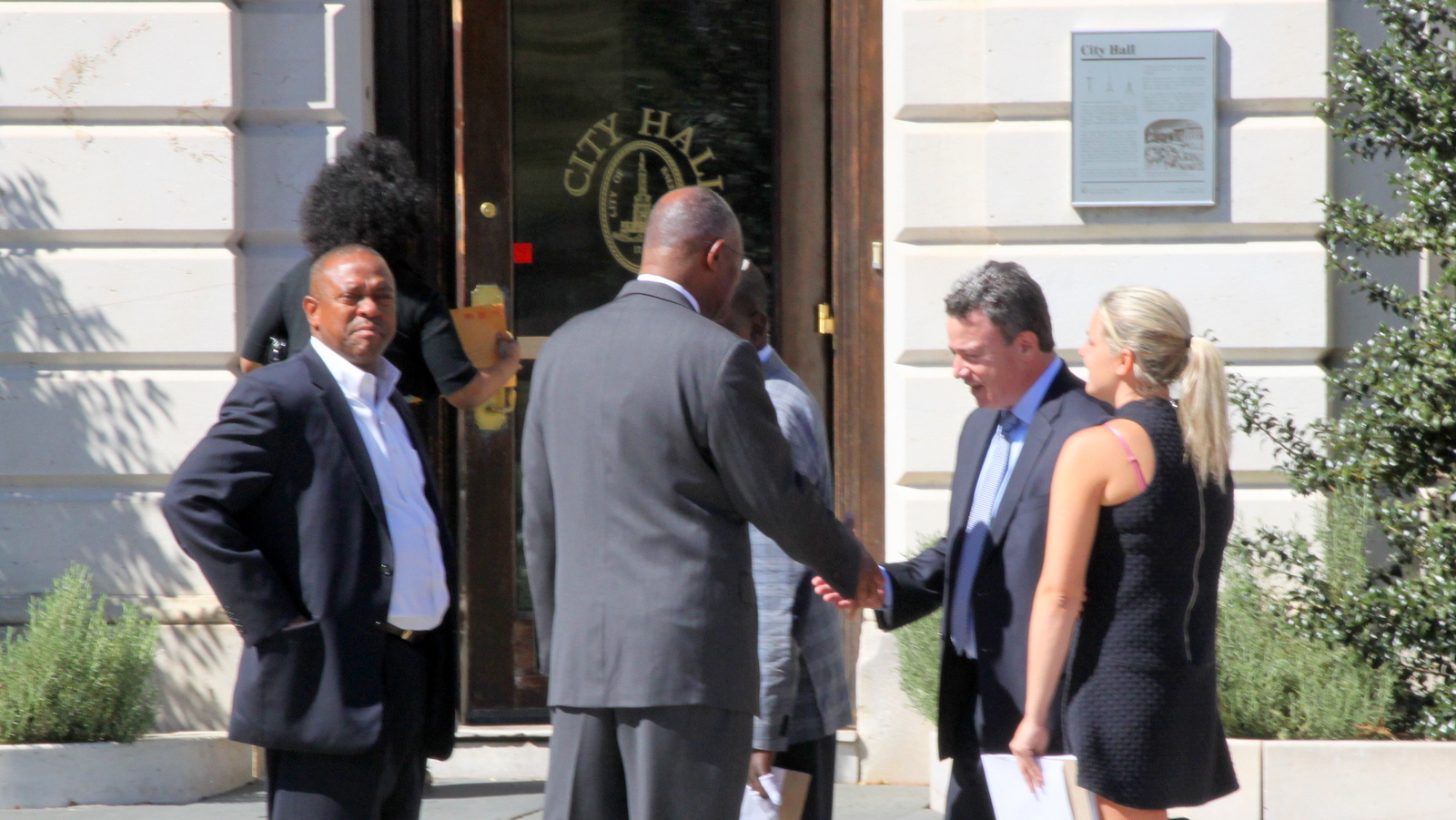 Plank met with him two weeks ago, Stokes said.

What exactly, reporters asked, does he believe Plank is going to do?

“I believe he means this to be an integrated project,” said Stokes. “I believe he intends to do that. I take him at his word.”

After answering a few more questions, Stokes walked back toward City Hall where he was met within seconds by Jon Laria, the attorney for Plank’s real estate arm, the Sagamore Development Co.