At the big field at Druid Hill Park set aside for the main stage for this year’s AFRAM, what action there was took place at the fringes.

On one side were vendors selling shea butter products and African-themed crafts and jewelry.

On the other side were the city agency tents, including one staffed by Baltimore police officers hoping to drum up new recruits for the force.

By mid-afternoon yesterday, only about 100 people stood in front of the stage at the far end where an exuberant children’s dance group and an eloquent spoken-word poet were performing.

“Well, it’s a lot of space so I guess the idea is everybody can spread out and kids can run around,” said Al Carroll, 50, a drywall finisher. “Maybe it’ll catch on more next year. I’ll bring my grand-kids.” 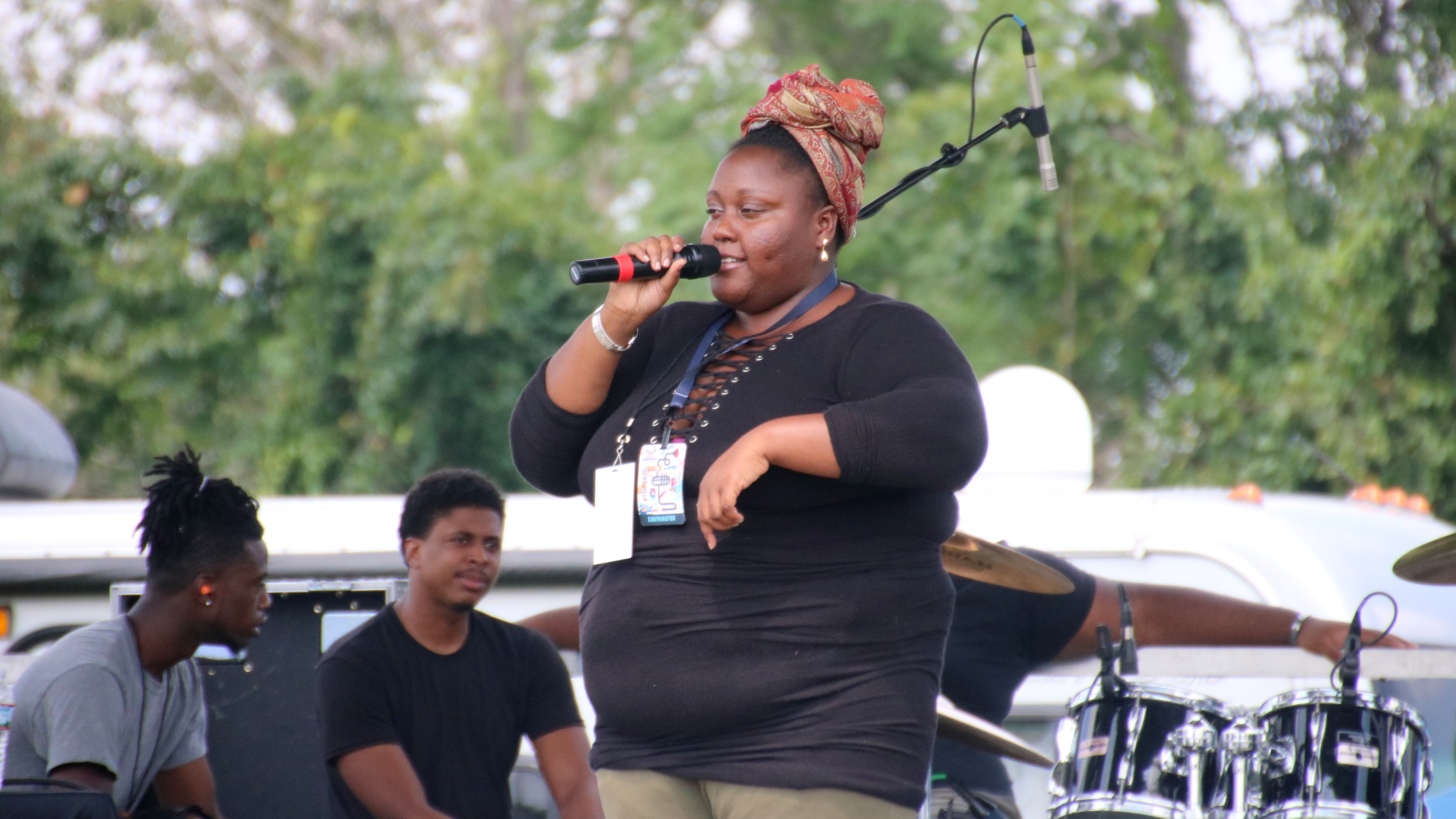 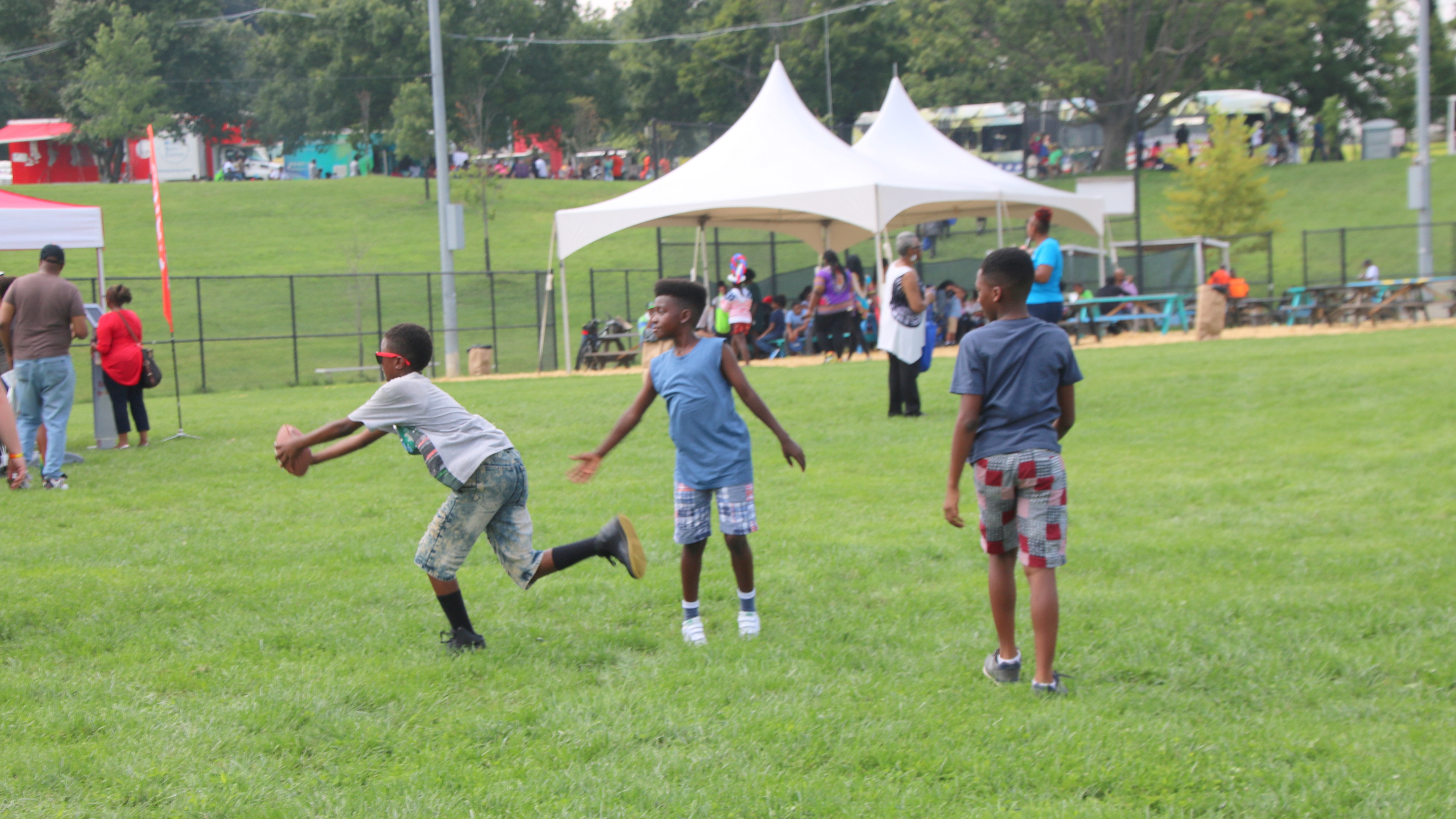 The empty festival field served as a good space for these boys to play football yesterday. (Fern Shen)

Relocated to the park this year by the new administration of Mayor Catherine Pugh and reduced from two days to one, AFRAM 2017 had nothing resembling the crowds that jammed the African American Festival in recent years.

When the event was a two-day affair held downtown at Camden Yards, it attracted national acts and what organizers said was about 200,000 people.

This year, city officials estimated that only 3,000 to 4,000 were in attendance.

“I’m not liking it. This is a joke, [Mayor] Pugh,” Reggie Washington, 29, said, walking along a park-road-turned-carnival-midway.

“AFRAM was cool. This is like a church picnic or a not-very-good block party. We already got those,” he concluded.

Models and a Moonbounce

There was a U.S. Army exhibit where kids and adults were challenged to perform push-ups and could get personalized dogtags.

Children ricocheted inside a moonbounce. HIV tests, blood pressure measurements and other health screening were offered.

At a stage set up in a wooded area, there was a fashion show featuring both women in shiny, slinky dresses and high heels and kids in what looked like back-to-school wear. Relief from the sun and Michael Jackson music attracted a small crowd and some dancing. 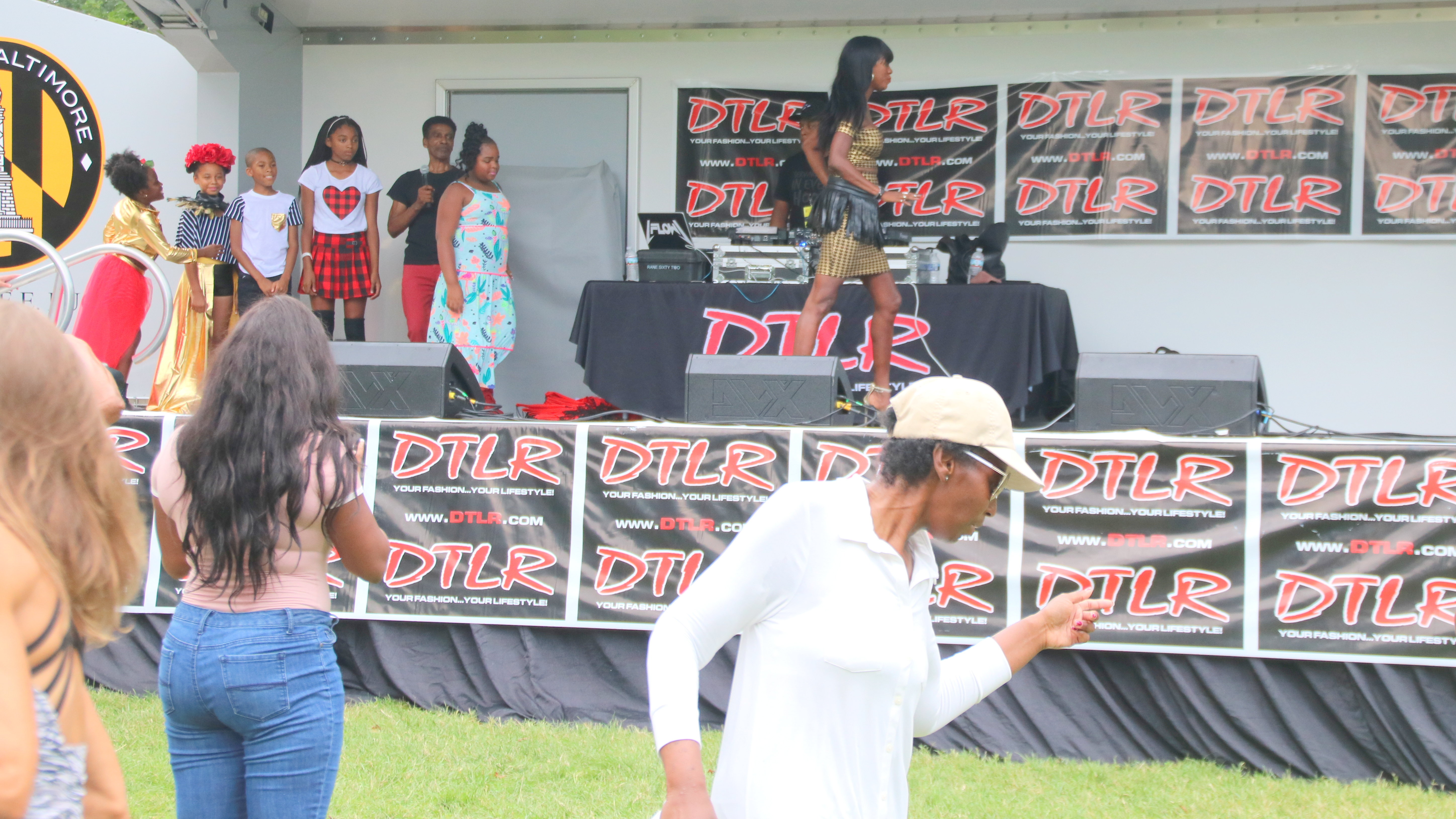 Kid and adult models strut their stuff to the musical backdrop of “Billie Jean.” (Fern Shen) 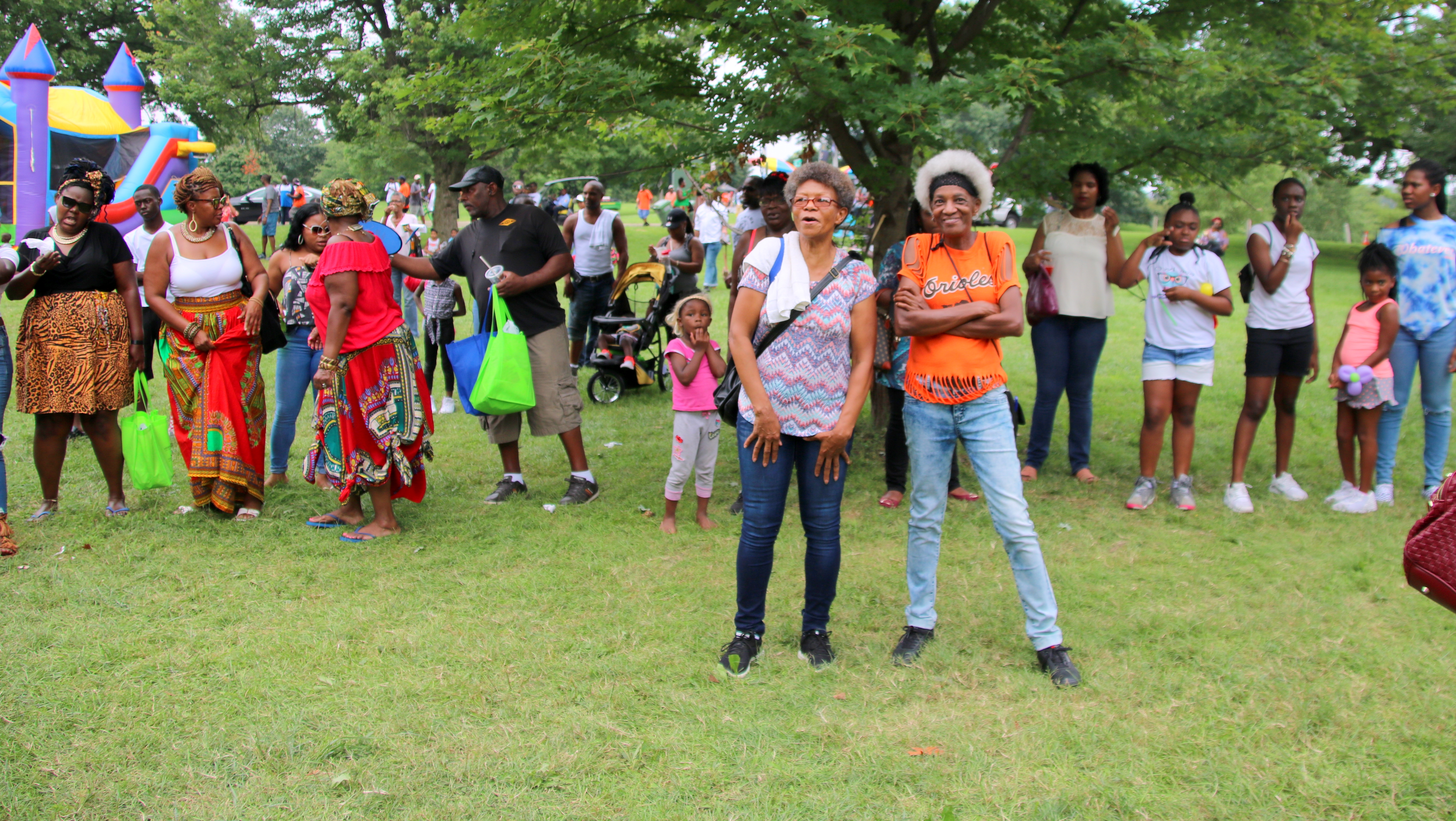 Pugh has described the downsizing as an effort to save money and make the event, a 40-year-old tradition in Baltimore, more family friendly.

“There were smaller stages for local kids, but it was more tight-knit than this, you could find things, you would run into people you knew.”

Compared to previous AFRAMs he has attended, this year’s was “unorganized,” he said, and the crowd was skimpy.

“And you can’t find anything,” Swagg fumed. “Before it was downtown by transit stops. And it had the big music acts, too. It made sense.” 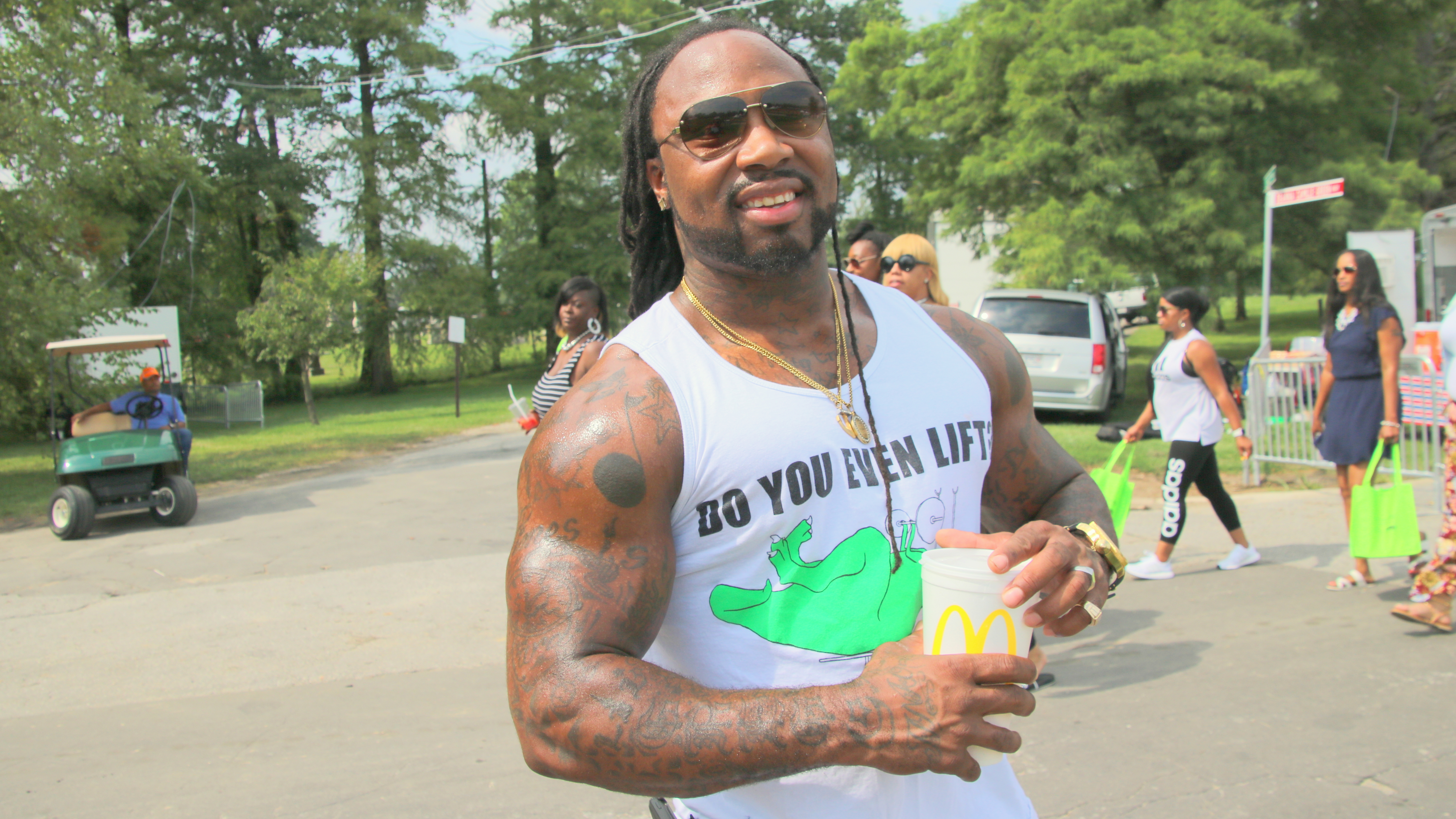 Not everyone was so down on the event.

Mae Beads, a 74-year-old substitute teacher, was eating lunch at a picnic table listening to the poetry and music coming from about a football field’s length away.

“I like it being here at the park,” she said. “People can sit on the grass. You got kids playing football. It feels like a family thing. You meet people.”

Sharing the table with Beads, and lunching on chicken curry and oxtail stew, were two people she had just met who told her they were originally from Guyana.

“It feels maybe a little safer here,” said Roxanne Marsh, 55, of Rockville, who was with Leroy Halliman, 62, of Prince George’s County. 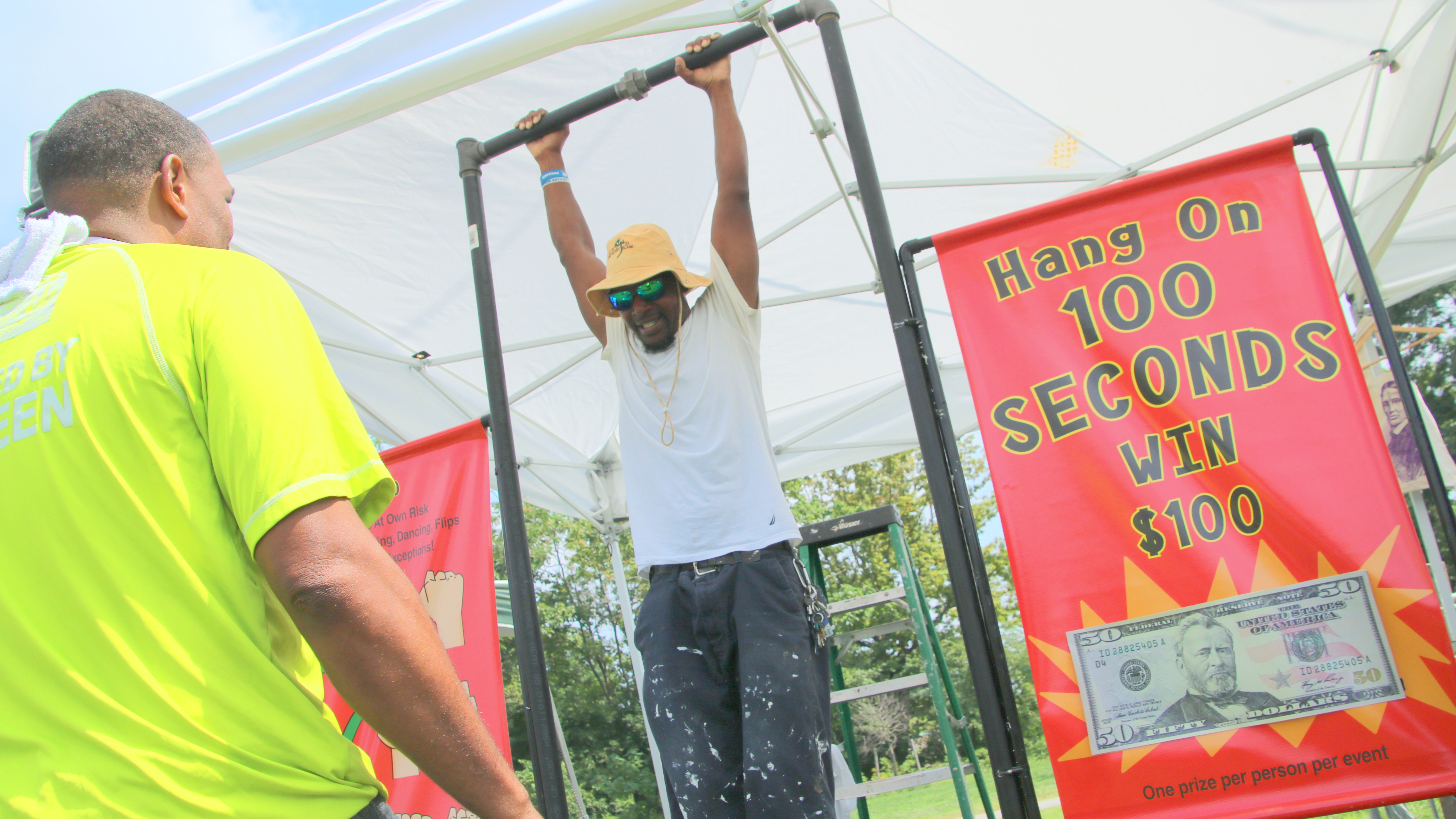 At an AFRAM booth, Al Carroll dangles by his hands trying to win the $100 prize. (Fern Shen)

Carroll said he hoped the event would be returned to two-days rather than one (“It should really be a week”). He wondered if the mayor’s venue switch might have been an effort to harken back to when AFRAM had was at Druid Hill Park.

“It seemed to work then,” he said before adding, “though that was a different era.” 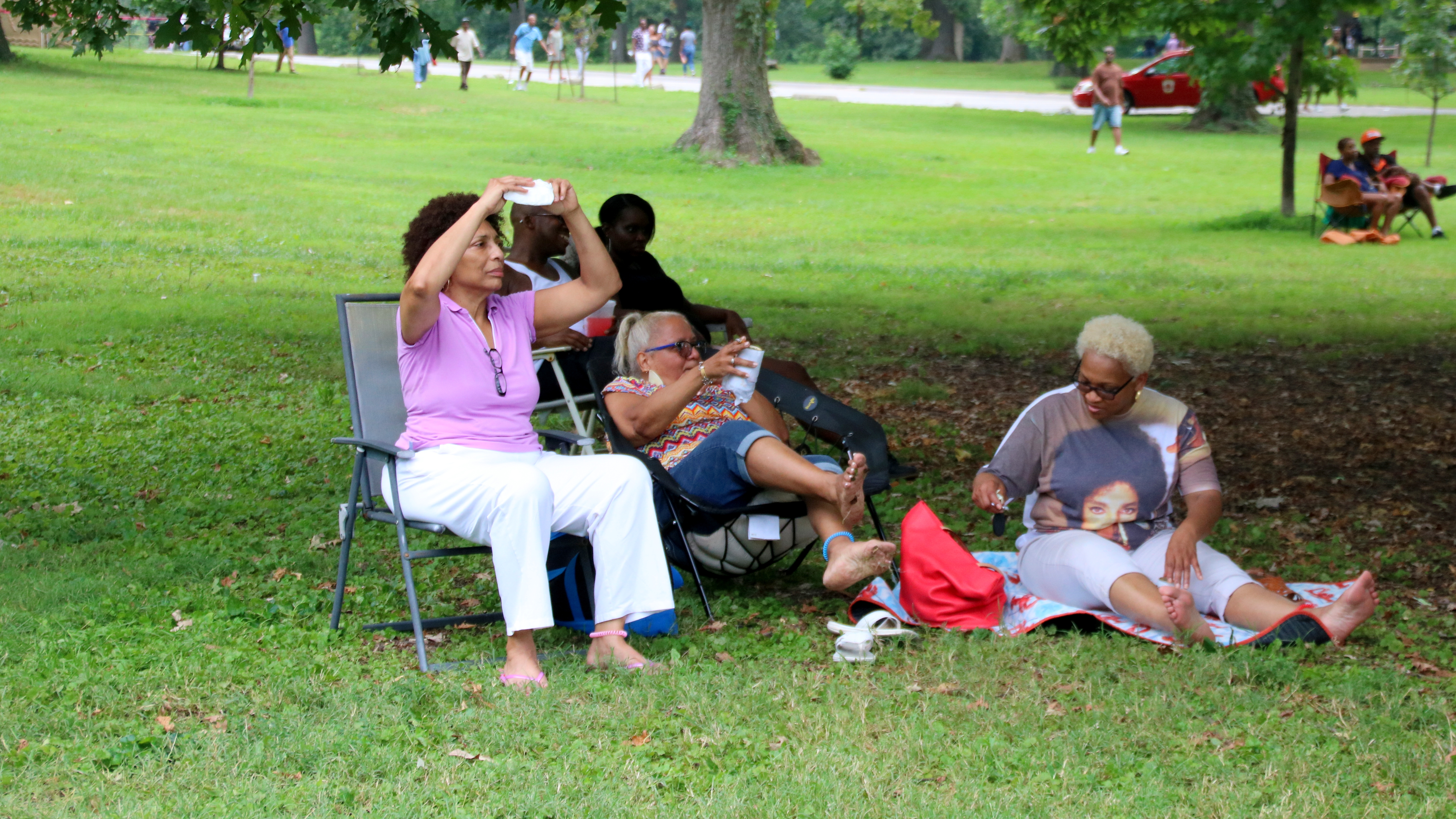 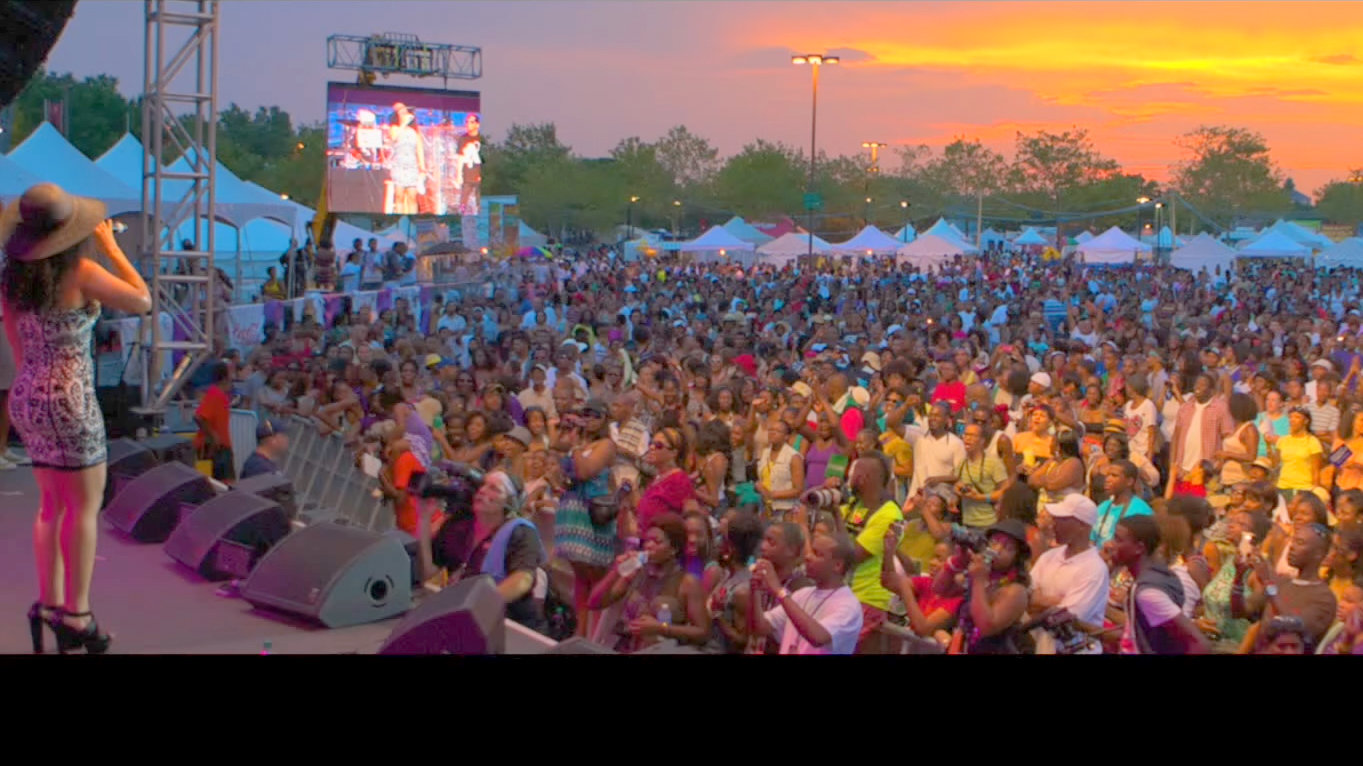