Baltimore’s Inspector General has a big responsibility – rooting out waste, fraud and abuse in city government.

But the IG also has a big limitation – he or she serves at the pleasure of the mayor with limited powers.

Hoping to strengthen the office through a charter amendment that would make the IG independent from the mayor and give the office subpoena powers, a group of citizens kicked off their campaign in front of City Hall yesterday.

“It’s important to have an Inspector General that’s above the fray of politics, so that it’s not a politicized position,” said Marceline White, of the Baltimore Committee for Accountability and Transparency, a coalition formed to get the charter amendment onto the November 2018 ballot. 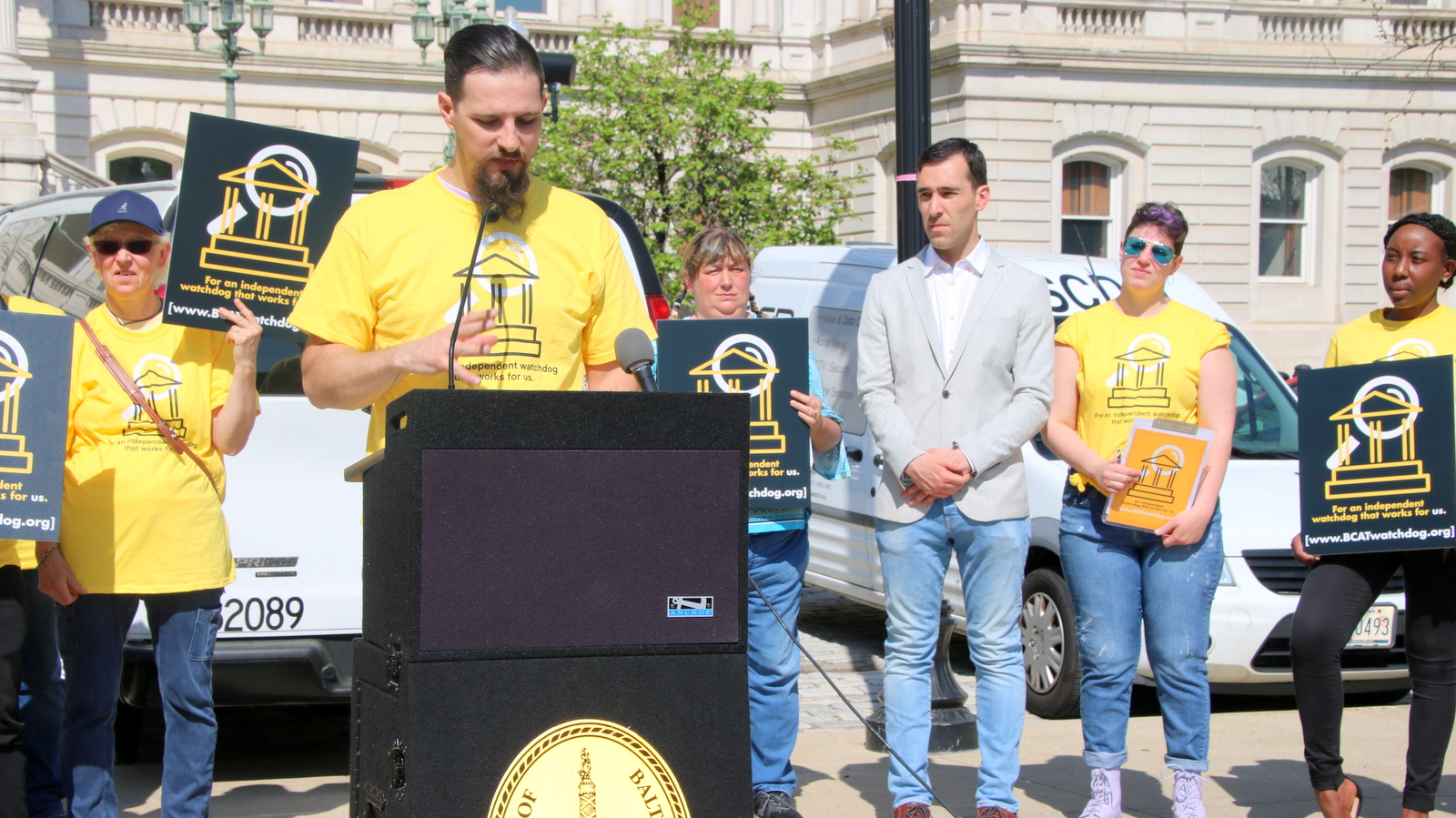 Councilman Ryan Dorsey is calling for a stronger, more independent Inspector General. To his left wearing a jacket was the only other City Councilman to attend the event, Zeke Cohen. (Fern Shen)

The group aims to collect 15,000 signatures in order to get the amendment on the November ballot.

In addition to White’s group, the coalition includes concerned individuals and and the good government group, Represent Maryland.

Prior IG Forced to Resign

Under the proposed charter change, the IG would be appointed by a nine-member advisory board comprised of:

The Inspector General would have subpoena powers to pursue investigations, a set annual budget and more insulation than present from influence by the mayor’s office.

Baltimore’s former inspector general, Robert H. Pearre, says he was forced to resign in 2016 after he began looking at a politically sensitive topic – staff complaints about the running of the Mayor’s Office of Information Technology (MOIT).

Part of the fallout of the thwarted investigation of MOIT director Jerome Mullen was the August 2016 firing of longtime city solicitor George Nilson by then-Mayor Stephanie Rawlings-Blake.

(Mullen himself was removed from his post by Mayor Catherine Pugh in early 2017.)

More on the IG:

• Strengthening Baltimore’s anti-corruption watchdog won’t be easy (12/27/17)
______________________________
“Our city desperately needs money,” White explained. “So we need to have a city government where people are not over-charging us, whether it’s a procurement contract or overtime or certainly bribes as with the trash haulers.”

“With a fully staffed office and someone with much more powers, I think we can do much more,” she said, adding that “having more accountability is what government needs to do to build trust.”

If the proposal sounds familiar it, it should be – Councilman Ryan Dorsey proposed virtually identical changes in a bill introduced in March.

“I put forth this bill because Baltimore deserves for its government to employ best practices,” he said yesterday.

“We need a strong independent oversight office whose funding is secured so that they can’t have their staff cut in the future if future mayors are afraid of investigation.”

Dorsey said his proposals are not intended to be a criticism of the current mayor.

“I’m really trying to stay out of the weeds on this and let the process play out,” she said. “But I think independence is the central feature of the most effective inspectors general, it’s part of best practices around the country.”

“I’m very confident that by November we’re going to have something positive on the ballot,” she said.

Pugh Has Other Ideas

Pugh has not yet publicly commented on Dorsey’s bill, but her spokesman, James Bentley, signaled yesterday that the mayor is approaching the IG question on a different track.

Bentley said the mayor’s Charter Review Commission has reviewed the matter and will be releasing its recommendations “in the coming weeks.”

The Inspector General’s office was established through an executive order by former Mayor Martin O’Malley. Bentley says Pugh “supports codifying the OIG in the city charter and ensuring the office is independent.”

White said one reason that BCAT is pushing for a charter amendment is because of concern that Dorsey’s bill might be weakened in committee.

“It could come out of the City Council considerably weakened by amendments,” she said. “We need the strongest bill possible.”

No hearing has been scheduled yet for bill 18-0199 by the Judiciary and Legislative Investigations Committee chaired by Councilman Eric Costello.

Costello has not responded to questions from The Brew about the status of the bill.

Asked yesterday whether a charter amendment would supersede a bill passed by the City Council, Dorsey said, “I don’t know.”

Adding to the confusion is the possibility that the mayor will submit her own IG bill based on the Charter Review Commission’s recommendations.

Dorsey said yesterday that pushing for reform legislation in both the Council and the community is a way of “putting the pressure on to make sure that we get this done.”

He added, “I’m not unwilling to compromise. . . If we have an amended version of the bill that gets the job done, that’s still a win for this coalition.”