Local developers cleared a key hurdle in their quest to convert the former Strawbridge United Methodist Church in Bolton Hill to 11 apartments, despite protests by area residents concerned about the project’s potential impact on parking in the neighborhood.

After an hour-long hearing, Baltimore’s Board of Municipal and Zoning Appeals voted 3 to 0 on Tuesday to approve plans by developers Ben Frederick III and Greg and Darma Kamenetz to convert the vacant church and an adjacent former parsonage at Park Avenue and Wilson Street.

The development plan calls for eight apartments in the former church sanctuary and meeting hall, which date from the 1880s and have been vacant for about 10 years, two in the former parsonage at 213 Wilson Street, and one in a smaller structure behind the parsonage.

The project will be dubbed Strawbridge Apartments.

The project is a test case of the city’s new TransForm zoning code, which permits redevelopment of certain historic properties to occur without providing on-site parking, as a way of encouraging preservation of significant buildings in historic districts.

In this case, Planning Director Thomas Stosur agreed to waive the parking requirement so the church could be preserved. 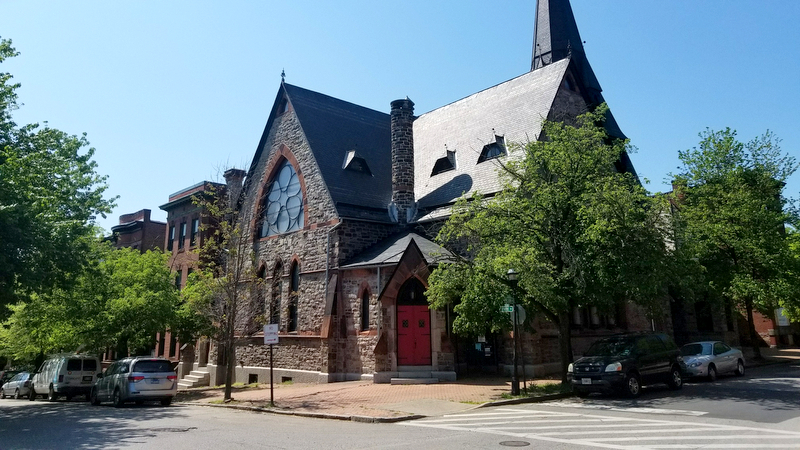 The decision has upset some Bolton Hill residents who say there is already a parking shortage in the neighborhood and this development could make it worse.

The Bolton Hill Community Association board narrowly supported the 11-unit conversion, but its president, Linda Rittelmann, encouraged members with concerns to share them with the zoning board.

At its meeting, the zoning board was not ruling on the parking decision, because it was already made by the planning director. But the subject of parking was raised by neighbors who sought to limit the number of apartments on the church property and wanted the zoning board to reject the plan for 11 apartments.

Much of the discussion focused on the former parsonage. Park Avenue resident Victor Sparrow asked the board whether the planning director’s waiver of parking requirements for the former church at 201 Wilson Street applies to the parsonage as well. He was told that it does. 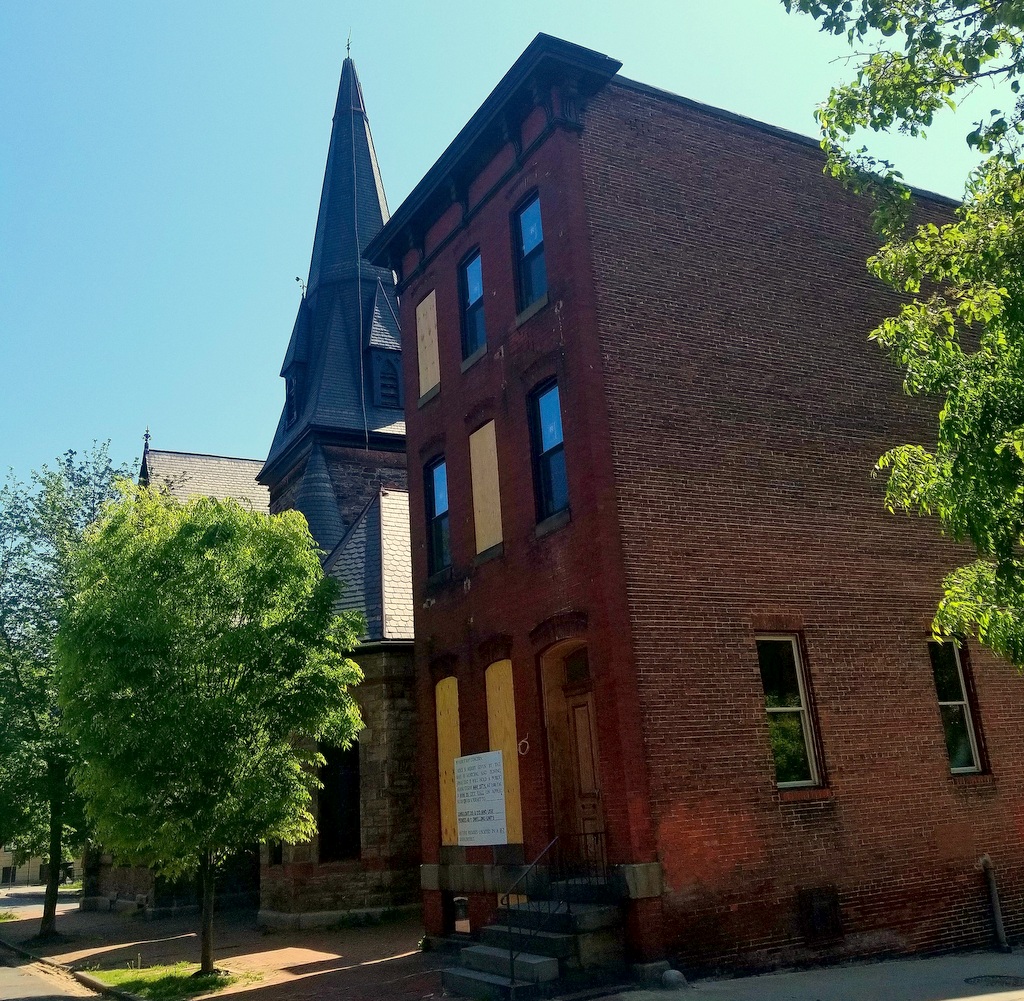 Converting the parsonage into two apartments, rather than a single-family residence, was a focus of objections by some area residents. (Ed Gunts)

Opponents of the 11-unit plan argued that the parsonage was essentially a single family dwelling, and the Bolton Hill community board has a longstanding policy of not supporting plans to convert single-family residences to multi-family properties.

Park Avenue resident Sarah Anderson, an opponent of the 11-unit plan, said the building may have been a parsonage at one time, but it hasn’t been used as such for many years, and it was last used as a thrift shop run by the church.

Because the former parsonage is now vacant, she said, it should be considered a single-family house. She said the community association is contradicting a longstanding policy by backing plans to convert it to two apartments.

Charlie Duff, a Bolton Hill resident who heads the association’s zoning committee, said the community organization is not violating its policy.

The parsonage has always been part of the church property and was never a separate residence. By backing the plan to turn the entire property to apartments, the association isn’t contradicting its policy.

“There is some talk that the zoning committee is turning its back on 95 years of history by [supporting a plan for] turning a house into two apartments. We don’t think that’s the case.”

Duff said the goal of his committee was to find a way to preserve the entire assemblage.

“This is a beautiful complex of buildings,” he told the board. “This is going to preserve these wonderful structures. It is going to be good for the neighborhood.” 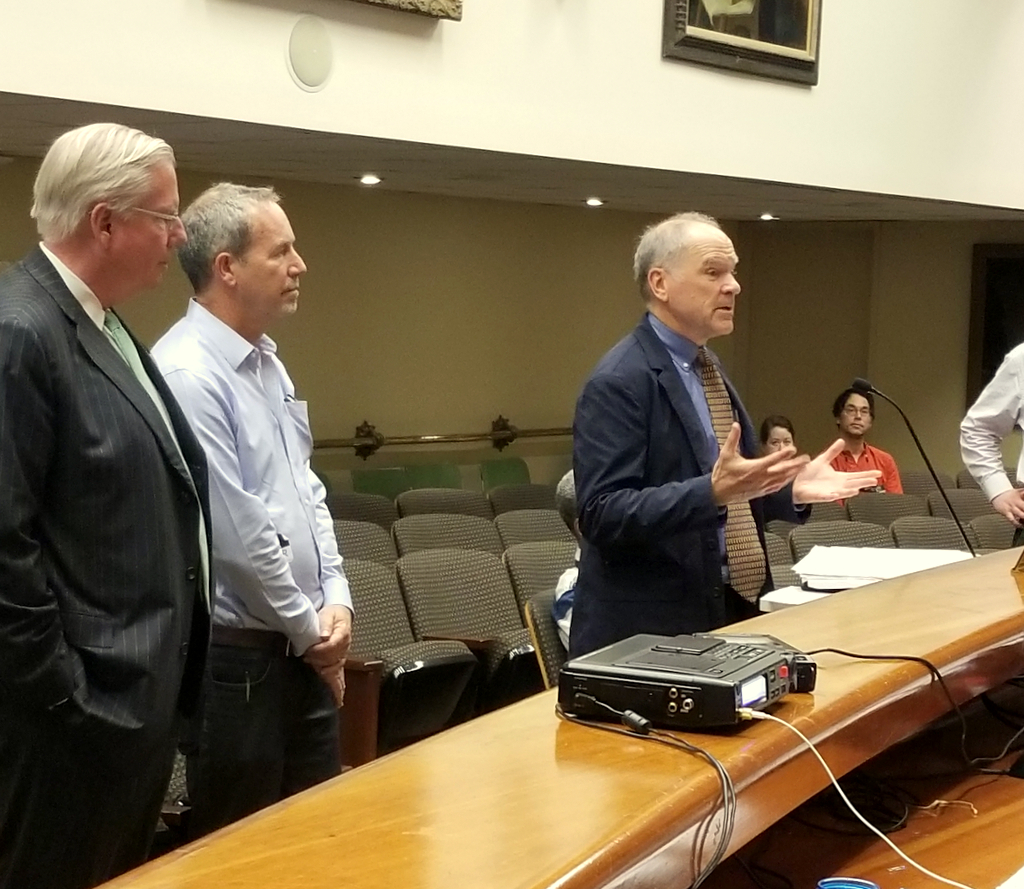 Members of the zoning board agreed that the parsonage is not the same as a single-family dwelling. They said city records show it has always been an ancillary use to the church, either as an “educational structure for a Sunday school” or a residence for clergy members associated with the church.

“It’s being referred to as a parsonage, but is it an actual parsonage?” asked zoning board member Geoffrey Washington. “In my mind, a building is a building. It’s been used as a lot of things over the years. I haven’t heard of it being used as a residence” separate from the church.

Park Avenue resident Will Garlow countered that the parsonage looks like a single-family dwelling to him. “To use Mr. Duff’s analogy, if it walks like a duck and talks like a duck, it’s a duck.”

Frederick said the developers could turn the parsonage into one residence, but it would have a lot of bedrooms and probably would attract college students. His team tried to make most of the apartments one-bedroom units to keep down the number of occupants in any one apartment.

Frederick told the board that the development team has identified 12 private garage spaces nearby that could be used by residents of the Strawbridge Apartments. He said four are behind the house at 1600 Park Avenue and others are on Bolton Street.

Zoning board members asked whether Strawbridge’s use of the garages would simply displace others who park cars there now and might resort to parking on the street. Frederick said some of the garages are used for storage, not parking, so his team’s plan wouldn’t necessarily make the parking situation significantly worse.

The zoning board agreed to postpone a hearing about a second Bolton Hill property that has drawn some concerns, the proposed conversion of a building in the 1200 block of Eutaw Street to 23 apartments.