Baltimore city voter Paul Gardner got the email from the state Board of Elections at 4:51 p.m. yesterday, one day before the 2018 primary election:

“On Friday, June 22, we learned that, because of a computer programing error, the Maryland Department of Motor Vehicle Administration did not provide us with your new address,” the message began.

“This means that your voter registration has not been updated with this new information,” the message said, informing Gardner that he would have to vote a provisional ballot.

Thus, Gardner learned that his vote was caught up in a widening election controversy that has Democrats calling for MVA chief Christine Nizer to resign and accusing Republican Gov. Larry Hogan of possibly suppressing today’s primary vote.

After announcing Saturday that the MVA had failed to forward election information for 19,000 people to state election officials, the agency announced last night that it had since discovered the mistake actually affected 80,000 people.

But the “glitch” appears to be wider than that.

MVA officials said the error involved people who changed their addresses or party affiliation at an MVA office.

Gardner, however, had had no contact with the MVA, he told The Brew.

The only thing that changed for Gardner – who moved  from Anne Arundel County to Baltimore in 2006 and has voted without issue at his current city address in 2012, 2014 and 2016 – is that he registered for jury duty in the city.

“When I registered to vote [in Baltimore], I assumed that also put me in the city jury pool,” he said. “I didn’t think anything of it until I got summoned [for jury duty] in Anne Arundel County in 2017, and, at that point, I registered for jury duty in the city. That’s the only thing I can think of that might have affected anything.”

It appears that Gardner and tens of thousands of other voters across Maryland will have to fill out paper provisional ballots today. [UPDATE: Gardner was told at his polling place, the Waxter Center, that he does not to use a provisional ballot.]

Election officials are required to begin counting them on July 5.

The process could delay the outcome of a close vote for more than a week after the primary.

Gardner said he did not accept state officials’ statement that the incident amounted to an innocent computer or administrative foul-up.

“I think in 2018 with voter suppression being the goal of Republicans, ‘voting irregularities’ should be treated the same as an intentional act to disenfranchise voters until it can be proven that it wasn’t,” he said. “‘Oops,’ shouldn’t be a plausible excuse anymore.”

On Friday, when the problems were first reported, Hogan’s office expressed concern and promised to correct the “glitch,” but denied the allegations of voter suppression.

“This conspiracy theory is so absurd and hateful that it should not be dignified by a response,” Hogan spokeswoman Amelia Chasse said. “Suffice it to say we welcome an inquiry as it will demonstrate this is nothing more than an unfortunate clerical error.”

“Yesterday, the Governor’s office brushed off criticism of the MVA as a ‘clerical error’ and a ‘conspiracy theory.’ Today, they revealed the problem is exponentially worse than they told us, affecting 80,000 Marylanders that we know of,” said Sen. Joan Carter Conway and Del. Ann R. Kaiser in a joint statement called for Nizer to step down.

Hogan has ordered an audit of what went wrong, while legislative leaders vow to hold hearings.

“For decades, the MVA has been one of the main avenues for Americans to register to vote,” Damon Effingham, acting Director of Common Cause Maryland said. “This news represents a catastrophic failure by the MVA in their duty to ensure every eligible Marylander has access to their right to vote.”

Eligible voters in Maryland will still be able to cast provisional ballots – though those ballots will not be counted until the second Wednesday after Tuesday’s primary, Effingham noted.

He said election workers must verify the eligibility of voters against voting records but that it is unclear at this time how long it will take the MVA to properly transmit their updated registration data for this purpose.

“This event underscores the absolute necessity to modernize and expand access to our registration systems through processes like Election Day Registration,” Effingham added.

“Election Day Registration, which will be on the ballot for voters to approve in November, would have provided a vital safety to help ensure that no eligible Marylander has to go through the confusion this failure has created again.” 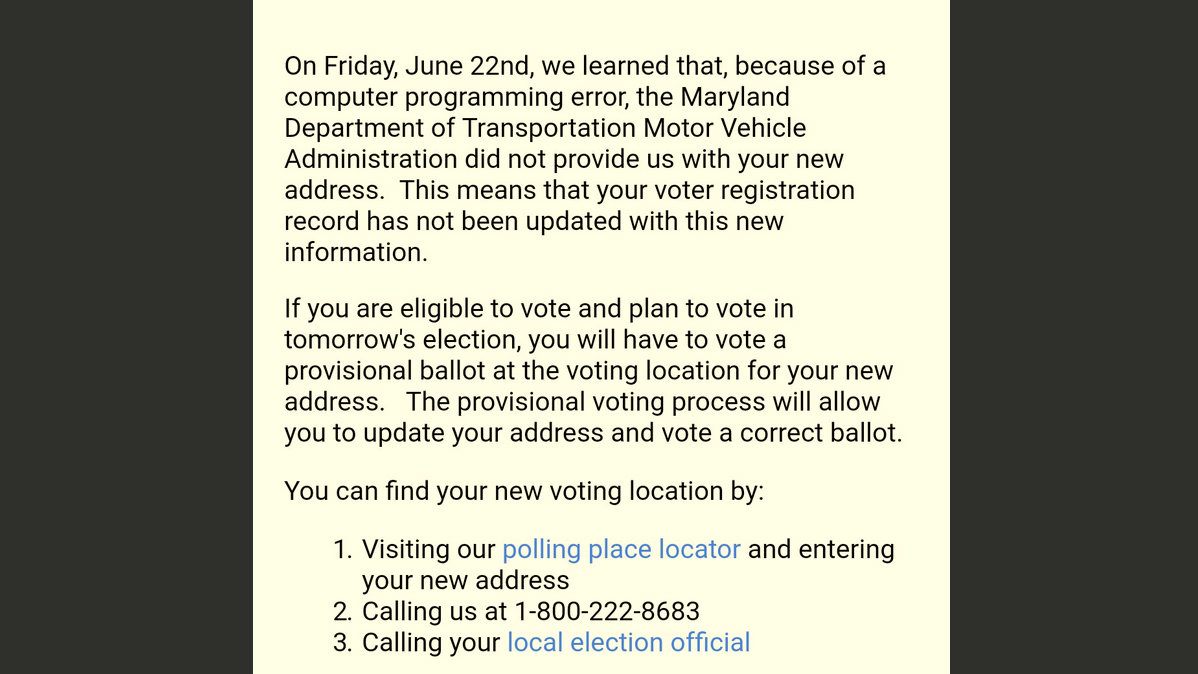 The email that voter Paul Gardner got yesterday from the Maryland Board of Elections. (@paulgardner)