Early this morning, with temperatures outside in the teens and arctic air blowing across Baltimore, students, teachers and parents rolled over in bed and checked online to discover what, to many, came as horrible news:

Unlike pretty much every other jurisdiction and every private school in the region that delayed the start of school by two hours, city schools were on a regular schedule.

“It’s 16 degrees outside. It is cold. 16. Probably icy & I know sidewalks not clear,” one of scores of angry people said on Twitter. “Y’all couldn’t give us  a two-hour delay?” 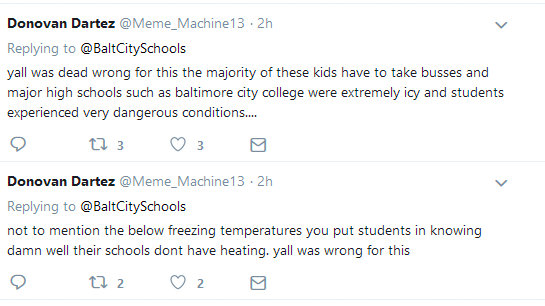 This evening’s announcement of a two-hour delay tomorrow – Thursday – brought applause from some, but mostly calls for school to be canceled completely.

“The best and SAFE decision…. CLOSE SCHOOLS,” one woman wrote on Twitter.

“Kids have to travel by public transportation meaning they have to stand in that weather, wait for the bus and then probably have to walk a distance to get to their school.”

On Thursday, defending Baltimore’s decision not to cancel school entirely, a teacher pointed out that the school system is constrained by Gov. Larry Hogan’s 2016 order that schools in Maryland must not start before Labor Day.

Many of those complaining online brought up school buildings they said are poorly heated. Students’ frigid walk to school, they pointed out, could end in a cold classroom.

“I hate my child missing so much time, but honestly I can’t have my child in those conditions,” said Lakeanya Brown, who kept her daughter home from Patterson High School today.

Brown told The Brew many classrooms at Patterson are cold this year, as they were last year. As a result, her daughter, a 10th-grader, stays bundled up in school.

“She has to keep her coat on throughout the day,” she said. “But I don’t send her on days like today, though.”

Calamity a Year Ago

The only school shut down today was Cecil Elementary School in East Baltimore, which closed early due to “a utility company power outage.”

Last year, Baltimore schools made national headlines when students returned from the winter break to find classrooms flooded, boilers broken and frosty conditions in schools across the city. Problems were reported in 85 schools.

Amid mild weather until now, those problems have been fewer this year, according to Fullerton, citing the district’s preventive maintenance efforts.

“The process is we have people from our Transportation Department go out between midnight and 2 a.m. and assess the streets and sidewalks,” she said. The final call is made in the early morning.

“It was their assessment [today] that the roads were clear,” she said.

Fullerton said the school system typically errs on the side of saying open because, in addition to providing instruction, schools offer students meals, health care and other needed services.

Thursday is forecast to be the coldest day of a cold week. Early-morning lows will be in the single digits. Wind chills will make it feel like 10 degrees below zero, meteorologists say.

Fullerton said the school system is keeping a close watch on school building conditions with the remote monitoring system it has installed this year.