For years, the people who put on Baltimore’s annual Artscape festival had an idea for making preparations a little easier:

Rather than stringing temporary power lines like spaghetti to serve vendors and performers, planners reasoned, why not bury them underground in conduits?

That idea was actually carried out recently on Mount Royal Avenue as part of a long-planned streetscape overhaul by Baltimore’s Department of Transportation (DOT) that included a dedicated two-way cycle track.

It turns out the new concrete buffer that separates the cycle track from vehicles has made it difficult to position tents along the avenue, so festival organizers decided not to try.

Instead, they have changed the festival’s location this year so it doesn’t extend along Mount Royal Avenue north of the Light Rail line.

Vendors who were in this spot will be relocated. What’s more, the Maryland Institute College of Art (MICA) buildings north of the light rail line – traditionally a part of Artscape – won’t be open for the festival this year.

The wastefulness of the situation did not escape the notice of former Bolton Hill Community Association president and current board member Linda Rittelmann.

“All the time and expense that went into burying the cables for Artscape along upper Mt. Royal is for naught,” she wrote in a Facebook posting earlier this year. “Bolton Hill will benefit from relaxed traffic restrictions, but it’s a damn shame for all the work that went into the streetscaping project. Nicely done, DOT.”

“All the time and expense that went into burying the cables for Artscape along upper Mt. Royal is for naught.”

Bike advocates also point the finger at the DOT.

They note that Bikemore, an advocacy group, suggested a number of alternatives to the configuration that was built – and none of them included the concrete buffers that proved to be unworkable for Artscape.

“There were many ways to do this right and make a facility that is safe to use and enhances Artscape,” said the group’s policy director, Jed Weeks. “But DOT ignored every one.” 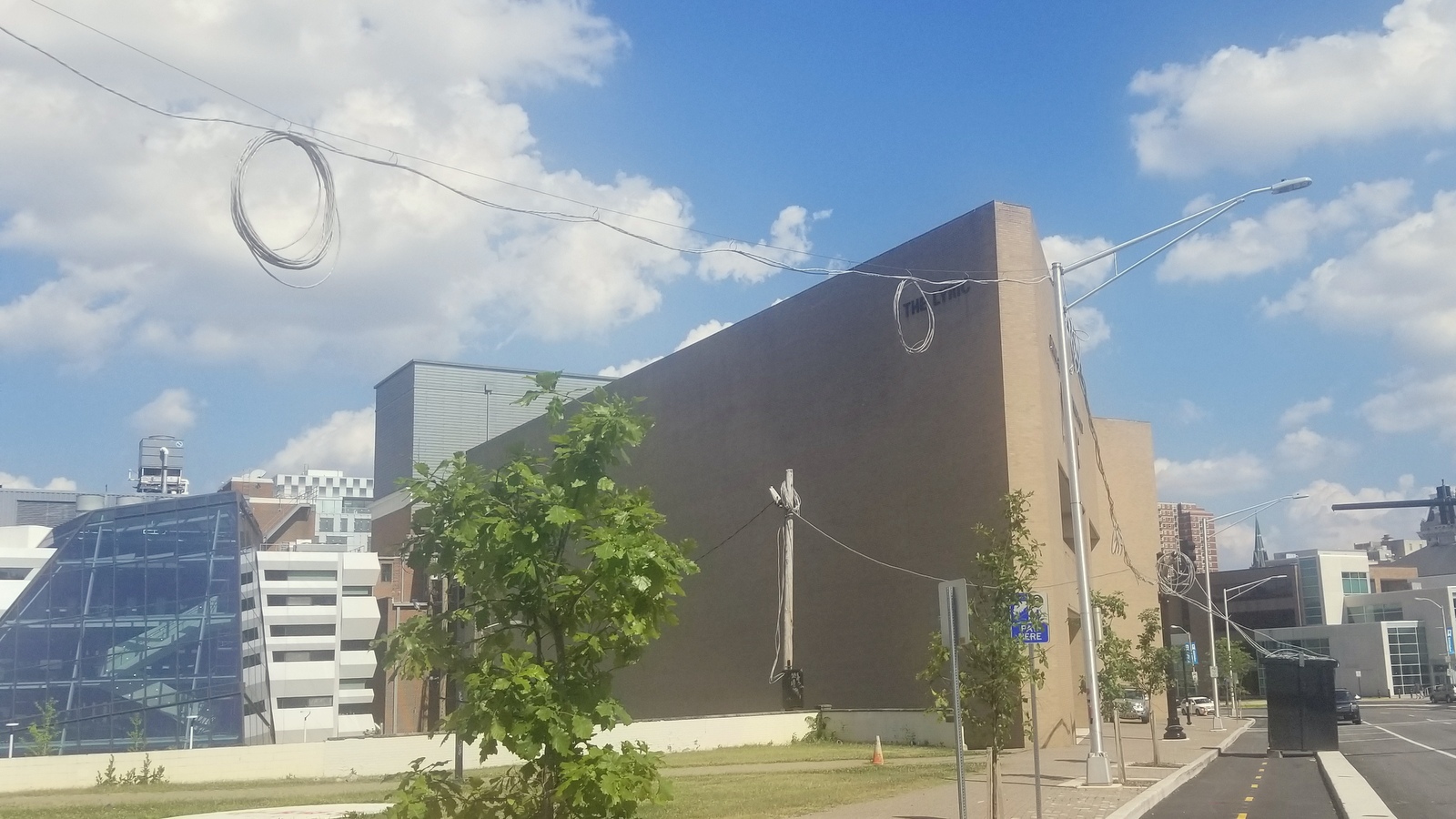 How do you know Artscape time has rolled around again? Those looped lines that look like concertina wire appear overhead. (Ed Gunts)

Reached this week by phone, Rittelmann said the bike lane is the main reason for a series of changes at Artscape this year.

“There’s not enough room for the food trucks and the vendors’ tents,” she said. “We were told that the reason they moved it south of the light rail line was because of the bike lane and the fact that they couldn’t use the east side” of the street.

She noted that burying the cables needed for Artscape was “one of the selling points of redoing Mount Royal.”

There was a more upbeat description of the change in a press release from the Baltimore Office of Promotion and the Arts (BOPA), the quasi-public agency that produces Artscape.

“Artscape features a new footprint in which Mount Royal Avenue remains open to vehicular traffic north of the MDOT MTA Light RailLink tracks,” it said. “Artscape has been a proud part of the Midtown community since 1982, and as the neighborhood changes, the festival changes with it.” 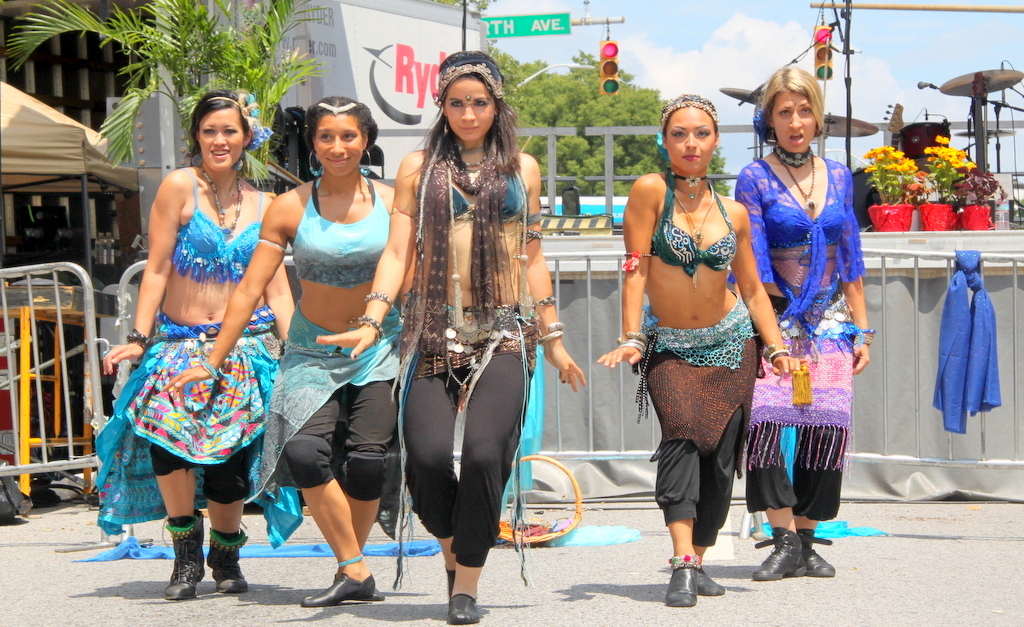 Speaking with The Brew, BOPA spokesperson Tracy Baskerville said the cycle track was one reason the festival’s footprint was changed for 2019. She said another reason is that several MICA buildings will not be used this year, including the Fox Building, the Brown Center and MICA’s historic Main Building.

The Janet & Walter Sondheim Artscape Prize semifinalists exhibit, usually held in the Fox Building, has been moved to One Charles Center at Charles and Fayette streets, starting July 18 and running until mid-August.

Baskerville said the buildings aren’t being used at the request of the college. But Debra Rubino, MICA’s vice president of strategic communications, said that was news to her.

“MICA has always been a proud participant in Artscape and a strong supporter. This was not our decision at all.”

Rubino said MICA has always welcomed the chance to participate in Artscape and show off its campus and the work of its students, faculty and graduates.

She said she thought BOPA didn’t want to use the MICA buildings because organizers “wanted to do something different after all these years and extend it farther down.”

Artscape has “always been here,” she said of the Mount Royal area. “MICA has always been a proud participant in Artscape and a strong supporter. This was not our decision at all.”

Others have suggested that part of MICA’s campus may be off limits this summer due to renovation work underway on the Fox and Bunting buildings and some construction staging on the plaza outside. But Rubino said in an email Friday that she did not believe that was the case, except for the Fox Building.

Rubino was asked if the buildings are closed due to renovation work and if that is the reason they will be closed to Artscape.

“I don’t believe so—although certainly you are right that Fox Building is unavailable throughout the summer,” she said.

Some other changes this year:

Gamescape (a hub for gamers) will be located at the Motor House on North Avenue. Teenscape (featuring programming by teens, for teens) will be in a new location at 1915 Maryland Avenue.

Also part of this year’s Artscape scene will be Red Emma’s Bookstore Coffeehouse at its new location at 1225 Cathedral Street, next to the Joseph Meyerhoff Symphony Hall.

She said tents were lined along the west side of Mount Royal and the east side with the bike lane was reserved for pedicabs. But this year, she said, planners opted to relocate the tents entirely.

The Artists’ Market previously along Mount Royal will now be on the Charles Street bridge over the Jones Falls Expressway, a more centralized location for that feature of the festival.

The performance stage previously in the middle of Mount Royal Avenue near Lafayette Avenue will now be on Charles Street near Preston Street, where a smaller performing area has been in the past.

The project that prompted much of this rearranging is known as the Midtown Streetscape/Traffic Improvements Project.

It was launched more than five years ago to improve Mount Royal Avenue from Guilford Avenue to North Avenue, primarily using federal funds.

The budget for the stretch between St. Paul and Lanvale streets was $7.66 million, according to DOT, the lead agency behind the effort.

Last week, the Board of Estimates approved an EWO (extra work order) of $104,417 “as a result of the revision in the traffic size poles, arm lengths and bolt circle patterns.” The award was made to paving contractor P. Flanigan & Sons.

DOT: Some answers unavailable “because our [computer] system is currently down.”

Why, The Brew asked DOT, was the bike lane built in a way that prevented Artscape from functioning as it had in the past, especially when the conduit and power lines were buried to benefit the event?

DOT spokesman German Vigil said the files on the project were unavailable due to the computer shutdown by ransomware hackers.

“We are unable to provide you with the exact information you are requesting,” he wrote. “Our system is currently down and we are in the process of restoring access to all of our engineers.”

He also did not provide a breakdown for what it cost to bury the conduit for Artscape.

How could a bike lane on Mount Royal have been better designed?

Bikemore’s Weeks said his group had offered several ideas, including creating a “raised cycle track” that was part of the sidewalk along Mount Royal instead of the street surface and creating a cycle track that was separated from cars by “flex posts” that could be removed during Artscape.

He said Bikemore also suggested that DOT study the idea of putting Mount Royal on a “road diet” and have just one lane of vehicular traffic going northbound and one lane going southbound, leaving room for bike lanes on both the east and west sides of the street.

“They ignored every single recommendation we made.”

Weeks said DOT planners agreed to take Bikemore’s ideas into consideration and promised to conduct a road diet study. But shortly after making that agreement, he said, DOT began construction based on the plans it had.

“They just didn’t do it. We were promised that all of these things would be addressed. Then one day they just broke their promises and said we’re not doing any of your suggestions. They ignored every single recommendation we made.”

Weeks said his understanding of the Midtown project is that its original goal was to make the Mount Royal corridor look better and work better for Artscape and others, mainly through sidewalk upgrades and street repaving. A cycle track wasn’t part of its scope.

“There were no bike facilities whatsoever” in the initial plan, he said. “It wasn’t about a bike lane. It was about burying the conduit for Artscape.”

In fact, Weeks said, Bikemore was started as an organization largely because of the Midtown project and the need for better planning of streetscape improvements in areas such as the Mount Royal corridor.

From Nowhere to Nowhere

Weeks said the raised concrete bike lane buffer that interferes with Artscape is just one problem he sees with the changes implemented by DOT. 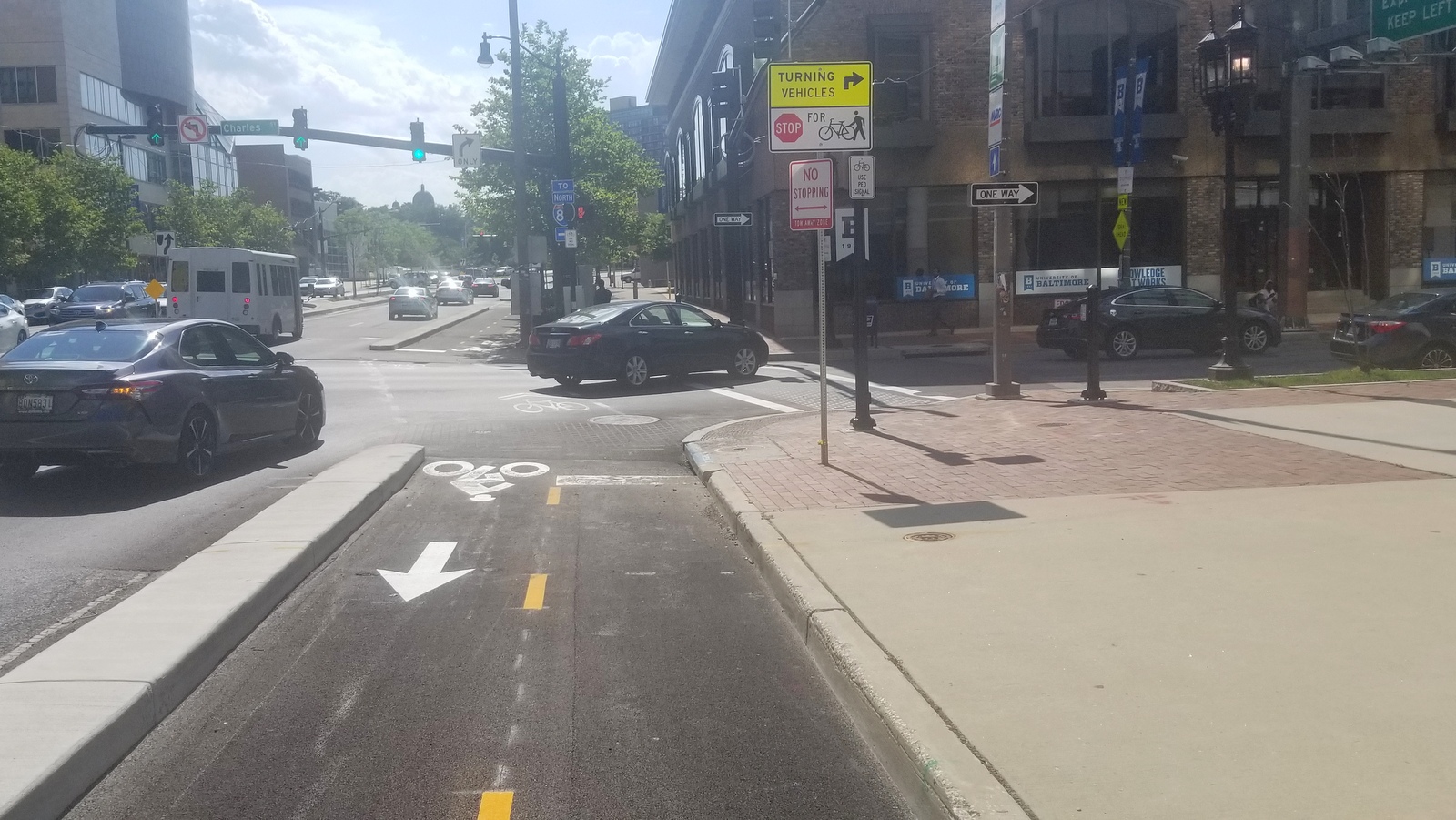 But the biggest flaw, according to Weeks, is that the Mount Royal bike lane isn’t connected to a larger network of cycle tracks.

As a result, bicyclists who reach either end of the protected path are effectively “dumped” into vehicular traffic without any further protection or warning.

“The bike lane sort of starts nowhere and ends nowhere,” he said. “It just doesn’t help anyone.” 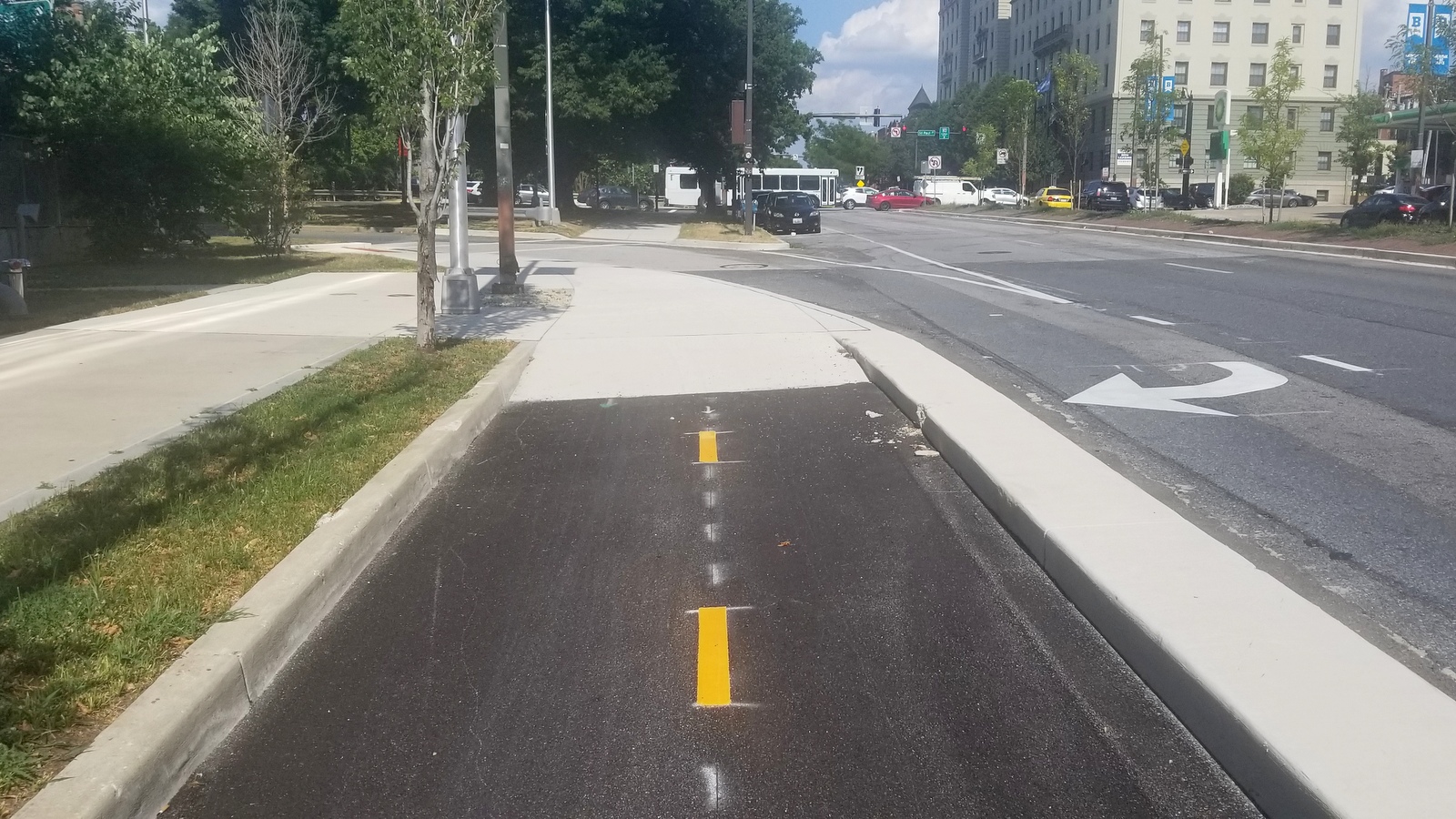 Mount Royal Avenue  between Charles and St. Paul streets, one of the places where the bike lane simply ends – not connecting to other bike infrastructure. (Ed Gunts)