Many Baltimore students have experienced various traumas from gun violence to homelessness to losing a loved one, leading to prolonged mental and emotional health problems.

Bryonna Harris, who is about to enter her senior year at Frederick Douglass High School, has channeled her personal grief by helping City Councilman Zeke Cohen draft legislation to improve trauma care for young people.

“Our city is hurting, but we are doing things like this bill trying to decrease what kids in particular have to go through,” Harris said, describing the bill as a way to improve social and psychiatric services delivered to children and young adults. 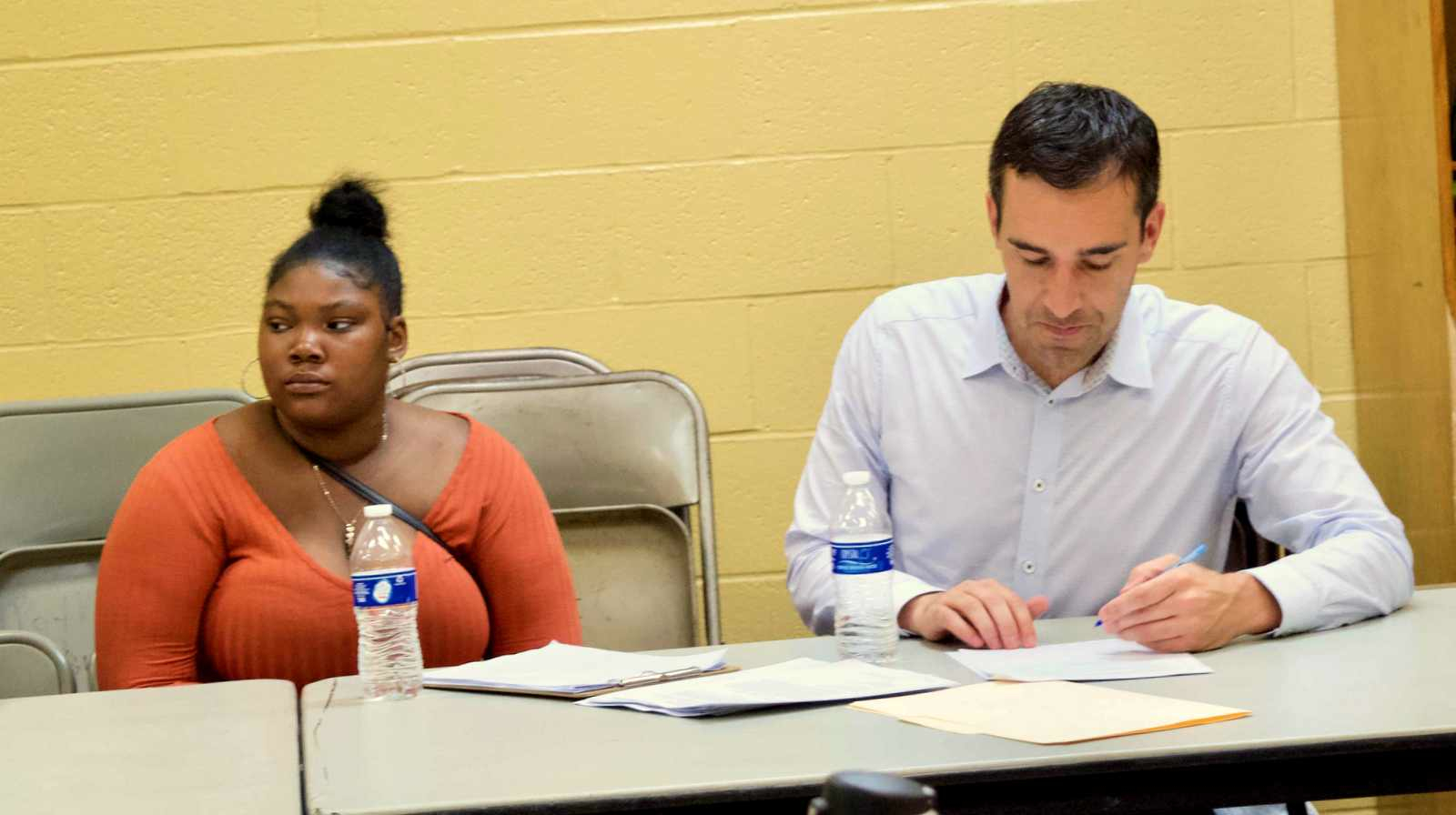 Byronna Harris says the counseling done after the shooting at Frederick Douglass High School was of minimal value. To her left is Councilman Zeke Cohen. (Lizzie Kane)

In a city where drugs can grab whole neighborhoods and bullets may fly out of nowhere, Harris knows the wrenching feeling of helplessness and despair.

Eleven years ago, her brother was killed before she was old enough to even know him.

Fast forward to 2015, and her dad started using drugs and was in and out of prison. Her brothers turned to the streets as well. Last August, her father died.

“I just didn’t know who I was anymore. I started falling apart, literally,” Harris said.

“I had to find a way to turn that trauma into something positive,” describing how the eruption of gunfire, which left a special education assistant at her school seriously wounded last February, was the last straw.

A teacher told her that government officials don’t listen to adults like himself, but they might just pay attention to young people.

Inspired by the teacher’s words, Harris and two other students testified in front of Cohen’s Education and Youth Committee.

A task force would be established by the bill, comprised of four young people along with school parents, community leaders, a clinician, a medical researcher and others.

Meeting at least six times a year, the group is expected to prepare an annual report assessing how well city agencies, ranging from Homeless Services to Public Works and Law, are undergoing “an organizational culture shift into a trauma-responsive city government.”

The Mayor’s Office of Children and Family Success would be responsible for identifying and delivering public and private services for young people suffering from anxiety, depression, post-traumatic stress and other disorders.

“We speak the same”

Cohen met with Harris and a few other students last Friday at the Virginia S. Baker Recreation Center in Patterson Park to discuss the bill. One 13-year-old girl named Ava spoke about the value of peer-to-peer mentorship in her life.

She said she was able to connect to a youth worker when she was enrolled at an after-school program at Living Classrooms.

“He comes and he makes us feel better because we speak the same,” she told the group. “It is easier to connect with someone that is your age. Sometimes adults say stuff, and you don’t really understand what they mean.”

Counselors came to her school after the February shooting, but were not of much help because they did not know the school’s culture.

Harris brought up at the session how counselors came to her school after the February shooting, but were not of much help because they did not know the culture of the school. Nor were they given enough time to establish relationships with the students.

Asked how she liked working with Cohen and his committee, Harris said, “There are not many people in the city who are willing to hear us out, but they are.” She said this is especially important to her because she wants to become a lawyer.