Thirteen days ago, President Donald J. Trump brought unwanted attention to Baltimore by denouncing the city as “a disgusting, rat and rodent-infested mess” and chiding its longtime congressman (and outspoken Trump critic) Elijah Cummings for his failure “to clean up this very dangerous & filthy place.”

The Brew waited for the dust to settle before heading to a community far removed from the tweeters and talking heads of Washington to get the residents’ take about trash in the city.

“Sorry, but I think President Trump spoke the truth,” said Diane Ingram, president of Concerned Citizens for a Better Brooklyn. “The truth hurts, I realize that, but if it gets the city’s attention, that is a good thing,” noting that she doesn’t listen to the president otherwise.

Janet Eveland, an attorney and chairperson of the grassroots group Action Baybrook, disagreed with Ingram’s assessment of Trump (“I ignore him. He never says anything intelligent, never”), but not necessarily with his message: “We know we have trash and rats.”

Keisha Allen, president of the Westport Neighborhood Association, pointed out that there were over 200 bags of trash in her neighborhood last week, and all of them were miraculously picked up before the weekend.

“Trump’s rat comments are making the city respond to things faster,” Allen said, while saying she resented the racist subtext of his tweets:

“New York City has far more rats than Baltimore City, and Trump didn’t say that. There’s an assumption that black people live in this city and don’t take care of where they live.” 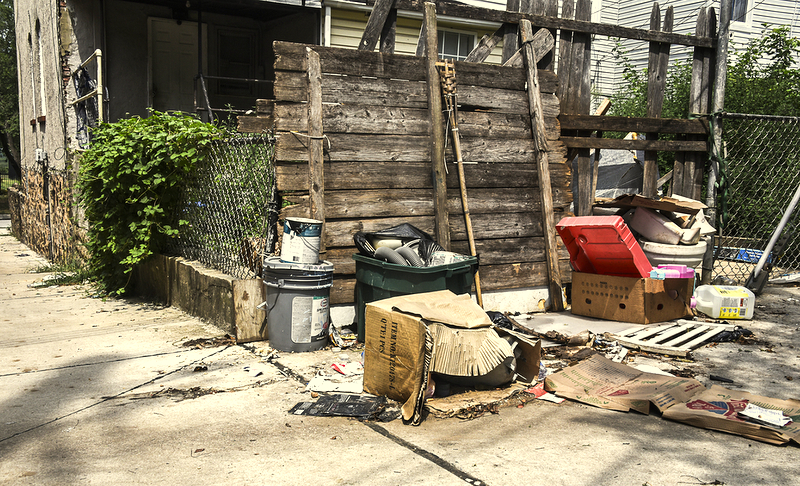 While Trump’s harsh rhetoric was condemned by Mayor Bernard C. “Jack” Young and and many residents, Baltimore does indeed have a lot of trash-filled alleys and streets.

Ingram and Eveland took The Brew on a walking tour of Brooklyn on Monday, accompanied by Andrea Mayer, treasurer of CCBB and owner of a printing company on East Patapsco Avenue, and Jaymie Gange, who works at the print shop.

Brooklyn is a community of 10,000 people less than 15 minutes from downtown Baltimore by car. But a lot of its residents don’t have cars.

Located on the “wrong side” of the Middle Branch (as opposed to Port Covington and Riverside on the north shore) and surrounded by chemical plants and other port industries, Brooklyn has the feel of a small town struggling to make ends meet. 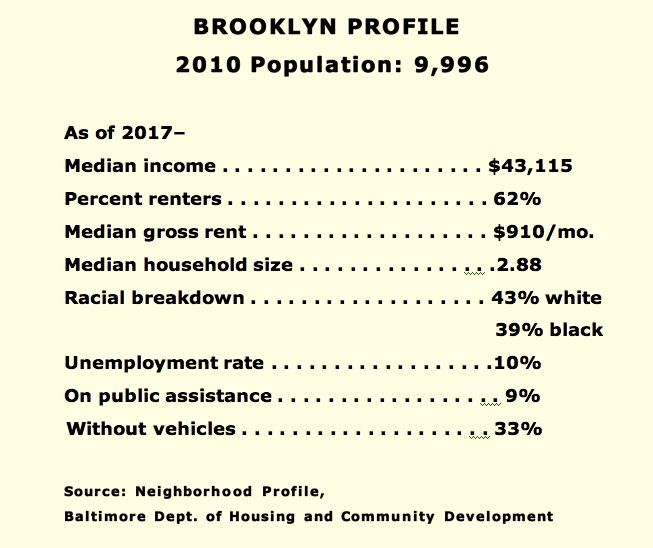 The first stop of our tour was an alley next to the print shop. “Don’t trash here” was scrawled on the side of a house that flanked the alley.

Next to the sign, a bulk trash crew from the Department of Public Works was hauling away chairs and other cast-away furniture.

Left behind when the workers departed were a shattered mirror and a large plastic toy car for children. The plastic car, the women said, has been lying in the street for a better part of a year.

Walking down the alleyway, they pointed to a couch, TV set, chest of drawers and other household items piled up from what they thought was a recent eviction. 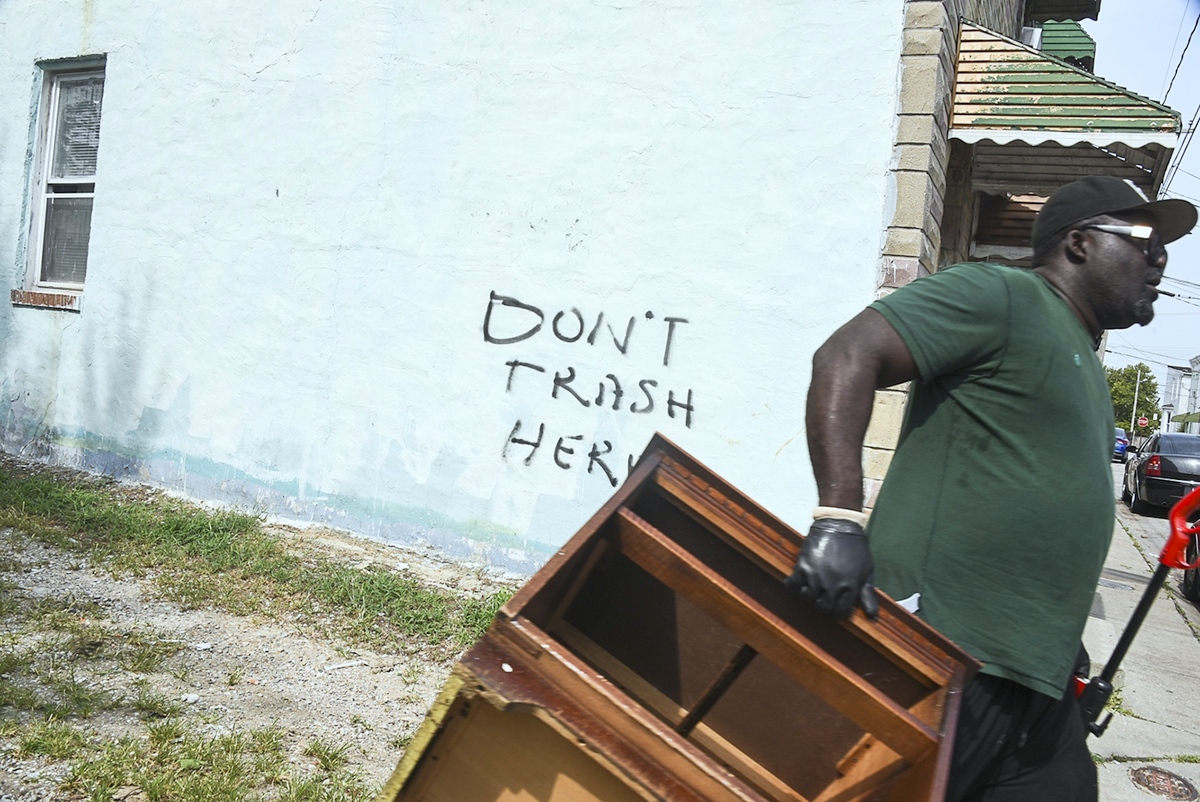 A DPW employee collects bulk trash thrown next to a scrawled no dumping sign. (J.M. Giordano)

Gange said she has watched a landlord dump furniture out of his pickup truck and then drive off. “Or they will put it into their house, and the sister will sneak it out with her boyfriend and bring it down to the alley.”

“Sometimes the garbage truck can’t go down the alley because it is too full of trash.”

On many days, there is considerably more trash in the alley, often blocking a resident from using the back gate.

“Honestly, right now, this looks good,” Mayer said. Her words were followed by a chorus of “fantastic,” “this looks great” and “usually it is four feet high and smells worse” from the other women.

“And sometimes,” Eveland reminded them, “the garbage truck can’t go down the alley because it is too full of trash.”

Raymond Davis, a 12-year Brooklyn resident who lives nearby, agreed that dumping is a constant problem.

“Firemen can’t get through. It aggravates the shit out of me,” he exclaimed. “I work in real estate, and we don’t dump it and leave it.” 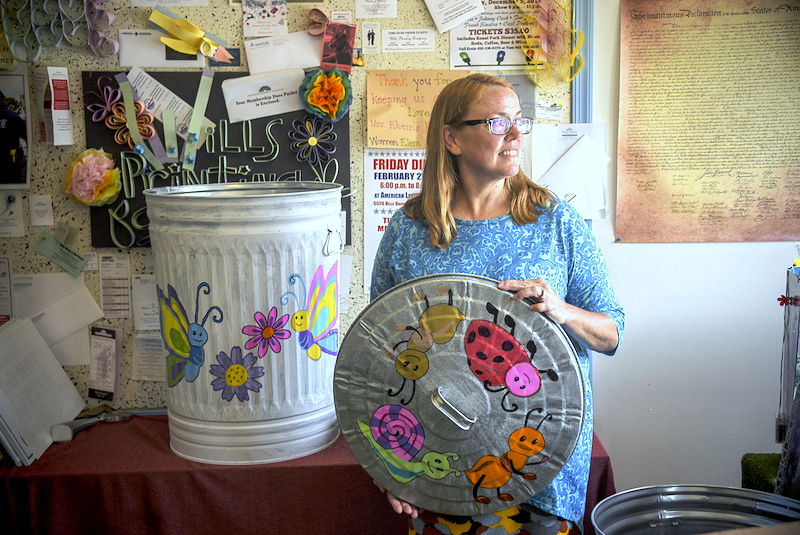 Flower Pots on the Stoop

Gange lives nearby in a house with her grandchildren, ages ranging from two to 13. She says she had to put flower pots on her front stoop to keep people from sitting there and throwing trash, including used needles.

“Every week I’ll come out and pick the trash up on trash day. An hour later, it doesn’t look like I did a thing,” she said, shaking her head.

Around 30 people volunteered at the most recent Brooklyn trash pick-up. They filled up a dump truck five times.

Eveland pointed out a car repair shop, on the 3500 block of South Hanover Street, with trash strewn about the rear of the building and provided this narrative:

“Call 311, call 311, and the inspector came and writes a violation note. The Department of Public Works was supposed to come clean it up and bill the owner for it. The inspector did that 10 months ago. Our city councilman says, ‘They are working on it.’ Well, they aren’t because there is more and more trash.” 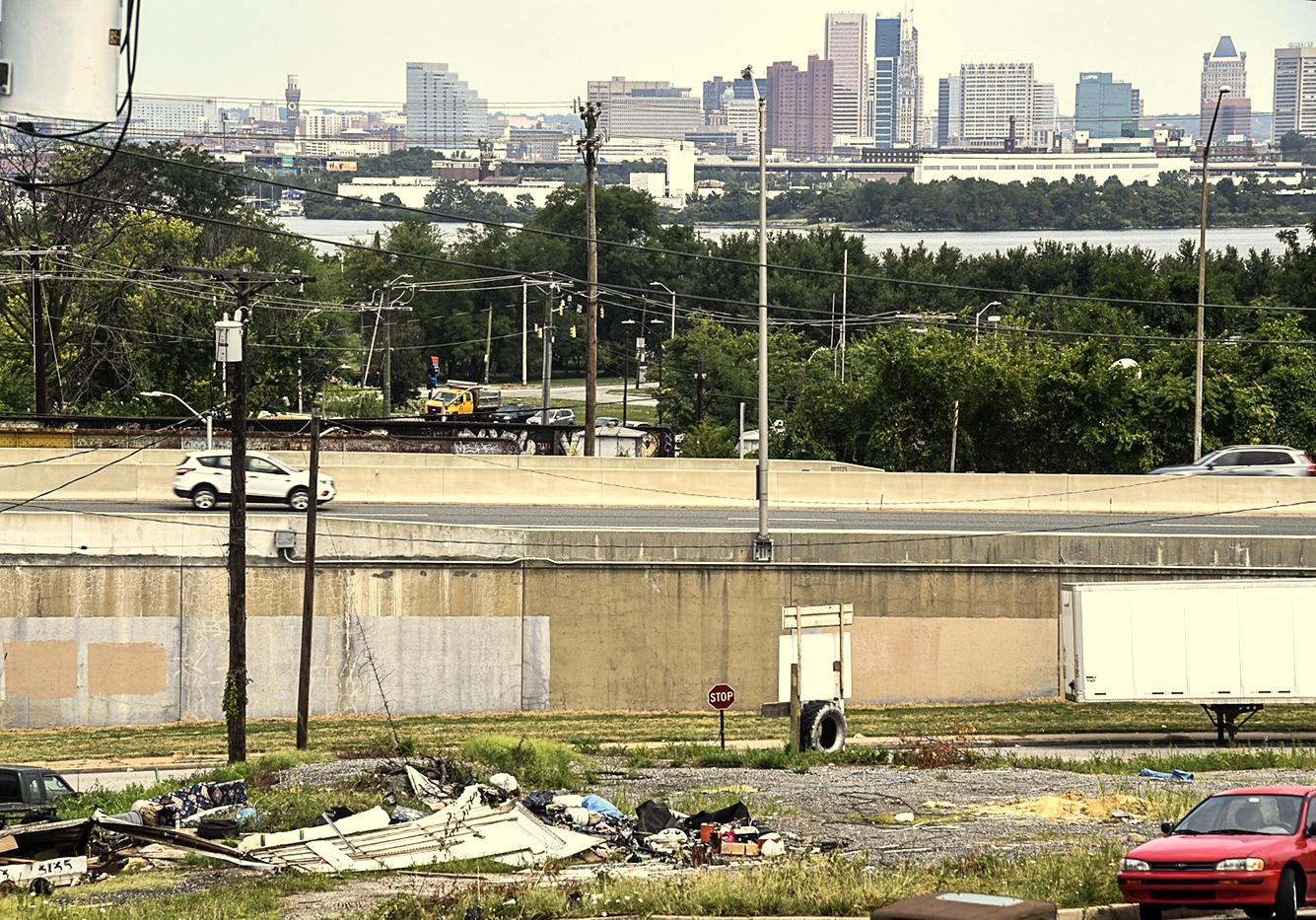 With Baltimore’s skyscapers in the background, an illegal “junkyard” on the border of Brooklyn. (J.M. Giordano)

Supervisors Sitting in a Car

Delmer Taylor recently moved to Brooklyn due to its cheaper living costs. He has firsthand knowledge of the trash problem because he cleans the neighborhood’s biggest recreation space, Garrett Park.

“The city isn’t doing enough. I call 311 all the time, and I get no response,” Taylor said. “I see the supervisors sitting in a car and not doing anything. I called in sewage six months ago several times. I still haven’t heard back. The whole system is broken.”

In nearby Westport, Keisha Allen has also witnessed the issue of littering and illegal dumping many times over.

“The problem is very broad, a web of possibilities in how it happens,” she said. “Overall, citizens in the city want to live in clean neighborhoods free of trash, with neighbors who aren’t just dumping their trash out front.”

While there are cases of families who don’t have trash cans and simply dump debris wherever it’s convenient, other problems stem from “illegal hauling companies, contractors and property investors who are gutting properties and dumping paint cans and junk in alleys and empty lots, making it look like residents are doing it,” she said.

“Citizens in the city want to live in clean neighborhoods free of trash.”

One way the city could help with the rat problem, Mayer pointed out, was to make sure the liners in trash cans aren’t too small. When that happens, food thrown can end up exposed between the cage and the liner. That encourages rats to scrounge around.

Mayer met with a DPW supervisor about trash liner sizes last February, but the problem, she said, persists. 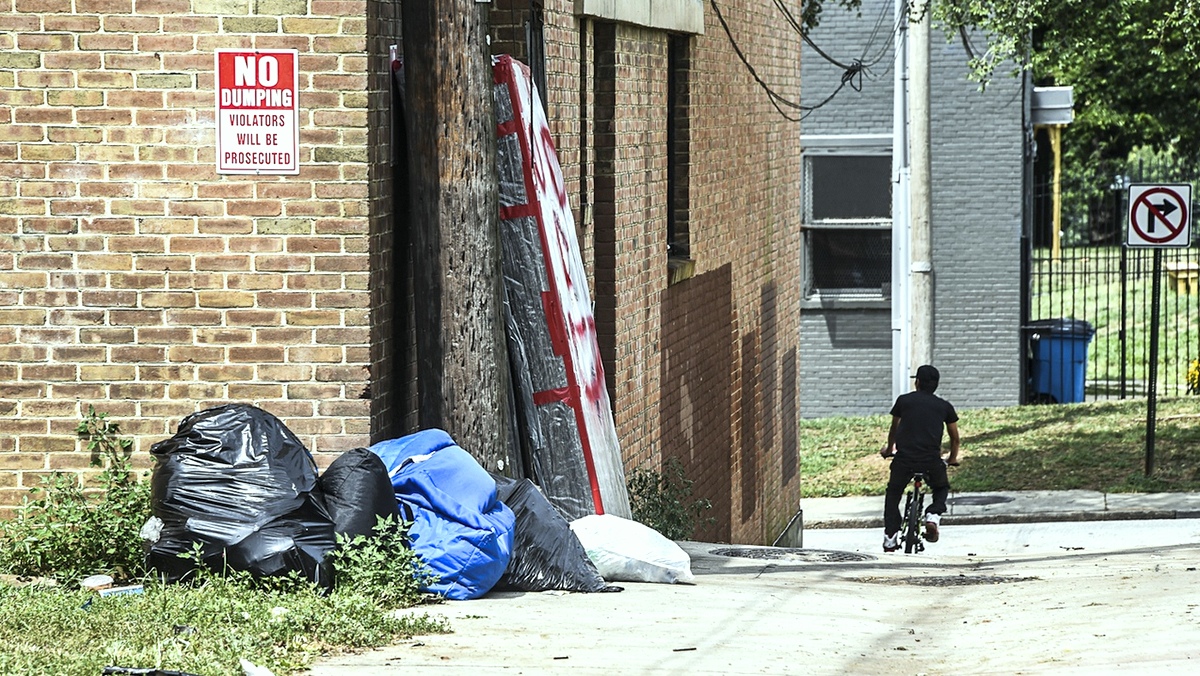 A teenager bikes past a discarded mattress and garbage behind the Enoch Pratt Library’s Brooklyn Branch. (J.M. Giordano)

DPW estimates that 10,000 tons of trash are illegally dumped in Baltimore every year.

Asked how much of this trash is removed, DPW spokesman Jeffrey Raymond said, “We have a backlog that extends for weeks. While we’re picking up trash, people dump more.”

The DPW crew did not pick up the shattered mirror and kids’ toy car, Raymond explained, because all items must be tagged for pick-up.

What’s more, the agency’s “Bulk Trash” webpage says that residents can call to have three items taken and disposed of by the department one day per month.

That’s three items and no more – a policy Mayer says make no sense if the city wants to clean up its neighborhoods.

“The way things are structured is bizarre beyond belief.”

That glass mirror, she points out, “is outside, it’s got broken glass, it’s a hazard.” City crews, she believes, “don’t make the best use of their time. I don’t know if they have enough people in that line of work, but the way things are structured is bizarre beyond belief.”

Regarding code enforcement, the Department of Housing and Community Development handed out 1,148 citations for illegal dumping activities last year. Fines range from $50-$30,000 and have resulted in imprisonment in a few cases.

Jason Hessler, deputy commissioner of permits and litigation, said the agency files about 30 criminal cases a year against illegal dumpers, who are typically “caught” on 80 cameras installed around the city. The department further issues about 22,000 trash-related citations a year.

The Code Enforcement office has 11 people, but only four or five of them are in the field to check the cameras and handle service requests because “they do a lot of other work as well,” Hessler said.

Mayor Young, he added, is very dedicated to resolving the trash issue and conducts “crime and grime” walks through different neighborhoods once a week. 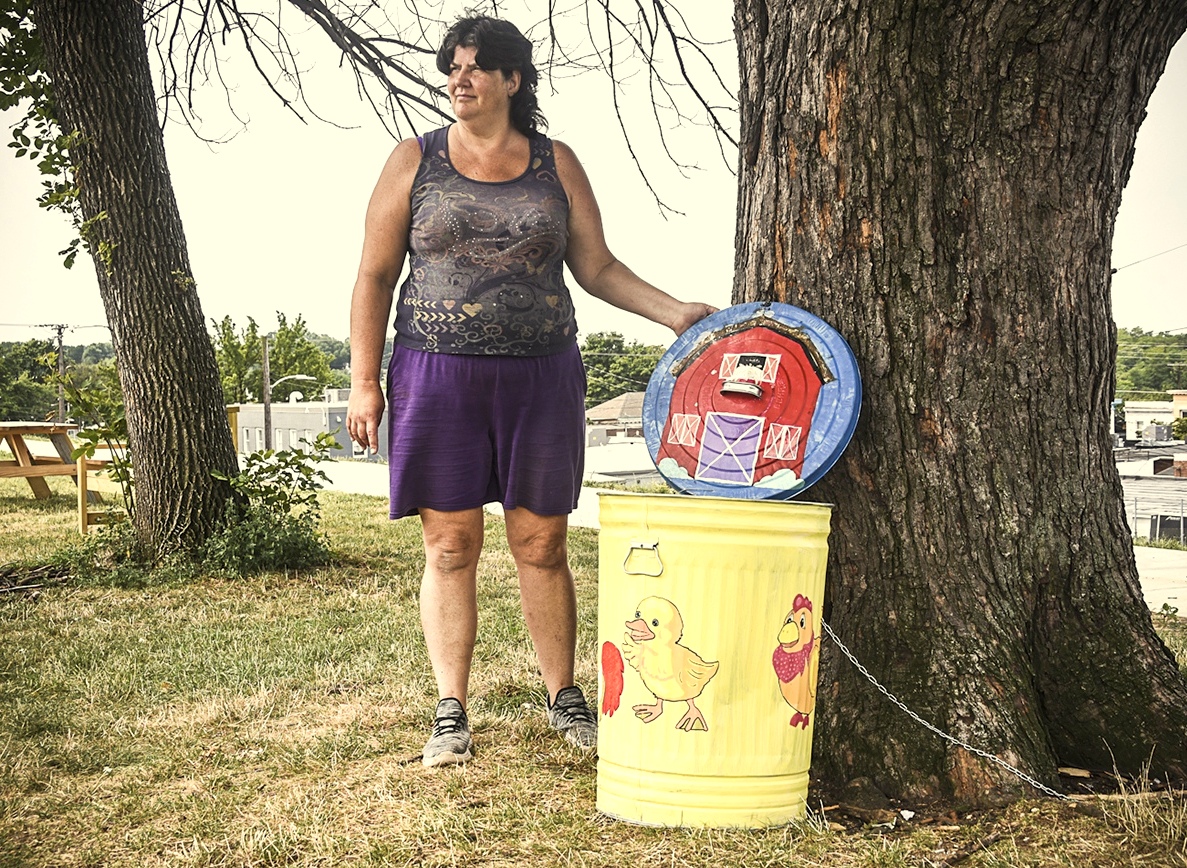 Jaymie Gange with one of the painted trash cans in Garrett Park. (J.M. Giordano)

While Baltimore does have a lot of trash, it also has people willing and able to make the city cleaner.

For example, Concerned Citizens for a Better Brooklyn received a $1,500 “Love Your Block” grant from BMORE Beautiful for new trash cans. Painted in vibrant colors with fun themes, the cans have been placed throughout the park and elsewhere.

The Baltimore Community ToolBank has clean-up items that citizens can borrow, including trash pickers, buckets, brooms and dustpans.

With these items, Brooklyn recently had a community trash pick-up with the help of DPW and the local nonprofit, City of Refuge. Around 30 people volunteered, and the city gave them a dump truck that they filled five times.

“City of Refuge opened a community garden there. That alley is still good four months later.”

Eveland told a story about a woman who threw her trash over the fence while the volunteers were working. The trash-thrower told them, “I just can’t get my sons to deal with the trash properly” and started complaining about the rats.

At first ignorant to the fact that she was exacerbating the rat infestation, she eventually came out to help clean up with her son.

“The woman said they are going to look for illegal dumping now,” Eveland said. “We ultimately got the city to clean out the backyard, and City of Refuge opened a community garden there. That alley is still good four months later.” 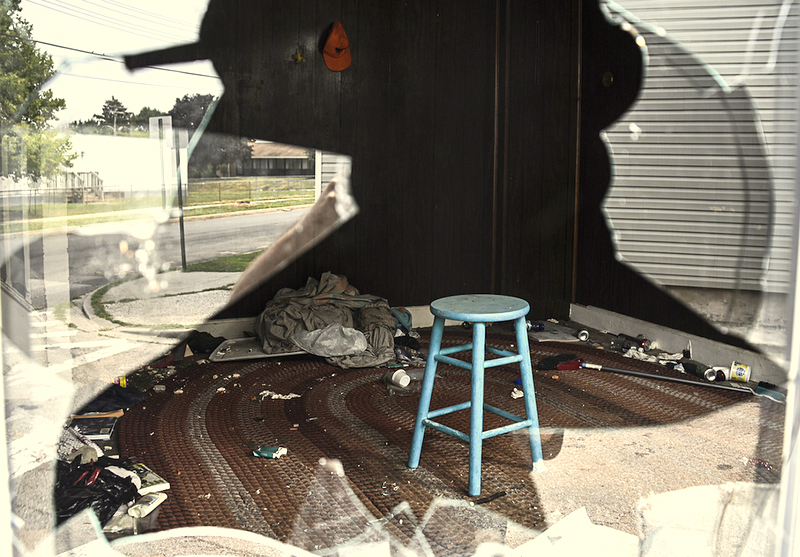 Trash dumped in an abandoned storefront with a smashed window. (J.M. Giordano)

However, community gardens and trash pickers are not enough. “It’s like a third-world country here. No job opportunities,” said Denard, a local resident who asked that his last name not be used.

“If you took all the residents and put us in Beverly Hills and put the people from there here, you’d see LA Fitnesses and Starbucks. . . Pay residents to clean up the trash. A cash incentive would make people keep it clean,” he recommended.

Eveland agreed that the residents of Brooklyn are tired of shouting into a void.

“They have called 311 one hundred times and nothing has happened. So they don’t call anymore.”