A manhole along Herring Run has emerged as the single largest site of “unstructured” sewage pollution in the Baltimore area.

Located about 200 feet upstream from the Belair Road Bridge, the manhole has gushed out 26.5 million gallons of untreated sewage since last December, according to “spill reports” disclosed to the Maryland Department of the Environment (MDE).

That’s by far the biggest overflow of raw sewage from any manhole in the city and is eclipsed only by two “structured” overflow pipes along the Jones Falls that are under a federal consent decree to shut down by 2021.

The latest “blow” took place last Thursday night and Friday morning when 7.8 million gallons of sewage mixed with rainwater rushed out of the manhole – apparently with enough force to send a heavy manhole lid flying.

On Saturday, a reporter viewed telltale signs of the spill along this scenic bend of the stream as it gurgles through a cascade of smoothly cut gneiss boulders.

The lid to the manhole was found a dozen feet downstream wedged against a rock. Reams of plastic bags, soggy paper wipes, smashed parts of aluminum cans, glass and other debris clung to nearby bushes or were embedded among the sand and rocks.

A musty fecal smell enveloped the area, located about 50 feet from the Herring Run Greenway used by joggers and nature walkers. 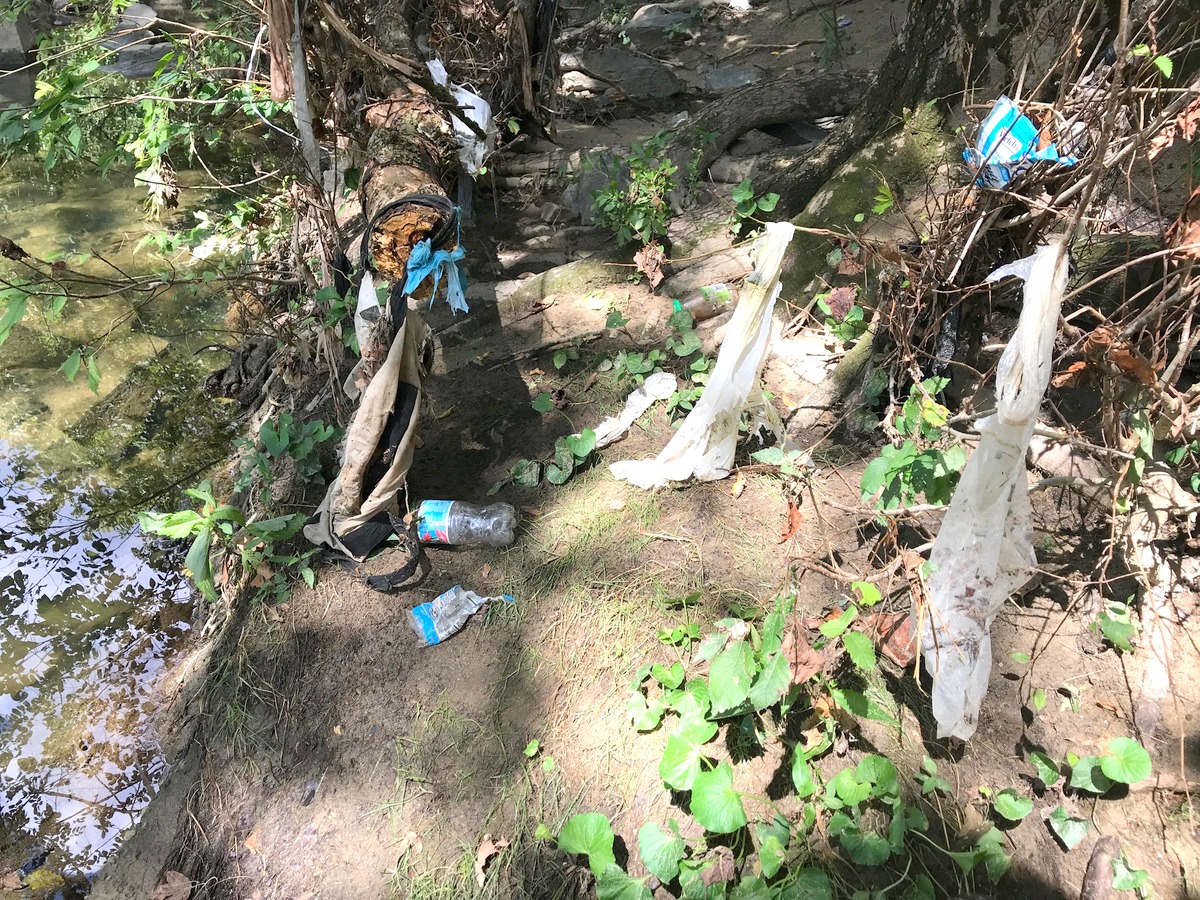 Debris along Herring Run last Saturday, a day after the latest sewer spill on August 22-23. Below: another view of the open manhole and its nearby lid. (Mark Reutter) 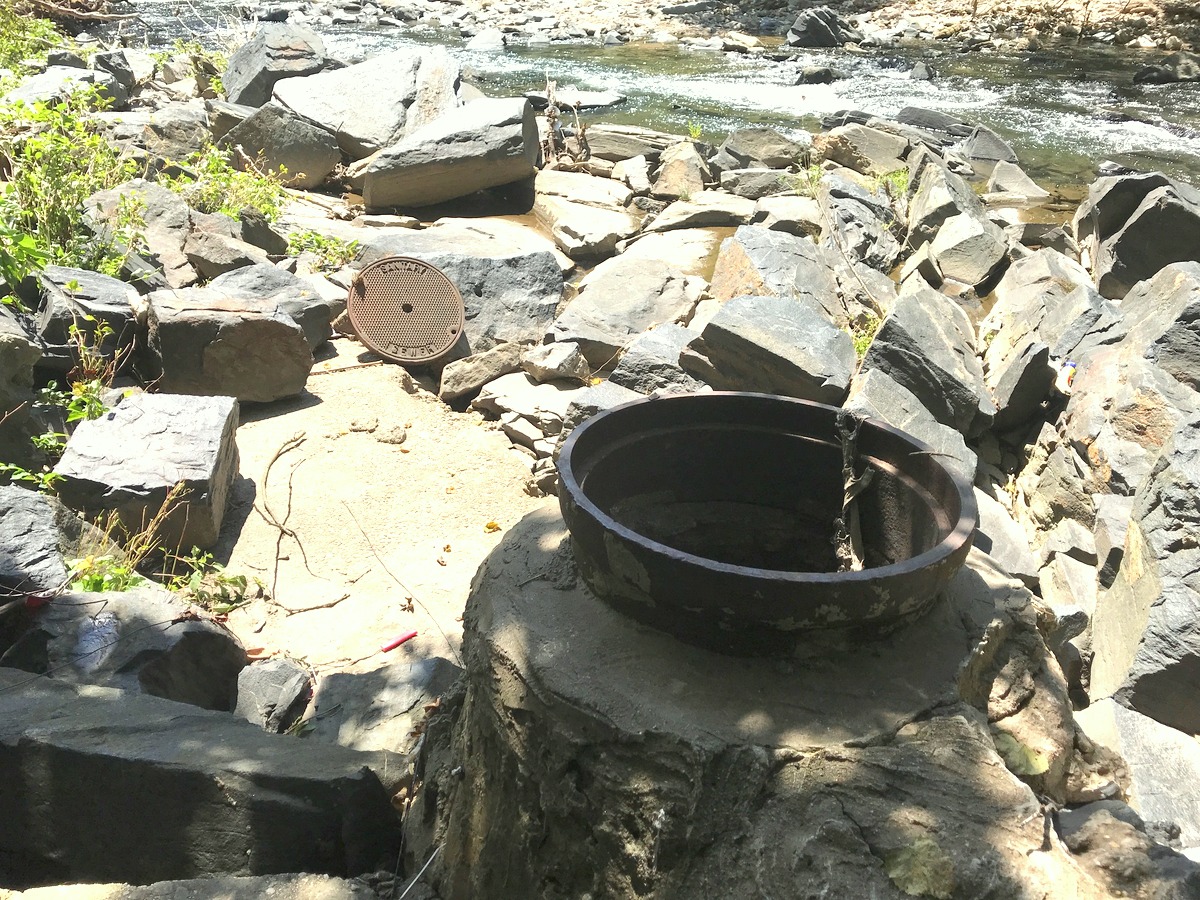 “We call ’em ‘The Volcanoes’ because they blow so often,” says Patty Dowd, coordinator for Friends of Herring Run Parks.

Dowd has monitored the stream for five years. She says she often finds manhole lids lying beside the sewer pipe that parallels Herring Run, carrying sewage from northeast Baltimore County and northern parts of the city to the Back River Wastewater Treatment Plant.

“I’ll report the open manholes to 311,” Dowd says, “and the city will come back and say, ‘We can’t see it.’ I guess if you don’t get out of your truck and look over the side of the bridge, then you don’t see it.”

Yesterday, following Brew inquiries about the spill at Herring Run, Department of Public Works crews rushed to the scene.

By late afternoon, they had retrieved the lid, secured it to the stack and slathered concrete around the upper surface. 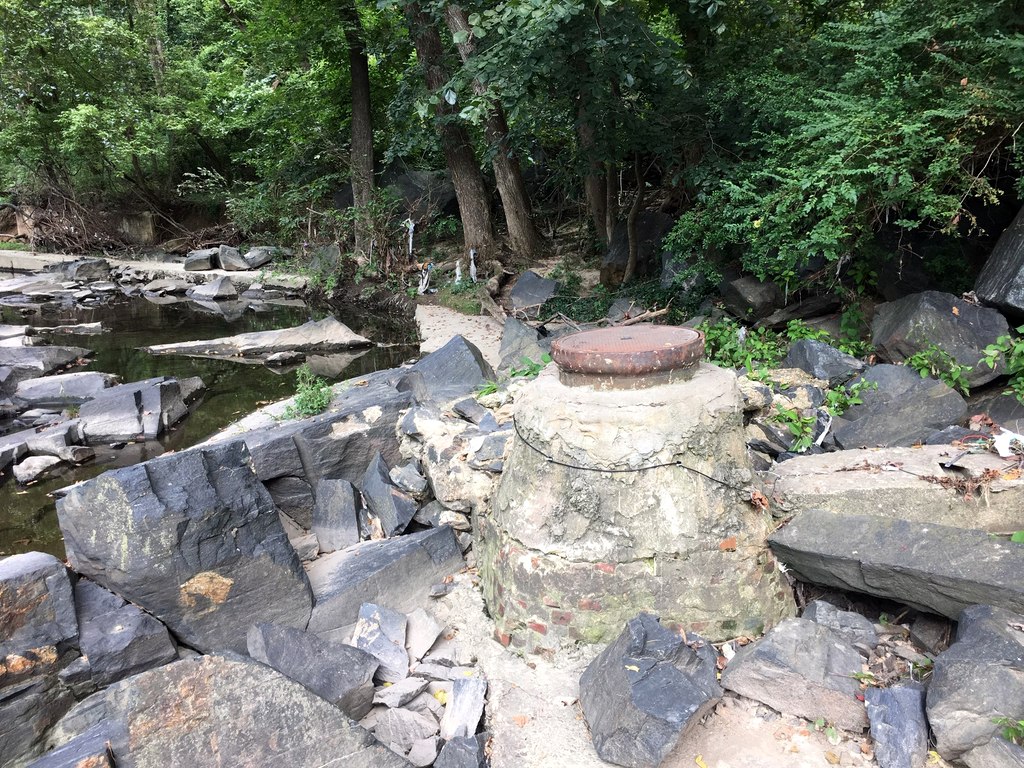 The manhole lid was put back in place on Monday afternoon and the upper stack given a fresh coating of concrete. Note the plastic debris still hanging in the background.

Overflows at 3900 Belair Road are a relatively new phenomenon.

Or more accurately, a phenomenon that began to be recorded when the Department of Public Works installed a flow meter at the manhole last year.

The first “overflow event” recorded by the meter occurred last December 15, when 455,000 gallons of sewage overflowed into Herring Run.

Despite all of the funds spent, DPW acknowledges that the Herring Run sewershed can’t handle wastewater during heavy rainstorms.

Kevin Cleary, vice president of the Friends group, said the site of the spills is a popular gathering place for park activities.

“We frequently use 3900 Belair Road as a meet place to start our bird walks. Tour dem Parks uses the south side of the stream during their annual bike trip as a water stop,” he said.

Kids can often be found wading among the boulders or lounging along a sandy beach just west of the spill site. And two community associations use a nearby shed to show movies during the summer. “That’s the nicely painted building on the south side of the stream,” Cleary said. 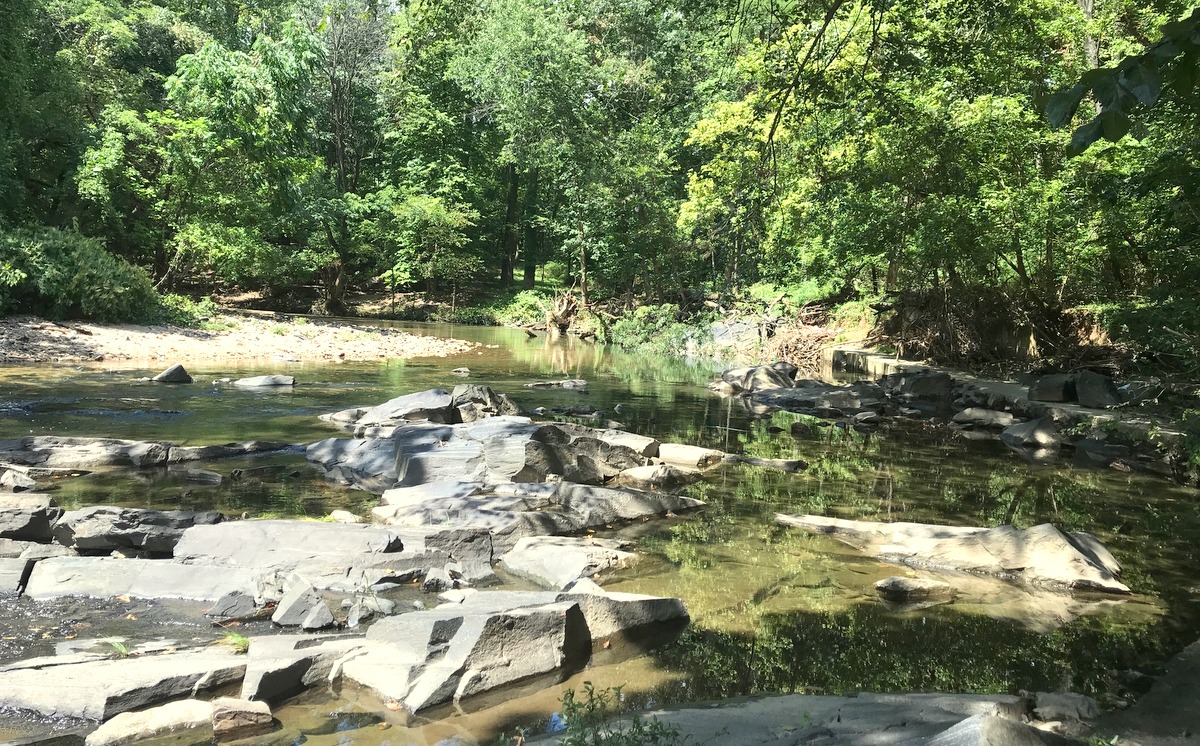 Herring Run makes a graceful curve before it comes to the location of nine major sewage spills since December 2018. (Mark Reutter)

According to DPW spokesman Jeffrey Raymond, the recent overflows at 3900 Belair Road are a result of “wet weather capacity issues.”

Rainwater from summer storms “infiltrate” the city’s maze of old sewers via cracks and holes in the pipes – and, sometimes, malfunctioning storm drains that dump their contents into the sewers.

In places where tree roots obstruct the flow or where hydraulics are poor, the rainwater can overwhelm the capacity of a sewer pipe.

When that happens, the highly-pressurized sewage can break through the pipe and leak into the ground.

Or it can erupt from a manhole – like steam escaping from a boiling kettle – which occurred earlier this month at Lake Roland.

Back in 2002, Baltimore signed a consent decree with state and federal agencies promising to eliminate all SSOs (sanitary sewer overflows) into local waterways, including Herring Run, by 2010.

One of DPW’s earliest determinations was that the 48-inch sewer line along Herring Run, built in 1925, was in serious need of repair.

Since then, fixing manholes, replacing cracked pipes and restoring the stream has cost about $13 million, with construction done by AM-Liner East and design work handled by Whitman, Requardt & Associates.

Another $23 million contract was bid out to Spiniello Companies for improvements to Chinquapin Run, a creek that joins Herring Run north of Morgan State University. That contract calls for replacement of sewer pipes, revegetation of eroded banks and restoration of the streambed.

Faith in the Headworks

Despite all of the funds spent, DPW acknowledges that the Herring Run sewershed can’t handle wastewater during rainstorms like the one last Thursday.

However, the agency “anticipates” that “much of the overflow problem” will be “addressed” by the rebuilding of the headworks, or intake pipes, at the Back River treatment plant, according to Raymond.

The $430 million headworks project, aimed at increasing the facility’s capacity to process sewage, is expected go into operation by the end of 2020.

The question of capacity within the Herring Run sewer line is not expected to be addressed by DPW until sometime after 2022.

The question of capacity within the Herring Run sewer line is not scheduled to be addressed by DPW until Phase 2 of the federal consent decree.

“That [phase] calls for upsizing pipes to further address capacity issues, such as the one at this location,” Raymond said.

Informed of such lengthy time delays, Dowd drew a short breath and said she’ll brace herself for many more “volcanoes” erupting in the future. 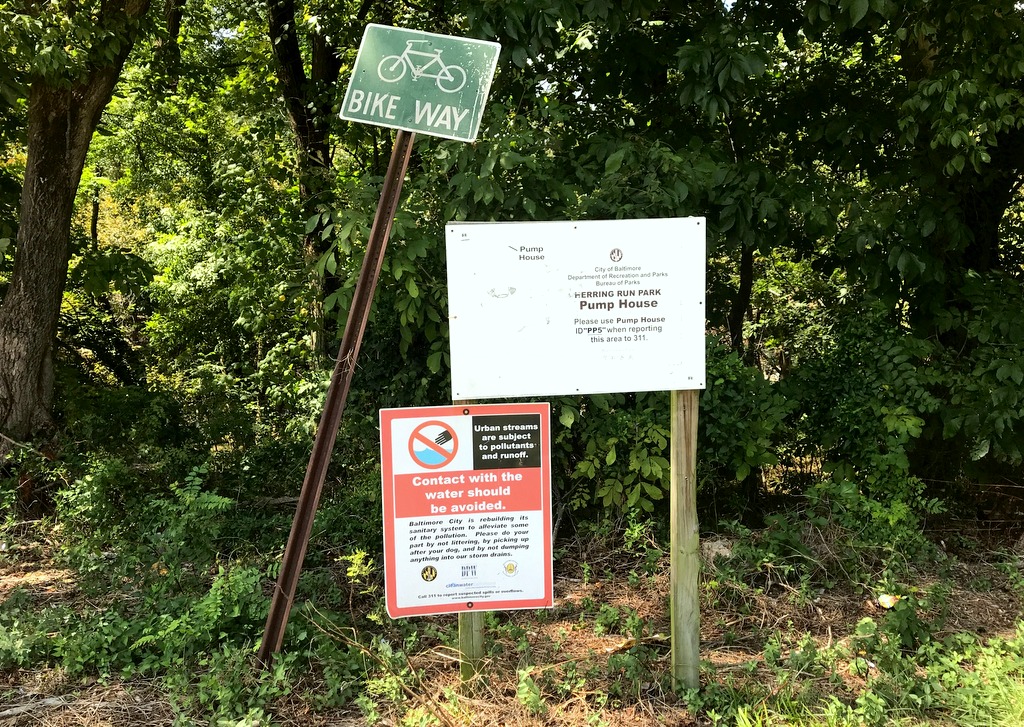 A Health Department sign near the Belair Road Bridge warns of the risks of getting too close to Herring Run. (Mark Reutter)