Social media in Baltimore was ablaze on Monday with rumor, eyewitness accounts and grisly photos: the body of an African-American man had been found that morning hanging at a park across the street from Carver Vocational-Technical School.

At midday, Karsonya “Kaye” Wise Whitehead received a call from a listener asking if she would be discussing the children’s exposure to this disturbing sight on her WEAA afternoon radio talk show.

Looking online for mainstream media verification, Whitehead could not find a word about it on newspaper and television websites.

Finally after calling city school police and getting confirmation that a body had indeed been found hanging at Easterwood Park in West Baltimore, she went with the story.

“The phone lines exploded,” she said. “People started reading out the texts from their children, their nephew, saying that they had seen it” on their way to school.

“This is a story that needs to be told, and yet it seems like it’s being swept under the rug,” Whitehead said. “We say we want to talk about the trauma children experience every day in this city. Well, here it is.”

Asked about the incident, a Baltimore Police spokeswoman verified that there had been a report Monday of a body found in the 1500 block of Bentalou Street and said police believe it was “an apparent suicide.” [UPDATE: Police have identified the person whose body was found there as Thomas Davis, 55.]

But Detective Nicole Monroe responded with heat to the suggestion that children had seen it.

“Some people had started a rumor about that, trying to gin up controversy,” she said. “School police came at 7:03 a.m. and were able to cover it up – the children hadn’t even arrived.”

Pressed, Monroe said she had “no evidence that students saw it.” For details about how the incident had been handled and where the body had been found – accounts variously described it as hanging on a fence or from a basketball rim – she referred The Brew to city schools police chief Akil Hamm.

“I’m not aware of our officers being the first at the scene,” Hamm said when reached today.

“I was made aware of it by the police,” he added, referring a reporter back to the BPD.

Similarly, school officials said in an emailed statement that “questions about the incident and investigation should be directed to the Baltimore Police Department.”

In response to “police activity in the park across the street” from Carver, “school staff and school police were at Carver providing support to students throughout the day,” City Schools spokesperson Arezo Rahmani said. 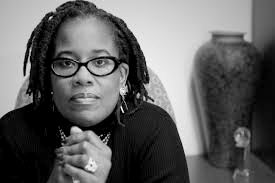 WEAA’s Karsonya “Kaye” Wise Whitehead criticized the official response to the discovery of a man’s body near a Baltimore school. (LinkedIn)

Told that police say no children saw the body, both Whitehead and Marvin L. “Doc” Cheatham had essentially the same response:

“These folks lie rather than admit they dropped the ball,” said Cheatham, president of the Matthew A. Henson Neighborhood Association.

Cheatham said he has spoken with many eyewitnesses, including an across-the-street neighbor who described in detail seeing the uncovered body and children taking cellphone photos of it.

Cheatham said BPD never contacted him or other area neighborhood associations to alert them to what had happened – and, at first, failed to return his phone call.

“It was very disturbing. You’ve got all kinds of rumors, that this was done by gangs, drug dealers, who knows,” Cheatham said. “There should have been communication with us. This was disrespectful.”

Whitehead: “It seems like it’s being swept under the rug.”

He emailed a complaint to BPD yesterday, he said, requesting that Police Commissioner Michael Harrison and the Western District Commander John Webb answer questions about the incident at his group’s next community meeting.

“It was a failure of local media, too,” Cheatham added, noting that he called all the local television stations, who already knew about the incident but hadn’t covered it.

“The police, the fire department, the medical examiner’s office, the media – everyone seemed to know about it except for the communities directly affected by it,” he complained.

While black radio hosts like Larry Young and Clarence Mitchell IV offered people an opportunity to discuss the Carver incident, Cheatham said, it was hard to find acknowledgement of it elsewhere.

Current Baltimore Sun stories on the subject of suicide take other angles, such as an author’s first-person account of her brother’s suicide nearly a decade ago and a piece out of Carroll County noting that Tuesday was “World Suicide Prevention Day.”

Whitehead said she tried to be very careful on her show about separating fact from speculation and not using language irresponsibly.

“I was very wary about people using the word ‘lynching’ and I even read out the definition of it,” she said.

Even so, she said, the disturbing association for African-American adults and children was unavoidable and constituted one more trauma for people in a community that has endured so many.

“I cried on the air the other day,” said Whitehead, recounting how a mother had called in to share how she lost two boys to gun violence. “I’m the mother of two sons. That got to me.”

Asked what the school could have done differently – some callers had argued children should have been dismissed for the day – Whitehead said she was torn.

“The principal could have pulled everyone together and told what was known and given everyone an opportunity to share what they were feeling and process it,” she said.

“And then after 15 or 20 minutes, send them back to class and say counselors are here if you want to talk more about it,” she said.

As a mom, she said she would probably have wanted go to the school and bring her child home.

The school’s response, telling students counselors were available, struck her as “pretty much treating it like business-as-usual.”

Since Monday, there has been some minimal media coverage of the incident, including this from WBFF Fox45 and this from the Afro. The Real News Network’s Taya Graham called the BPD and pointed to the incident on Twitter.

Today a WJZ segment on a missing 50-year-old Windsor Mill woman raised eyebrows by noting that she is a “cousin of the man found dead near Easterwood Park.”

First District Councilman Zeke Cohen said the incident illustrates the need for improving trauma care in the city, the aim of a bill he recently introduced.

“Today a former student called to tell me she saw the aftermath of a suicide that happened a block from her school. She could barely get the words out,” Cohen said on Facebook. “More than passing this law, we need to come together, stand up for each other and heal.”

To Whitehead, what happened represented a breakdown in society’s response to traumatized citizens.

“Even if a child didn’t see this terrible thing, what if they had just lost a family member to violence?” she said.