You’ve seen them in the fall along highways and in empty lots – big bright-red, antler-like projections standing out against palm-frond leaves that also turn crimson as the cooler weather comes on.

Growing sometimes to the size of a small tree, they’re native to the Northeast and southern Canada and, with their big burgundy panicles, quite striking. For years, their foraging potential has intrigued me.

Recently, I found a bush full of the fuzzy, red sumac “cones” on the corner of Preston Street and Guilford Avenue in Mt Vernon. A group of school children waiting for a bus there helped me pick them.

While asking me questions about what it is called and what I was going to make with it, they gently pulled down branches and snapped off the fruit clusters without harming any other part of the plant. 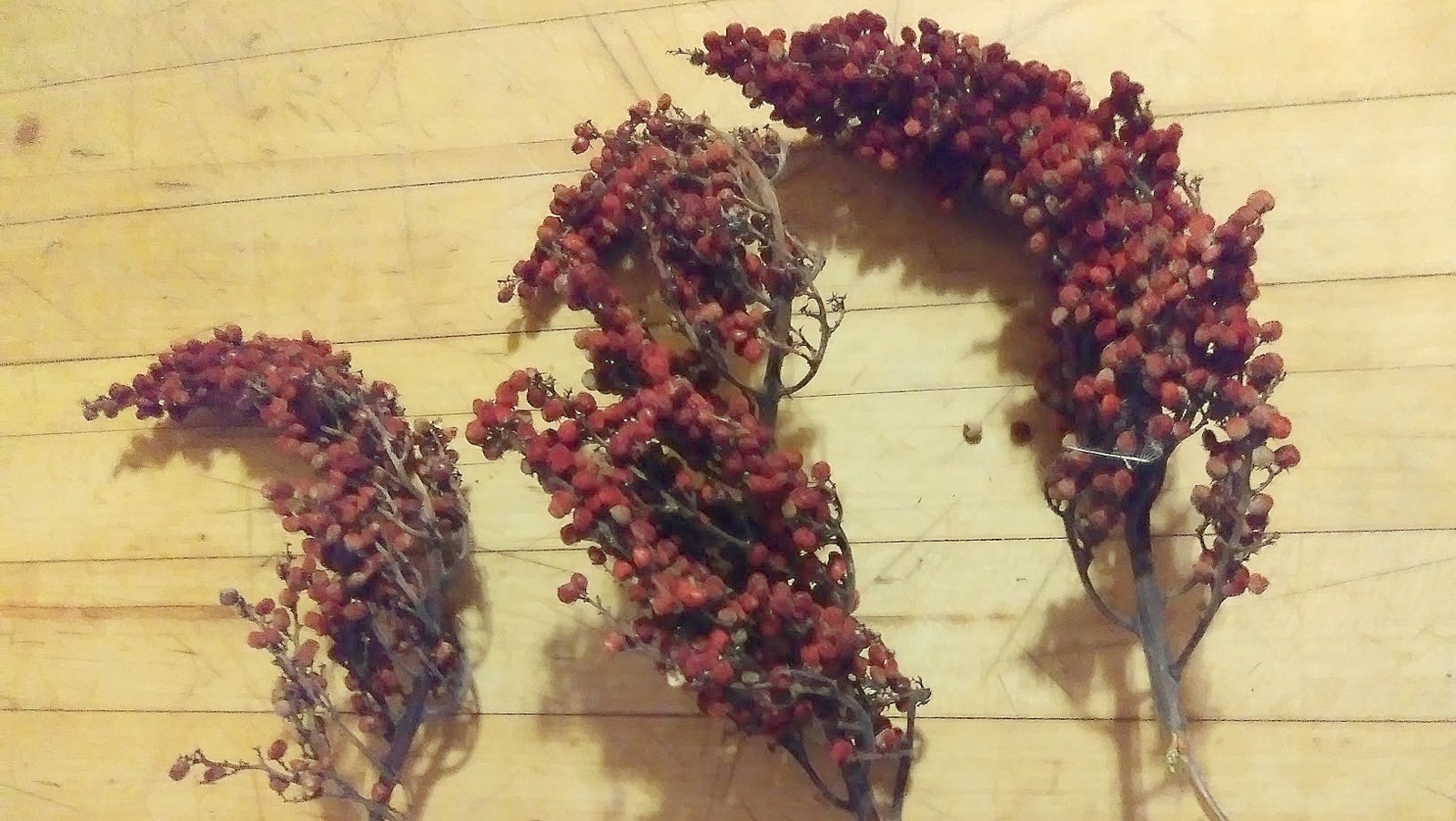 Together we filled half a paper grocery bag – enough to make about a cup of sumac spice – before the bus took them away.

I only had a chance to tell them a bit of the story – that the berries are used in some parts of the world to flavor food and that some Native Americans turned them into a citrus-like beverage known as “Sumac lemonade” or “Indian lemonade.”

Anyway, here is more of what I know about these ubiquitous plants and how you can use them.

First, a warning: we are not talking here about “poison sumac,” whose drooping berries are white and which tends to grow in swampy areas rather than the dry roadsides that Staghorn sumacs favor.

Poison sumac, Toxicodendron vernix or Rhus vernix, causes skin irritation, so avoid it as you would poison ivy.

Now that that’s out of the way: for first-time foragers, sumac berries are the easiest product to start with because “sumac-ade” is the simplest foraged recipe to make. (See step-by-step instructions below.)

With a tartness similar to lemons, though not as sour, it’s also high in vitamins A and C and in antioxidants.

For those up for more of a challenge, you can make your own sumac spice.

Ground, dried sumac berries are a major spice in the cuisines of the Middle East, Turkey, Italy and many countries around the Mediterranean. You’ll find it used, for example, as a spice rub for lamb, fish, and chicken. Or as a topping for fattoush and sprinkled on hummus to add bright color and zesty flavor.

With a tartness similar to lemons, though not as sour, it’s also high in vitamins A and C and in antioxidants. Before lemons came to Europe, Romans used the berries to add some zing to their dishes.

It’s also known as an anti-inflammatory, good for treating coughs, sore throats, and fevers. Its been studied as possibly effective in regulating cholesterol levels.

Some people even keep a jar of sumac spice on their tables for daily seasoning. Once you try it, you’ll understand the appeal of its color, flavor, and food-enhancing function.

Although making sumac spice turned out to be quite labor intensive, the resulting sumac-spice apple tart made it all worth doing.

The spice turned the sugar-butter-almond flour paste a dark pink. The citrus tang amplified the tartness of the apples, and their distinctly woodsy sumac-iness took this apple tart recipe to another level.

Fill a large glass canister with sumac panicles. Add fresh water to the brim. Do not use hot water – it will make it bitter. Put on lid and let sit in the sun for a full day. By the next day the water should turn into a rich golden color and taste citrusy.

Take out the panicles and pour remaining water through cheese cloth to strain out impurities. The resulting beverage can be sweetened to taste with honey, sugar, or other sweetener of your choice.

Serve chilled or over ice in lieu of lemonade.

Fill largest bowl about halfway with fresh water. Submerge a couple of sumac panicles in the water and rub the berries between ones hands and fingers in order to rub off the velvety powder into the water.

As you finish processing each panicle, remove it from water and set it aside to compost. The water should become more and more pink.

Once all the berries have had their red fur rubbed off, then pour water through 2-4 layers of cheesecloth fastened securely with a large rubber band on a large pitcher.

Adjust so a well is formed over the pitcher that is deep enough to catch the strained material. You may need to dump out material as you work through the water and rinse the cloth. 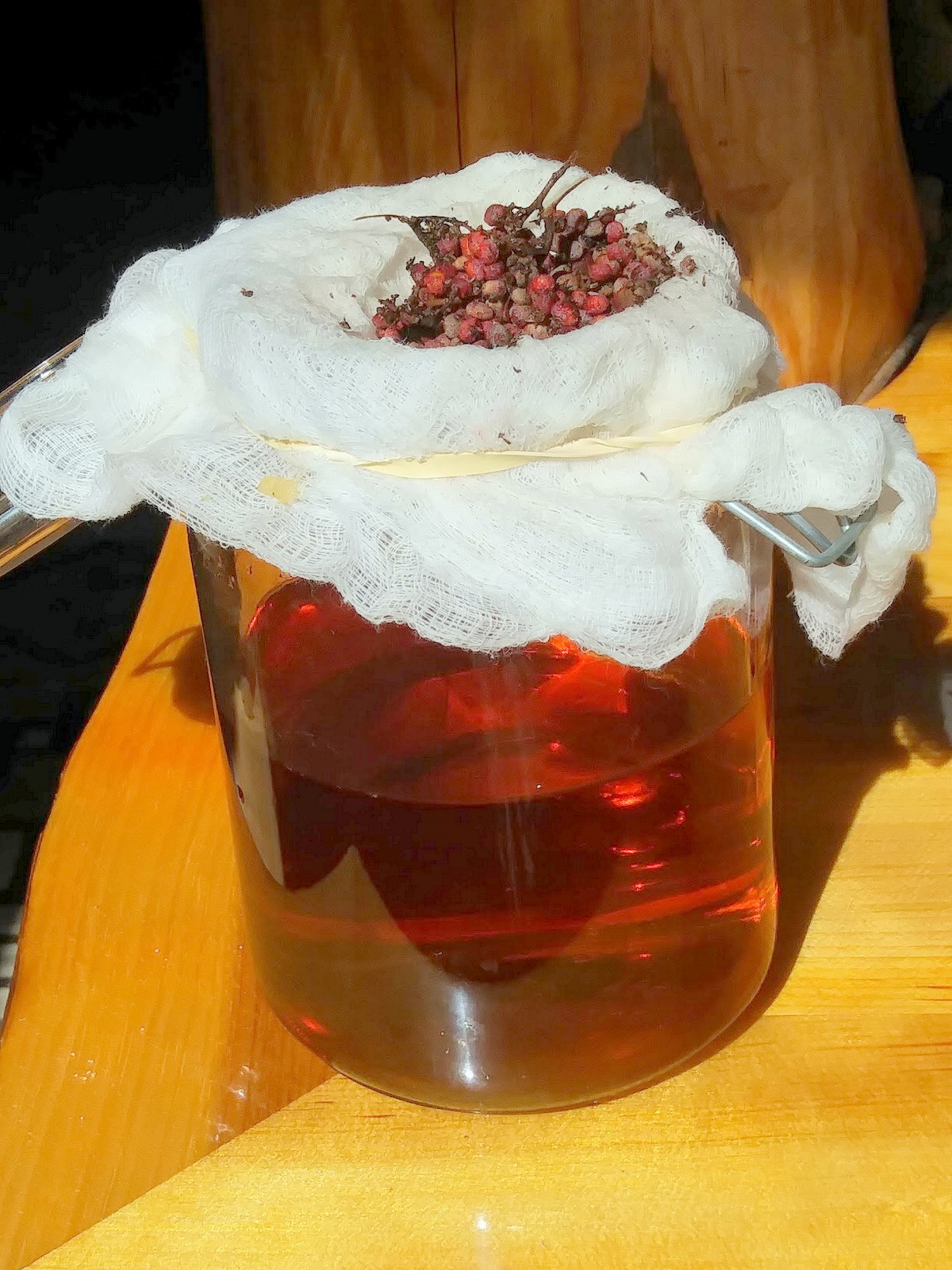 Sumac Spice
The Sumac is best harvested in the late summer when the sumac cluster is a deep red – looking close you should be able to see a fine red-colored fur. Don’t take sumac that has already started to turned grey and decay or get moldy.

Take the center stems off and loosen up the berries. They should fall off in smaller clusters. Put them into a dehydrator or oven on cookie sheets at the lowest setting (150-200 F). Cook them for at least 3 hours or until dry. Grind the dried berries in a coffee or spice grinder. A small nut grinder is perfect for this kind of processing. Then push this material through a mesh sieve to remove the larger seeds.

I used a ceramic pestle to push the finer particles through the sieve. The remaining sticks and seeds can go in compost. Store the spice in an airtight container. 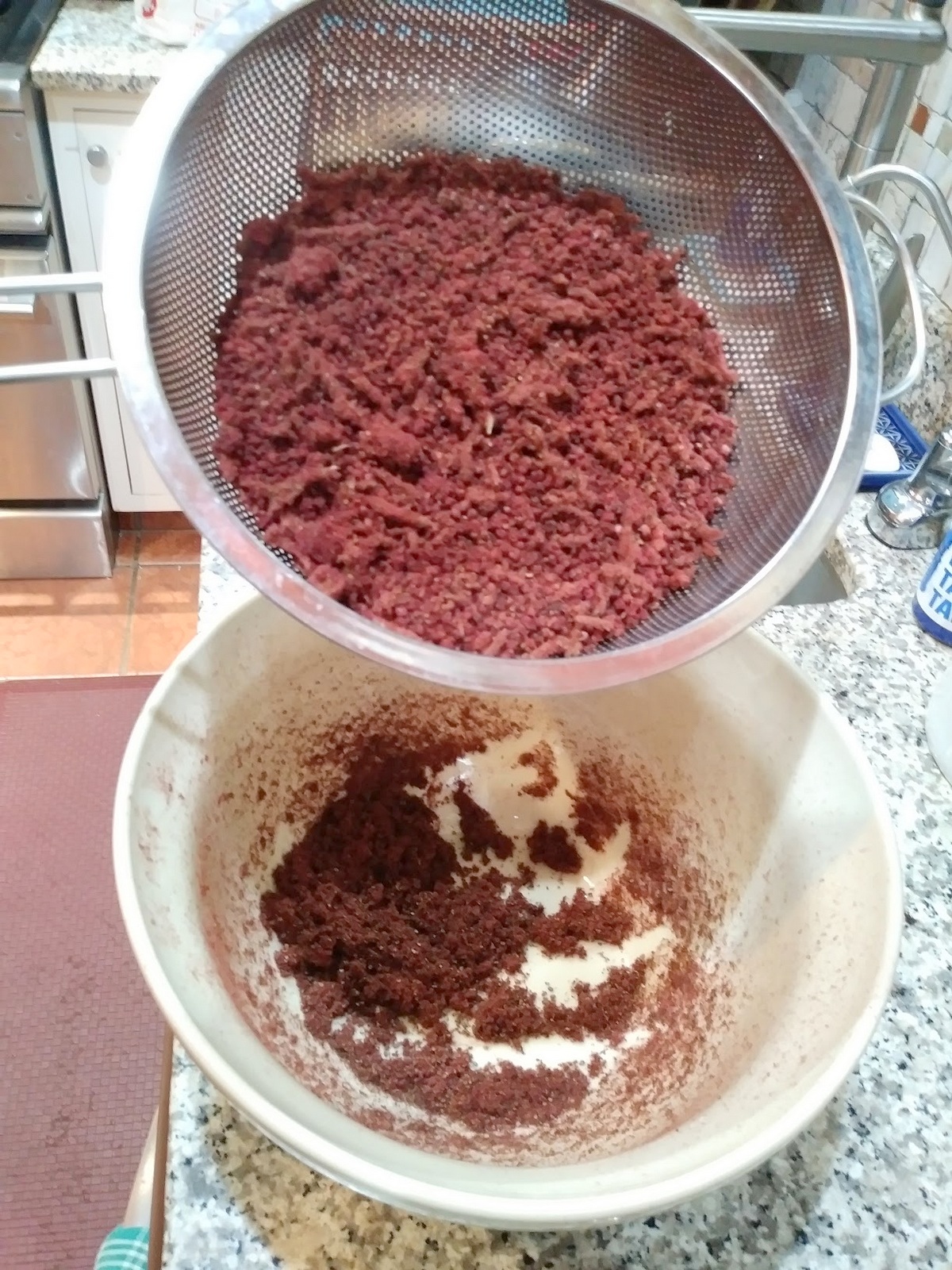 Pushing the ground-up sumac berries through a sieve to make the spice. (Marta Hanson)

1. Heat oven to 375 F. Roll out dough on parchment paper to fit inside roughly 13-by-18 inch backing sheet. Pinch edges so they are slightly raised.
Brush entire surface with beaten egg
2. Mix ½ cup sumac spice, granulated sugar, almond flour and butter. Spread over surface of pastry, leaving 1-inch border. Layer apple slices so they overlap like tiles – ½ shifted to right then back again – this allows packing in more apples.
3. Back for 10 minutes then decrease temp to 325 F and back for 20-25 minutes, until tart is puffed and golden on top and apples are cooked. Remove from oven; let cool for 30 minutes.
4. Mix remaining 1-2 tbls sumac spice with confectioners’ sugar and sift evenly over the tart. Cut into rectangles and serve warm with ice cream or whipped cream.

You can substitute store-bought Middle Eastern or Turkish sumac spice, but reduce the amount by half and add some sugar to taste so that the spice mixture is tart but not sour.