Once a week, Emma Bilski meets with a group of college students at Gilman Hall and tries to help them understand who once walked on that very patch of North Baltimore land hundreds of years ago.

Long before there was a “Maryland” – or the “Johns Hopkins University” they now attend – there were indigenous people here, including the Susquehannock.

Attracted by the same rich resources that drew the European colonizers who eventually wiped them out, they came down from their permanent villages along the Susquehanna River to set up seasonal hunting and fishing camps in the forests and coastal wetlands of what’s now Baltimore and the Chesapeake Bay. 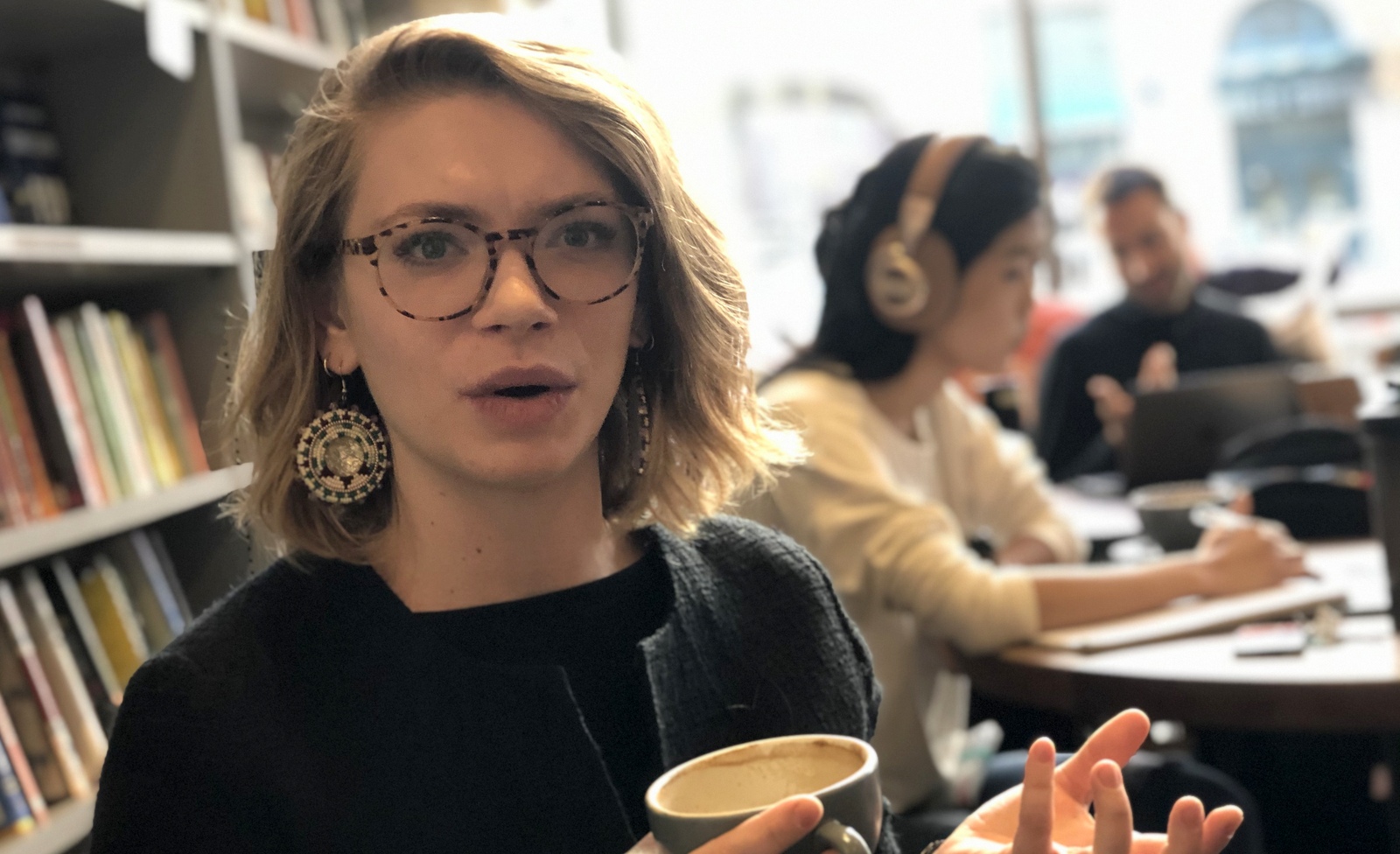 “Even historians don’t tend to think of this as indigenous space,” says Emma Bilski, of Johns Hopkins University. (Fern Shen)

Recently Bilski, who teaches a course on the “Indigenous Chesapeake,” came across a document that helps convey native peoples’ primal connection to this land – the text of the July 5, 1652 treaty whereby the Susquehannocks gave it away to the white people.

It didn’t take long for the treaty to be broken.

Ceding rights to a major chunk of northern Maryland along the Bay, tribal leaders signed a document with colonial Maryland leaders that said the parties “doe promise and agree to walke together and Carry one towards another in all things as friends and to assist one another accordingly.”

It didn’t take long for the treaty to be broken by a series of brutal encounters.

Amid colonization and pressure from the Iroquois, the Susquehannocks moved south. Soon their numbers were decimated as a result of disease and unprovoked attacks by Virginian colonists (Bacon’s Rebellion).

“In September 1675, a militia of backwoodsmen from Maryland and Virginia laid siege to the new Potomac fort of the Susquehannocks,” where they had been forced to resettle by the Maryland colonial government, Bilski said, quoting from a 1968 monograph by Francis Jennings on the tribe’s final years.

The Susquehannock may no longer exist as an organized society, but for history PhD candidate Bilski, who is non-native but is passionate about her subject area, finding the treaty was exciting. 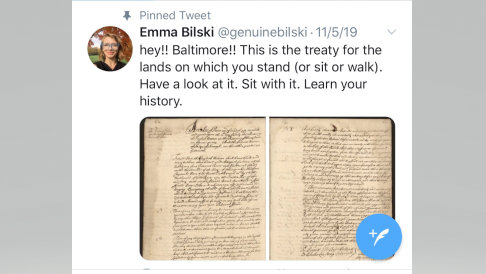 But she and others view this yellowed document as more than a tool for education. They plan to use it to help with a specific campaign: pushing area colleges and other public entities to adopt formal policies acknowledging indigenous peoples as traditional stewards of the land.

It’s part of an international trend. Universities and other public bodies in Canada, New Zealand, Australia and, increasingly, the U.S. are opening meetings with these declarations of respect and are considering other more tangible gestures, such as scholarships and professorships.

“It might mean at big gatherings a statement that ‘We are meeting today on stolen and un-ceded land,’” explained Ashley Minner, an artist and scholar who teaches at the University of Maryland, Baltimore County (UMBC) and who is an enrolled member of the Lumbee tribe.

Speaking with The Brew, Minner has some sharp advice for organizations trying to get in on the movement.

“Institutions should pay indigenous folks to inform their plans,” she said. “And they should not have indigenous people to come in and perform the acknowledgement – it should be done by the organization’s leaders.”

At Johns Hopkins, they are being spearheaded by the Center for American Indian Health at the Hopkins Bloomberg School of Public Health. 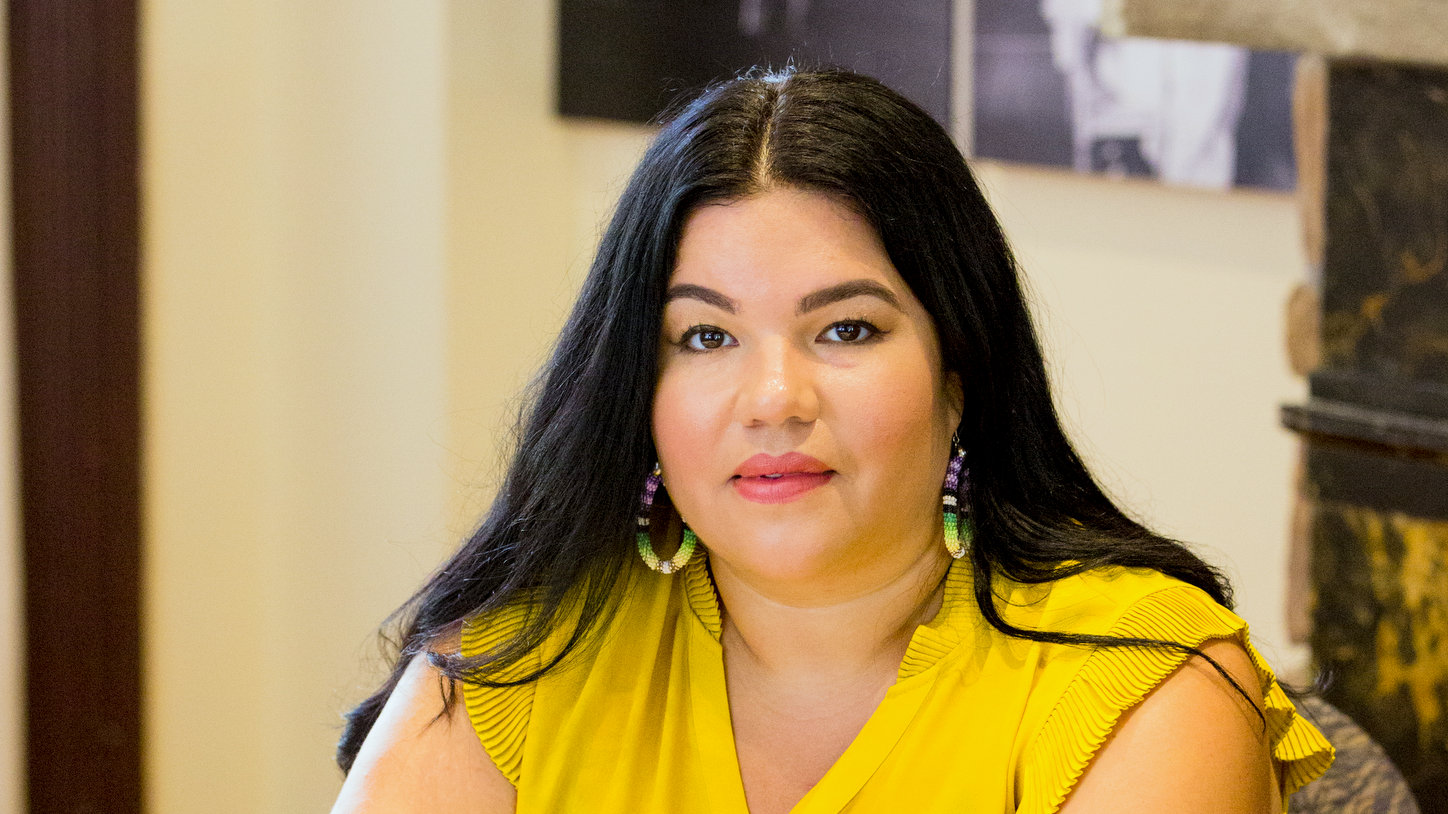 In all of these cases, documentation plays a key role.

“We’re using the treaty to help start conversations about this process of land acknowledgement,” Bilski said.

Still, she cautioned against overemphasizing a single colonial document, describing it as part of a larger research effort to encourage the public to think more about the indigenous history of Maryland.

“There’s been such a permanent erasure of the history and continuing presence of native people here,” she said. “Even historians don’t tend to think of this as indigenous space.” 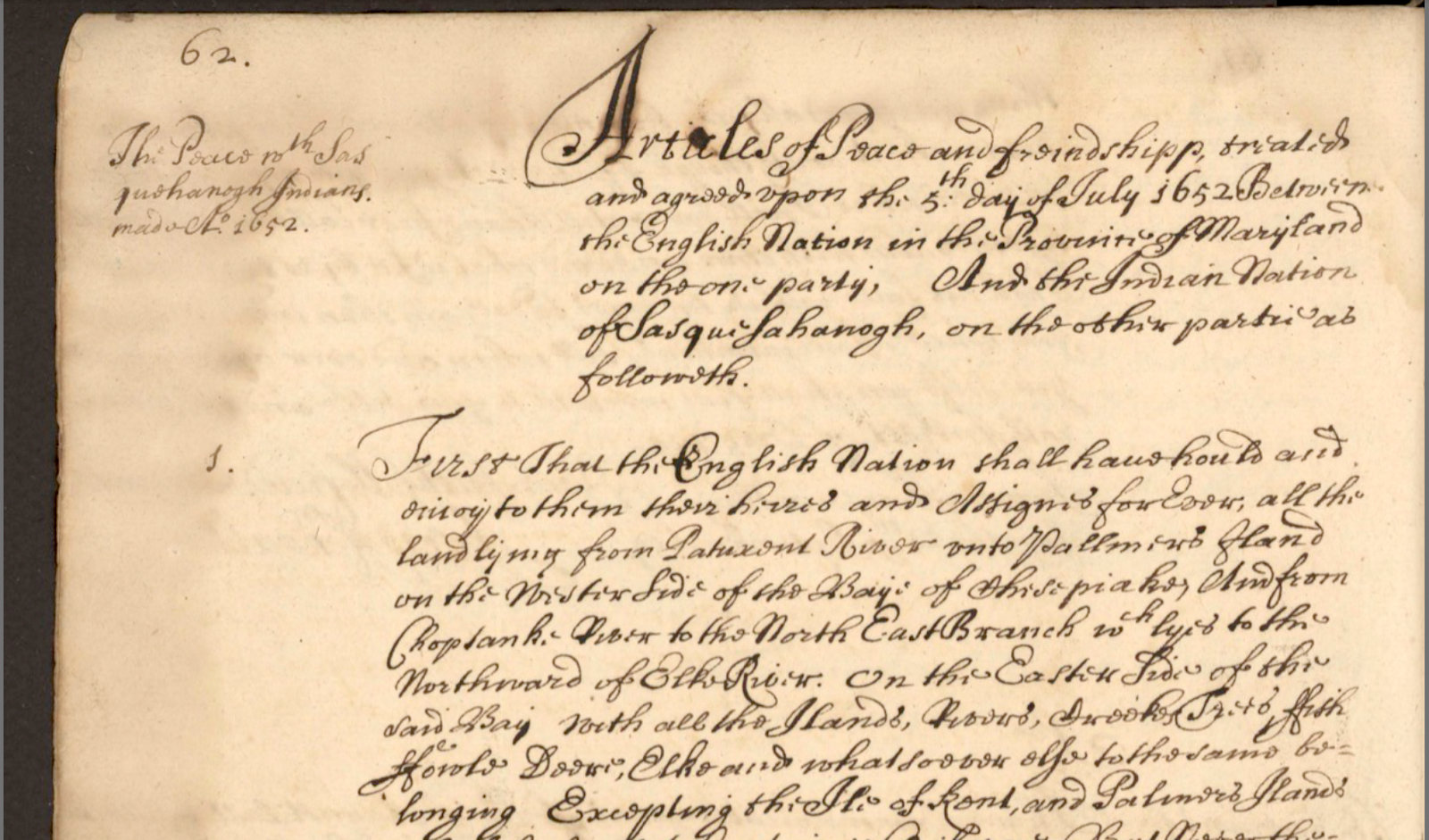 Detail of a summary of Maryland’s 1652 treaty with the Susquehannocks. (Maryland State Archives)

That continuing presence is a major focus for Minner’s research and teaching at UMBC.

“One of the ways we’ve been ‘disappeared’ is by historicizing us, but, you know, we’re still here,” she said.

“Following World War II, thousands of Lumbee Indians migrated from rural North Carolina to Baltimore City seeking jobs and a better quality of life,” Minner writes on a Google map she made of the main place where they settled – Upper Fells Point and Washington Hill.

Once so densely populated that it was known as “The Reservation,” this area is still a home base for Baltimore’s native community and for the Baltimore American Indian Center, a community hub that offers family assistance and sponsors events like the annual pow-wow.

Minner, a UMBC professor of the practice, leads walking tours of the neighborhood and publishes the results of her research. 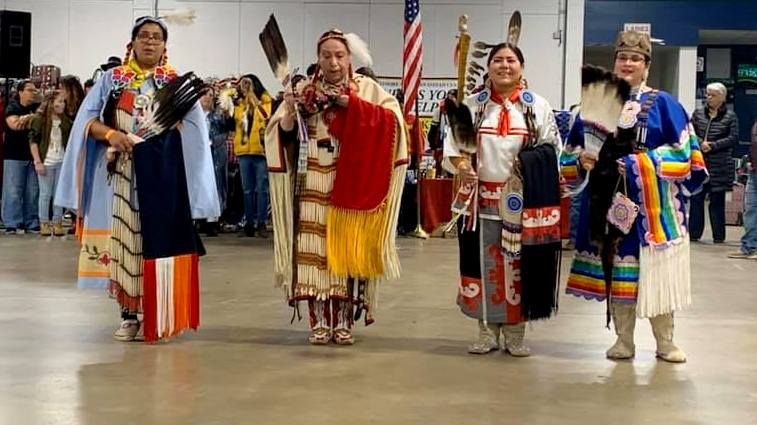 Bilski points out that, while the Thanksgiving holiday for many Americans is still an occasion to retell the story of the 1621 “pilgrims and Indians” feast in Plymouth, Massachusetts, for others it is a day to reflect on genocide and suffering.

“Happy un-thanksgiving!” she said at one point, referring to the alternative remembrance many hold, the National Day of Mourning, on that fourth Thursday in November.

(In Baltimore last month, an added feature was a rally organized by the group Indigenous Strong to demand that Baltimore change the name of the Columbus Day holiday to “Indigenous Peoples Day.”) 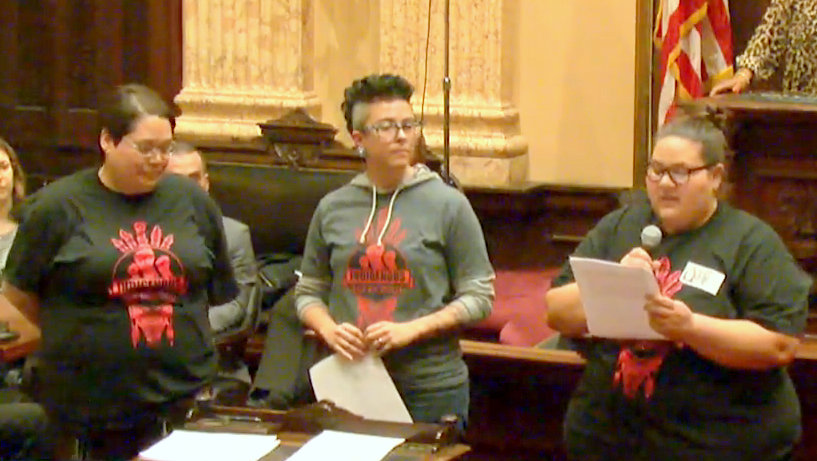 What’s in a Name

The Susquehannock are just a part of the Chesapeake region’s rich native history. There were also the Nanticoke of the Eastern Shore and the Piscataway of the Potomac Valley, people living in the area that was not, Bilski points out, really the Susquehannock’s to cede away.

(The Piscataway were formally recognized as a tribe by Maryland in 2012 and continue to actively assert their rights today.)

The early presence of multiple groups has been verified in historical accounts, such as Thomas Harriott’s 1590 descriptions of area Algonquian-speaking people (“their attire is the skinnes of beare’s heads and Woolues”) and in the archaeological record, including artifacts found in Baltimore dating back to the Paleo Era of 8,000-1,000 BC.

“There were three prehistoric sites found in the city. Two of them were destroyed,” according to a 1988 monograph by Louise E. Akerson housed at Indiana University.

The discovery of skulls and bones found on the Eastern Shore in the 1980s provided information on the Choptank people living there between 900 to 1400 (but also generated protests by native groups over the way these human remains were to be handled.) 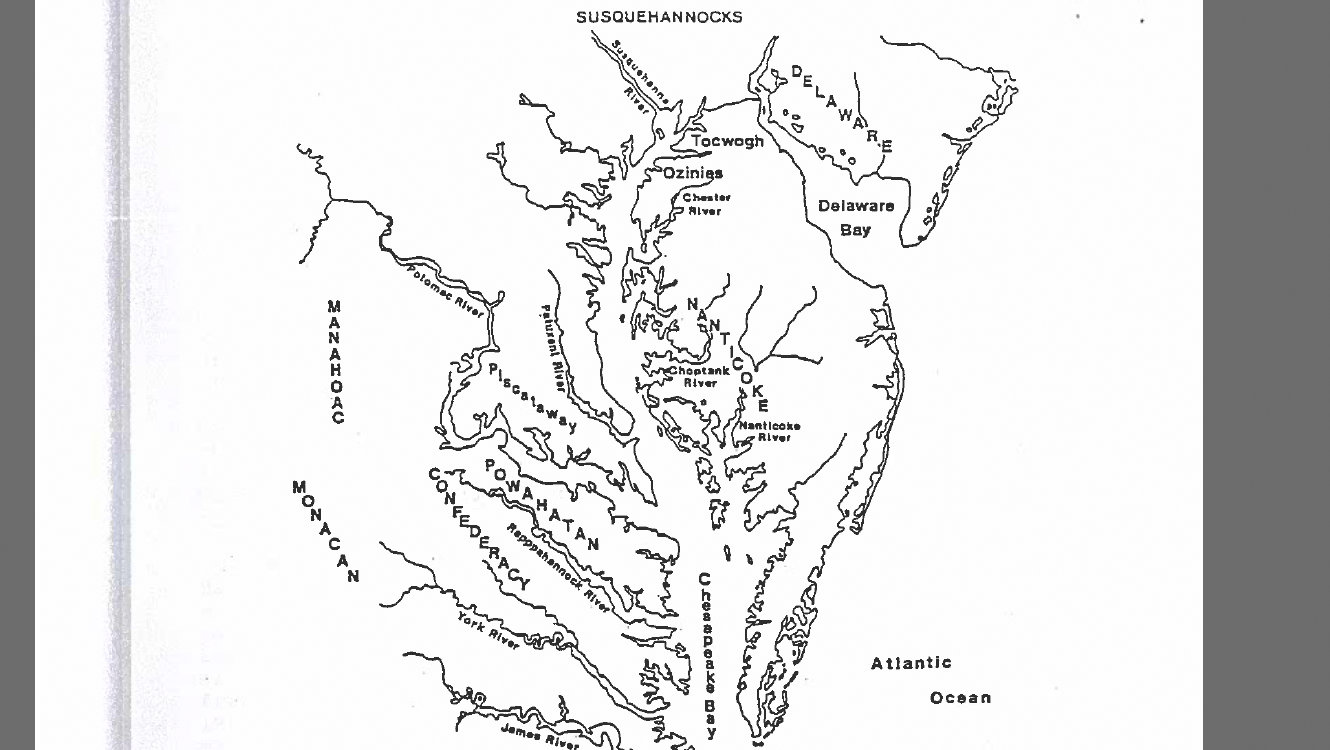 Map of the tribes in Maryland before the European colonists arrived. (Louise E. Akerson, “American Indian in the Baltimore Area”)

Another way to see evidence of the area’s first inhabitants: just look at a modern Maryland map.

Here’s a list of the indigenous place names people use today without even thinking about their origins. “Chesapeake” is from the Algonquian chesepiooc, referring to a village “at a big river.” “Patapsco” is derived from pota-psk-ut, which translates to “backwater.”

Old Court Road doesn’t have its original name, but it has been identified as “an old Indian trail that was repurposed in the late 17th century.”

Signing on the Severn

By the time European colonists arrived in the early 1600s, the Susquehannock were at war with the Piscataway and “eventually felt threatened enough to make a peace and land treaty with the English,” Bilski said.

As specified in the document, the territory being ceded stretched on the Bay’s western shore from the Patuxent River north to Palmer’s Island (now called Garrett Island).

On the eastern shore, it ran from the Choptank River all the way up to the Northeast River near present-day Elkton.

This is the map Bilski roughed out to show the treaty area:

Yellow diagonals on either side of the Chesapeake Bay show the land covered by the Susquehannocks’ 1652 treaty with colonial Maryland. (Emma Bilski)

She knew of the existence of the 1652 treaty and credits Michelle Fitzgerald, a curator at the Homewood Museum, with tracking down a transcription of it in “the Proceedings of the Council of Maryland 1636-1657.” (It’s on microfiche in the Maryland State Archives.)

The parties met on the Severn River, near present-day Annapolis.

The signers included five Susquehannock war chiefs who probably made their “mark” on the original document, but whose names are phonetically spelled as Sawahegeh, Aurotaurogh, Scarhuhadih, Ruthcuhogah and Wathetdianeh.

An interesting side note on Lloyd is his familial connection to a subsequent racial injustice that occurred in the Chesapeake region – the enslavement of Africans.

He is the great grandfather of Edward Lloyd IV who built the Wye House plantation in Talbot County, famous because one of the people enslaved there was the celebrated abolitionist and author, Frederick Douglass.

“Not really a coincidence,” Bilski said. “The Maryland signatories were the powerful men of the colony and the treaty is what allowed them to feel at liberty to establish plantations on the land.”

Here is a transcription of the text from the document in the Maryland State Archives. 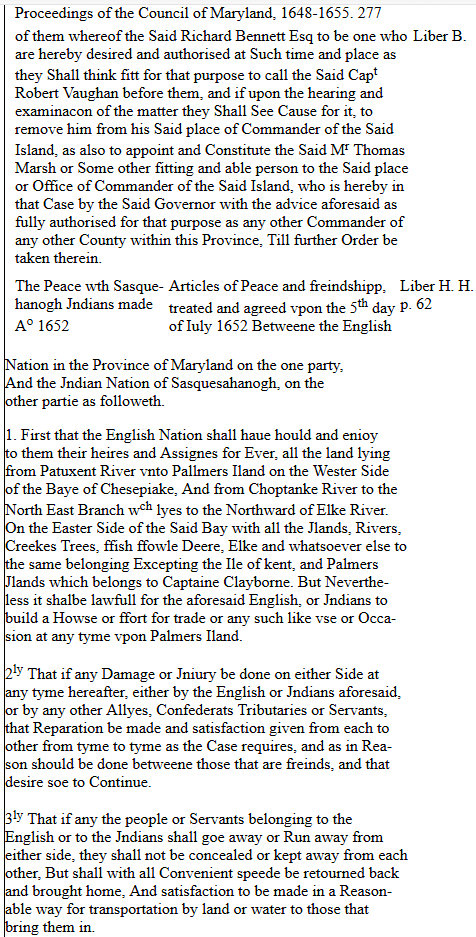 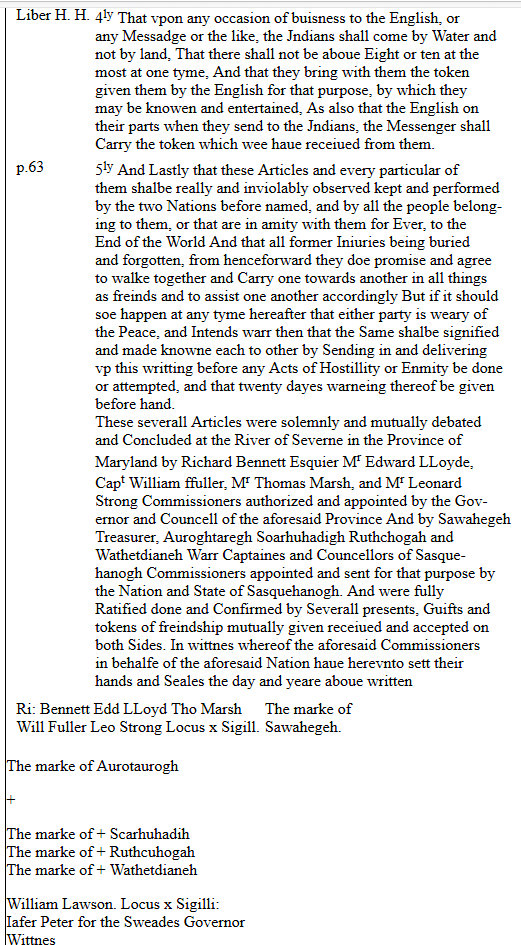