Sending a message of pride and protest, marchers came to Baltimore’s Federal Hill Park today where they found the flagpole empty and raised two flags on it:

A rainbow-striped Pride flag and a Transgender Pride flag with a Black fist in the center.

The action, one of many activities taking place across the city and country on Juneteenth, was a joyous occasion accompanied by music and dancing.

“It’s a day to celebrate Blackness and all it encompasses,” a participant named Legacy said.

Juneteenth, which commemorates the end of slavery in the United States, has been celebrated by African-Americans for years, but has gained a new resonance and broader attention in the wake of George Floyd’s death at the hands of Minneapolis police last month. 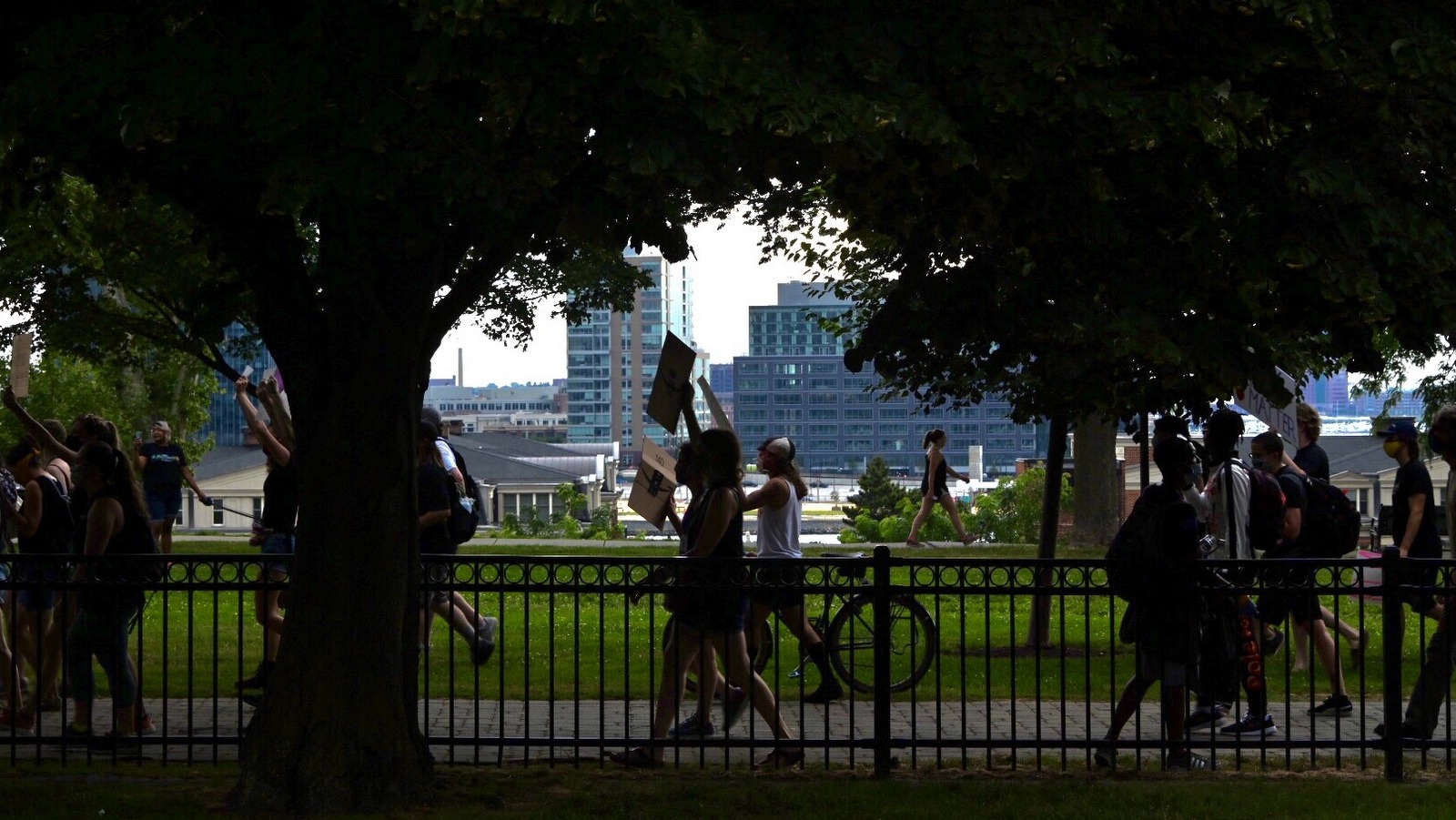 The Federal Hill action was also a solemn occasion, part of the worldwide condemnation of police violence and remembrance of those who have suffered from racism and police violence.

“We also felt that through all of this all the unjust killing of Black individuals, a lot of LGBTQ names and people and faces get forgotten,” Legacy said, noting that June is Pride month and mentioning victims, including Tony McDade, a transgender man fatally shot by Tallahassee police.

Another organizer noted that the group didn’t replace a U.S. flag with its action today – there had simply been no flag flying when they got there.

“It was weird there has been no flag here for a few weeks and ropes were just hanging,” Henry said. “I just thought we should hang ours.” 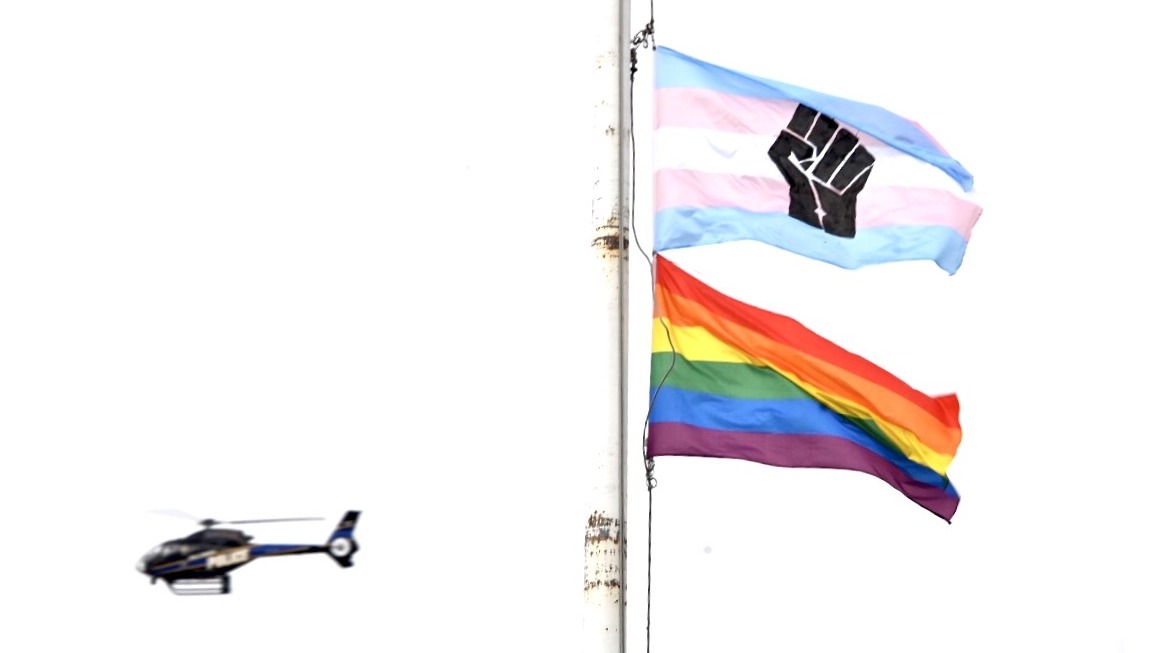 Foxtrot monitors the march as the flags fly. (J.M. Giordano)

Henry said the Bmore Youth Coalition and a number of groups came together to coordinate the protesters, who started at McKeldin Square and then proceeded, chanting, to Federal Hill on the south side of the Inner Harbor.

Asked why they had chosen that spot Henry answered this way:

“We all believe in police abolition and we want our city to re-allocate funds from police and towards health care, housing, job development, education and other social services to keep us safe because we believe that police do not keep us safe,” he said.

“If you look at white neighborhoods and other counties – they have good social services which reduces crime. We have one of the highest percentages of police spending for our population of any city in the country and still it doesn’t keep us safe,” Henry continued.

“We’re demanding more resources for Black communities that have been historically discriminated against.” 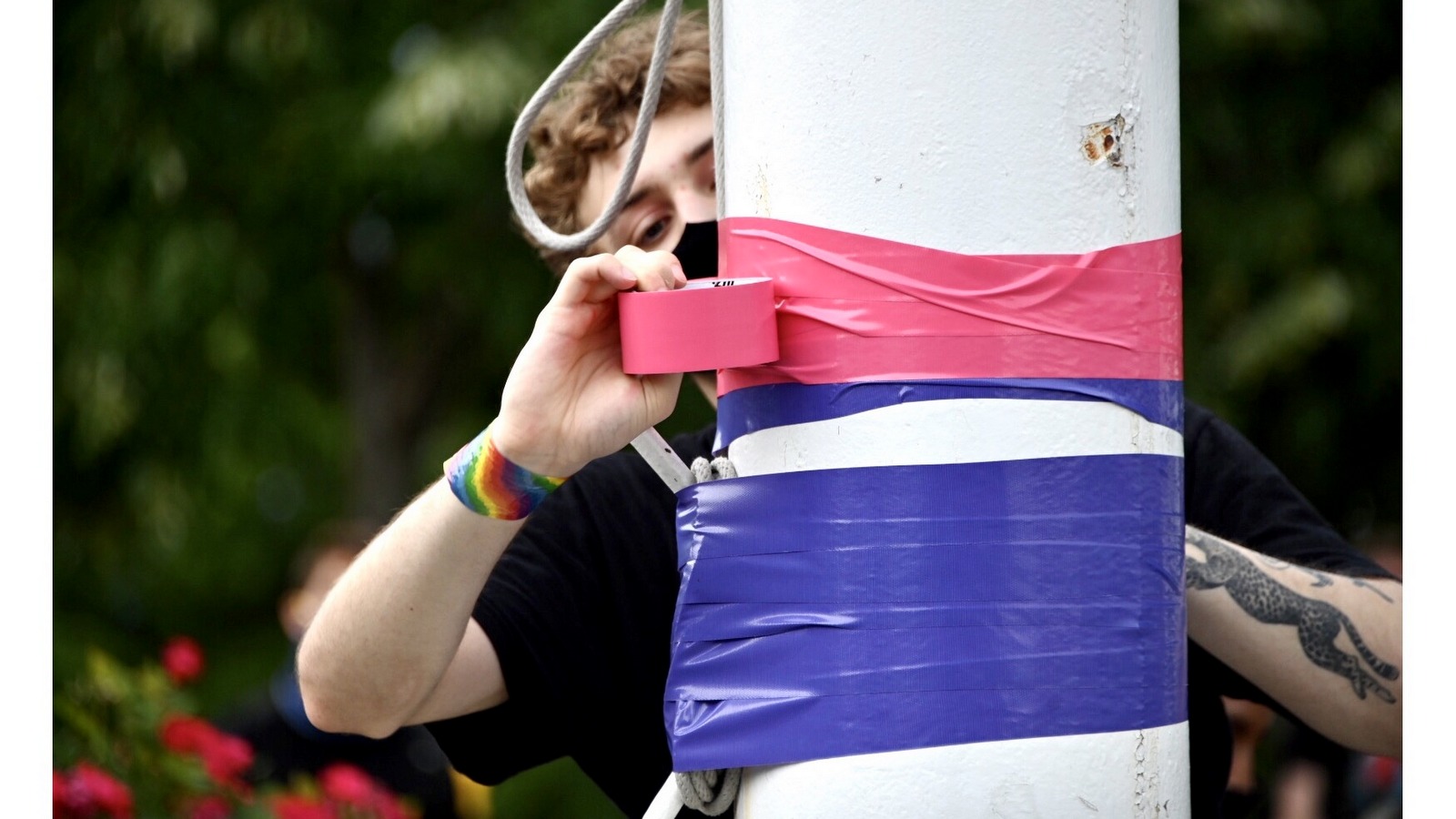 An organizer secured the ropes to the flagpole to deter anyone from lowering them. (J.M. Giordano)

Asked why they chose Federal Hill to make their statement today, Legacy answered this way:

“This is a very gentrified and tourist-attracting area,” she said. “We wanted to disrupt the whiteness in that way.”