Is Maryland Governor Larry Hogan taking a victory lap for his management of the pandemic before the race is won?

His counterparts in New Jersey, New York, Pennsylvania and Connecticut have issued orders advising against travel to specified states where the pandemic is surging out of control.

Most importantly, citizens who travel to those states have been told to quarantine themselves upon return.

Hogan’s failure to take similar action threatens to reverse the progress made by Maryland against the spread of the virus.

He should act without further delay and urge residents not to travel to states with a high incidence of Covid-19 and to quarantine themselves upon return if they do.

Those states should include Delaware and North and South Carolina – all popular summer destinations for Maryland residents.

Hogan’s slow response to protecting Marylanders from the resurgence of Covid-19 in other parts of the country comes at a time when he is promoting a memoir about his tenure as governor (in anticipation of what many believe to be a presidential run in 2024).

The book is titled “Still Standing: Surviving Cancer, Riots, A Global Pandemic and the Toxic Politics that Divide America.”

Ironically, publication was delayed as chapters were added to tout his response to the pandemic, where, at least in its early phases, Hogan gained national media attention for stressing the seriousness of the crisis and calling on the Trump White House for help.

Hogan’s political ambitions might not have a happy ending if his resolve to competently manage the virus fails him at this crucial moment.

He is now planning a virtual book tour, following the book’s anticipated release on July 28, with events to include former Republican governors, like Arnold Schwarzenegger of California and Jeb Bush of Florida.

His political ambitions might not have a happy ending if his resolve to competently manage the virus fails him at this crucial moment and his early success in managing the pandemic turns to failure.

New York and New Jersey were hit hard early in the pandemic. Anxious to protect their citizens from a resurgence, they have imposed a voluntary quarantine on individuals traveling from 18 southern and western states experiencing serious outbreaks.

The quarantines apply to travelers from the covered states as well as to their own residents returning from trips to those states. The new rules apply to anyone who travels by car, plane, bus or train, but excludes those who pass through the states for a limited duration, such as layovers for air travel or highway rest stop for cars and buses. 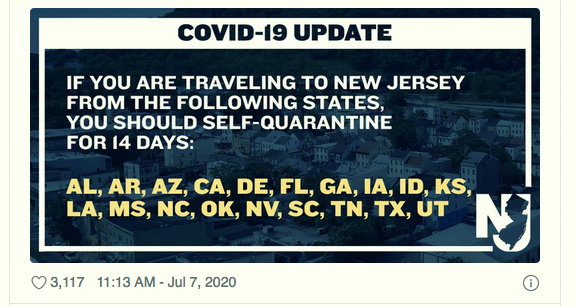 Individuals are advised to self-quarantine for 14 days. Compliance is “expected” but not yet mandatory.

The rationale for the travel restrictions is not based on whim or singling out certain populations.

For example, the states subjected to the quarantine rule in New York and New Jersey are presenting a 10% or higher positivity rate for the virus. New Jersey Governor Phil Murphy says he acted after the state experienced several local outbreaks “directly tied to travel from Covid-19 hot spots nationwide.”

As of this writing, Pennsylvania has not placed Delaware on its restricted list, but that has not stopped Philadelphia from taking action. On Wednesday, it implored its residents not to visit beach resorts or other locations in Delaware where Covid-19 is spiking and asked them to self-quarantine if they do so.

A travel advisory and quarantine will save lives even if it only slows or partially mitigates a resurgence.

Hogan and Marylanders can be proud of what they did earlier this year to bring the pandemic under some semblance of control.

The governor generally acted wisely and decisively and, with confidence in his leadership, citizens for the most part did what they were asked to do.

That progress can evaporate in a heartbeat if Maryland drops its guard. Over and over again this pandemic has punished citizens for the failure of their leaders to act in a timely manner.

The Maryland Department of Health recommends that citizens be tested for the virus after returning from out-of-state travel. But by itself that measure is insufficient because of the delays between returning to Maryland, getting tested and then waiting for results.

Also, there is a high percentage of false negative test results, especially if testing is done shortly after exposure to the virus. Testing is not the answer to the problem of importing the virus from other states unless combined with a quarantine.

Hogan announced the publication of his memoir on Twitter earlier this week .

A Test of Courage

Hogan has faltered before in his management of the pandemic. He drew criticism from some county executives and the mayor of Baltimore for what they perceived as his abrogation of state responsibility for decisions on re-opening Maryland’s economy.

It likely was no coincidence that Hogan transferred decision-making authority for stay-at-home orders and business closures to the counties at a time when opposition by his Republican supporters to those measures was growing louder.

Those same GOP supporters will no doubt be displeased by renewed “infringements” on their freedom to travel. Hogan knows that, and that would appear to be the source of his hesitancy to reinstate a travel ban and quarantine order.

The governor should dispense with such shortsighted political calculus and do his best to shut down unnecessary travel to and from states where the pandemic is out of control. And he should do so long before his book tour – and before it is too late to make any difference.

• David A. Plymyer retired as Anne Arundel County Attorney in 2014. He writes on matters of law and public policy, most recently on half-hearted legislative efforts at police reform and the destructive role of the Fraternal Order of Police.