Baltimore City State’s Attorney Marilyn J. Mosby spent two weeks in Europe in May 2019, learning about the prison systems in Germany and Portugal while staying at the Hilton Berlin and Lisbon’s PortoBay Liberdade, both five-star hotels.

Two months after that, she was in Edinburgh, Scotland, ensconced in the Balmoral Hotel to attend a gathering designed to foster cross-global collaboration about U.S. drug sentencing laws.

Overall, in 2018 and 2019, Baltimore’s top prosecutor went on 23 out-of-town trips sponsored by nonprofits and other groups, according to financial disclosure statements filed with the Maryland State Ethics Commission.

In so doing, Mosby accepted at least $30,672.63 in airfare, hotel rooms and per-diem expenses – by far the largest amount of travel reimbursements of any elected official in Maryland.

In fact, no other state’s attorney in Maryland’s 23 other jurisdictions reported accepting any private reimbursements for travel in 2018 and 2019.

Mosby gets the second highest salary in Baltimore government after Police Commissioner Michael Harrison. According to the city’s employee database, she received her full salary ($238,772) in fiscal 2019 despite being frequently absent on sponsor-paid trips.

Asked why she is out of town so often, Mosby’s spokeswoman, Zy Richardson, said, “Every time the state’s attorney has traveled, it has been to deepen her knowledge of alternative approaches to criminal justice.”

What started as a cursory review by The Brew of campaign contributions to city officials led to the unexpected discovery of Mosby’s robust travel schedule and other striking data:

The company’s existence was not disclosed until an amended statement was filed by Mosby on July 2, 2020 to the Maryland Ethics Commission.

Richardson describes the company as a “long-term venture” by the prosecutor “to help underserved Black families who don’t usually have the opportunity to travel outside of urban cities.” She said the company will not operate while Mosby is state’s attorney.

Among the 41 gifts she reported was a Tiffany bracelet, whose dollar value was listed as unknown. Richardson said Mosby donates most of the gifts to an office auction.

According to Richardson, the insights Mosby gained after visiting Germany’s prisons and learning about Portugal’s drug decriminalization “has allowed the office to begin exploring ways to help reform the criminal justice system in collaboration with other agencies and to continue to increase our combined efforts to ensure the health and well-being of those confined.”

“She has never sought to hide her travel,” the spokesman said, in answer to a series of questions from The Brew, and “has been fully transparent with her ethics obligations.”

By accepting private sources of funding for her out-of-state travels, “the vast majority of trips came at no expense to taxpayers,” Richardson said. “In fact, in the course of three years, the only cost to taxpayers has been approximately $5,300.” 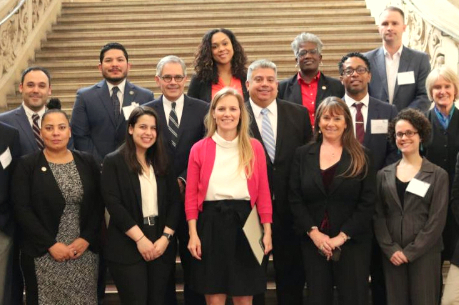 Mosby (center top) poses with other U.S. prosecutors in Berlin in May 2019. She posted this photo of a giraffe from her trip to Kenya last August. (@fairandjustprosecution, Instagram) 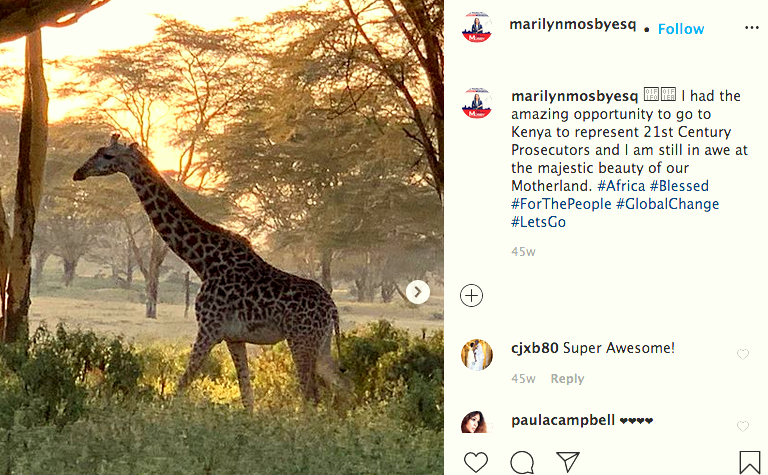 The youngest top prosecutor in any major city when she defeated Gregg Bernstein in 2014, Mosby gained national prominence when she charged six Baltimore police officers in connection with the 2015 death of Freddie Gray. None were convicted.

After cruising to a reelection victory in November 2018, she stepped up her travel enormously. Her ethics disclosure statements show that:

• In the 10 months prior to the general election (January-October 2018), she took five paid trips lasting 13 days.

In addition to paid trips to Europe, Africa and Scotland, she has attended conferences in Alabama, Arizona, California, Georgia, Louisiana, Massachusetts, Minnesota, New York, Tennessee, Texas and Wisconsin in 2018 and 2019.

In stark contrast, none of the 23 county state’s attorneys in Maryland report any reimbursed travel over this period, according to a review of their disclosure statements.

Her husband, Delegate Nick Mosby (who stands to become Baltimore’s next City Council President after the November general election) also reported no paid travel in 2018 and 2019.

The only prominent state official found to have accepted travel gifts (other than Mosby) was Senate President Bill Ferguson. He reported that the Baltimore Metropolitan Council sent him to a conference in New Orleans in 2018 valued at $500. 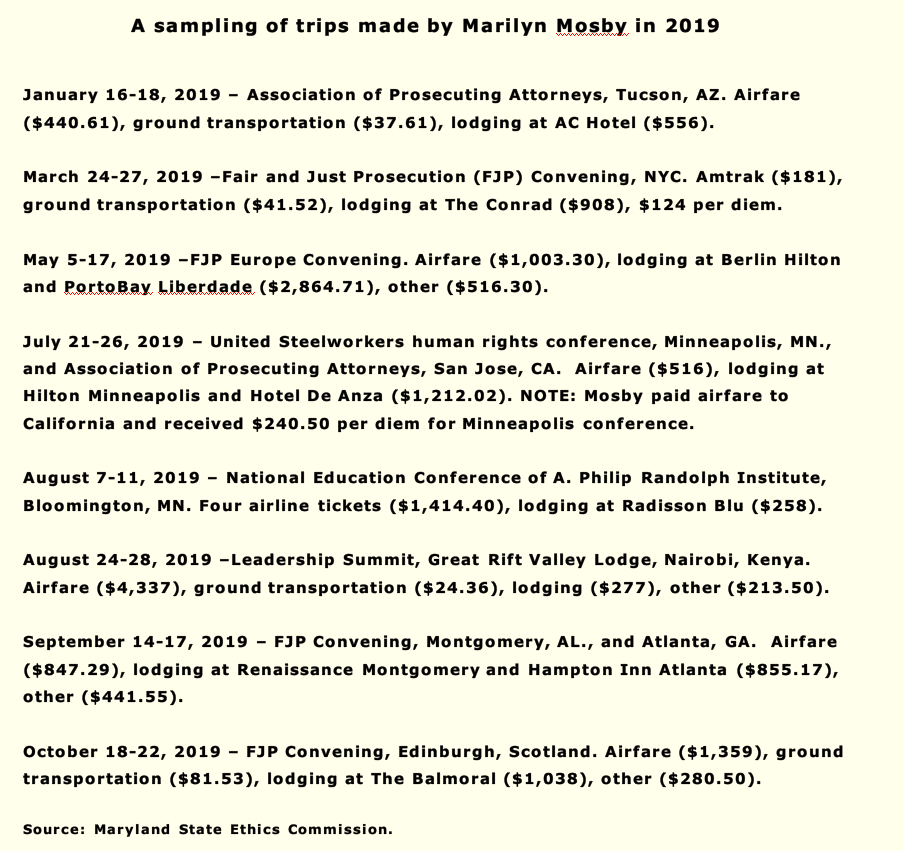 Over the last five years, violent crime in Baltimore has exceeded 300 homicides, a modern record. Mosby has run the state’s attorney’s office during those same years, assuming her post on January 8, 2015.

Asked if her travels have taken her attention away from Baltimore’s crime crisis, Richardson said the trips “have inspired” Mosby to implement new policies aimed at reducing mass incarceration and improving public safety in the city.

“Public officials should always take opportunities to learn about how other cities and countries handle these issues,” Richardson said. “When she wasn’t working remotely from [out-of-town] locations, her deputies, who collectively have hundreds of years of legal experience, stepped in to ensure proper supervision over the 217 prosecutors in the office.” 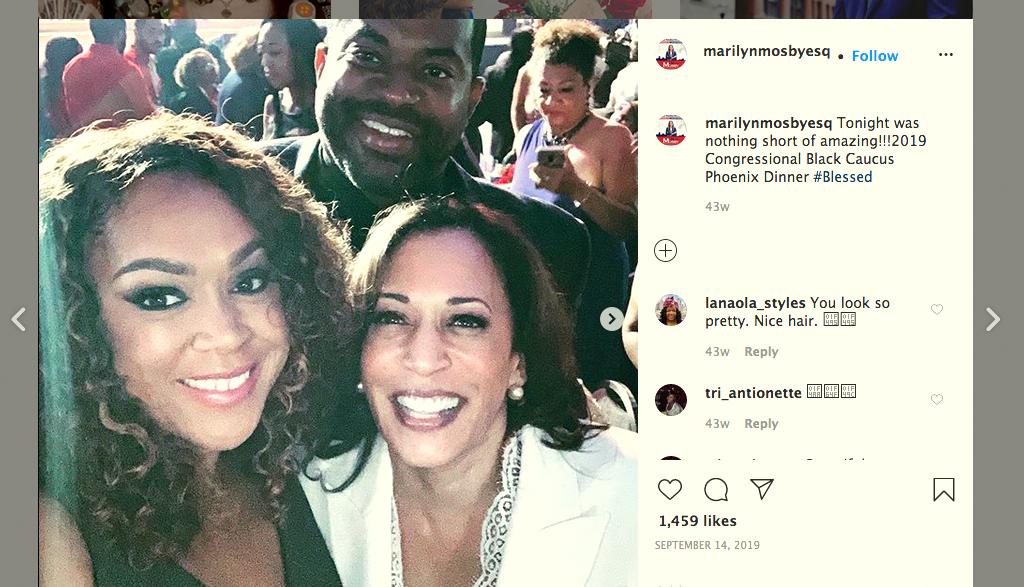 Marilyn Mosby in Washington with U.S. Senator Kamala Harris at the Congressional Black Caucus Awards Dinner last September. Mosby sandwiched the dinner between trips to Memphis (for a National Public Safety Partnership symposium) and Montgomery (for a Fair and Just Prosecution Policing and Race meeting).

Young Living Essential Oils gave her $623 worth of gifts, while CURA Cannabis Solutions, the Portland marijuana company, gifted her with $188 worth of “select CBD Drops (2), disposable Pen, Patch, Capsules (2).”

The only two elected state officials who reported a higher dollar value for gifts than Mosby were Gov. Larry Hogan and Lt. Gov. Boyd Rutherford. Together they received about $5,000 worth of gifts in 2018 and 2019.

Hogan and Rutherford said they accepted the gifts (framed photos, calendars, mugs, a baseball bat, etc.) “on behalf of the state.”

Richardson said Mosby donated “the majority of the gifts” to an office auction “during our Winter Solstice celebration where we raise money for victims of crime.” 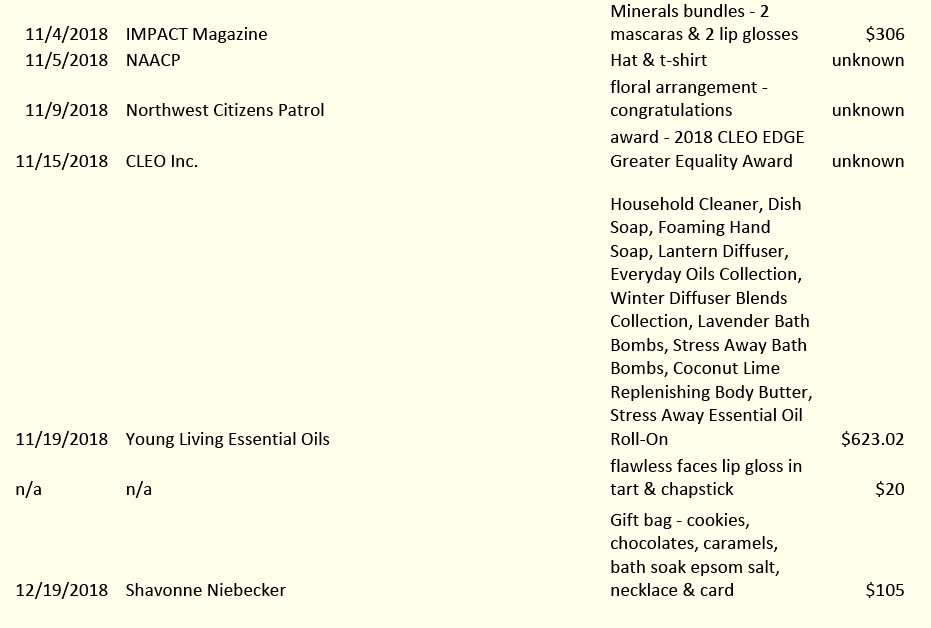 Gifts accepted by Mosby in 2018 and 2019. (Maryland Ethics Commission) 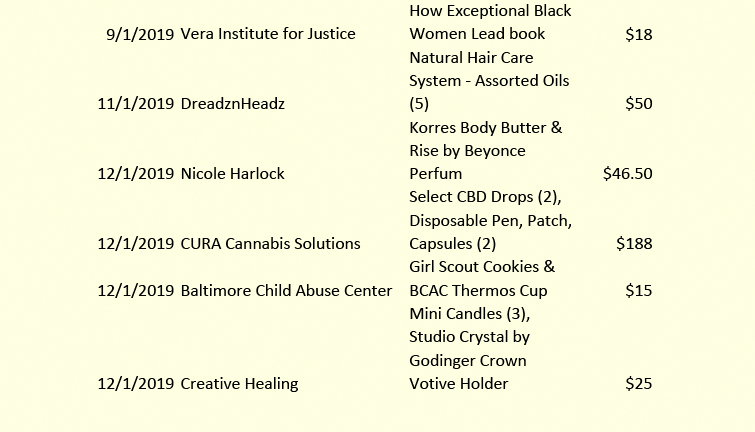 Also in contrast to other elected officials, The Brew found that Mosby owns a company for travel and legal consulting.

Shortly after returning from the Berlin-Lisbon prison inspection trip in May 2019, Mosby formed Mahogany Elite Enterprises, listing herself as resident agent and owner. 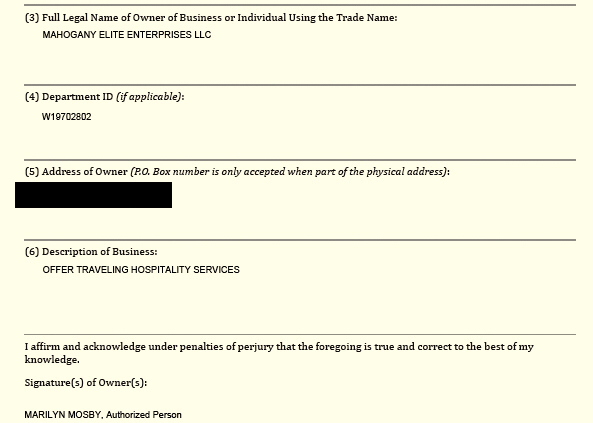 Mosby incorporated Mahogany Elite Enterprises in May 2019, but did not initially report the business on her state disclosure statement. (Articles of Incorporation, SDAT)

Although the businesses were established during 2019, they were not disclosed in that year’s financial statement, which Mosby submitted to the Ethics Commission on January 30, 2020.

On July 2, 2020, however, Mosby submitted an amendment to the 2019 statement that lists the three businesses.

The new information was filed three days after The Brew began examining Mosby’s travel activities and downloading her ethics filings.

Richardson said Mosby established the travel company “to help underserved Black families who don’t usually have the opportunity to travel outside of urban cities, so they can vacation at various destinations throughout the world at discount prices.”

In response to questions about what revenues and clients it has accrued, Richardson said, “there are no clients and she has not received a single cent in revenue.” She added that Mosby has “no plans to operate the company while she is state’s attorney.” 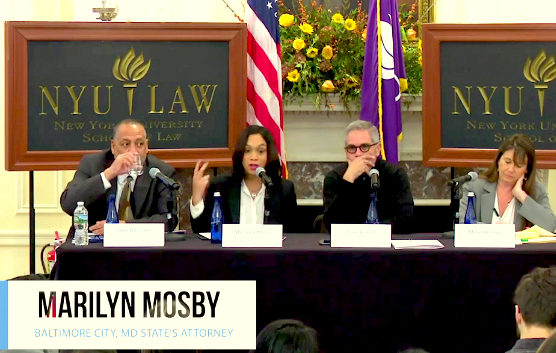 Mosby speaks at the New York University Law School in 2019. To her left is Miriam Krinsky, director of Fair and Just Prosecution, a nonprofit that underwrites many of Mosby’s trips. (@fairandjustprosecution)

Several sponsoring organizations contacted by The Brew said they reimbursed travel expenses directly to Mosby, and said they were not aware of any payments made to Mahogany Elite.

For a four-day conference last November in Memphis, for example, Mosby’s travel expenses were covered through the National Safety Partnership, according to Carolyn Binder, senior manager for the Institute for Intergovernmental Research.

“There have been no payments from the Institute for Intergovernmental Research made to Mahogany Elite,” Binder said in an email.

None of the sponsors contacted said they paid Mosby a speaker’s fee or a fee for participating on panels.

Miriam A. Krinsky, executive director of Fair and Just Prosecution, which paid for Mosby’s trips to Germany, Portugal and Scotland, praised her as “a bold and visionary leader on important and timely criminal justice reform issues.”

Krinsky and Mosby have collaborated on newspaper op-eds on prison reform and police interrogation of young people.

The head of the Association of Prosecuting Attorneys, David LeBahn, called Mosby “a very good voice and a very welcome voice.” He added that she was “a pretty faithful attendee” of the group’s meetings.
____________________
To reach the reporters: editors@baltimorebrew.com