Baltimore State’s Attorney Marilyn J. Mosby has taken to social media to defend her out-of-town trips, calling coverage of them unfair, while declining to answer many questions about the travel company she incorporated last year.

Mosby offered remarks on Facebook over the weekend in response to last Thursday’s Brew story and a Fox45 follow-up about her travels and formation of several businesses to provide consulting and “travel hospitality” services.

One of her Facebook comments reads, “I have NOTHING to hide. I answered EVERY question which is why they’re reporting on the data ‘I’ provided.”

Another says, “Please don’t be dooped by media with an agenda.” (She later noted the correct spelling is “duped.”)

A third says: “I will continue to fight for you even if you don’t recognize that’s [what] I’m doing. I’ll be the sacrificial lamb in a city that has lacked stability for the past five year.” 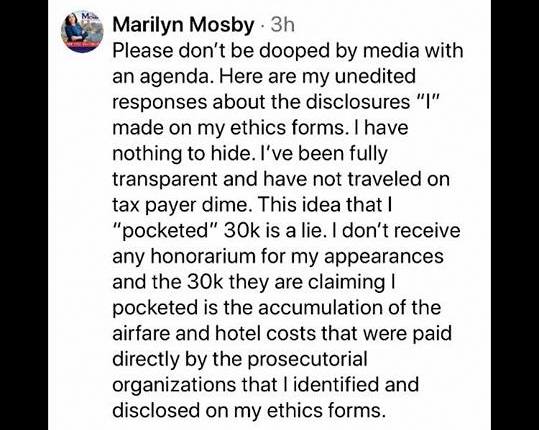 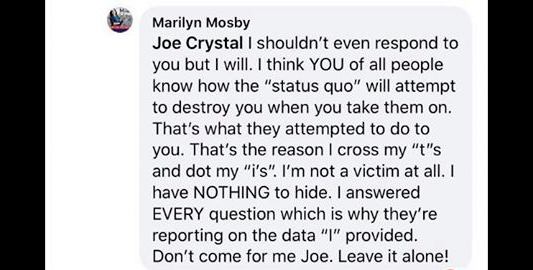 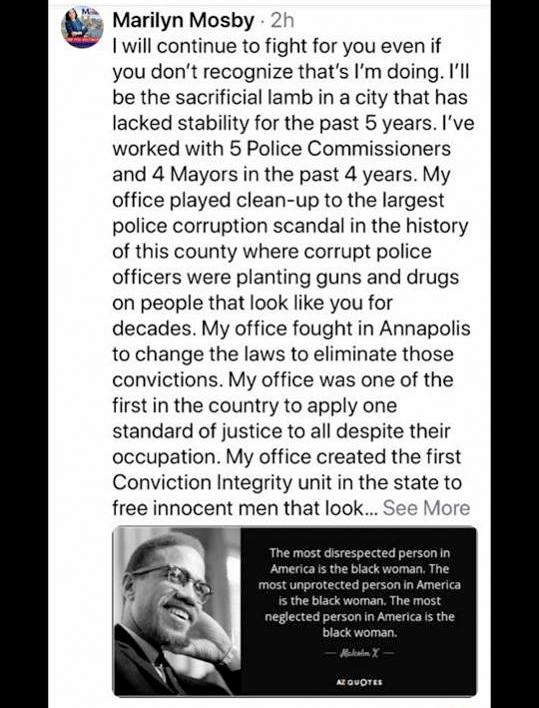 Comments by Marilyn Mosby on the Baltimore Crime and Homicide Facebook page.

But while the city’s top prosecutor was vociferous on the Baltimore Crime and Homicide Facebook page over the weekend, she had little to say in response to The Brew’s questions about Mahogany Elite Travel and the two other for-profit entities she formed last year.

She offered a limited response on the same subject last week, saying the entities were created “to help underserved black families. . . vacation at various destinations throughout the world at discount prices.”

Her statement described the travel business as a “long-term venture” (her term in office ends in January 2023) and said it currently has no clients and no revenue stream.

The existence of Mahogany Elite Travel – together with Mahogany Elite Consulting and Mahogany Elite Enterprises LLC – was revealed last week by The Brew after the prosecutor disclosed them in a July 2 amendment to her financial disclosure statement to the Maryland Ethics Commission.

The amendment was filed days after Mosby was notified that her ethics forms were being reviewed by this website.

After numerous attempts to interview Mosby were rejected, The Brew submitted questions about the Mahogany companies to her spokesperson, Zy Richardson.

Among the unanswered questions: why Mosby didn’t disclose the travel company for many months, and what was its budget, business plan and staff organization?

Among them: why did the prosecutor incorporate the three businesses shortly after she had started her second term in office? Why did she wait five months to amend her state ethics form and disclose their existence?

The Brew also asked for the company’s budget, business plan and staff organization.

After promising to provide answers, Richardson stopped responding. Mosby has not made any statement other than her weekend messages on social media.

Richardson did say last week that her boss’s belated disclosure of her companies had nothing to do with inquiries by The Brew. She additionally said the company will not operate while Mosby remains state’s attorney.

Mosby’s original statement, filed last January 30 to the Ethics Commission, stated that she had “no ownership in business entities” in 2019.

Richardson said this statement was “filed by our chief of staff at the time, and likely it was just an omission. She [Mosby] went back and checked and realized that she needed to add that back in there.”

Mosby had planned to submit an amendment disclosing the companies in April (the state deadline is April 30), but was stymied by the pandemic.

“Because of Covid – that explains why it was submitted in July,” Richardson said.

State ethics forms are filed electronically by elected officials, who sign the forms under the penalty of perjury.

UPDATE: Richardson has requested that Mosby’s official statement regarding the timing of her amendment be appended to this article. Here it is:

Last month, Baltimore’s former mayor, Catherine Pugh, pleaded guilty to perjury for failing to disclose her interests in Healthy Holly LLC on her state ethics form while she was a senator from Baltimore’s 40th District.

After incorporating Healthy Holly, Pugh had opened a business checking account at Harbor Bank of Maryland. She subsequently funneled at least $568,000 in untaxed income through the Healthy Holly bank account from sales of her children’s books while a senator, according to Maryland State Prosecutor Charlton Howard.

At least another $225,000 was passed through the account just before and after she became mayor of Baltimore in 2016.

This included a $100,000 check, made payable to Healthy Holly LLC, from businessman J.P. Grant that Pugh then partially used to buy a second house in Ashburton.

Pugh is now serving a three-year sentence at the Federal Correctional Institution in Aliceville, Alabama, on federal tax evasion and conspiracy charges.

While Mosby’s statement last week reported that “she has not received a single cent in revenues” from her companies, she has not presented any documentation to back that up.

Mosby and other candidates did not disclose their federal tax returns during the 2018 state’s attorney race, as was done by Brandon M. Scott and most of the other candidates during this year’s mayoral race. (The major exception was incumbent Mayor Bernard C. “Jack” Young.)

Travel during a Crime Spike

In filing for an LLC, Maryland law requires the incorporator to open a business banking account, which is not disclosed in publicly available records.

The Brew has asked Mosby to explain why she formed Mahogany Elite Travel during the middle of a heavy travel schedule, which included trips to Germany, Portugal, Kenya and England.

These and other trips, which kept her out of the office for 67 days last year, were paid for by various nonprofits and other groups, including the Kenyan government and Fair and Just Prosecution, a Washington, D.C., advocacy group.

In response, Mosby’s spokesperson said last week, “Every time the state’s attorney has traveled, it has been to deepen her knowledge of alternative approaches to criminal justice.”

By accepting $25,051.30 in travel reimbursements last year, Mosby’s office argued that she had saved taxpayers’ money.

“In the course of three years, the only cost to taxpayers [for her trips] has been approximately $5,300,” Richardson said last week.

Richardson added that Mosby did not call on the Executive Protection Unit, the police officers assigned for her personal protection, to accompany her on the trips.

Last year, she said she traveled by herself except on one trip to Minneapolis, when she traveled with her husband, state Delegate Nick Mosby, and their two daughters.

In addition to the state’s attorney, the EPU provides security to the mayor and police commissioner.
___________________
To reach this reporter: reuttermark@yahoo.com