At a news conference called to urge residents to “take every precaution” amid the Covid-19 pandemic, City Council President-elect Nick Mosby said he has paid off the $45,000 federal tax lien that was made public just weeks before the election.

“It’s settled, so we’re good,” Mosby said in response to a question from a reporter he faced outside City Hall yesterday.

How was it settled?

“I paid. I was already planning to pay it, I had already been working on paying it, but it’s paid,” Mosby said, in his first in-person comments about the federal taxes that he and his wife, State’s Attorney Marilyn Mosby, owed.

He also responded to several other controversies that emerged prior to the election before he steered his remarks back to warning Baltimore about the threat of the coronavirus, the event’s purpose.

“We thought that it makes sense as a Council to come together and show a unified effort, particularly this week when the city of Baltimore has experienced over 344% increase in four weeks in infected cases,” he said, urging citizens to “stay at home.”

Joining Mosby were City Council Vice President Sharon Green Middleton – plus Council members Danielle McCray, Robert Stokes and Isaac “Yitzy” Schleifer – who each stepped to the microphone to echo his message.  Also speaking was Antonio Glover, who works as a liaison in the State’s Attorney’s Office and will be sworn in next month to represent the 13th council district. 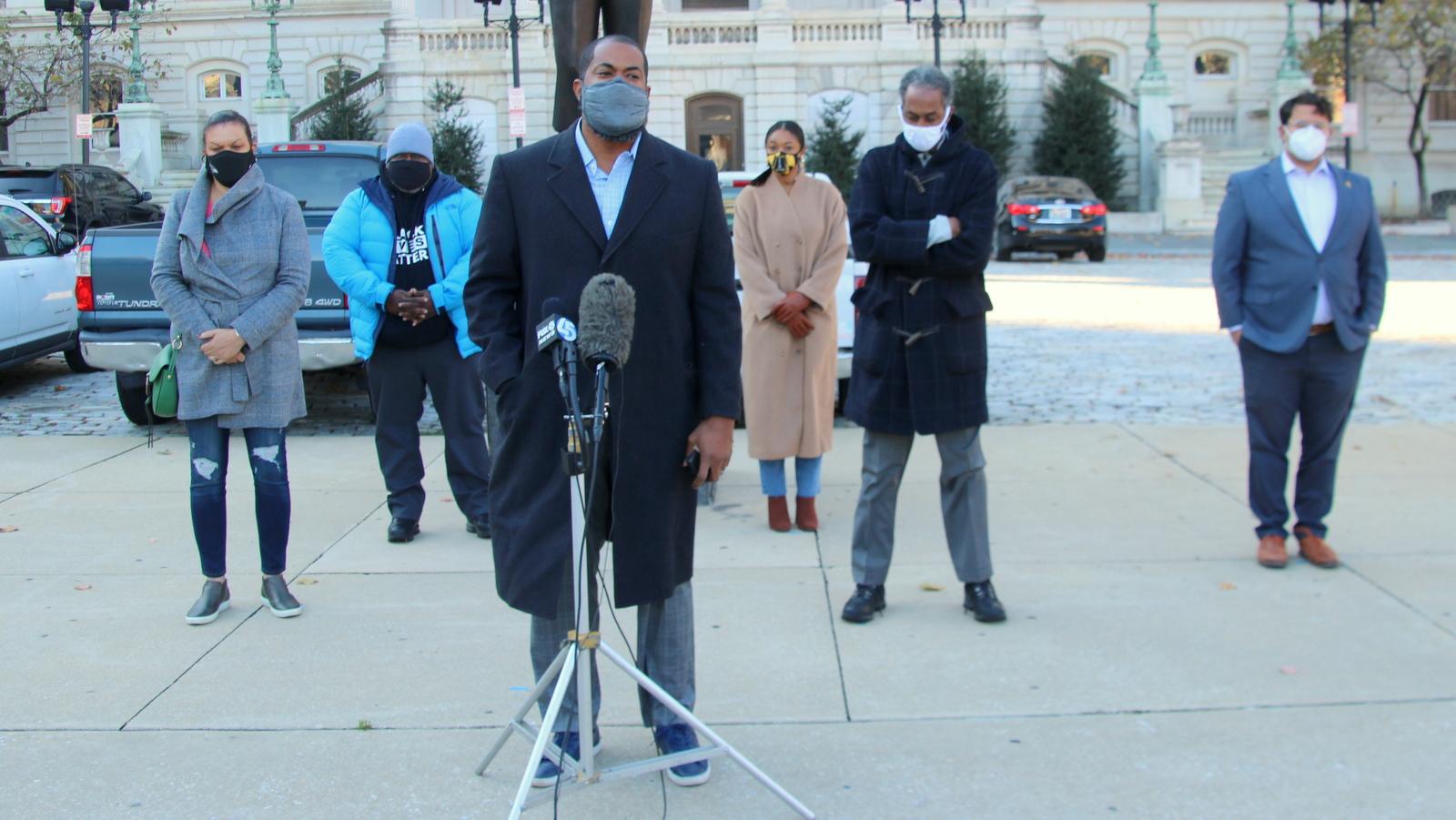 For nearly two months in the run-up to the election, Mosby was not responding to questions from The Brew and other media about his personal business and tax troubles, so yesterday’s questions were not unexpected.

But his replies were at times hard to follow.

When asked, for instance, about the nine new positions created for his office – a 33% increase in staff – during a time when city workers have endured layoffs and a budget freeze, Mosby answered this way:

“Throughout the campaign and also today we understand and know that the citizens of Baltimore need a very strong product in legislation,” he began.

“We understand and know that the citizens of Baltimore need a very strong product in legislation,” said Mosby in defense of nine new positions created for his office.

“So this idea of bringing more professionalism back to City Hall. We actually have fiscal analysts, we actually have policy analysts that are looking at these bills that have a tremendous amount of consequences for down the road was really, really important. So those are things that we’re going to constantly talk about, those are things we’ve been talking about.”

Mosby then returned to the message of the day: his commitment to work on the Covid-19 issue.

“We understand and know that African Americans are affected four times more than anybody else in this country, our White counterparts,” he pointed out.

Mosby also responded to questions about his consulting business – Monumental Squared, LLC – that shares an address with one of his main campaign contributors, developer Samuel K. Himmelrich Jr.

The Brew’s story about the consulting company noted that it was created shortly after he became a state legislator in 2017.

Asked why he set the firm up, Mosby said “anybody has the ability of owning a business. I own the business. It’s a legal business.”

He criticized The Brew story for noting that the address listed on Monumental Squared’s website – 1340 Smith Avenue, Suite 200 – was the same as that of Himmelrich, who has his headquarters there.

Mosby disclosed his company on ethics forms but did not respond to The Brew’s many attempts to ask him about his relationship with the developer.

Himmelrich, who personally and through LLCs contributed at least $12,750 to Mosby’s recent campaign, also did not respond to attempts to reach him.

Speaking with The Brew after yesterday’s press conference, Mosby reiterated that the shared address with the Himmelrich company had no significance.

“It’s an office complex, there’s probably like maybe 100 – 150 offices there,” he said. “You reported on Himmelrich’s office cause his office happens to be there, but he owns the entire commercial space so all the mail goes through the main office and they distribute it.”

Asked if he paid rent for the space, Mosby said that he did.

In a subsequent follow-up, The Brew asked what the leasing arrangement was, how much Monumental Squared paid to rent the space, and whether a discount was applied.

Wenger declined to answer on behalf of Mosby, saying said the matter was not the subject of the press conference. “People are dying and hundreds are testing positive each day right here in Baltimore,” she said in an email. “That is our focus.”

Mosby also characterized as “a hit piece” a Brew story disclosing that he co-owns a West Baltimore property that is not currently registered as a rental and is not lead-certified, according to online records.

Mosby again did not respond to attempts to reach him for that story. As The Brew reported, his partner disputed the online record and claimed the delegate co-owns the house “in name only.”

Yesterday, Mosby did not dispute his ownership of the property from which tenants were evicted in 2012, 2016 and 2018, online court records show. But he questioned the accuracy of the online records and said he could not be held responsible for issues involving the Fulton Street rowhouse.

“This is a property I had nothing to do with – I’m just on the deed from 15 years ago.”

Mosby took a cash payout while Rock retained the right to collect the rent, Rock said.