Nick Mosby took the reins of the City Council today, delivering a speech that worked its way through a century of unsavory Baltimore history – racial segregation, redlining, middle-class flight and highway destruction of neighborhoods – before pledging strong leadership to lead the city to better days.

“The conditions endured were the direct results of policies shaped by bigotry and systemic platforms of white supremacy,” he said, in remarks after he was sworn in as City Council president by Mayor Brandon Scott.

“It’s going to take evidence-based solutions and a sense of optimism that will allow us as a legislative body to address some of the most pressing systemic and fundamental problems of our time,” he continued.

Scott listened as Mosby spoke before reporters and an array of television cameras, including a private company hired to make a video to commemorate the day. 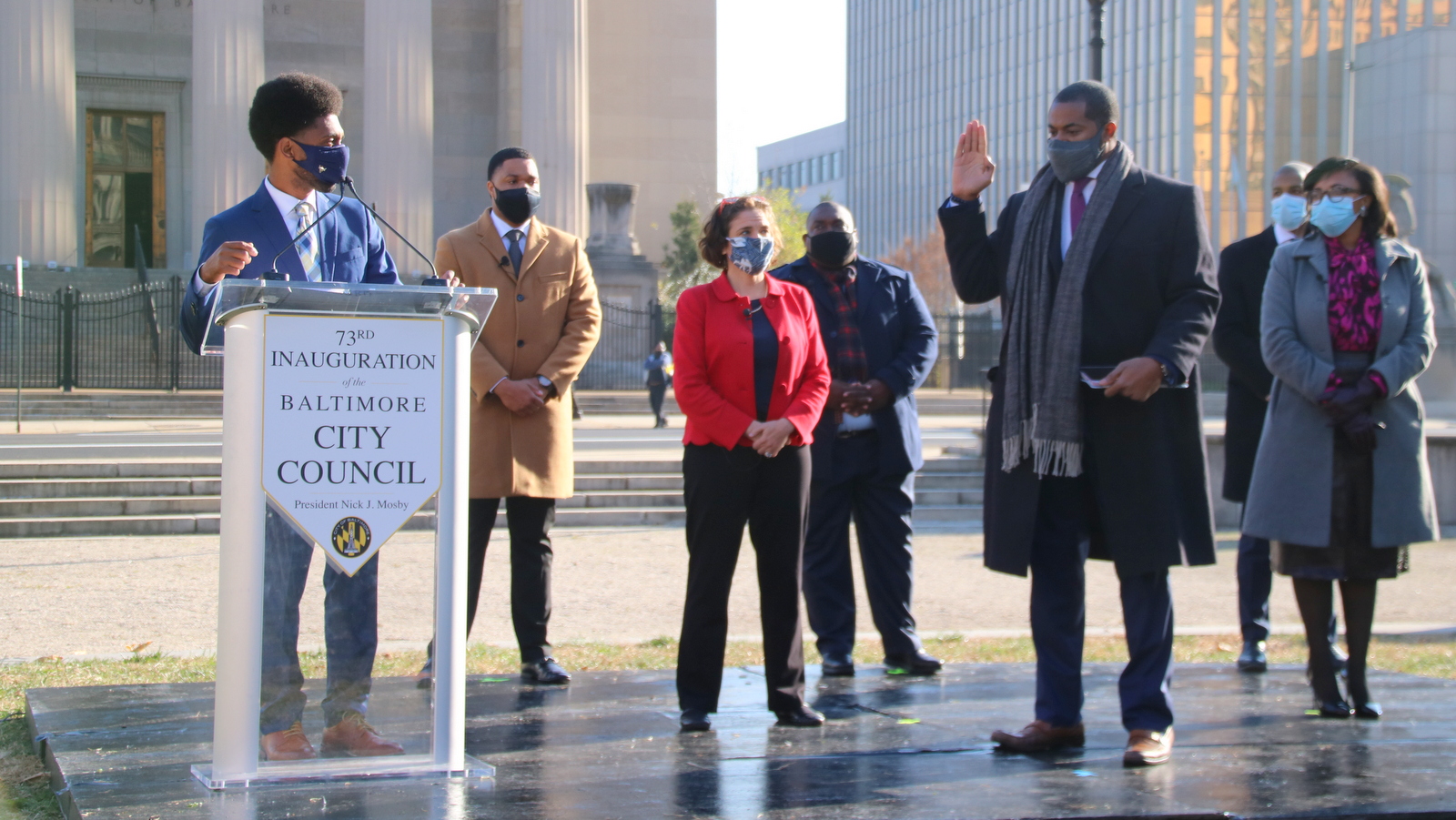 Amid budding tension between the two men – in particular, a clash over Mosby’s plan to create nine additional positions for his office – the new Council president made a point of stressing cooperation, at moments addressing Scott directly.

“We all know that too often,” he continued, “petty personal agendas and debilitating shortsightedness has all too often characterized our city politics.”

Some of his remarks seemed directly aimed at buttressing his argument for the new jobs in his office, which would cost an estimated $715,000 to fund, that he has said are needed to better guide the Council’s actions.

The speech capped a day of swearing-in and oath-taking for Baltimore’s 73rd City Council that was both celebratory and occasionally confusing, thanks to social distancing requirements amid the Covid-19 pandemic.

In contrast to the ceremony that typically takes place before hundreds inside the War Memorial Building, today’s was staged at various locations outside the building. 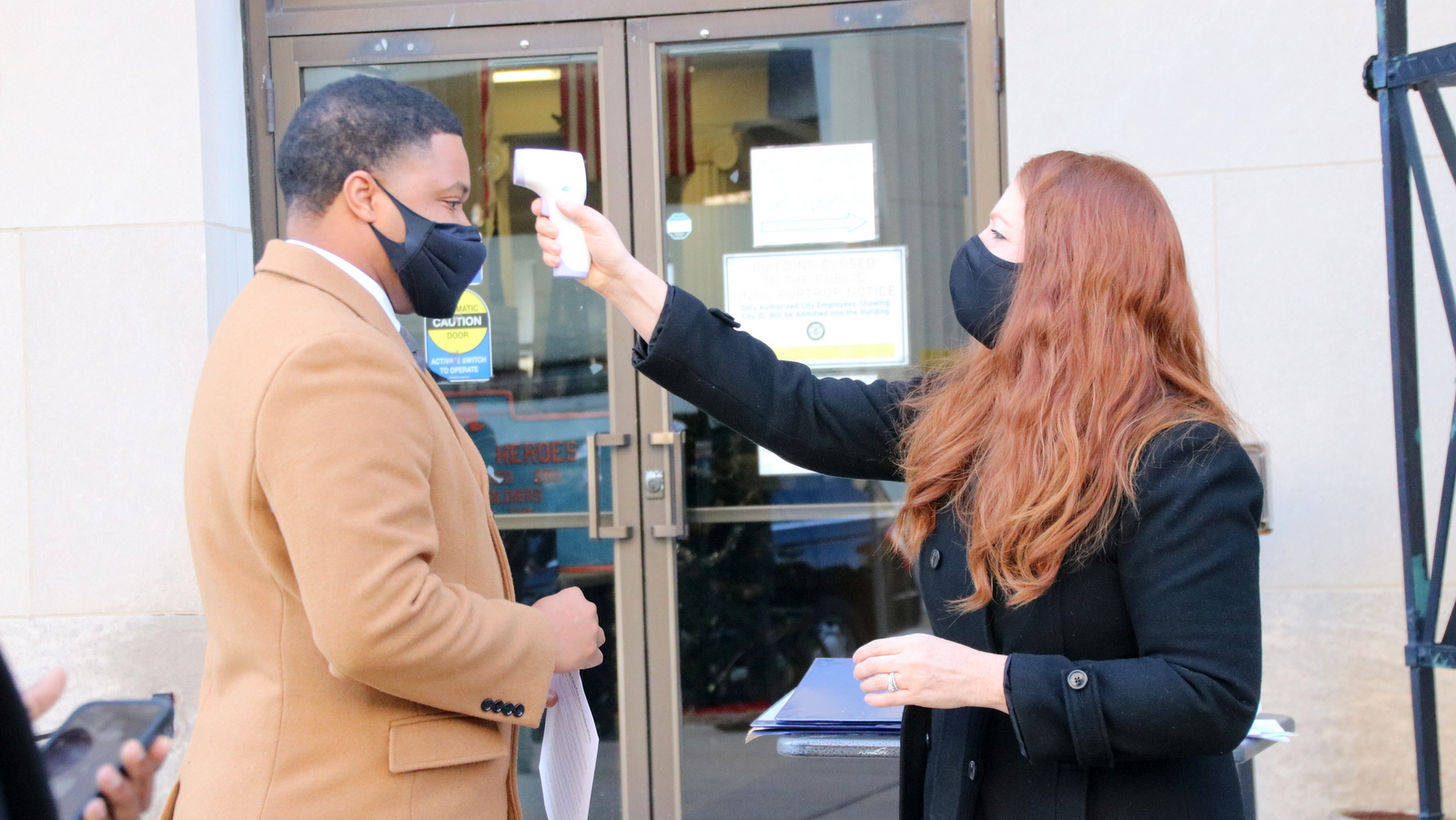 Staffers did temperature checks and asked screening questions of participants in the ceremony.

Returning Council members, at first mounting the building’s steps, were eventually directed to stand on the sidewalk in small groups, raising their hands to take the oath of office from Scott.

They were then sent to a shady spot on the side of the building to sign the official book and pose for photos with family members and Scott. 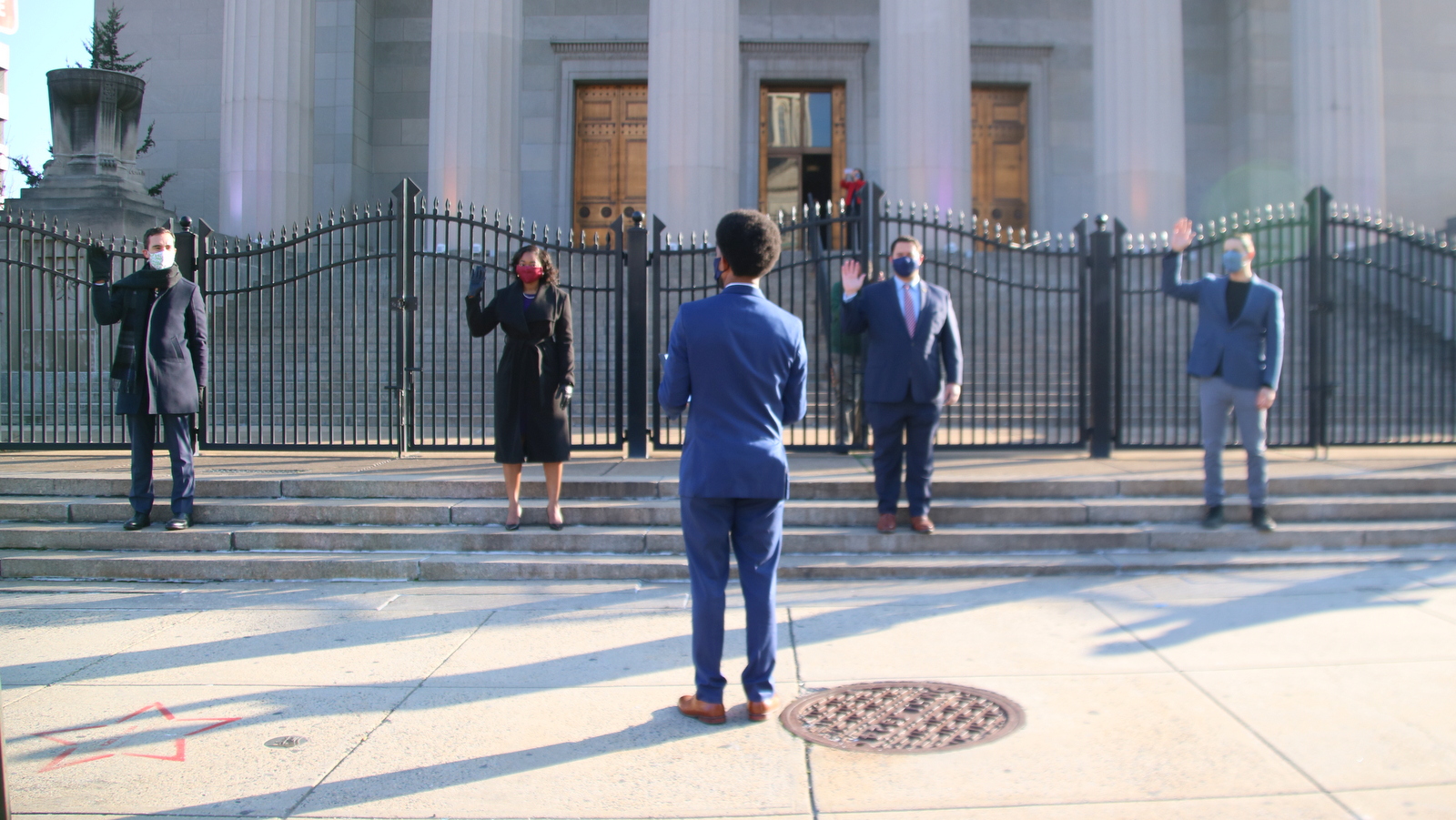 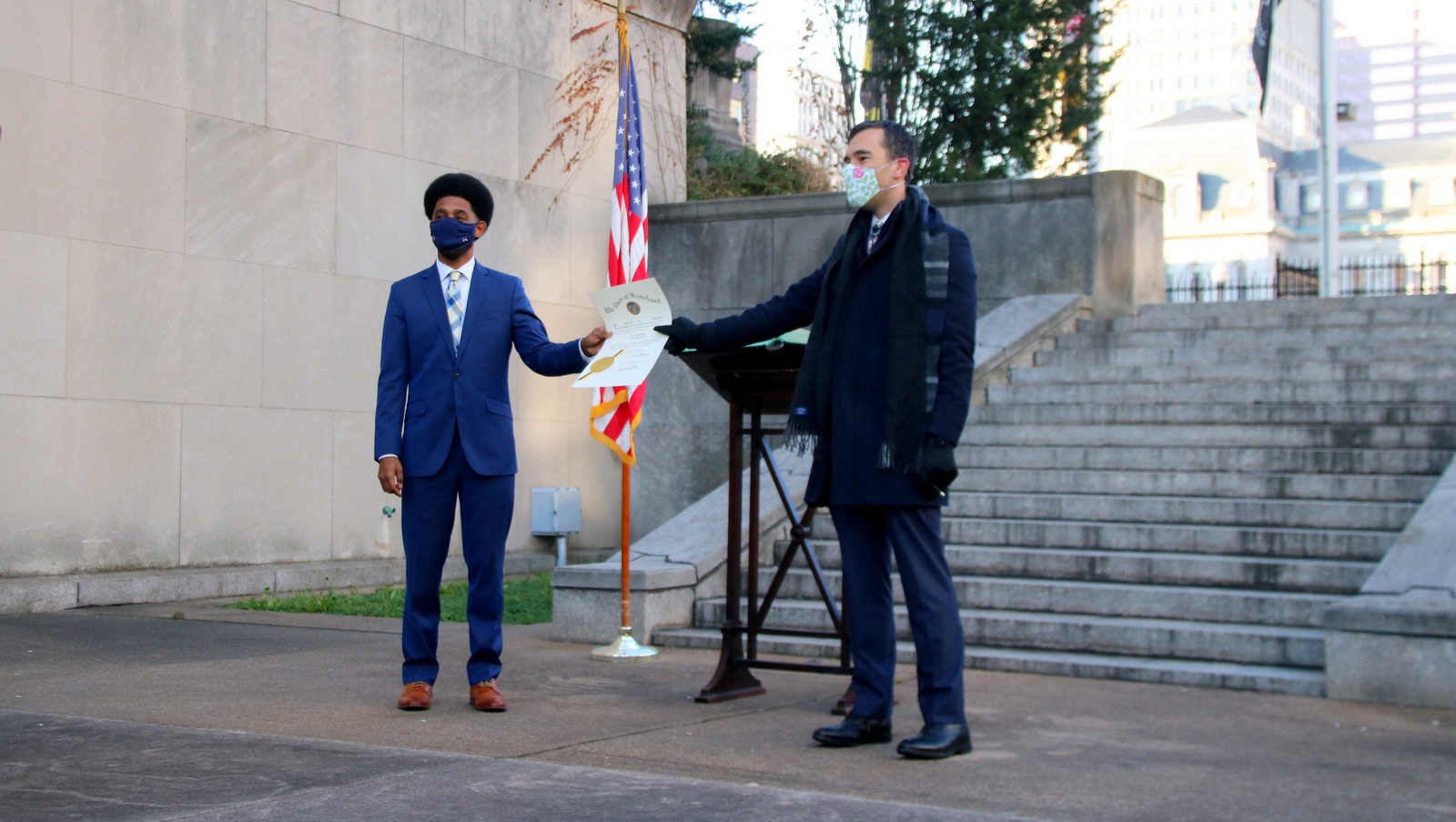 A sunnier spot was reserved for Mosby and the five newly elected members of the Council – Mark Conway, Odette Ramos, James Torrence, Antonio Glover and Phylicia Porter. Along with Comptroller Bill Henry, they stood on a stage on the grassy plaza.

Scott swore them in, and Mosby gave his speech from a plexiglass lectern emblazoned with the inaugural logo.

Besides the media, spectators consisted of a smattering of passersby, police officers and homeless people who were wrapped in or resting under blankets.

On Tuesday, Scott had been sworn in on the other side of Memorial Plaza, inside City Hall.

He then addressed the media outside the building, where his remarks were filmed by the city’s cable channel, CharmTV.

Mosby’s speech, by contrast, was filmed by the private production company Storyfarm, which combined it with other footage for a video that was then provided to CharmTV for broadcast.

The video includes footage of a singer in a Baltimore neighborhood performing “Lift Every Voice and Sing” while a troupe of dancers perform behind him. There’s a violinist performing in Union Square and clips showing Council members making remarks from prominent locations in their districts.

Mosby’s spokeswoman, Yvonne Wenger, said the nearly four-minute video was paid for using funds raised for the inauguration and that no public money was used.

She declined to provide the cost of the video but said the 501(c)4 inauguration entity would disclose contributions “through the official filing process.”

Wenger said about $30,000 was raised for the inaugural events and that the funding process used “was common for inaugurations.”

Wenger didn’t say why a private company was hired rather than using CharmTV’s production staff.

She described their product as an uplifting celebration amid Covid-19.

“The video highlighted kids from across the city and gave the entire incoming City Council an opportunity to showcase iconic businesses, beautiful city visas, historic landmarks and everyday Baltimore residents in their districts,” she said in a written release.

She also pointed to the virtual watch parties and social media platforms the inauguration committee has been plugging about the event for days.

“The video was an opportunity to connect and engage the public virtually,” she said, “as the surging coronavirus pandemic makes it unsafe for people to gather together in celebration.”

During the primary season, Mosby’s campaign committee paid Storyfarm $26,100 for videos and “media consulting,” according to finance reports on file with the state.

In his speech, Mosby spoke of his commitment to helping Baltimore through its fiscal challenges, citing the coronavirus, an unemployment rate that exceeded 10% last month and the city’s $14.9 million deficit.

“We don’t need to have a dollar to waste,” he said. 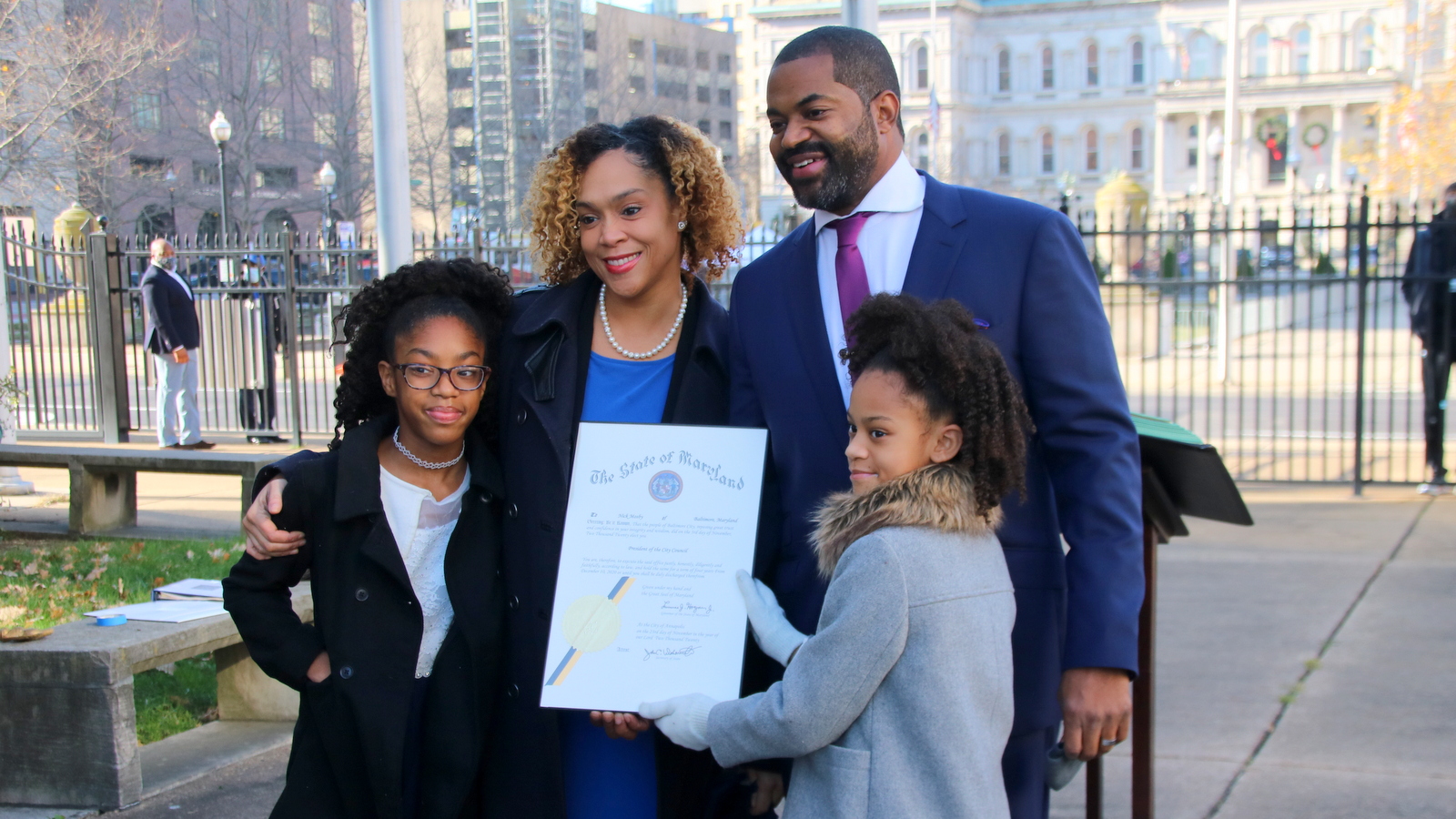 But he also described himself as a person who could succeed in leading a challenged city because of his own struggles.

“I know what it’s like to not have enough and to desperately want more,” he said.

– Mark Reutter contributed to this story.