The campaign committee of Baltimore State’s Attorney Marilyn Mosby paid the law firm that represented Mosby in the investigation of her travel and private companies by the city inspector general.

A $3,250 check to the local law firm, Kramon & Graham, came a month after two of its principals, Andrew Jay Graham and David J. Shuster, were retained by Mosby as her private legal counsel.

On September 20, Mosby’s campaign committee, Friends of Marilyn Mosby, issued the payment to Kramon & Graham for “legal fees – general,” according to its annual filing with the State Board of Elections.

The report was signed under penalty of perjury by Mosby, who chairs the committee, and Sharif J. Small, treasurer.

Maryland law broadly bans the use of campaign funds for “the personal use or the personal benefit of a candidate.”

Specifically, Chapter 33.13.10.03 (“Prohibited Expenditures”) of the Code of Maryland Regulations forbids campaign committees to pay the “legal defense costs or expenses” of a candidate unless they relate to an “investigation or legal action resulting from the conduct of the campaign or election.”

The law also prohibits the use of campaign funds for expenses “related to the necessary and ordinary course of holding office,” expenses “relating to travel outside the country,” and mortgage, rent, utilities and other personal costs that would occur regardless of whether an individual held public office. 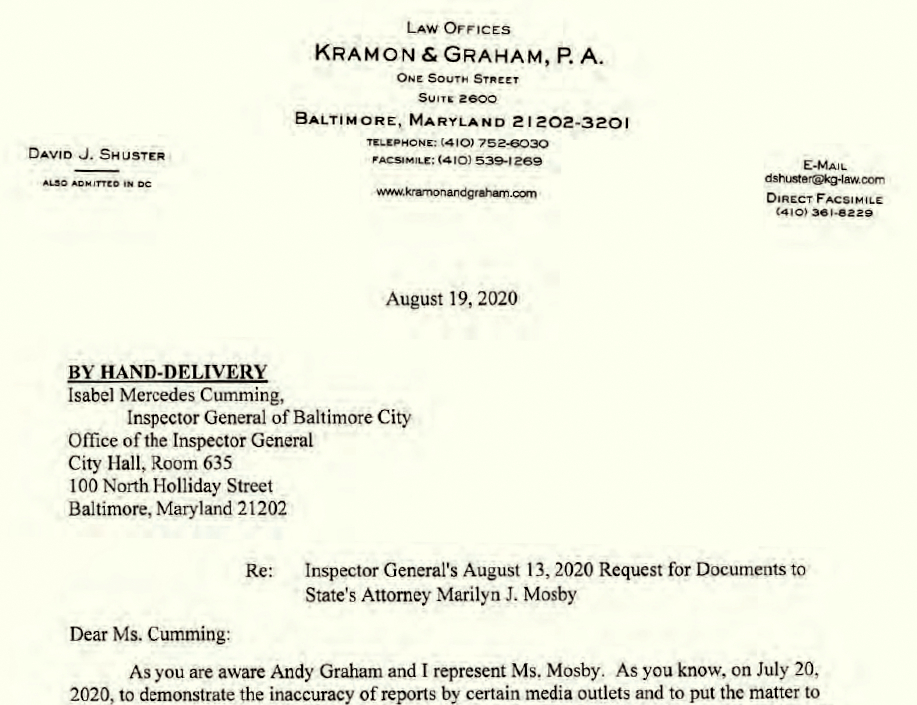 The August 2020 letter disclosing that Andrew Graham and David Shuster are representing Mosby in the IG investigation. BELOW: The campaign’s payment to the law firm. (OIG Report 21-0008-I, February 9, 2021; Friends of Marilyn Mosby Finance Report, January 20, 2021)

Neither Graham nor Shuster list election law or campaign finance as among their practice areas (here and here).

The IG investigation was not concerned with Mosby’s 2018 re-election campaign, but instead focused on the state’s attorney’s travels, gifts and private business activities in 2019.

Graham is a former federal prosecutor who led the successful defense of Baltimore Police Officer Caesar Goodson Jr., who faced murder charges leveled by Mosby’s office after the 2015 death of Freddie Gray.

In a letter citing The Brew’s reporting, Cabezas said, “I feel absolutely certain that Baltimore City State’s Attorney Marylin Mosby is prohibited from using monies from her campaign fund known as Friends of Marilyn Mosby.”
__________________________
Shuster describes himself as a commercial litigator who represents clients in “high-stakes business and real-estate litigation,” especially in “highly sensitive matters where reputational management is crucial.”

Shuster and Graham, as well as Mosby and her campaign treasurer, have not yet responded to an email request for comment on the $3,250 payment.

The IG investigation was requested by Mosby herself last July after the Baltimore Brew wrote about her frequent out-of-town trips and many gifts received while Baltimore’s top prosecutor.

The article further disclosed that Mosby had established three travel and consulting businesses in May 2019 that were not disclosed on her state ethics form until July 2020 after this website reviewed the form.

• Did not properly disclose her overseas travel to the Board of Estimates.

• Did not donate some gifted items to an office auction, as her spokesman claimed she had done.

• Used her “Mahogany Elite” businesses to make tax deductions and pay for airplane tickets for herself and her husband, then state delegate and now City Council President Nick Mosby.

Since the report’s issuance, Graham and Shuster have vigorously contested the findings.

On Friday, they circulated to some media organizations a letter denouncing the IG report as misleading and “a frustrating and unnecessary chapter in our client’s professional life.”

The letter objected to the report’s findings about her trips, including to a previously-undisclosed conference at a Virginia spa. Graham and Shuster said Mosby had inadvertently omitted the three-day conference from her state ethics report.

They defended the conference, sponsored by the Vera Institute of Justice, as an opportunity for Mosby “to share ideas and discuss strategies for dealing with the unique challenges that they face as African-American female prosecutors, including harassment, intimidation and threats against them.”

“Mrs. Mosby demands that you correct your Report to fix the misstatements and inaccuracies outlined above,” the letter concludes.