A statement was issued tonight by Marilyn Mosby’s political committee regarding the use of campaign money to pay for private attorneys to represent Mosby in a probe of her travel and business activities while state’s attorney.

Maryland law prohibits political committees from using funds to pay for the legal costs of an officeholder unless those costs involve “the conduct of the campaign or election.”

The Brew reported earlier today that Friends of Marilyn Mosby paid $3,250 to lawyers hired by Mosby to defend herself in an investigation by Baltimore’s inspector general. That investigation resulted in a report issued last week that was sharply critical of Mosby’s activities.

Tonight’s statement says that Mosby, who was re-elected Baltimore state’s attorney in 2018, believed that a July 16, 2020 Brew story about her extensive travels and three private businesses was “a threat to her electoral viability.”

“Once the scope of the investigation evolved and expanded, it became increasingly clear that it was a legal matter that encompassed more than her electoral viability, which is why she ceased using campaign funds.”

The statement says Mosby “sought advice from the State Board of Elections and the State Ethics Commission to establish an appropriate mechanism to set up a legal defense fund for the tens of thousands of dollars in additional costs.”

It is unclear whether a legal defense has been established. There is no evidence of a fund or fundraising on the state’s attorney’s campaign website, www.marilynmosby.com.

Mosby and her attorneys did not respond to questions today. Nor did her campaign treasurer, Sharif J. Small.

Cabezas said that she is prohibited by law from using the funds for her private legal defense.

Tonight’s statement by Mosby’s campaign said that “there was never an intent to mislead, which is why she reported the initial expense of $3,250 in her routine campaign finance disclosures.” 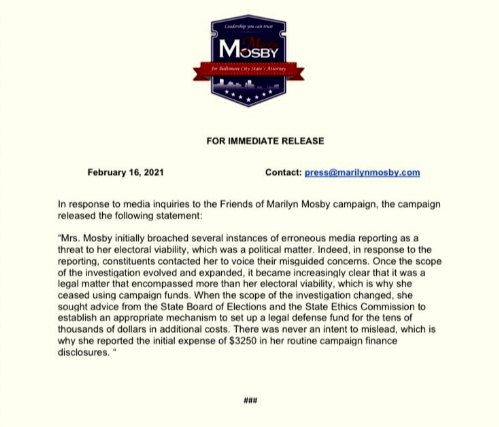