After lengthy remarks suggesting that the Scott administration was “overly punitive” to a Black businessman, City Council President Nick Mosby found himself alone today when the Board of Estimates voted to terminate a contract with Universal Towing LLC.

The Scott administration suspended the company based on Cumming’s findings that it had disregarded police instructions to drop off the vehicles at a city lot and failed to run proper VIN checks on the vehicles.

The complaint came from the National Insurance Crime Bureau and Baltimore Police’s Regional Auto Theft Team and was not generated by the IG.

A year before, the inspector general confirmed another complaint that Universal Towing had submitted false subcontractor payments to appear to be in compliance with the city’s minority- and women-owned business goals.

Then came the IG report on the travels and private businesses of Mosby’s wife, Baltimore State’s Attorney Marilyn J. Mosby.

Some of the findings from that investigation, which Mosby had herself requested, infuriated the couple. Soon the Baltimore Chapter of the NAACP, together with Universal Towing’s attorney, was calling for “equity in investigations” by the inspector general.

Today, without specifically mentioning the mayor or the inspector general by name, Mosby questioned the reasons for terminating the contract.

“Why this particular vendor?” Mosby wondered after Universal Towing owner Malik Stuckey and his attorney had completed a long Q & A session over arcane aspects of towing regulations.

“My position is the timing is irrelevant,” Corley replied. “If we were not to take any action, we would be condoning the behavior, which does not deter [others] from the taking future actions like this.” 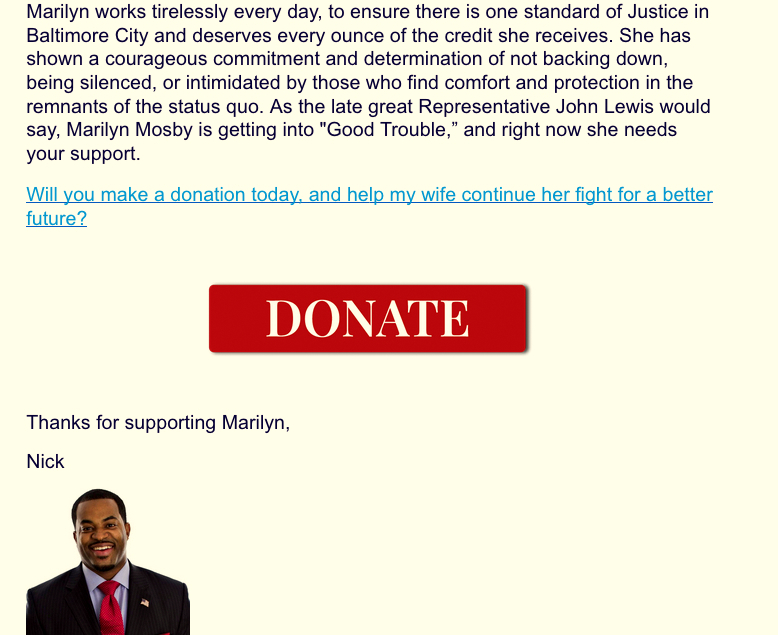 Nick Mosby defends his wife in a February 24 fundraising letter that followed the IG report. (Friends of Marilyn Mosby)

They were joined by Scott and Comptroller Bill Henry in the 4-1 vote terminating Universal’s contract.

The termination does not bar the company from bidding on future towing contracts.