Rumors had been swirling for days that federal investigators had come to the City Hall office of Council President Nick Mosby and had approached his wife, State’s Attorney Marilyn Mosby, at the couple’s Reservoir Hill home.

Several local churches, in which the Mosbys had reportedly taken tax write-offs, also were reportedly visited by FBI agents.

A grand jury subpoena seeking her campaign and the couple’s business records was first disclosed by the Baltimore Sun and later confirmed by The Brew.

The scope of the subpoenas – tax returns, bank statements, campaign reports, canceled checks, spreadsheets, phone contacts and more – shows that the U.S. Attorney’s Office is looking at many aspects of the Mosbys’ dealings that were first disclosed by Brew reporting last summer and have continued as recently as this Wednesday.

In July, The Brew’s Mark Reutter and Ian Round began looking at the frequent travel by Marilyn Mosby. They confirmed that she had taken numerous trips out of town and around the world, including to Germany, Portugal, Kenya and Scotland.

In 2018 and 2019, when the city was reeling from crime and with annual homicide tolls topping 300 people, Baltimore’s top prosecutor had been away on sponsored trips for 85 work days, we reported.

The Brew also found that Mosby had created a side business – Mahogany Elite Enterprises LLC, plus two subsidiaries, Mahogany Elite Consulting and Mahogany Elite Travel – that had not been disclosed to the Maryland Ethics Commission until after the reporters began reviewing her records.

That article would be the first of a series of investigative reports about the couple, including a look at an obscure consulting business, Monumental Squared LLC, set up by Nick Mosby. The other stories can be read here: 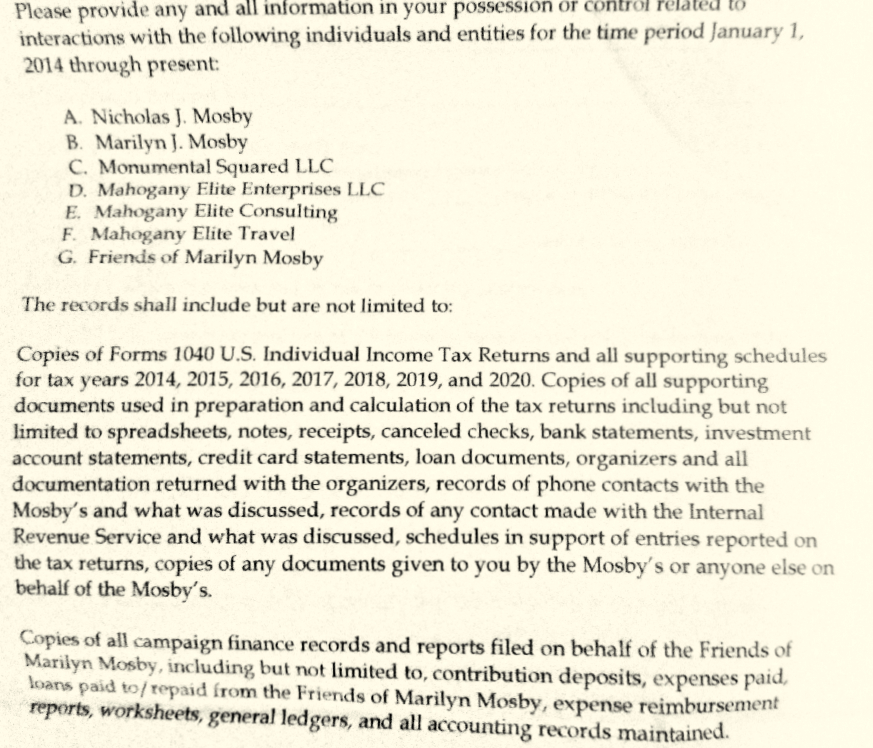 The couple’s lawyer, A. Scott Bolden, today confirmed that federal agents had entered City Hall, saying in an online media appearance that they “tried to serve Nick Mosby [with a subpoena] while he was doing his job as chair of the Board of Estimates. It was embarrassing.”

Bolden was apparently referring to the March 10 BOE meeting. Mosby presides over the Wednesday morning meetings where millions of dollars of spending are typically approved by the panel.

For the March 10 virtual meeting via Webex, Mosby appears to be stationed in the City Council chambers, while Mayor Brandon Scott, Comptroller Bill Henry and two other board members are in their separate offices.

Mosby ends the meeting by urging Scott to delay advertising for this year’s tax sale, saying he was representing citizens suffering from the economic and emotional hardships of the Covid pandemic. Bolden did not offer more information on the Roland Martin Unfiltered digital show (the segment starts at 3:00 and the BOE incident is at 8:25).

In a later statement, the lawyer described the Mosbys as “progressive change agents, making them unfair targets of unnecessary scrutiny by federal investigators. Nevertheless, I can assure you and the people of Baltimore, they have done nothing illegal, inappropriate or unlawful. This is a political witch hunt in its purest form, and both of them will vigorously and fully defend themselves.”

“They have done nothing illegal, inappropriate or unlawful. This is a political witch hunt in its purest form.” – Mosbys’ attorney.

He continued, “As they’ve done with every other baseless charge and investigation lodged against them, they have every intent to fully cooperate with the investigation, to fight for the truth to come out, while continuing to fight for the citizens of a city that both love and are blessed to serve.”

Saying she was confident the IG would confirm that she had been fully ethical and transparent in her activities, Mosby complained in a public announcement that “the misleading and erroneous statements in the Baltimore Brew article and subsequent Fox45 stories” had caused public confusion and reputational damage to her.

The IG report also revealed that Mosby had used Mahogany Elite to deduct $5,000 in federal income taxes while reporting that the company was not active and had earned no income.

She further used the LLC to pay for plane travel for Nick Mosby, even though he was not an employee of her business. Attempts by the IG to review the Mosbys’ 2018 tax returns were rebuffed. (Earlier, the Baltimore Sun and Fox45  reported that the IRS has filed a lien against the Mosbys for $45,000 of unpaid back taxes.)

The IG report caused a storm of criticism from Mosby allies, the Baltimore NAACP and her private attorneys – who, The Brew reported, were paid $3,250 in legal fees by Mosby’s campaign fund.

Maryland election law says campaign funds can be used only to pay for legal issues arising from a political campaign (Mosby is not up for reelection until 2022).

In a second apparent violation of the same law, we reported this week that another $11,000 from Mosby’s campaign account was used to pay a Washington law firm that acted on her personal behalf to write a cease-and desist-letter to a former employee.