Baltimore State’s Attorney Marilyn J. Mosby used an amendment made to her 2019 state financial disclosure statement as an occasion to again declare, “I have done nothing wrong.”

Mosby and her husband, Baltimore City Council President Nick Mosby, are under a federal investigation that appears to be centered on the couple’s private businesses, campaign finances and charitable donations, judging by subpoenas that have been issued by a Baltimore grand jury.

It changes her original statement to say that she returned three gifts that were intended to be auctioned at a benefit for crime victims, but were not. The gifts included candles worth $25, $50 of hair oil, and $188 in cannabis products from an Oregon company.

Among the trips listed today was one taken by Mosby in August 2019 to join other Black female prosecutors at a Virginia spa resort.

The three-day retreat – underwritten by the Vera Institute of Justice with auto transportation provided by Baltimore Police’s Executive Protection Unit to and from the spa – was first disclosed in Cumming’s report.

Today’s press release was issued by the state’s attorney’s office and emblazoned with its official seal. It noted that the retreat and other trips were not required to be reported under the ethics law because they were paid for by nonprofits or by labor organizations that did not do business with the state.

The press release asserts that Mosby “over-reported” her work travel, and “the State Ethics Commission did not report any evidence of wrongdoing or illegality in travel or gifts.”

This statement misrepresents the spirit of the ethics law and the role played by the commission.

The law does not establish “wrongdoing,” and the commission does not dole out punishment. Instead, the commission calls on officeholders to submit amendments when questions arise over compliance with the law’s requirements. 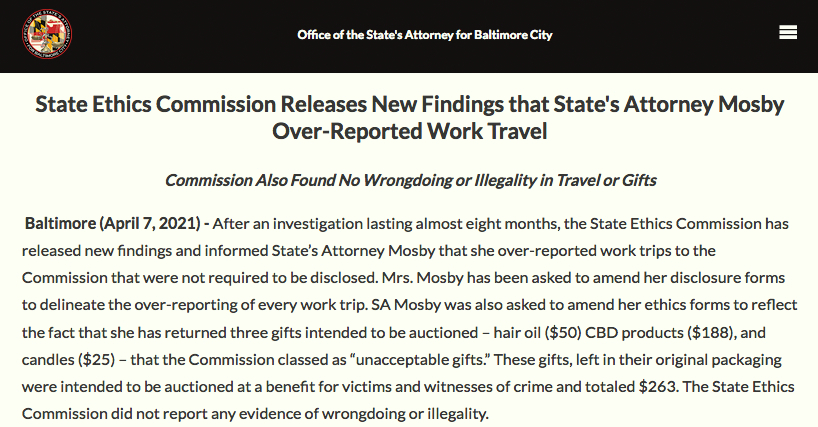 From the press release issued today by Mosby’s office.

Attempts to reach the commission were unsuccessful.

4/8/21 UPDATE: The State Ethics Commission confirmed that it does not clear public officials of wrongdoing or illegality.

Jennifer K. Allgair, the executive director, issued a statement to The Brew noting that Mosby’s amendments to her ethics report “provide information that is required to be disclosed under the financial disclosure provisions of the Public Ethics Law. . . the State Ethics Commission does not provide any comment on, or confirmation of, any advice request or investigation matter.”

None of the material filed today appears to bear on the investigation by the U.S. Attorney’s Office in Maryland, which served subpoenas on the Mosbys last month as well as on a number of other parties, including at least three local churches.

The Mosbys’ attorney, A. Scott Bolden, has called the federal investigation a “smear campaign” and “political witch hunt” driven by the “genuine animus” of two prosecutors.

While not commenting directly on the Mosby case, Acting U.S. Attorney Jonathan Lenzner last week said “our record over the years has proven that” investigations are conducted with “utmost integrity.”

Today, the Mosby press release took aim at this website, incorrectly saying that The Brew has “accused Mosby of pocketing $30,000 in travel reimbursements.”

The article, published last July, relied on Mosby’s own reports to the Ethics Commission to describe the extended time – 85 work days – she had spent at out-of-state conferences and on trips sponsored by criminal justice advocacy groups.

The story stirred controversy, with some defending Mosby’s travel as appropriate for her professional needs, and others questioning her time out of the office as excessive.

The original article also noted that Mosby had formed a travel and consulting company that was not disclosed on her ethics statement until after The Brew began examining the statement.

Mosby blamed the tardy disclosure on an oversight by a since-departed chief of staff. The company’s purpose was to serve as a “long-term venture” to “help underserved Black families. . . have the opportunity to travel outside of urban cities.”

A spokesperson said the company was not active, and Mosby had “not received a single cent in revenue.”

The Brew has since reported that Mosby had acquired, in her name, two houses in Florida for a combined $1 million (here and here).

In her statement today, Mosby said:

“I will continue to ignore the incessant politically-motivated attempts to bring me down and will continue to keep my focus on building a more fair and equitable justice system in the city of Baltimore.”