The Scott administration has issued revised rules that would require Baltimore State’s Attorney Marilyn Mosby and other elected officials to secure approval for future out-of-town travel regardless of who pays for their trips.

Under administrative changes headed for the Board of Estimates tomorrow, officials whose work-related travel expenses exceed $100 (if paid for by a third party) or $800 (if paid for jointly by the city and a third party) would be required to disclose their trips and request board approval.

5/19 UPDATE: The Brew has learned that Council President Nick Mosby was the board member who requested that the BOE defer today’s vote on the travel policy. Board Secretary Bill Henry announced the item will be deferred to the BOE’s June 2 meeting.

The deferral came just before Mayor Brandon Scott issued a public announcement about the revised rules, quoting City Solicitor Jim Shea praising them as “consistent with Mayor Scott’s pledge to bring transparency and accountability to city government.” The press release said the rules “will be considered by the Board of Estimates at an upcoming meeting.”

Overseas travel and trips that take an elected official “outside the city for seven or more consecutive days” would also require prior approval.

Travel for political purposes and personal travel are excluded from BOE review, but trips paid in part or whole by private sponsors should be disclosed on an official’s yearly ethics form as “gifts.”

Failure to file timely notice of work-related travel, including the cost and purpose of the trip and the identity of any third-party payer, would result in a letter of reprimand by the Board of Estimates.

“Subsequent failures in the same calendar year shall result in fines starting at $100 and increasing by $100 for each successive failure to disclose,” says the proposed revisions.

Seizing upon a preliminary finding by the city solicitor that the travel rules for elected officials were ambiguous, Mosby said she was the victim of bias and unfair accusations.

“It is deeply disturbing that the Inspector General has publicly criticized me,” Mosby said in a press release, while her husband penned a fundraising letter saying his wife was being “drug through the sand” by “remnants of the status quo.”

According to Mosby, she did not have to disclose her trips to Kenya and Scotland – as well as a two-week sojourn to Germany and Portugal – to the BOE because city taxpayers did not foot the bill.

Her stay at the Great Rift Valley Resort was paid for by the United Nations Office on Drugs and Crime and Fair and Just Prosecution, a criminal justice nonprofit.

Fair and Just Prosecution also picked up her tab while she was in Germany and Portugal, studying prison reform, and in Scotland, attending a “court innovation” conference.

In addition to these trips, Mosby attended business conferences and events – not reported to the BOE – in Alabama, Arizona, California, Georgia, Illinois, Louisiana, Massachusetts, Minnesota, New York, North Carolina, Tennessee, Texas, Virginia and Wisconsin in 2018 and 2019. 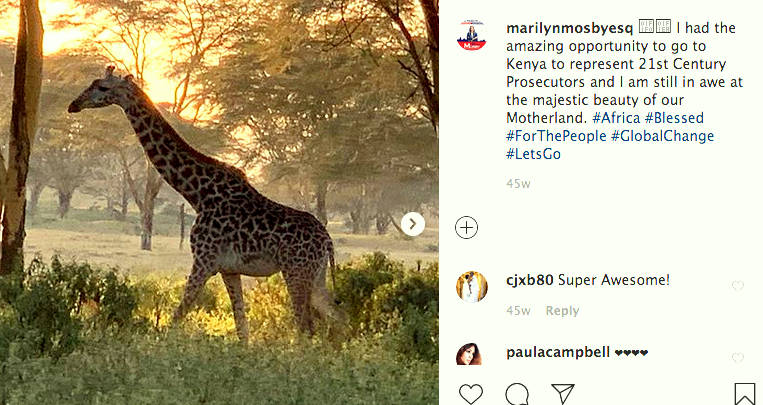 Mosby shared a photo of a giraffe while attending a conference at the Great Rift Valley Resort in Kenya. (@MarilyMosbyEsq)

The travel revisions to the Administrative Manual are the result of concern about the clarity of guidance for elected officials, according to the Department of Human Resources.

“The city’s interests are best served when guidelines and expectations pertaining to travel duties and responsibility are clearly set forth for all city officials and employees,” it says in this week’s BOE agenda.

For years, non-elected salaried employees had to seek BOE approval for business travel, regardless of who sponsors the trips. In this week’s agenda, for example, two members of Mosby’s office ask for nearly $3,000 in retroactive pay to cover victim assistance training sessions they attended in Jacksonville, Florida.

Last summer, The Brew reported that Mosby took 23 out-of-town trips while state’s attorney in 2018 and 2019, speaking at conferences and special events while accepting $30,000 in travel reimbursements from her sponsors.

“The people of Baltimore have endured far too many corruption scandals and need to know what is and is not illegal,” she stated in a letter to the IG.

After the report was released, Mosby disputed the IG’s findings that she did not properly disclose her travels and had used one of her companies to write off travel expenses for herself and her husband, then a state delegate.

Elected president of the City Council in November, Nick Mosby now sits on the Board of Estimates that will act on the revised travel rules at its meeting tomorrow.

Typically, he abstains from voting on items related to his wife’s office.