The Board of Estimates reassembled at noon today to vote on spending items it had approved hours earlier at a virtual meeting that the public could not access in possible violation of Maryland’s Open Meetings Act.

The law allows public bodies to meet virtually during the pandemic, but says the public must be given access either via a call-in number or a meeting room with a speakerphone.

The Webex public access code listed on the board’s agenda didn’t work, leading to objections by citizens and members of the media while the meeting continued for another half an hour. 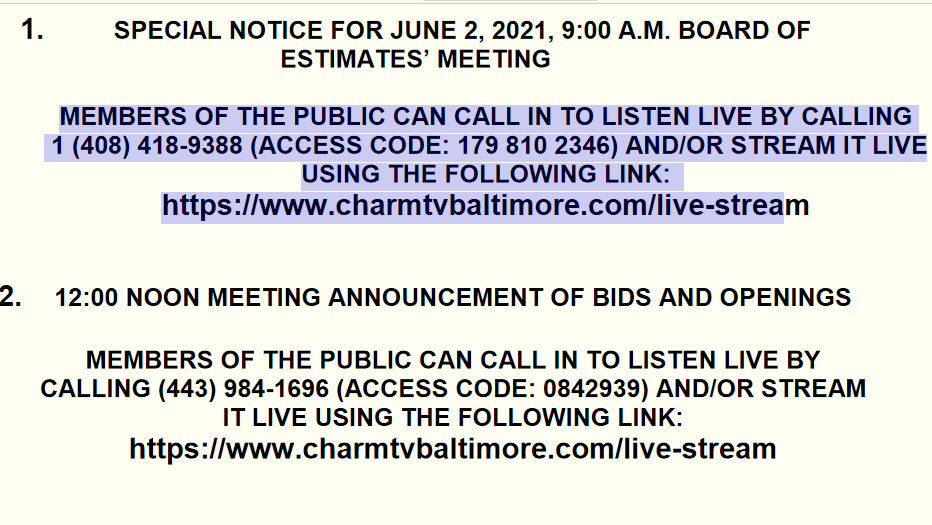 The usual live-stream and Webex links were provided in the June 2 BOE agenda, but today they did not work.

When Henry, the board’s secretary, realized that the meeting wasn’t being live-streamed, he decided to use a 12 noon bid opening to repeat the actions taken by the board as CharmTV captured his every word.

The city-owned cable station hasn’t responded to questions about why the morning meeting wasn’t broadcast.

Mosby’s office failed to say why the Webex access code failed, and a deputy city solicitor skirted around the issue of whether the gathering violated the Open Meetings Act.

Henry, however, promised that the morning session will be posted on CharmTV’s website within the next 24 hours.