This coming week Scott had been scheduled to go to Philadelphia, accompanied by three top aides, to hear about private-public partnerships and to tour city neighborhoods.

But the mayor’s plan to attend the October 13-15 “Chesapeake Connect” conference was derailed by his positive Covid test on Monday.

Instead, he is self-isolating and will work remotely from his Northeast Baltimore home until October 15, according to his deputy director of communications, Stefanie Mavronis.

“Out of an abundance of caution, he will be tested again prior to returning to in-person meetings,” she added.

On Wednesday, the Board of Estimates approved $4,500 in travel allowances for City Administrator Christopher Shorter, Chief of Staff Michael Huber and Deputy Mayor Faith P. Leach to attend the conference.

Also scheduled to attend is Colin Tarbert, CEO of the Baltimore Development Corp. His expenses have not yet been submitted to the Board of Estimates.

The trip was organized by the Baltimore Metropolitan Council, a nonprofit established by the Maryland legislature to coordinate regional transportation, workforce development and other tasks.

The three-day event is billed as helping local leaders learn firsthand  “about the wins, pitfalls and works in progress that define the City of Brotherly Love,” according to the conference’s itinerary. 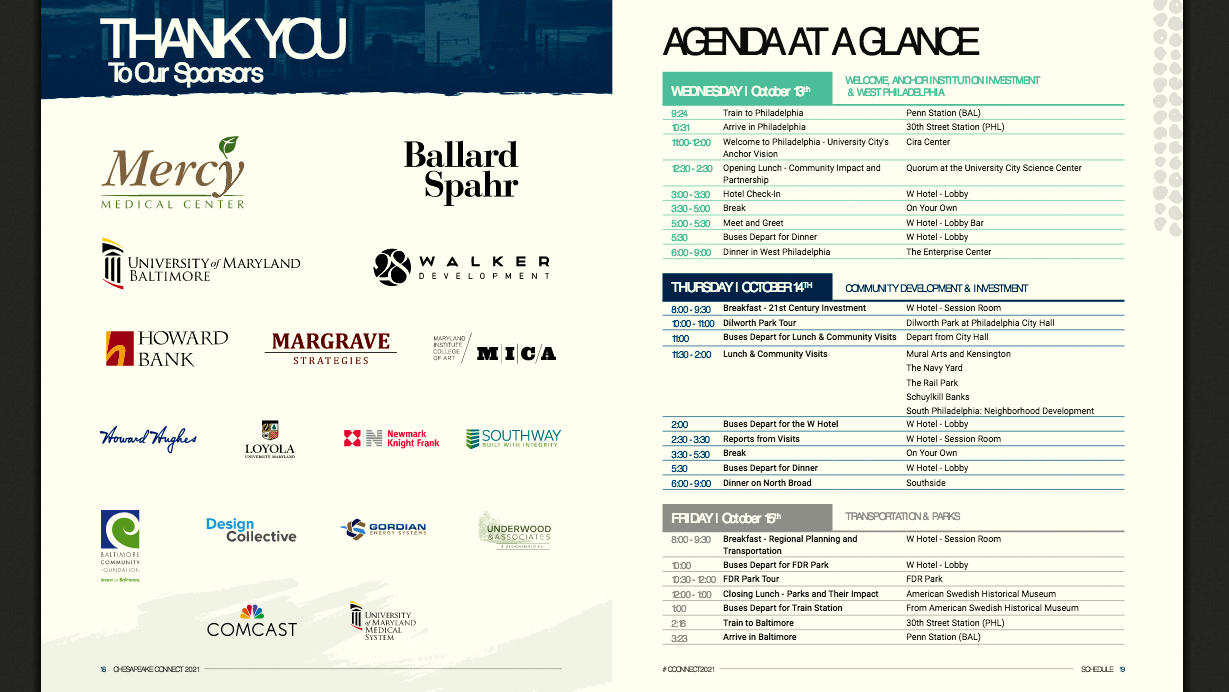 The sponsors and agenda of the conference that the mayor’s three aides will attend. (Chesapeake Connect)

Conference attendees, including representatives from Baltimore’s real estate, legal and nonprofit worlds, are scheduled to motor north or jump onto the Acela Express next Wednesday for the trip to Philadelphia and two nights at the boutique W Hotel in the Center City district.

“I’m looking forward to the trip,” says another participant, Maryland Senate President Bill Ferguson (D., 46th). “It’s an incredible opportunity to learn from what works in other cities and regions.”

According to the Metropolitan Council, the objectives of the conference are two-fold:

“First, the trip provides an insider’s perspective on the strengths and struggles of a peer metropolitan area. Second, the experience is a forum for civic-minded leaders from the Baltimore region to strengthen and expand their own networks and relationships.”

Below, the conference’s opening night event: 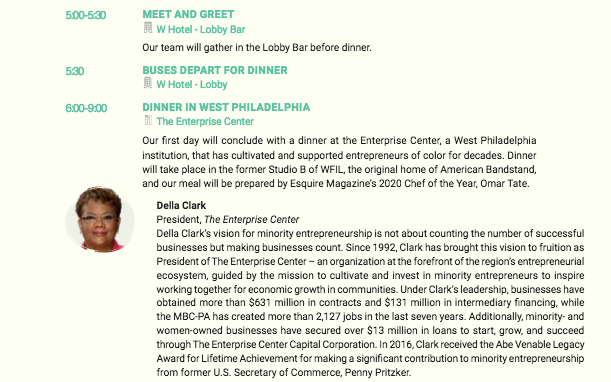