The grass and weeds and rubble that separate Reservoir Hill from Bolton Hill along North Avenue may soon show flickers of activity as another bureaucratic hurdle is surmounted.

The Board of Estimates today approved the sale of air rights to developers MCB Real Estate and MLR Partners, trading as Madison Park North LLC, who recently secured approval to build 120 townhouses on the 8.2-acre site.

High hopes accompany the sale by those who believe the project will help trigger private investment along long-neglected North Avenue.

“Madison Park North gives us a vision on how to revitalize the rest of the corridor,” according to 7th District Councilman James Torrence.

“It will build up density and help close a food desert in West Baltimore. It will bring more walkability to Reservoir Hill. And it is resident-led,” Torrence said, stressing that the lead developer, P. David Bramble of MCB Real Estate, is a community resident.

Growing up in nearby Madison Park – and now raising his family there – Bramble said the project, one of several ventures his firm is pursuing in the city, is closest to his heart.

“It’s time to show that we can do these kind of big projects in our neighborhoods, outside of downtown and beyond the harborfront,” he told The Brew yesterday. “This particular project is so important for the city – true neighborhood development.” 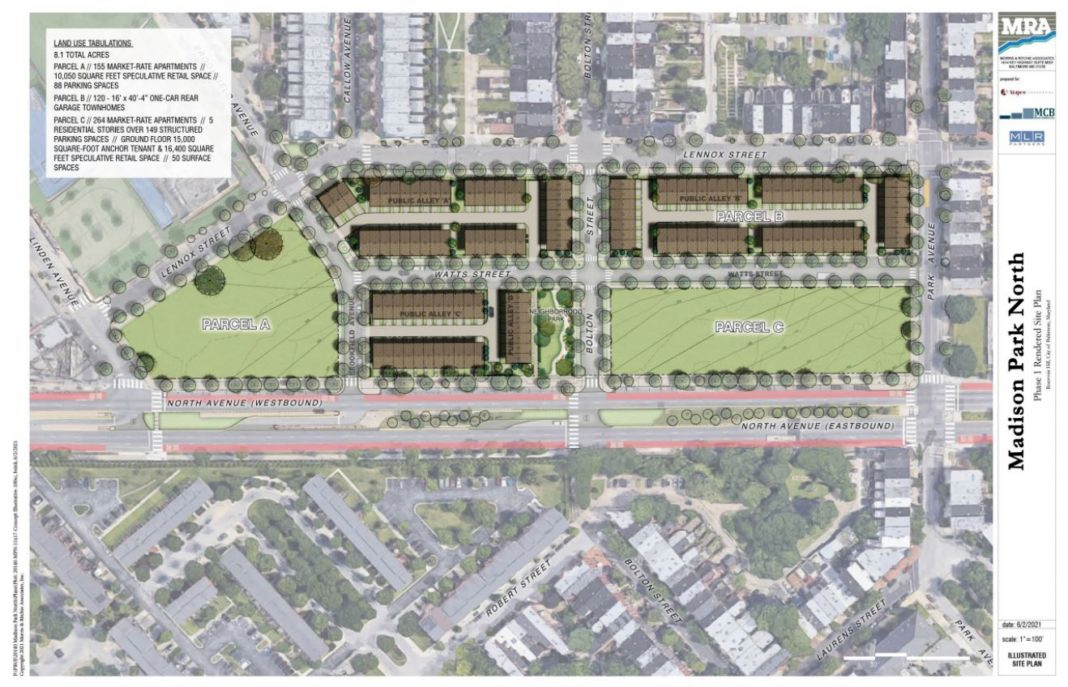 The current plan, with 120 townhouses for Parcel B (in brown) along Lennox and Watts streets. Parcels A and C are expected to include mid-rise apartments, some retail and a grocery store along North Avenue. (Madison Park North LLC)

Delays Above Ground and Below

The air rights, to be sold for a nominal $40,000, stemmed from the city’s worry, some 50 years ago, that private developers would place high-rise apartments along this stretch of North Avenue between Park and Linden avenues.

Instead, the resulting 202-unit apartment project, subsidized by federal dollars and owned by out-of-state investors, devolved into rundown compound dubbed “Murder Mall” before it was finally torn down in 2017.

When the city first revoked the landlord’s license in 2010, residents acknowledged the severe safety problems, but many told The Brew they were opposed to a solution that displaced them.

“If we had money, we wouldn’t even be here in the first place. There’s no way we can just pack up our kids and go,” resident Crystal Jackson said at the time. “It’s not fair. What are we supposed to do?” 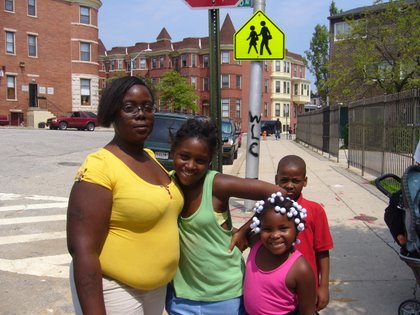 Madison Park North resident Crystal Jackson is pictured with her children in 2010 on Lennox Street near the location of this story’s lead photo. She and her family were displaced when the project was razed. (Giselle Chang)

Bramble, his partner Peter M. Pinkard and MLR’s Mark Renbaum came forward with a plan unlike any proposed for West Baltimore in the wake of the Uprising following Freddie Gray’s death in police custody.

They said they would build between 300 and 500 mixed-income apartments, several blocks of market-rate townhouses, a grocery store, retail outlets, and a 50,000-square-foot hub for tech companies and local entrepreneurs.

The plan: Fashioning a middle-class, amenity-rich enclave in a resource-poor district.

In effect, the developers wanted to plop down a middle-class, amenity-rich enclave in a resource-poor district.

What few knew then, however, was that in addition to air rights and other urban renewal hindrances, the property was encumbered by underground property rights secured years before by the Pennsylvania Railroad and inherited by Amtrak.

“The city knew about it when they did the urban renewal ordinances back in the day,” Bramble said. “They were trying to deal with it, but they never did.” 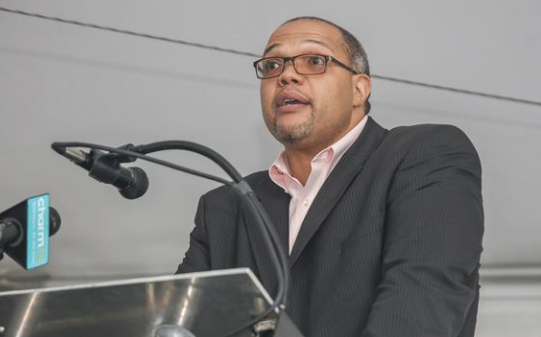 The subterranean rights stemmed from plans to build a second railroad tunnel to replace the 1873 Baltimore & Potomac Tunnel, a notorious bottleneck for Northeast Corridor trains.

While not sitting directly above the proposed new bore, Madison Park North was close enough for Amtrak to retain its property rights so that the land could not be transferred and development proceed.

An obstacle: Amtrak, who says it will transfer ownership of underground property rights to the developer.

Asked for an update yesterday, Amtrak spokeswoman Beth Toll suggested that Bramble’s long wait is coming to an end.

“We are working to transfer ownership of Amtrak’s subsurface property rights to the developer,” she said in an emailed response.  She did not offer a timeline of when the transfer might take place.

Once unencumbered by Amtrak, the eight-acre site is expected to be sold to Bramble’s group by Tri-Cap Management, the Beverly Hills-based owners of the demolished apartment complex.

A year ago, he predicted that ground would be broken in the final quarter of 2021. Now he’s hoping to start sitework for phase 1, the townhouse construction, during the first quarter of 2022.

Gone is the tech hub. Proposed office space has also been impacted by the shift toward working at home caused by the Covid pandemic.

For phases 2 and 3, the development team hopes to add midrise apartments, a grocery store and some neighborhood-oriented “retail frontage” to the mix.

The fact that the project is designated as a federal Opportunity Zone, with resultant tax breaks for investors, should attract private dollars, Bramble says. 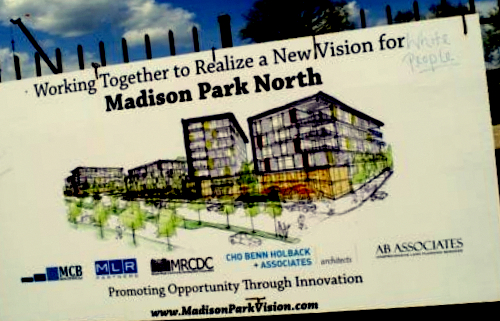 A sign ballyhooing the proposed project – “Working Together to Realize a New Vision for” – has “White People” scrawled in the margin. (Mark Reutter, photo taken in 2018)

MCB Real Estate has been moving actively into city real estate after years of investing in suburban shopping centers and commercial property.

The company is involved in Yard 56, opposite Johns Hopkins Bayview Medical Center on Eastern Avenue, that has transformed the site of an abandoned enamel factory into a lively commercial center, anchored by a LA Fitness gym and Streets Market.

A hotel, apartments and a medical building are on tap.

MCB owns The Can Company in Canton and recently purchased the historic Tractor Building in Woodbury from investor Larry Jennings.

With partner Mark Renbaum, it is converting the fading Northwood Shopping Plaza into Northwood Commons near Morgan State University and is turning a former Eddie’s Market into another Streets food store in Charles Village.

Scott returned the favor by placing Bramble on his workforce and neighborhood development transition team.

Local developers not unknown by the upper echelons of City Hall.

Council President Nick Mosby, who also sits on the Board of Estimates, picked up $7,000 from Bramble when he was 7th District councilman and $1,000 more from Renbaum. Today Mosby abstained from the otherwise unanimous vote approving the air rights sale.

Through his 6300 York Road Shopping Center LLC, Renbaum contributed the maximum $6,000 to Henry during his successful 2020 race for comptroller against incumbent Joan Pratt.

Prior to that, the developer donated at least $4,750 to Henry when he was a 4th District councilman.